Prithviraj III (1149-1192 CE), also known as Prithviraj Chauhan, was a Hindu king who ruled the kingdoms of Ajmer and Delhi in northern India during the second half of the 12th century. 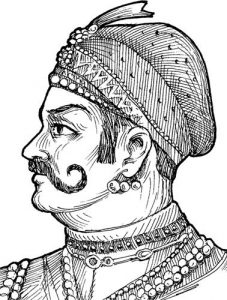 Before Hemu, Prithviraj Chauhan was the last independent Hindu king to sit on the throne of Delhi. He was a member of the Rajput Chauhan clan. At the age of 20, he ascended to the throne and ruled from the twin capitals of Ajmer and Delhi. His maternal grandfather Anangpal III of the Tomara dynasty in Delhi gave him Delhi. He unified the Rajputs against Muslim invasions and controlled much of what is now Rajasthan and Haryana. His elopement with Samyukta (Sanyogita), the daughter of Jai Chandra Rathod, the Gahadvala king of Kannauj, in 1175 is a popular romantic tale in India, and it is one of the subjects of the Prithviraj Raso, an epic poem composed by Chauhan’s court poet and friend Chand Bardai. 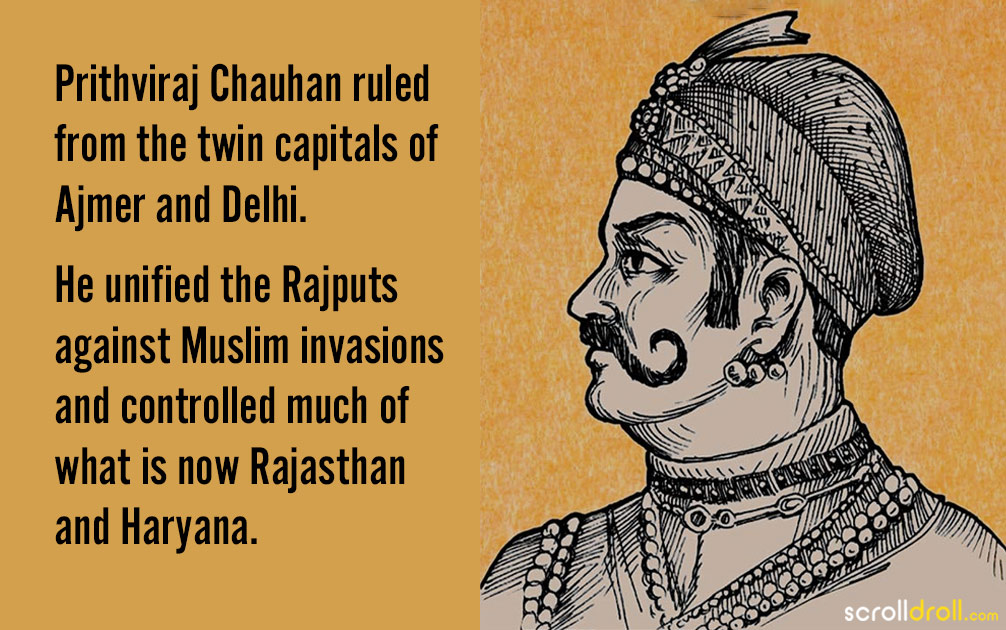 Prithviraj Chauhan is widely regarded as a courageous Indian king who stood up to Muslim rulers. Prithviraj began to show signs of his greatness at a young age. He was a brave and intelligent child with exceptional military abilities. He could hit targets accurately even as a small child based solely on their sounds. He went on several campaigns to expand his territory as king, and he earned a reputation as a valiant and courageous warrior. Particularly well-known are his battles with Shahabuddin Muhammad Ghori.

Prithviraj III was born on the 12th day of Jyeshtha, the Hindu calendar’s second month, which corresponds to May – June on the Gregorian calendar, according to the famous eulogistic Sanskrit poem ‘Prithviraja Vijaya.’ The author of ‘Prithviraja Vijaya’ does not specify the year of his birth. It does, however, mention some planetary positions at the time of Prithviraj’s birth. The description of these planetary positions later assisted Indian Indologist Dasharatha Sharma in determining Prithviraj’s birth year, which is thought to be 1166 CE. In modern-day Gujarat, he was born to Chauhan King Someshvara and his queen, Karpura Devi.

Prithviraj was well educated and knew six languages, according to ‘Prithviraja Vijaya’. He was also a skilled archer, according to the report. He possessed the ability to hit a target solely based on its sound. 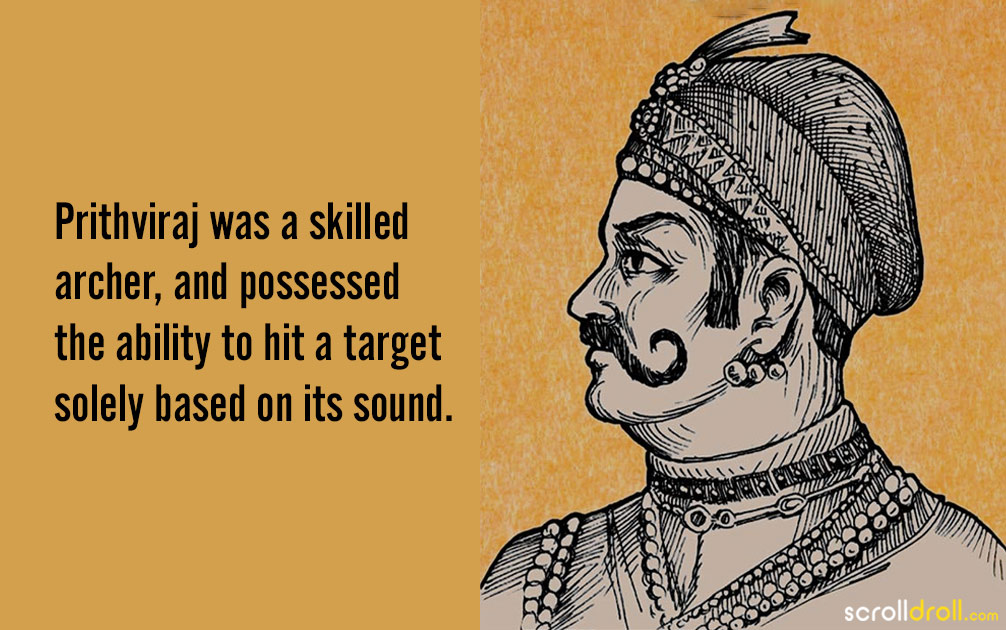 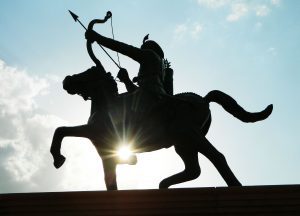 After his father, Someshvara, died in 1177 CE, Prithviraj ascended the throne when he was only 11 years old. Prithviraj, who was still a minor at the time, ascended the throne with the help of his mother, who served as regent. After hearing about his bravery and courage, his grandfather Anangpal, the ruler of Delhi, declared him heir to the throne. As a result, Prithviraj ruled from both Ajmer and Delhi.

Conflicts With Rulers Of Other Kingdoms

Many Hindu rulers attempted to exert influence over the Chahamana dynasty in 1180, and Prithviraj Chauhan was challenged. Nagarjuna, one of his cousins, had revolted against Prithviraj Chauhan’s coronation. Nagarjuna had taken the fort of Gudapura in an attempt to exact revenge and demonstrate his authority over the kingdom. By besieging Gudapura, Prithviraj demonstrated his military prowess. It was one of Prithviraj’s earliest military victories. The struggle for the Chahamana throne had led to a rivalry between the two branches of the family, and Nagarjuna was the son of Prithviraj’s uncle Vigraharaja IV.

After putting down his cousin Nagarjuna’s rebellion, Prithviraj turned his attention to the Bhadanakas, a neighboring kingdom. Prithviraj decided to annihilate the nearby kingdom of Bhadanakas because they threatened to capture the area around present-day Delhi, which belonged to the Chahamana dynasty.

Prithviraj defeated Paramardi, a powerful Chandela king, in 1182 CE. Prithviraj increases the number of enemies he has after this victory. He also fought the Gujarati Chalukyas and the Kannauji Gahadavalas. Gahadavala kingdom was ruled by Jayachandra. He was also a formidable ruler. Prithviraj married Jayachandra’s daughter Samyogita (Samyukta) on the spur of the moment. 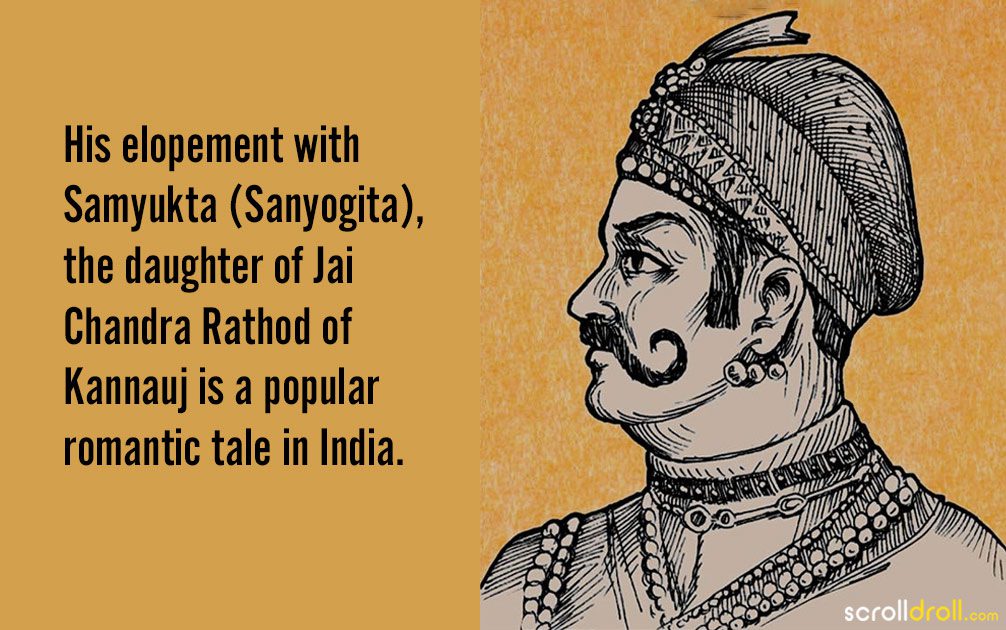 After conquering Tabarhindah, Muhammad’s original plan was to return to his base, but when he heard about Prithviraj’s march, he decided to fight back. He set out with an army in 1191 CE and met Prithviraj’s forces at Tarrain. The Ghurids were defeated decisively by Prithviraj’s army in the subsequent battle. Muhammad of Ghor was wounded and had to flee. 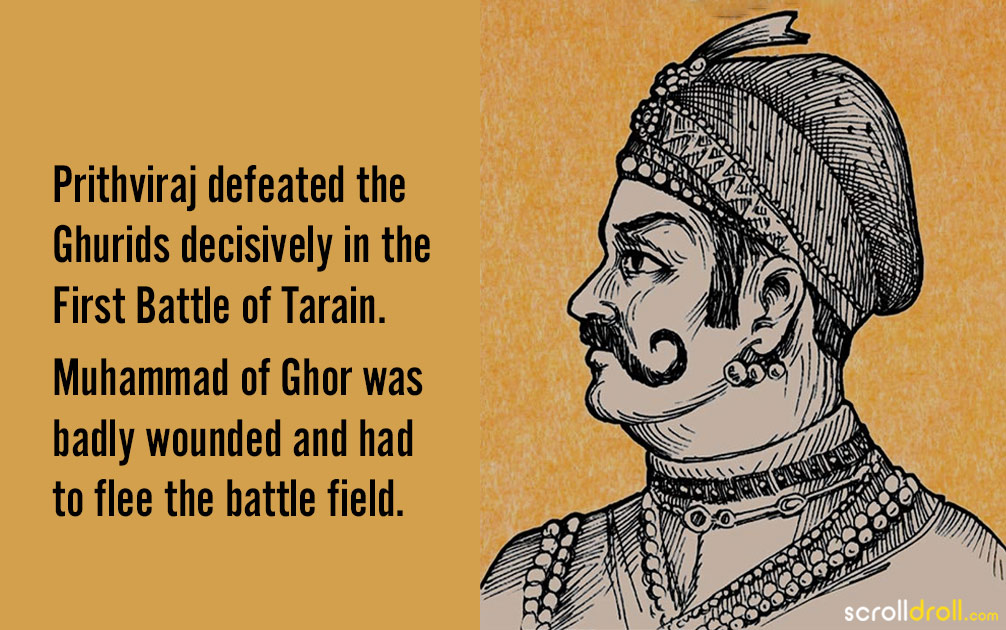 Not wanting to invade the hostile territory or misjudge Ghori’s ambition, Prithviraj did not pursue the retreating Ghurid army. He only besieged Tabarhindah’s Ghurid garrison, which surrendered after a 13-month siege.

Muhammad of Ghor returned to Ghazna after losing the first battle of Tarain and made preparations to avenge his defeat. Over the next few months, he gathered a well-equipped army of 120,000 Afghan, Tajik, and Turkish horsemen. He then marched towards the Chahamana kingdom in 1192, aided by Vijayaraja of Jammu, via Multan and Lahore. 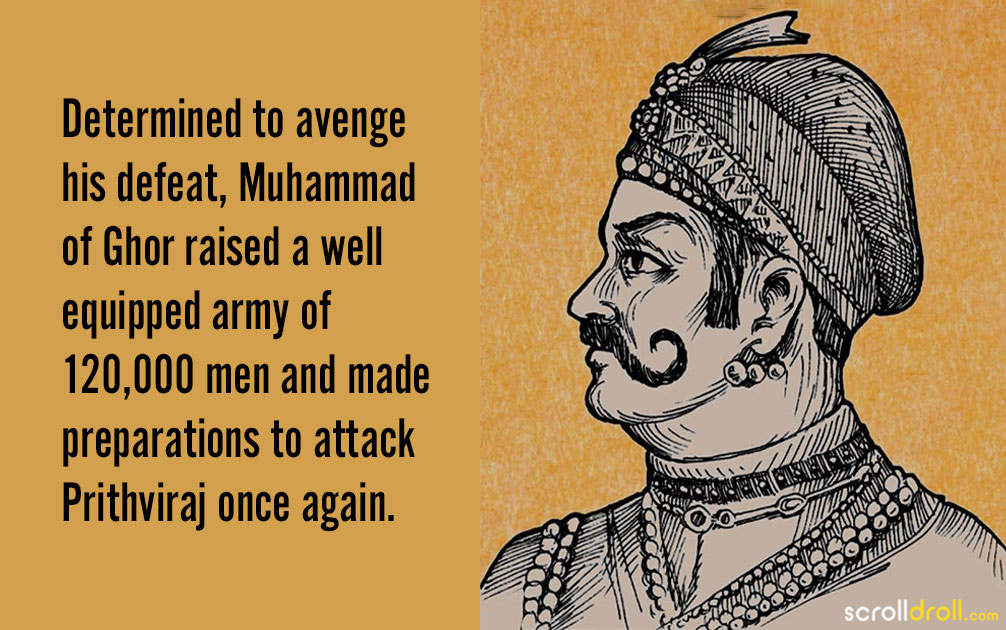 Because of Prithviraj’s conflicts with Hindu rulers, most of his Rajput allies had deserted him when Muhammad of Ghor returned to avenge his defeat. Despite having an impressive army, Prithviraj managed to put up a good fight. 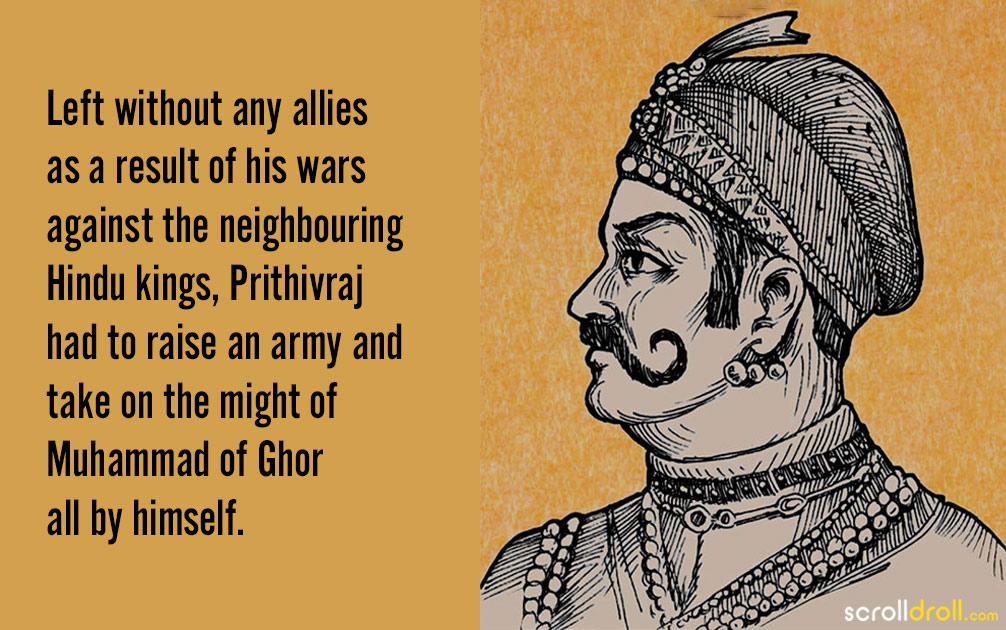 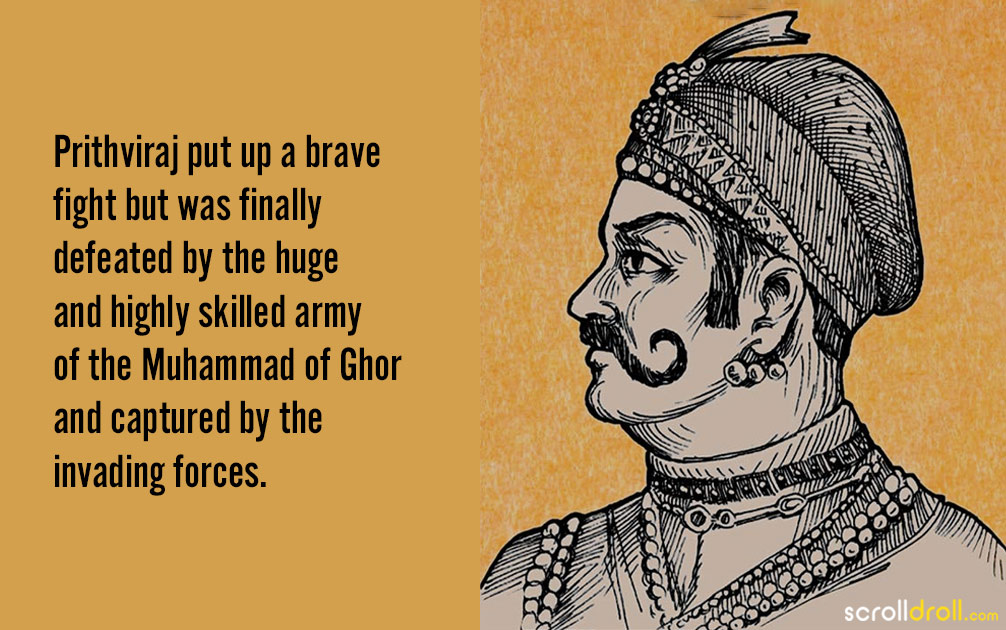 Prithviraj Chauhan was captured after being defeated. His eyes were burned with red-hot irons, and he was blinded as a result of his treatment. Prithviraj, on the other hand, did not lose heart. He is said to have killed Mahmmad of Ghor with his “shabdabhedi baan” with the help of his court poet and friend Chand Bardai. His ability to hit the target solely based on the sound it makes came in handy, and he demonstrated it during an archery competition hosted by Mahammad of Ghor. When Mahmmad of Ghor complimented him, he recognized him and attacked him. Ghor’s Mahammad was assassinated. He and his friend Chand Bardai stabbed each other to avoid death at the hands of their enemies. 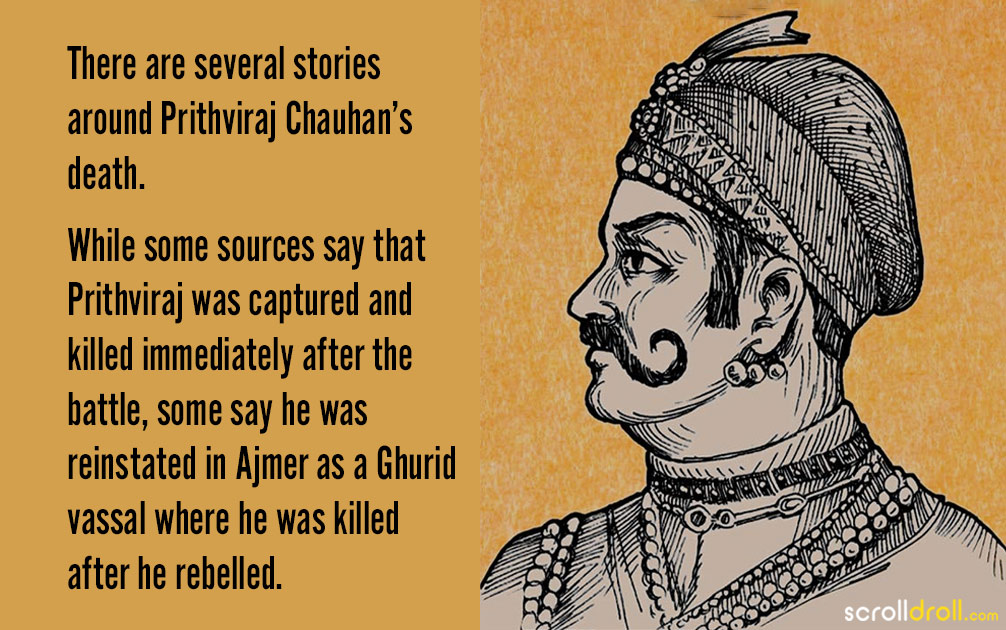 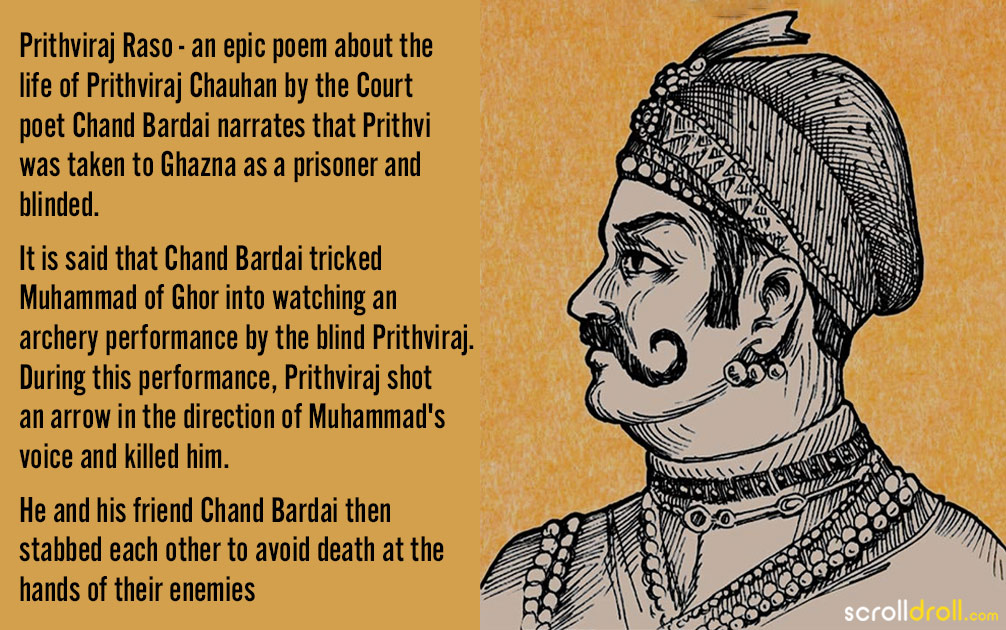 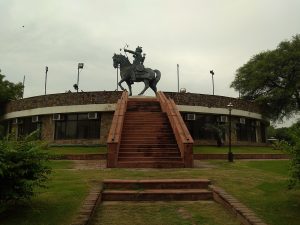 Prithviraj Chauhan’s empire stretched from the Himalayan foothills in the north to the foothills of Mount Abu in the south at its peak. From the Betwa River to the Sutlej River, his empire stretched east to west. His empire included what is now Rajasthan, western Uttar Pradesh, northern Madhya Pradesh, and southern Punjab. Following his death, Prithviraj Chauhan was widely portrayed as a powerful Hindu king who had kept Muslim invaders at bay for many years. He’s also frequently depicted as a symbol of Indian power prior to the establishment of Islamic rule in medieval India. 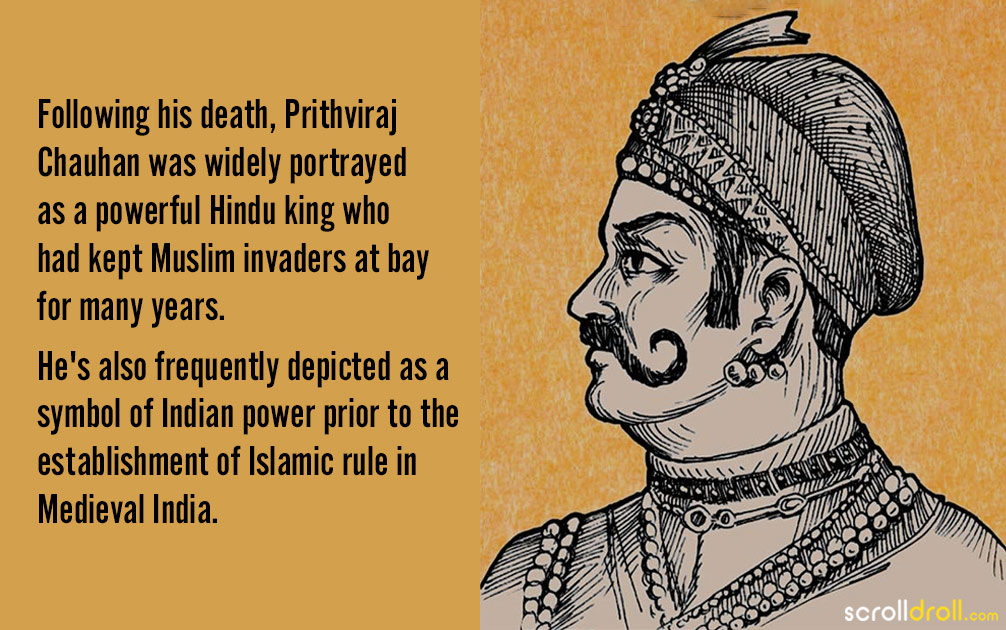 It’s important to note that the exact date and manner of his death are unknown. According to many medieval sources, Prithviraj was taken to Ajmer by Muhammad of Ghor and kept as a Ghurid vassal. After a brief rebellion against Muhammad of Ghor, Prithviraj Chauhan was executed for treason. The ‘horse-and-bullman’ style coins, which have the name Prithviraj on one side and “Muhammad bin Sam” on the other, support this theory.

The exact cause of Prithviraj Chauhan’s death differs depending on who you ask. According to Hasan Nizami, a Muslim historian, Prithviraj Chauhan was caught plotting against Muhammad of Ghor, allowing the king to behead him. The nature of the conspiracy has not been described by the historian.

Prithviraja-Prabandha claims that Prithviraj Chauhan kept the building that was close to the court and the room of Muhammad of Ghor. Prithviraj Chauhan had asked his minister Pratapasimha to provide him with a bow and arrows so that he could kill Muhammad. Minister not only granted his wish and gave him the weapons, but he also informed Muhammad of Prithviraj’s secret plan to assassinate him. Later, Prithviraj Chauhan was kidnapped and thrown into a pit, where he was stoned to death.