Panic and chaos have ensued in the Indian city of Joshimath which is sinking at a dangerously rapid rate of 6.5 cm per year. It has sunk at an alarming rate of 5.4 cm in 12 days. This sinking- scientifically and geographically known as land subsidence is occurring due to various reasons. Localites first noticed the cracks on their house walls in the winter of 2021. However, it’s only now that the government has started looking into the matter and taking steps for the safety and rehabilitation of the people of Joshimath. Why is Joshimath important and what are the causes behind the sinking of this culturally rich city? Let’s take a look at some interesting facts about Joshimath that will give us a better insight into the situation.

Joshimath is a city in the Chamoli district of Uttarakhand. It is located at a great elevation of 6150 m. Its location along the foothills of the Himalayas in Uttarakhand offers the city a very “fragile landscape” existing on a thick slab of landslide material. 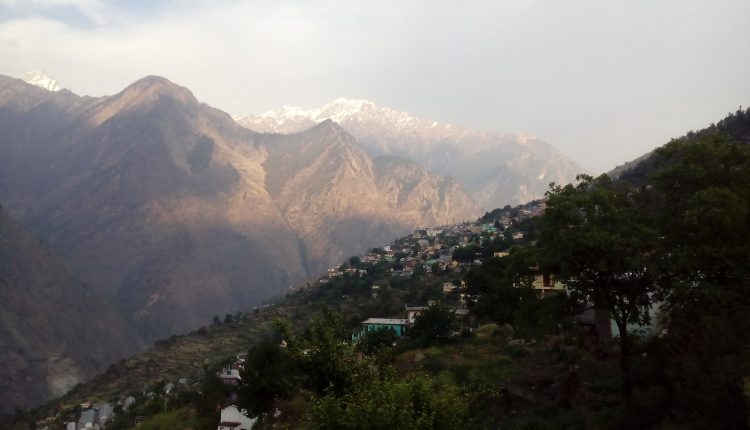 As seen before the name of the city itself holds a lot of religious significance. The idol of lord Badri is brought down to Vasudeva temple in Joshimath from Badrinath every winter to facilitate easier worshipping. It is a gateway to the famous Hindu pilgrimages to Kedarnath and Badrinath.  Not only that but it is also home to many temples that hold a very important place in Hindu mythology. Adi Shankaracharya, a Hindu philosopher, theologian and Guru also established one of his four main religious institutions here. Thousands of devotees stay at Joshimath to pay visits to these holy places and gain spiritual bliss.

A permanent military station, located in Joshimath for the Garhwal Scouts of the Indian army is known as the Joshimath Cantonment. It serves an important function since it is closer to the Indo-Tibetan border.

Along with being flooded by devotees all year long, Joshimath also offers exciting opportunities to tourists for exploring the scenic beauty of Uttarakhand. It is a gateway to various treks, expeditions and camps in the Himalayas. It houses amazing hotels and resorts that present tourists with thrilling winter adventure sports like skiing and snowboarding.

It all started in the October of 2021 when residents of Joshimath noticed minor cracks on the walls of their house. These cracks gradually started expanding leading to huge gaps in the landscape of Joshimath causing damage to residential and other army buildings in the city. A study conducted in August 2022 by geological experts has rendered some houses and buildings completely uninhabitable, making the city a danger zone and forcing citizens to flee.

According to reports, the cracks recorded recently are much wider than the ones recorded in the past and this could be due to the 2021 floods in Uttarakhand that had a serious impact on Joshimath. The geographic location of the city makes it susceptible to earthquakes, landslides, and floods but is that the only reason why Joshimath is in such a predicament? Despite a report by the Mishra Committee in 1976 explaining and warning officials that heavy projects should not be undertaken in Joshimath owing to its shaky foundation,  several development projects have been established in the area. This might have aided and accelerated the sinking process of the holy city of Joshimath.

As of now, the government has taken up rehabilitation measures to ensure the safety of the people and has taken the initiative of shutting down heavy projects established in the area. ISRO released satellite images of the alarming condition that Joshimath is in and the images only make us hope for the best. Our prayers are with the people of Joshimath!

Also read: Important Facts About Sammed Shikharji Everyone Must Know

15 Top Fashion Magazines In The World- A Must Read List