Mohandas Karamchand Gandhi, also known as Mahatma Gandhi, was born in Porbandar, Gujarat, on October 2, 1869. It is one of India’s officially declared national holidays, and it is observed in all of the country’s states and territories. Here are 15 interesting facts about Mahatma Gandhi that we have unearthed.

1. He was given the honorific title ‘Mahatma’ by Rabindranath Tagore.

Mahatma Gandhi was born Mohandas Karamchand Gandhi on October 2, 1869. His father’s name was Karamchand. In 1914, he was given the honorific title Mahatma by Rabindranath Tagore, which means “Great Soul.” 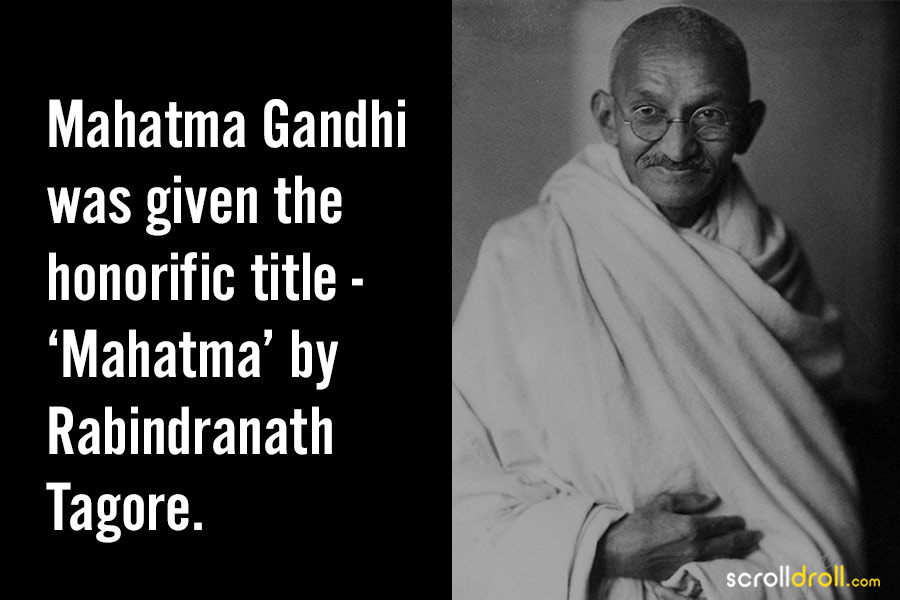 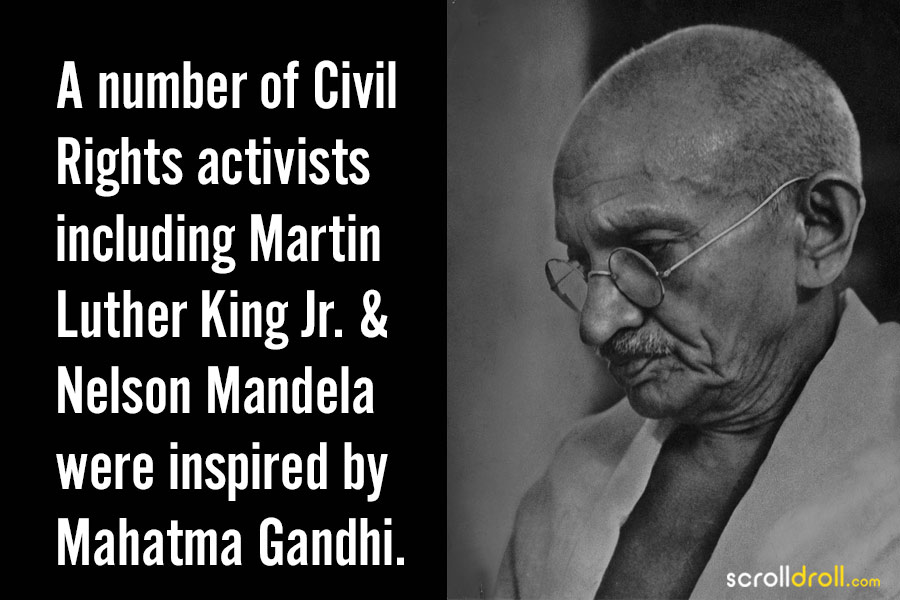 3. Mahatma Gandhi was first referred as ‘The Father of the Nation’ by Subhash Chandra Bose

It is believed that Gandhi was addressed as “The Father of the Nation” for the first time on a radio address (on Singapore radio) by Subhash Chandra Bose on 6 July 1944.

While Mahatma Gandhi has been popularly called the “Father of Nation”, it has to be noted that Indian Constitution prohibits conferring titles other than military and academic distinctions by the State. 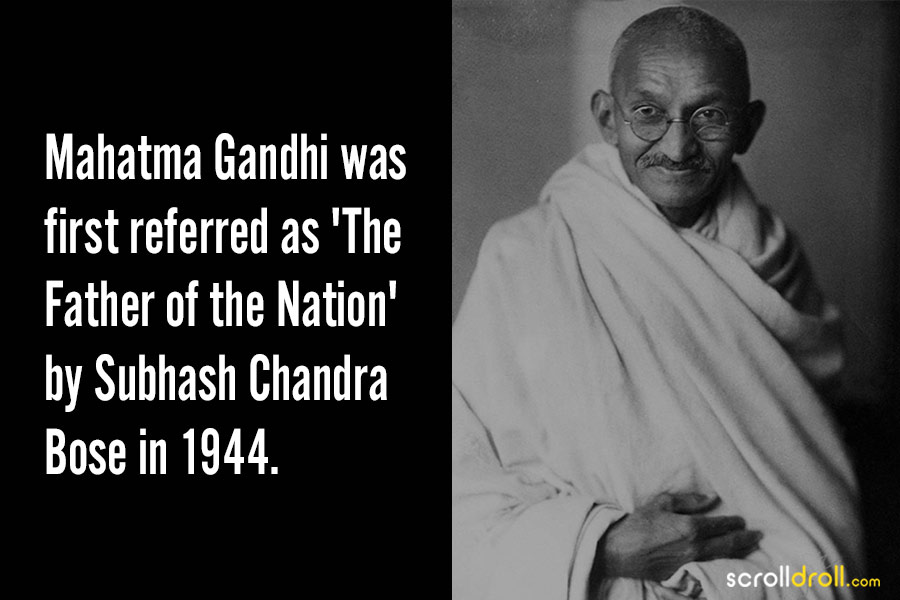 4. Great Britain honored Mahatma Gandhi with a stamp on his centenary year – 1969

Great Britain, the country against which he fought for India’s independence, honored him with a stamp 21 years after his death. This was the first occasion when  Great Britain issued a stamp to commemorate a foreign citizen (non-British) 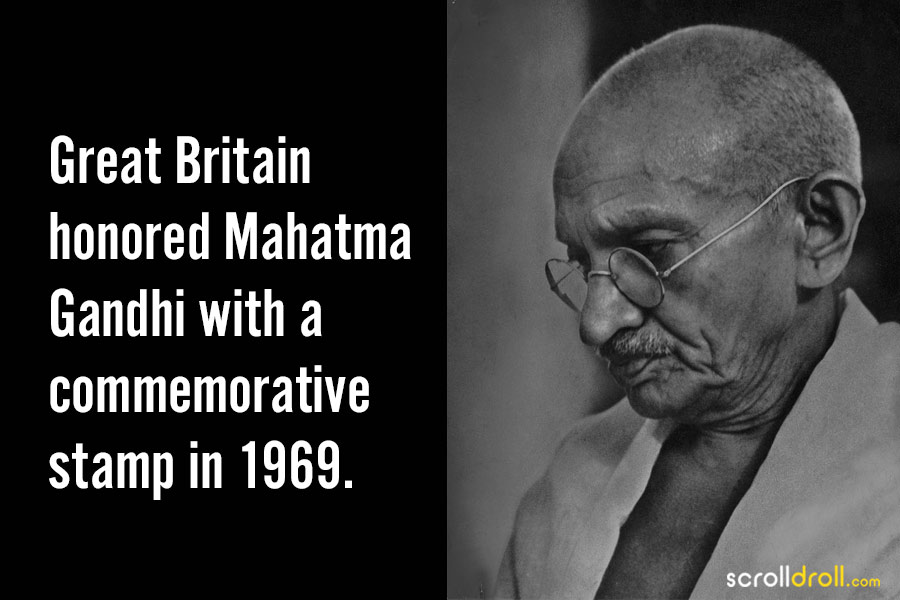 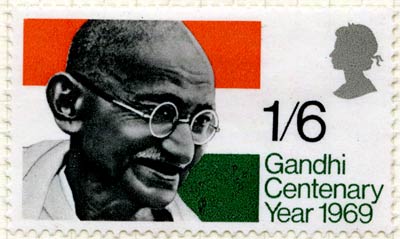 5. One of Gandhi’s favorite pastimes as a child was twisting dogs’ ears.

Raliatbehn – Gandhi’s sister described him as “restless” as a child. His favorite pass time was twisting dogs’ ears. 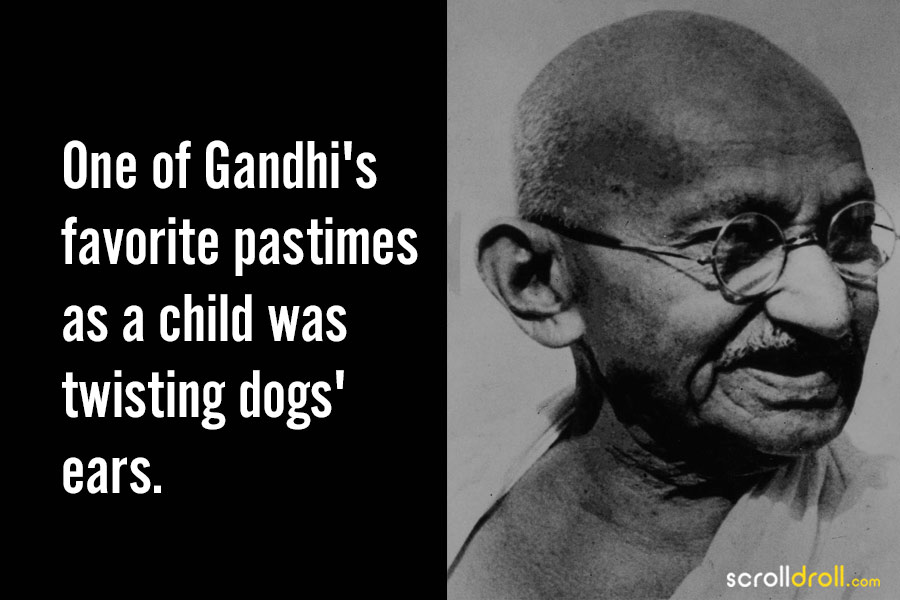 6.  The first satyagraha movement led by Mahatma Gandhi in British India was in Champaran (Bihar) in 1917.

Mahatma Gandhi joined Indigo farmers protesting against the British government’s heavy-handed actions that having to grow indigo with barely any payment for it. 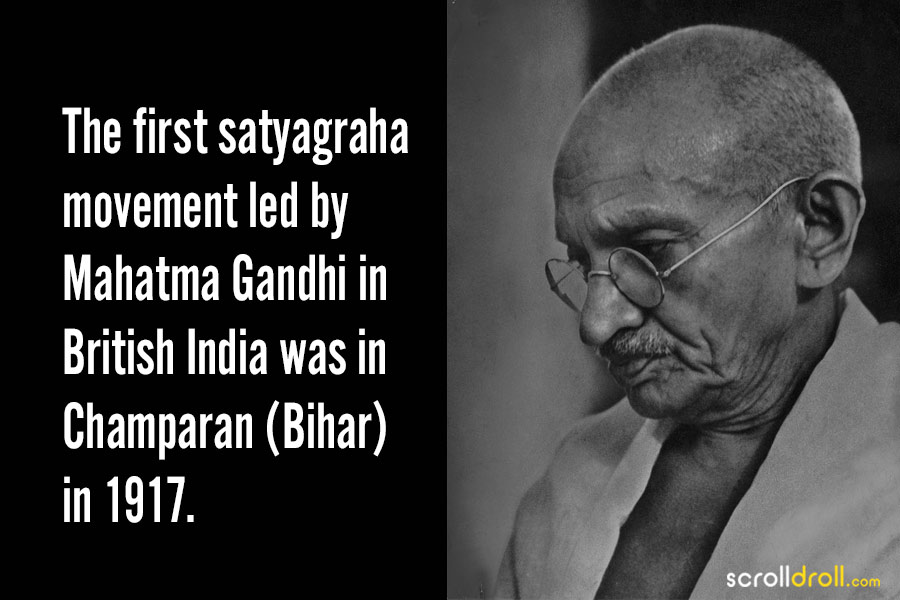 Gandhi’s political views, ethics and method of non-violence were all shaped in South Africa where he witnessed rampant discrimination against people of Indian origin and the blacks by the ruling Whites. 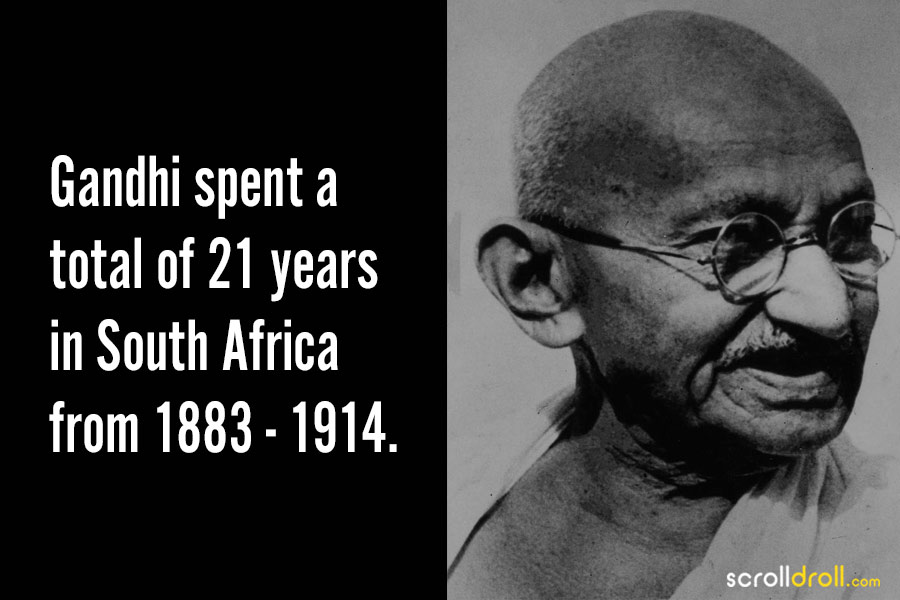 8. Gandhi’s birthday is observed as “the International Day of Nonviolence.” 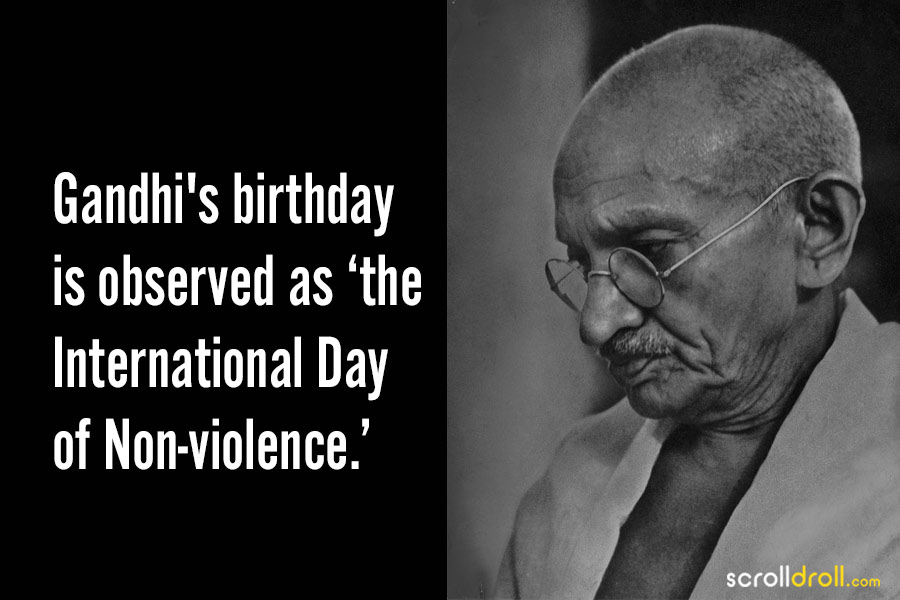 9. Gandhi’s funeral was attended by over 2 Million People

Gandhi’s death was mourned all over the globe. Over 2 million people joined the five-mile-long funeral procession of Mahatma. 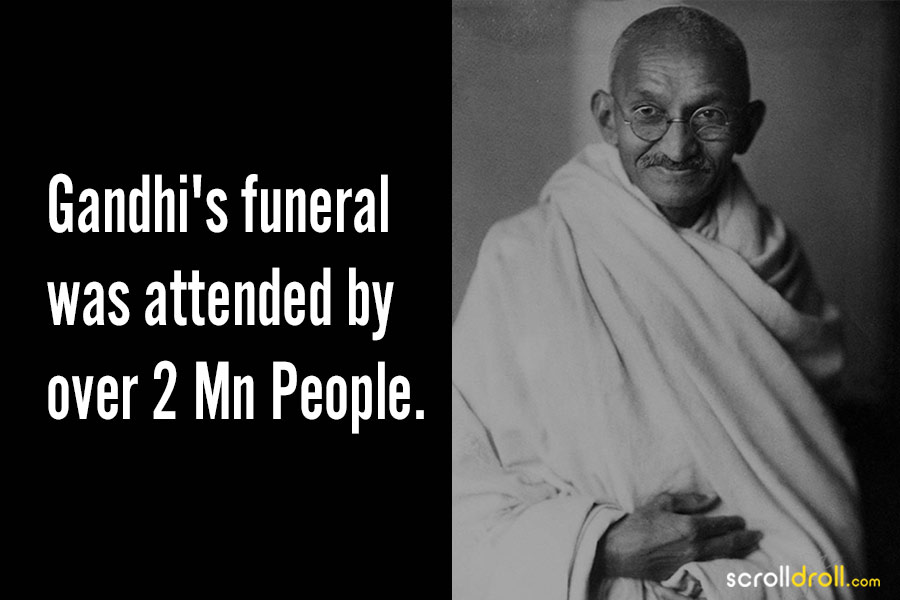 Gandhi and Leo Tolstoy, a Russian author, exchanged letters. Both the author and the activist came from aristocratic families, and they both advocated for social equality.

In his first letter, Gandhi explained the religious obligations and state laws that Indians in the South African province of Transvaal faced, and he asked Tolstoy to express his moral views. During his 1909 imprisonment, Gandhi read Tolstoy’s works. However, Tolstoy’s “The Kingdom of God is Within You” influenced him the most, encouraging him to seek religious truth in Hinduism. After that, Gandhi bought Tolstoy Farm near Johannesburg and named it after Tolstoy. 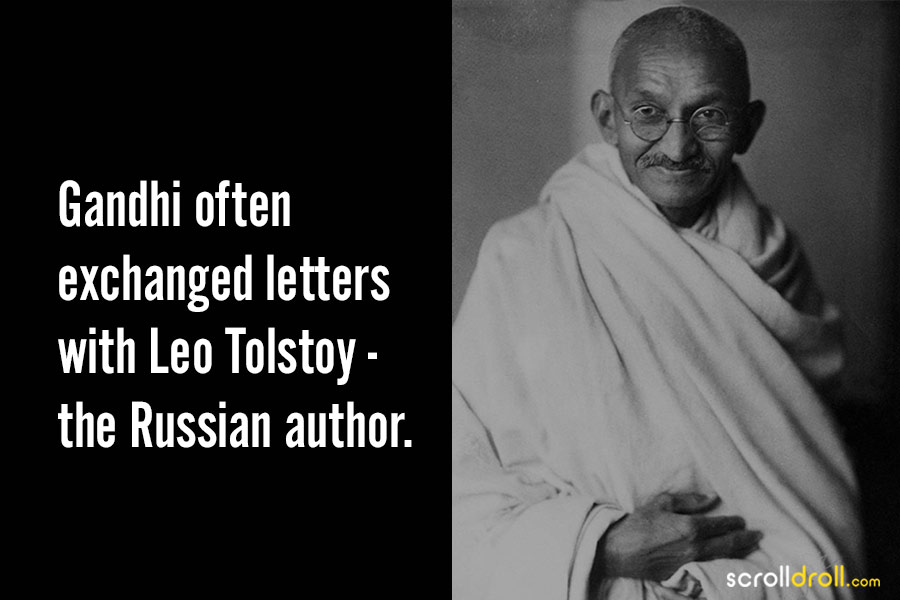 11. There are three temples in India dedicated to Mahatma Gandhi

Indians are known to build temples for people who are held in high reverence and the case isn’t much different with Mahatma Gandhi.

The temples dedicated to Mahatma Gandhi in India are located in Sambalpur (Odisha),  Nidaghatta village in Chikmagalur (Karnataka) and Chityal, Nalgonda, (Telangana). 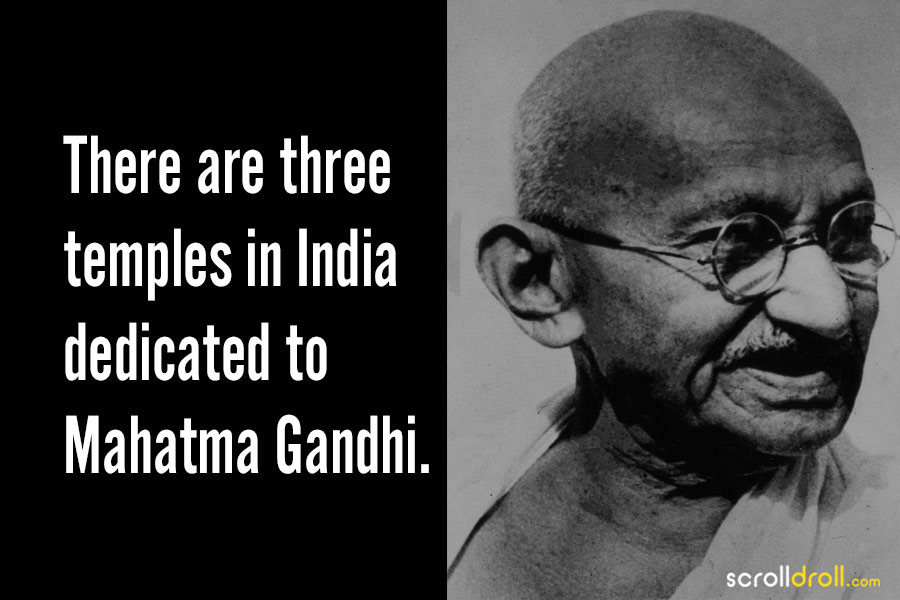 12. In the Time Magazine’s list of ‘The Most Important People of the Century ‘ published in 1999, Gandhi was named second after Albert Einstein

Interestingly, Albert Einstein who was named ‘Person of the Century’ by Time Magazine had one described Gandhi as, “the greatest man of our age.” The Magazine named Gandhi as one of the top 25 political icons of all time in 2011. 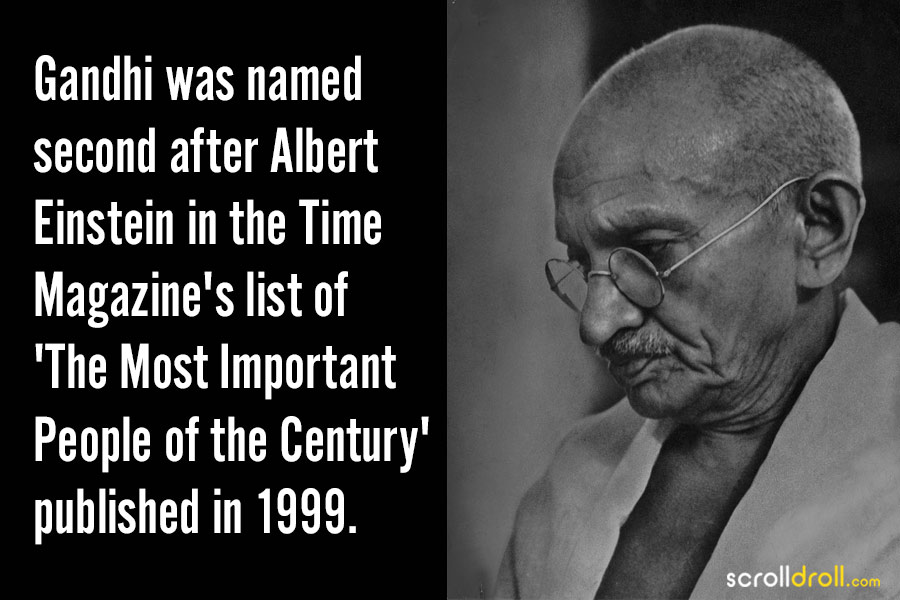 Gandhi was a football fanatic and founded three football clubs, all named ‘Passive Resisters Soccer’ during his time in South Africa.

The team comprised Indian-origin players who promoted Satyagraha and collected funds for families of Indian “resisters” – those imprisoned for raising their voices against racism and violence. 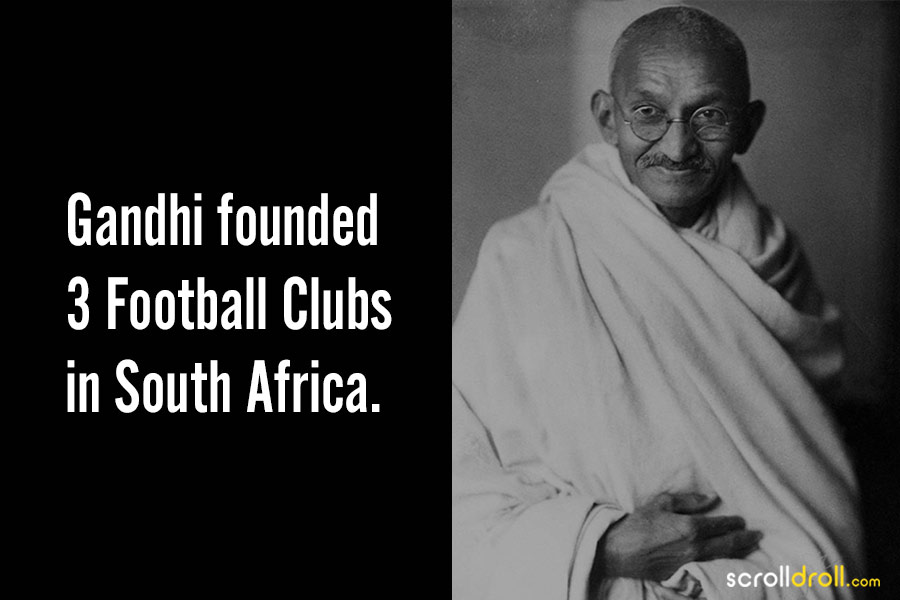 Gandhi wrote two letters to Adolf Hitler referring to him as a “Dear Friend” and pleaded with him to end the war. However, due to the British government’s intervention, it never made it to Hitler

As tensions in Europe rose following Germany’s occupation of Czechoslovakia, Gandhi addressed a letter to Hitler just a few months before World War II started. Germany invaded Poland a month later. Gandhi responded with a second letter during the War, this time explaining his own position on British Imperialism. He claimed that Hitler and himself had taken very different approaches to protest, namely, violence and nonviolence.

However, due to the British government’s intervention, none of the letters made it to Hitler

You can read the letters here 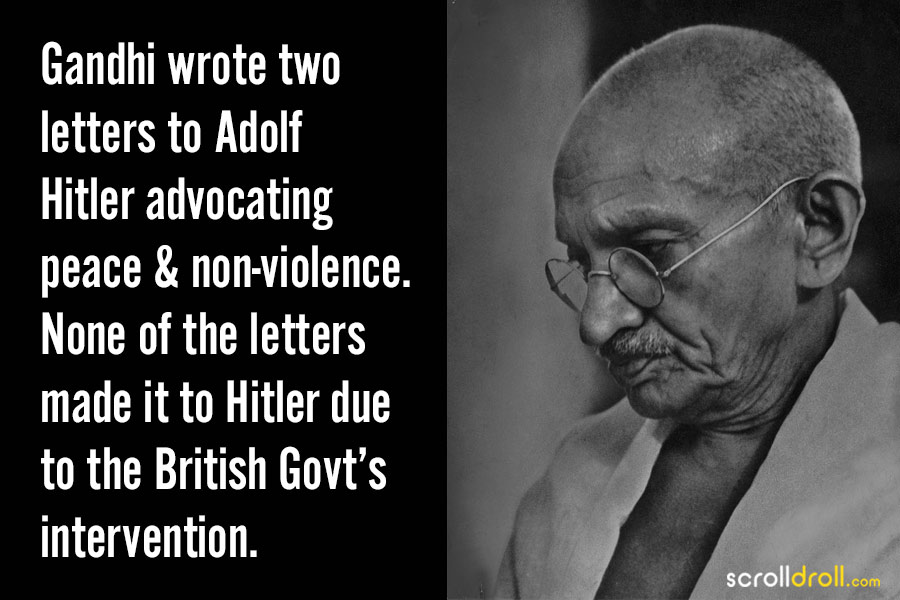 15. Gandhi was nominated five times for the Nobel Peace Prize but never won. .

Later members of the Nobel Committee publicly regretted this, as it was one of the strongest symbols of nonviolence in the twentieth century. He was nominated for the prestigious prize in 1937, 1938, 1939, and 1947, and a few days before his assassination in 1948. 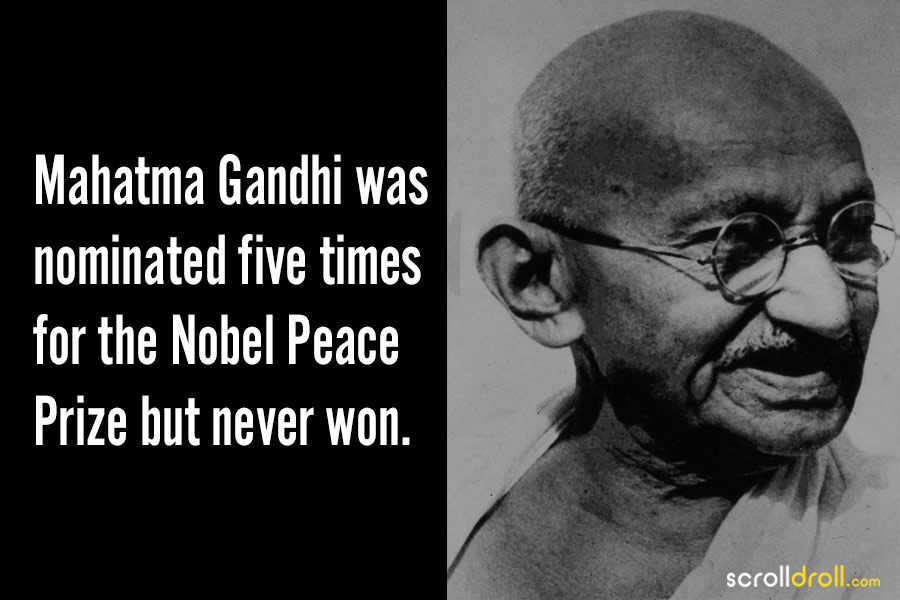 Gandhi’s teachings of non-violence and love influenced the world and served as an inspiration for people fighting against oppression, racism, and the vices of society. Did we miss out on any other really interesting facts about Mahatma Gandhi? Do let us know in the comments below!