More often than not, incidents of immense valour and unimaginable sacrifice are all but forgotten within a matter of years – time passes, memory fades. However, some heroes ought to be remembered, and if they’re forgotten, we must remind ourselves of them again. Which is why we bring you the story of Havaldar Hamid – the army hero who destroyed several enemy tanks singlehandedly in the Battle of Asal Uttar during the Indo-Pak war of 1965 and was awarded the Param Vir Chakra (PVC).

Also read: The Story Of Baba Harbhajan Singh Of Nathu La – A Soldier On Duty Even After Death

Abdul Hamid is remembered as one of the bravest martyrs from the Indo-Pak war of 1965. He was involved in the battle of Asal Uttar – one of the largest tank battles fought during the war. 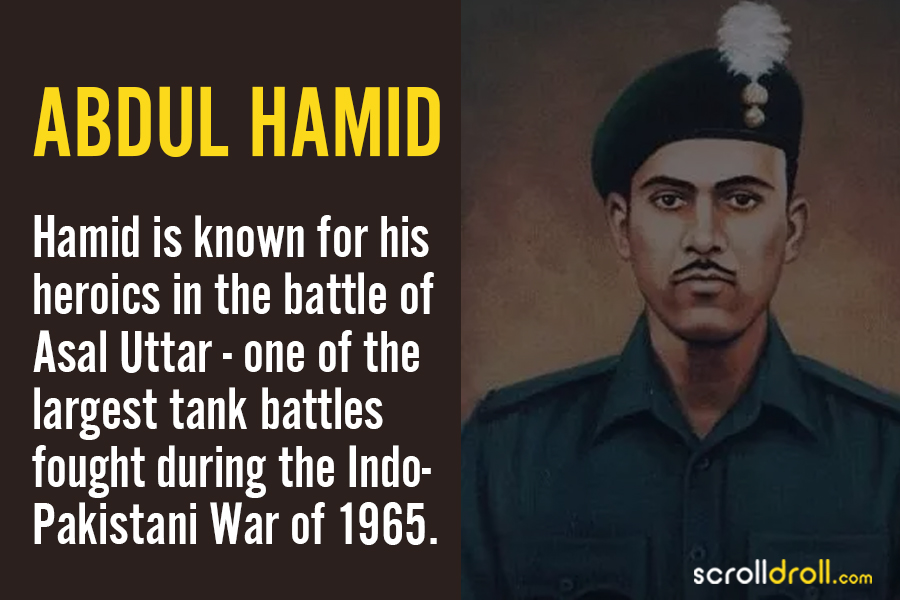 In fact, so enormous was the extent of the fight that it is considered to be one of the largest tank battles in history since the battle of Kursk in World War II. 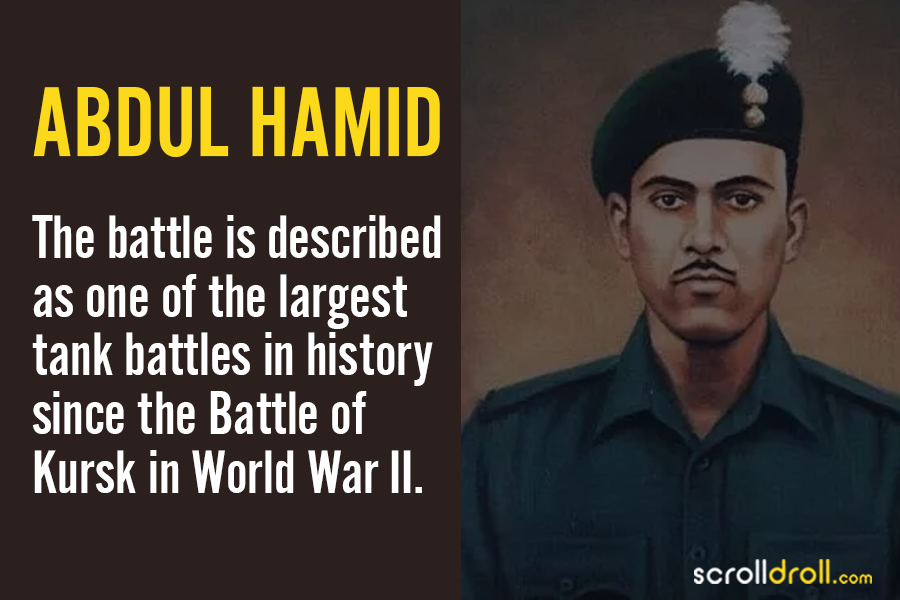 Born in the village of Dhamupur in Ghazipur district to a tailor’s family, Abdul Hamid was one of six children. Growing up, he’d help his father stitch clothes. As soon as he was 20, Hamid decided to join the Indian Army in 1955. After adequate training at the Grenadiers Regimental Centre at Nasirabad, Hamid was posted to 4 Grenadiers. 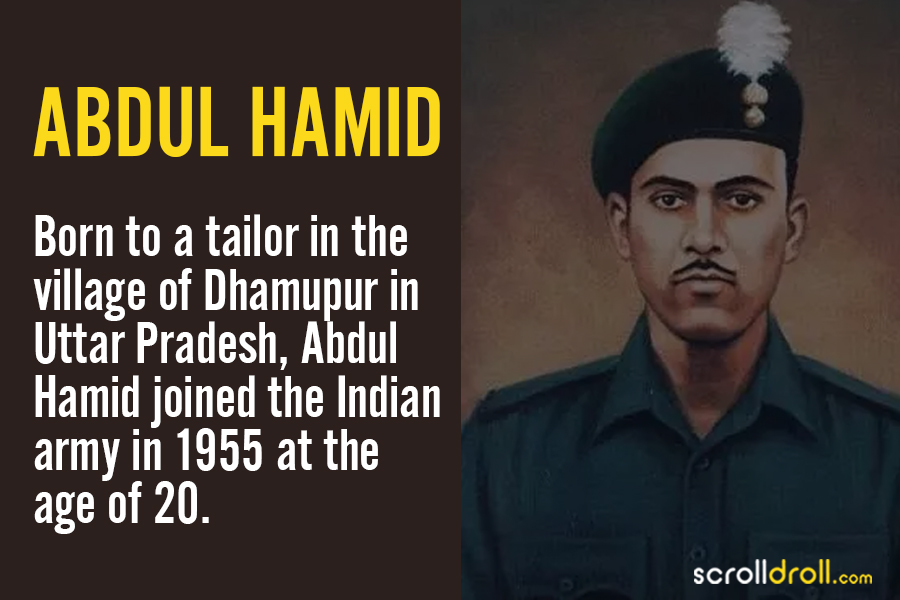 At first, Abdul was posted to the Grenadiers regiment. However, he later joined the 4th battalion, which he served till the end of his life. 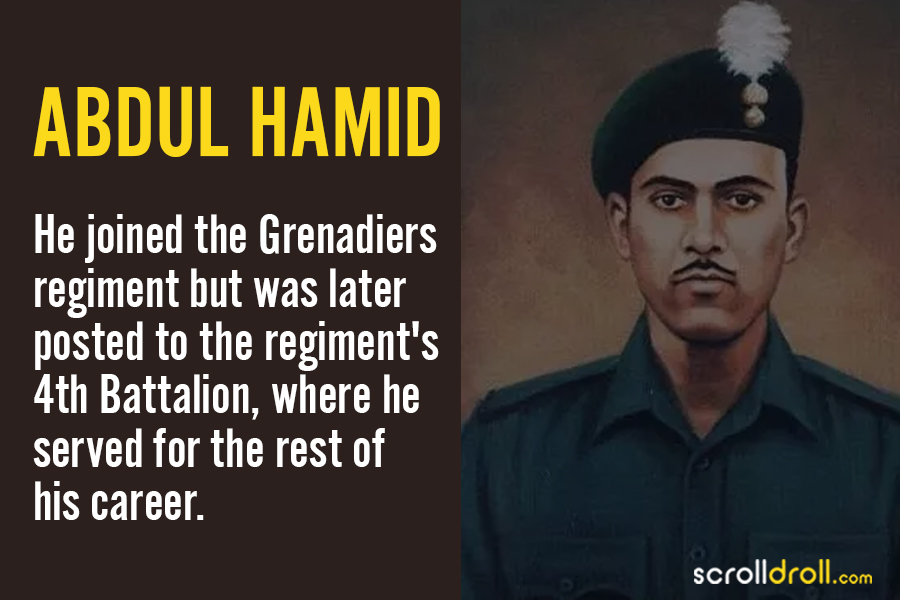 Initially, Hamid was part of a rifle company, and by the time his last call came, he had already fought in the 1962 war in Thang La during the Sino-India war. After the ceasefire, Hamid’s unit was transferred to Ambala where he was made Company Quarter Master Havildar, making him Havaldar Hamid. 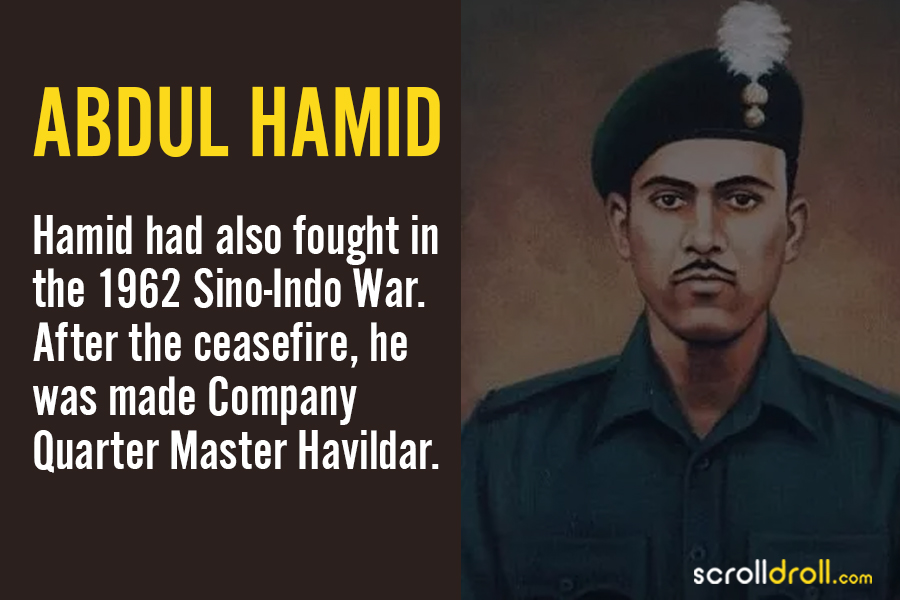 In 1965, war again broke out between India and Pakistan after Pakistani troops infiltrated the Indian borders and attempted to begin an insurgency in Kashmir. By this time, Hamid had already served the army for 10 years. At that time, he was serving the 4th Grenadiers.

Hamid’s battalion was tasked with holding a strategically important area near Chima village on the road to Punjab and were asked to stopping the enemy troops near the village of Asal Uttar in Punjab. Later on, due to the lack of anti-tank detachment commanders, Hamid was asked to handle an anti-tank detachment. 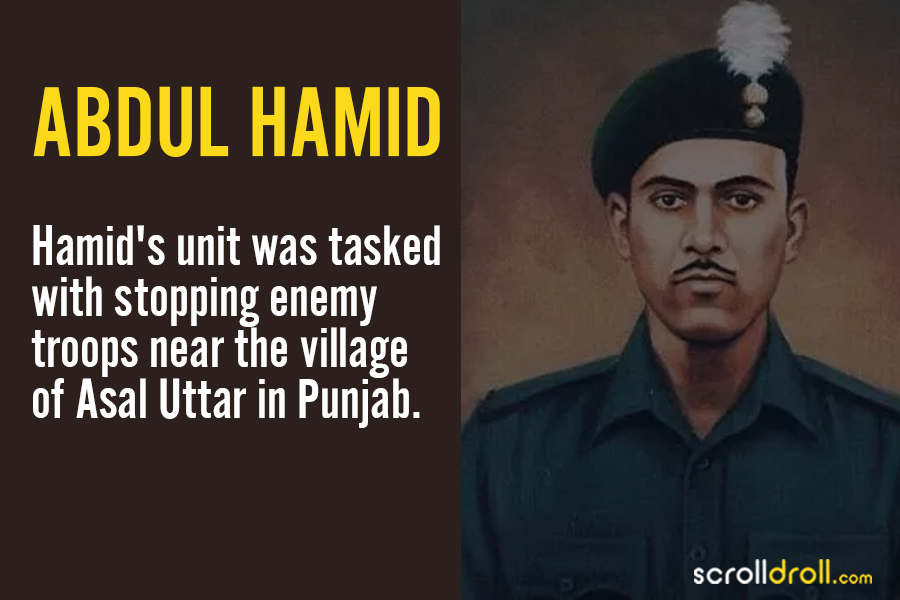 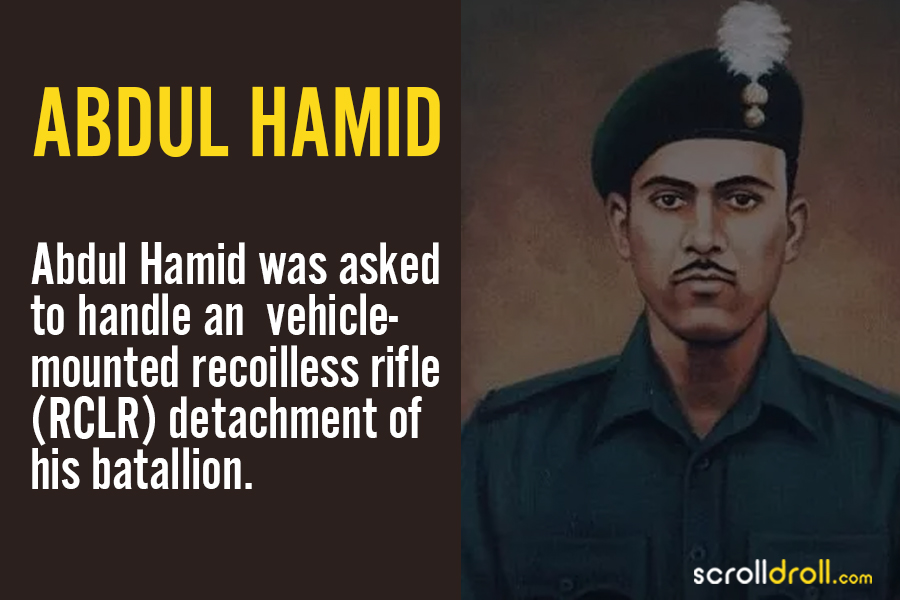 On the day of 8th September, enemy troops attacked the Grenadiers relentlessly, but were met with equal force. Hamid found himself mounted on a jeep when the enemy tanks reached a shooting distance. He fired at the tanks, and the one he hit shot up in flames. 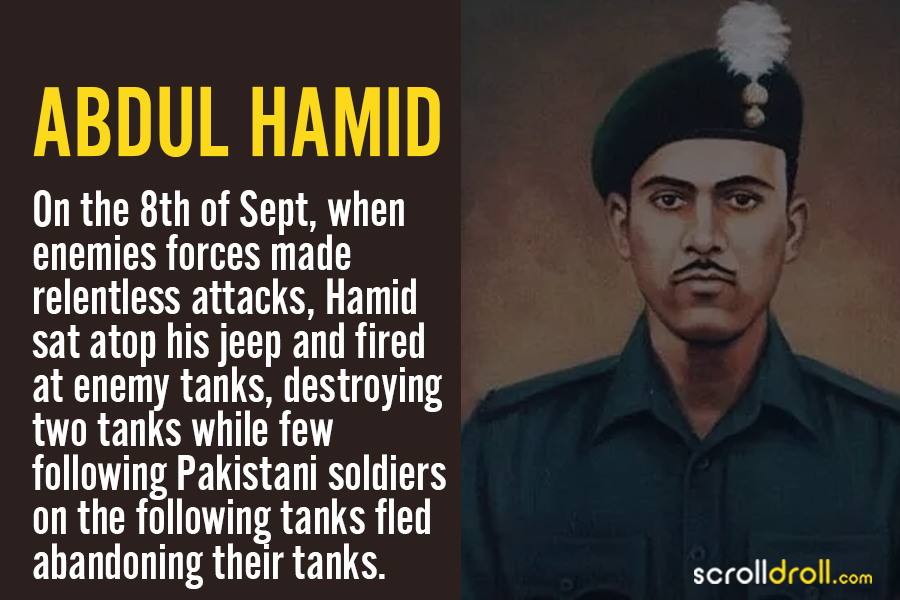 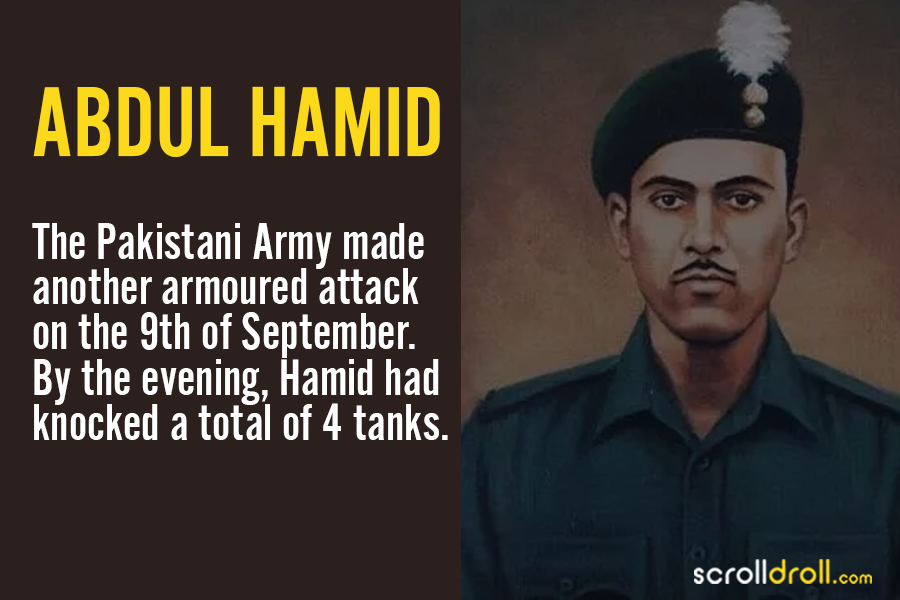 In the morning of 10th September, Pakistani tanks attacked the 4th Grenadier positions again. Hamid could see 6 tanks coming the way of his men. He impulsively hopped on to a jeep and drove towards the tanks. Even though he was being fired at from all directions, Hamid kept his cool and destroyed the leading tank first, and then moved on to destroying one more. Because of his open jeep, he was vulnerable to shelling. 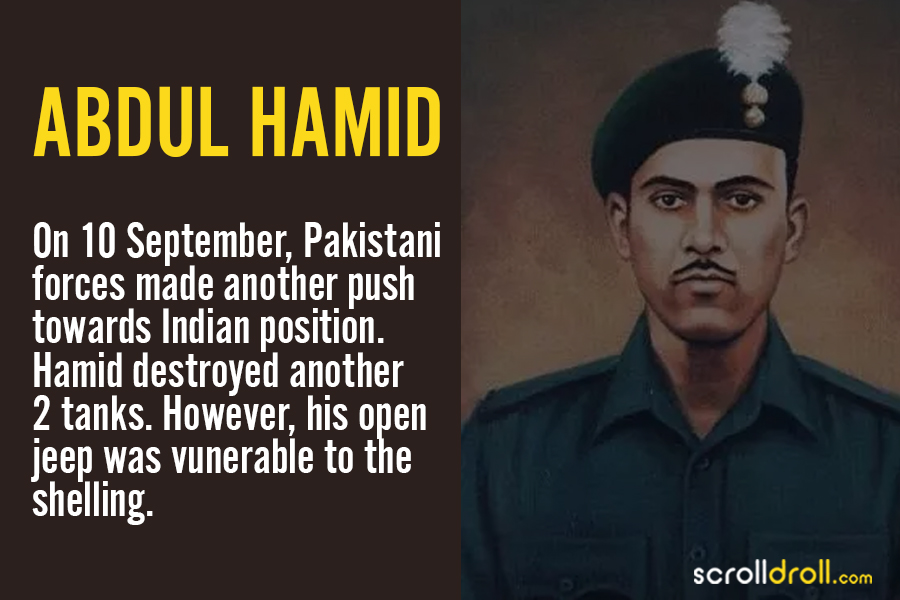 While in the middle of the chaotic battle, Hamid’s jeep was suddenly directly spotted by Pakistani tank, which proceeded to fire at Hamid. Even though the tank Hamid fired at was destroyed, Hamid succumbed to his injuries. 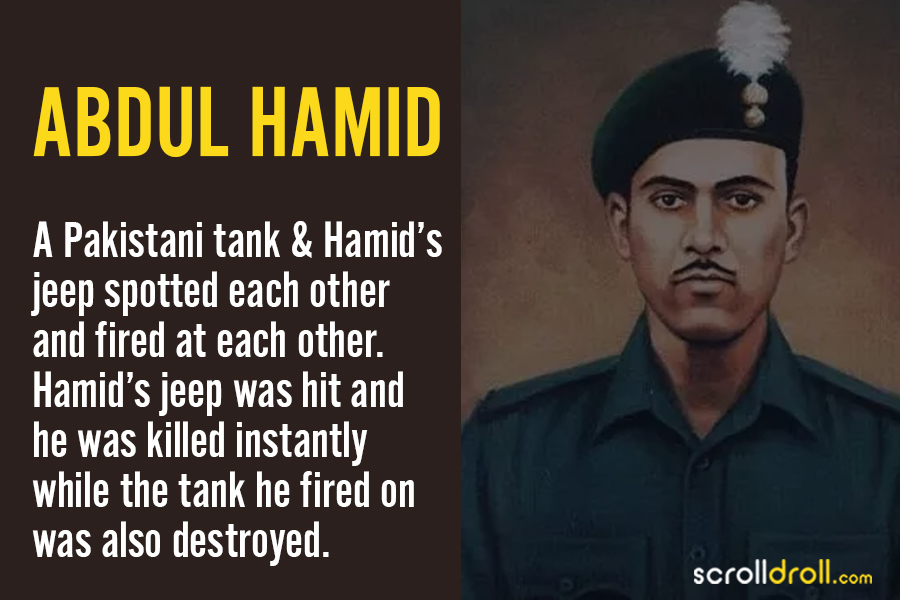 Because of Hamid’s heroic efforts, his battalion was able to supress further attacks, and the battle was a decisive Indian victory. 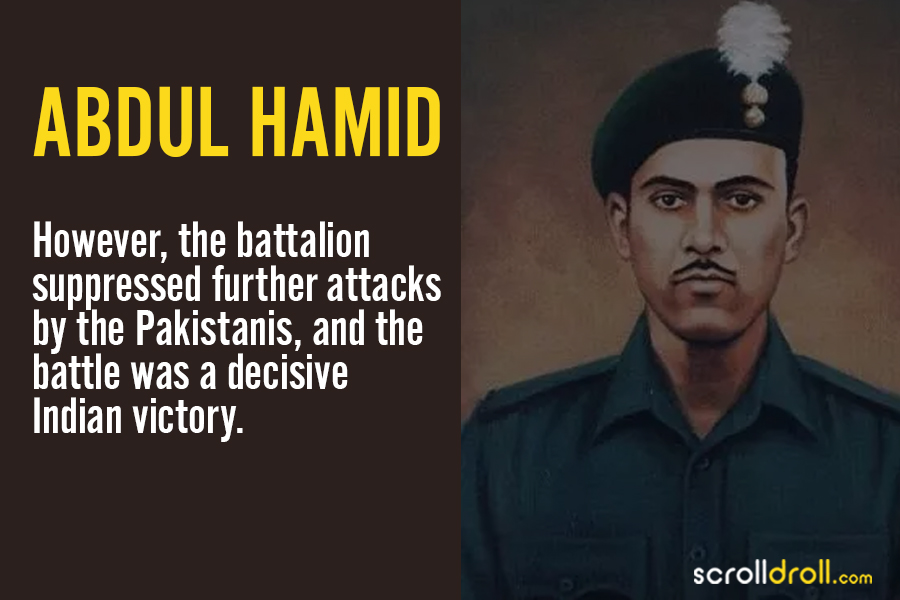 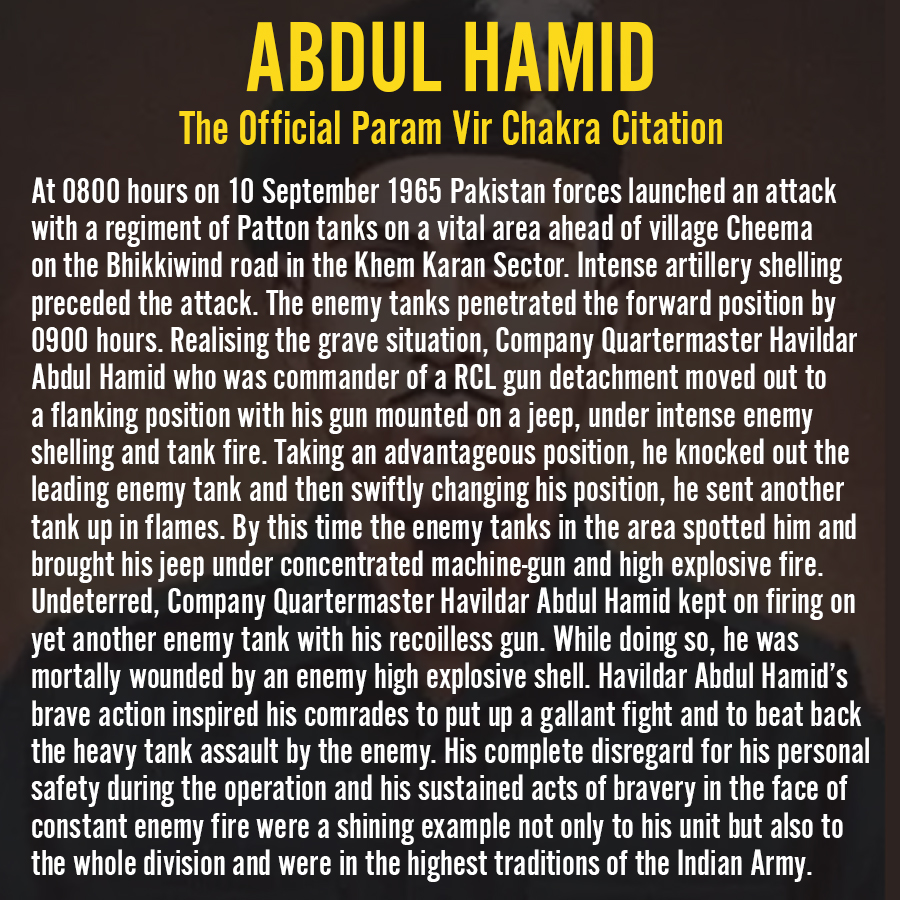 The notes from the battle were sent to officials in a hurry, which is why the citation mentions only 2 tanks – failing to mention the other five Hamid had destroyed. 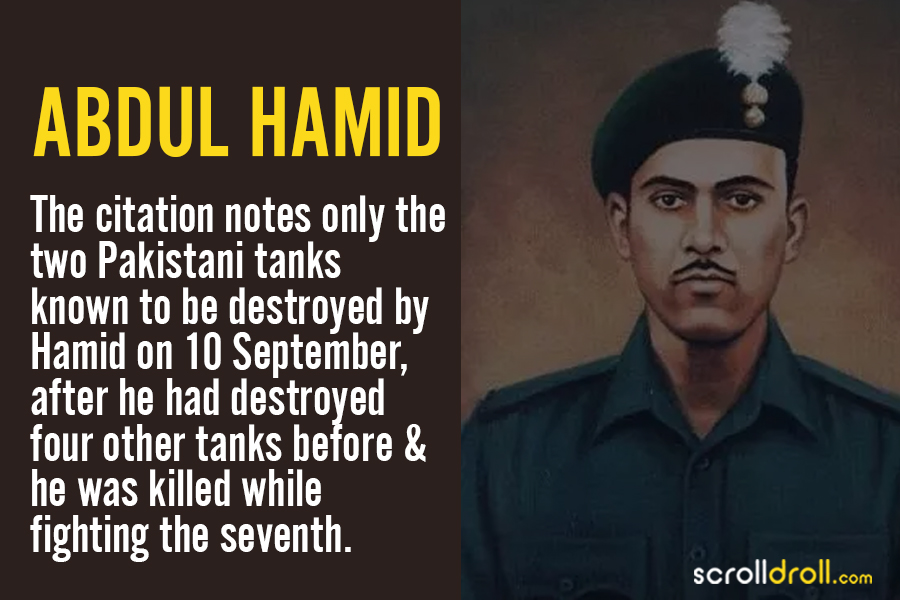 In fact, retired Army general Ian Cardozo has written that the award citation failed to give him the full credit for the appropriate number of tanks he had destroyed. 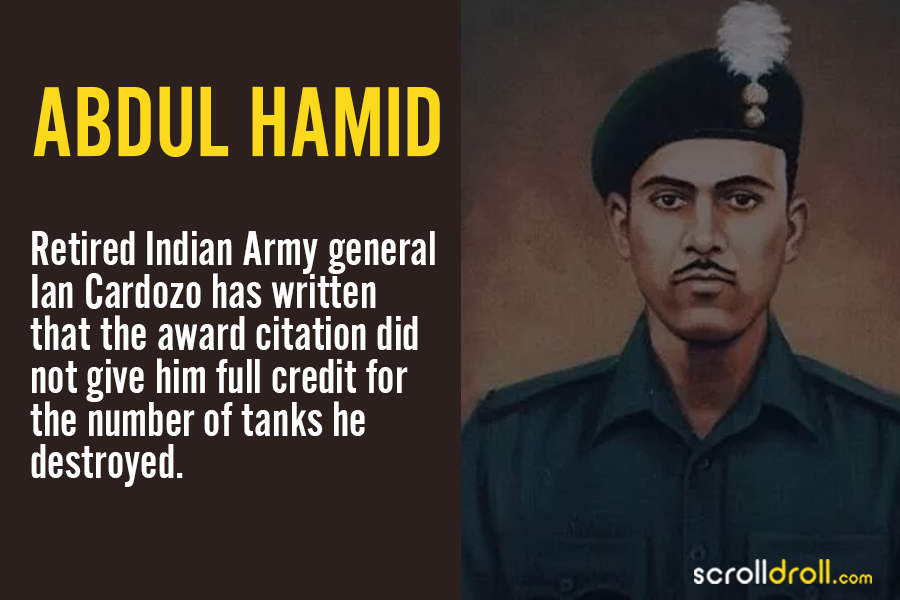 Confusion prevails while putting up a number, but it does not take away from the fact that what Havaldar Hamid did was extremely courageous. He laid down his life for the nation and is remembered as a hero. 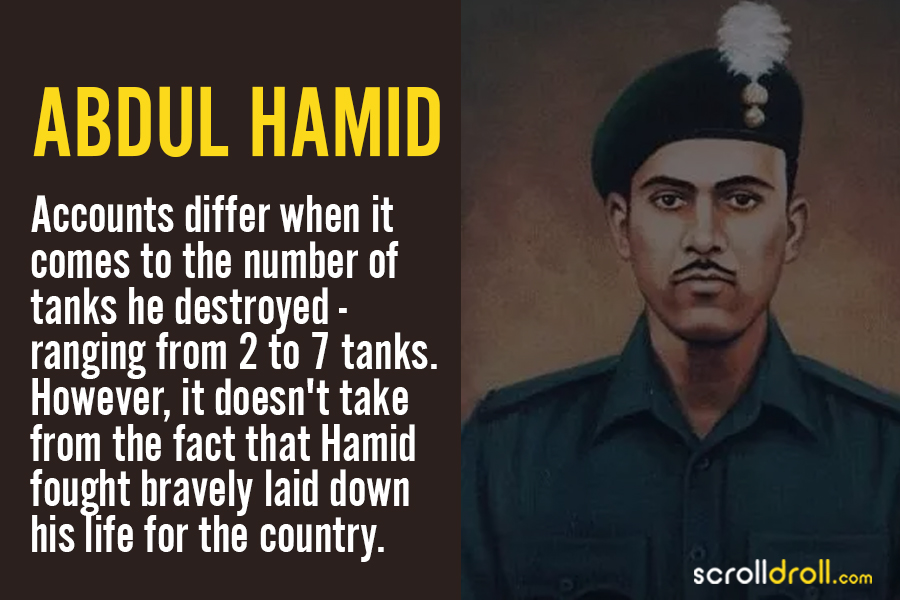 According to Historians, India’s victory at the Battle in Asal Uttar played a decisive role in helping India win the war against Pakistan in 1965. And for that, we have Havaldar Hamid to thank, amongst hundreds of other soldiers who put themselves at risk for the safety of the country. 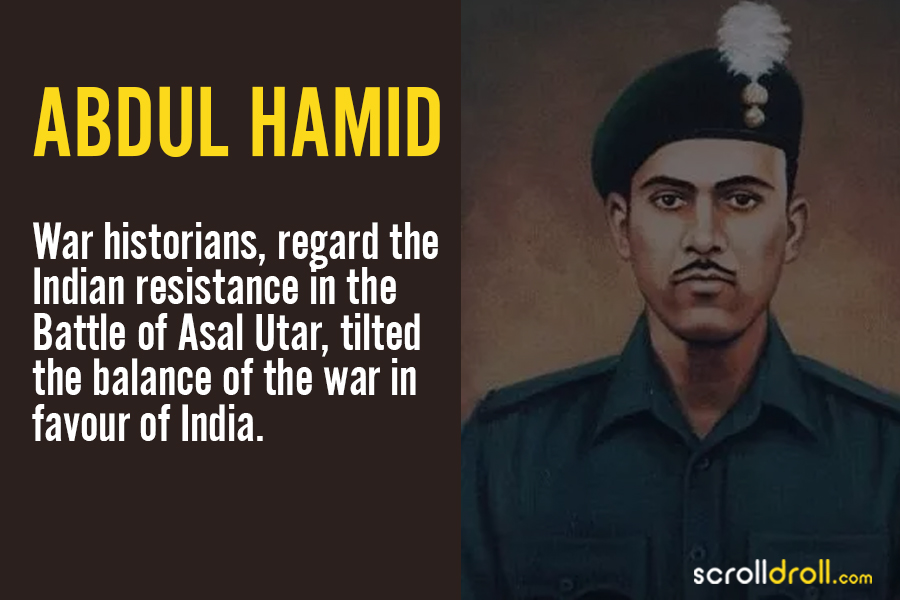 Did you like reading up on the story of Havaldar Hamid? Keep checking out ScrollDroll to learn about more such forgotten heroes!