The National Crime Bureau reports by the government released every year show that there are over 50 Lakhs crime in India every single year. With a population of over 130 crores ridden with economic and social issues, a number of Crimes surface in the country every single day. However, some crimes stand out for the sheer amount of intelligence and brain behind them. From manipulating the loopholes in the system to finding new ways to escape law enforcing authorities, a number of crimes in India have raised eyebrows. We bring you a list of the 11 most intelligent crimes committed in India:

An Indian stockbroker, Harshad Mehta, also known as the ‘Big Bull’ in the Bombay Stock Exchange cleverly squeezed huge sums of money from the banking system taking advantage of their loopholes & invested the accumulated wealth in the stock market. He engaged in massive stock manipulation: He not only squeezed capital out of the banking system, but also hiked the demand of certain shares and then sold them off at much higher profits to make lakhs.

Mehta was efficient in using this system to manipulate share prices to an extent that shares of companies like ACC, one of the largest producers of cement in India increased from Rs 200 per share to Rs 9000 per share within a span of 3 months.

The scam was exposed by Sucheta Dalal, a columnist at Times of India who was later awarded the Padma Shri. Stock markets crashed at the exposure of this scam. This scam had swindled at least Rs 40 billion from the Indian banking system, making it not just one of the most intelligent crimes committed in India, but also one of the costliest.

Harshad Mehta was arrested and died of a heart ailment in December 2001 in Thane prison. He had a total of 28 cases registered against him. 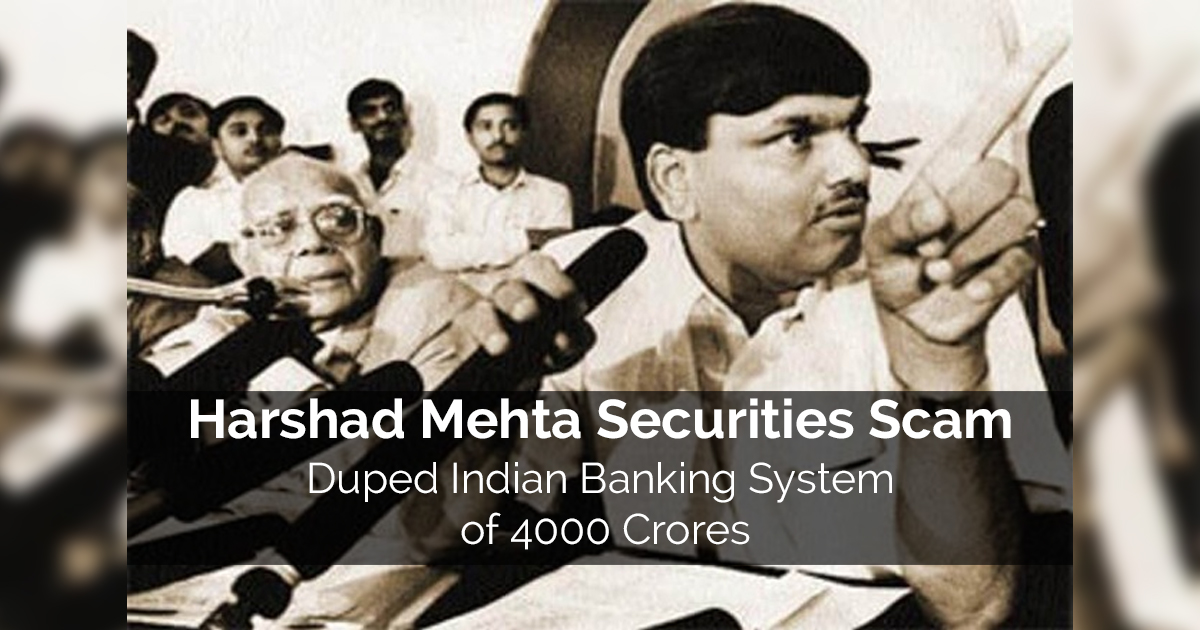 A man who has inspired fraudsters all across the country and used more than 50 aliases to disguise himself, Natwarlal is a legendary figure in India with even a statue dedicated to him in his native village in Bihar.

Natwatlal repeatedly sold the Taj Mahal, the Red Fort, the Rashtrapati Bhavan and even the Parliament House of India along with its 545 sitting members including the then Prime Minister of India, Indira Gandhi. He used more than 50 aliases, and was thus referred to as the master of disguise. He was also an expert at forging signatures of famous personalities

He is said to have forged the signature of India’s first president Rajendra Prasad’s and cheated a number of industrialists including the Tatas, Ambanis and Birlas. He is also said to have duped many shop-owners with lakhs of rupees, paying them by forged cheques and demand drafts.

He was convicted in 14 cases and was sentenced to 113 years in prison, however, he always managed to escape. He was caught for the last time in 1996 at the age of 84 but managed to escape yet again. His were truly the most intelligent crimes committed in India.

You can read more about him here: Natwar Lal: The Man Who Sold The Taj Mahal, Red Fort & Parliament House 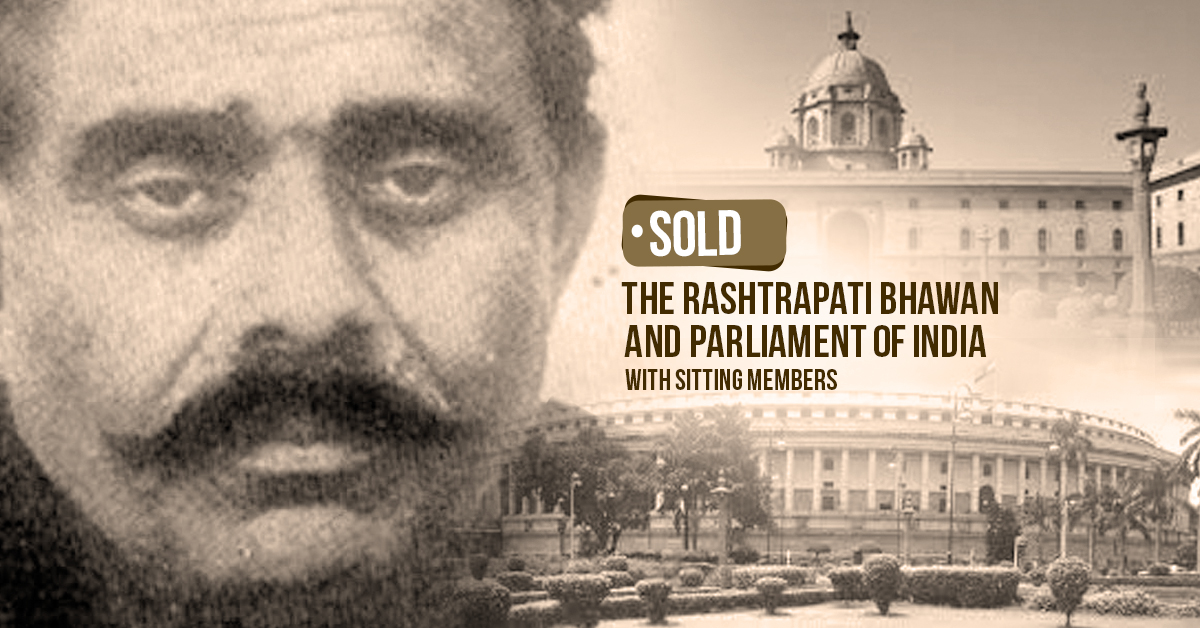 One of the biggest scams in the history of India to the tune of around Rs. 600 billion came in the form of the stamp paper scam by Abdul Karim Telgi.

The crime was very well-strategized and accomplished with paramount sophistication and planning and is still regarded as one of the most astutely carried out crimes in Indian history.

Flipkart was duped of over Rs 20 lakh by a 32-year-old Hyderabad man, Veera Swamy, who booked orders for valuable electronic items in the name of mother, father, wife, brothers and other known people in the neighbourhood. Once the items were delivered, he would swap the original item with a fake item and call up the call centre complaining that the goods delivered were of poor quality. He would send back the fake item, writing the model number and item code as received. He also created fake email IDs and made bank payments through different accounts, so that the money would be refunded to his various accounts. Once caught, he was accused of making 200 purchases over a span of 20 months, causing a loss worth Rs. 20 Lakhs to Flipkart

Mohan Singh posed himself as a CBI officer & raided Opera House, Mumbai’s most exclusive jewellery store in March 1987. He took several pieces of jewellery and decamped, leaving behind his “CBI” team.

The team itself had been selected by Mohan Singh in an interview after placing a classified ad in “The Times of India” for Intelligence Officers and Security Officers Post. The participants never knew that he was a master con-artist, and were kept in the dark till the end. Mumbai police put a nationwide alert to catch Mohan Singh, but never caught him. Police admitted that it was the perfect crime, making it one of the most intelligent crimes committed in India.

The Bollywood movie “Special 26” was inspired by this criminal incident but in reality, the robbery was committed by a single man, not by a gang of 4-people as depicted in the movie.

In 2008, an unknown Indian hacker was charged with the world’s biggest cybercrime. He had allegedly helped a criminal gang in stealing identities of an estimated eight million people in a hacking raid that could have ultimately had a net worth of more than £2.8 billion in illegal funds. He had successfully breached the IT defenses of UK’s Best Western Hotel group’s online booking system & sold details of how to access it through an underground network operated by the Russian mafia. The data breach included a range of private information including home addresses, telephone numbers, credit card details and place of employment. Scotland’s Sunday Herald newspaper discovered this flaw and alerted the hotel’s management and the security breach was closed in time, but the stolen information was already being used by hackers.

Identity of the original Indian hacker has not been found yet, marking the status of this event as one of the most intelligent crimes committed in India.

A Parsi ex-Indian Army Captain serving as intelligence officer in 1971, Rustom Nagarwala was able to take out 60 lakh Rupees from the Parliament Street branch of State Bank of India by just mimicking the voice of the then prime minister, Indira Gandhi, over the phone to chief cashier Ved Prakash Malhotra. He described it as a “matter of great national importance” & the money was delivered to Nagarwala, who claimed to be the PM’s courier.

The biggest corporate scandal in India that shocked the investors came when B.Ramalinga Raju, the Founder & Chairman of Satyam fudged the company’s account books to the tune of 5040 crore rupees. CBI pegged the fraud at Rs. 140 billion & he failed to fill the “fictitious assets with real ones” through Maytas acquisition. When that fell through, he resigned as the CEO, and that is when he confessed about the crime that he had committed. This led to the future of both the employees and the company in the gallows. Mahindra now owns upto 46% share in Satyam.

One of the most intelligent, perfect & unique bank robbery cases carried out with unforeseen professionalism drawing the attention of even the PMO occurred in the PNB, Gohana branch in Sonepat, Haryana in 2014 on the intervening night of Saturday and Sunday.  The incident came to light on Monday.

A 125 feet-long & 2.5 feet wide tunnel was dug from an abandoned house to the locker room of the Punjab National Bank. Robbers managed to break around 89 lockers & steal Cash and jewellery worth crores of rupees (around 100 crore). Public & police were extremely stunned with the style & manner in which the tunnel was dug and opened right inside the locker room of the bank without making any suspicious movement of people or sounds of digging. The digging was done with such finesse that telephone cables and water pipelines in the tunnel remained completely untouched, leaving every one stunned and making it one of the most intellgient crimes committed in India.

3 days after the robbery, police arrested 3 persons & recovered 24 kgs of jewellery & some cash.

The owner of the abandoned house, through which the tunnel was dug committed suicide

As something that was described as the biggest bank robbery in India at the time it happened, the PNB robbery in Ludhiana took place in 1987 when General Labh Singh, a Khalistani militant masterminded the crime with the help of his followers.

On D-Day, some 15 Sikhs dressed as policemen and armed with machine guns entered the Millar Ganj branch of PNB in Ludhiana, and stole nearly 6 crore rupees. The stolen dough helped the Khalistan Commando Force to buy sophisticated weapons, including AK-47 rifles.

After becoming a chartered accountant, Ketan Parekh began his career in the late 80s at Narbheram Harakchand Securities (NH Securities), a reputed brokerage firm. Some time in the 90s, Parekh came in contact with Harshad Mehta, who at that time was a well-known stockbroker. Parekh then joined Mehta’s firm, GrowMore investments, which was involved in the 1992 Indian stock market scam. Parekh himself was named as one of the accused in the 1992 scams, but it wasn’t until the late 90s that any action was taken against him.

In 2001, Parekh was arrested for his involvement in malpractices related to the stock market. Like his mentor, he was also involved in inflating the prices of the shares he owned, for example, shares of Zee Telefilms went from Rs 127 to Rs 10,000. Parekh was especially interested in 10 particular stocks, which colloquially came to be known as the K10.

When the RBI began to investigate Parekh, he panicked and tried dumping his K10 stocks, which eventually resulted in a stock market crash the next day, which resulted in huge losses for investors. Parekh was eventually banned from stock trading till 2017.