When the history of 21st-century India would be written, it will remain incomplete without the mention of one man – Narendra Damodardas Modi. Starting as a tea seller in Gujarat, Narendra Modi made his way to become the Prime Minister of the world’s largest democracy twice with convincing victories and an enviable parliamentary majority.

One of the key prowess of Narendra Modi is his ability to communicate with the layman of India. He is known for his powerful speeches, oratory and fiery statements without mining words. Narendra Modi’s quotes, words, and speeches are followed carefully by Indians and across the globe.

We bring you the best and most powerful Narendra Modi quotes that will inspire every Indian.

1. “I’m from Ahmedabad where we have a saying: ‘single-fare, double journey. I usually try to visit two to four nations together when I go to international trips.” 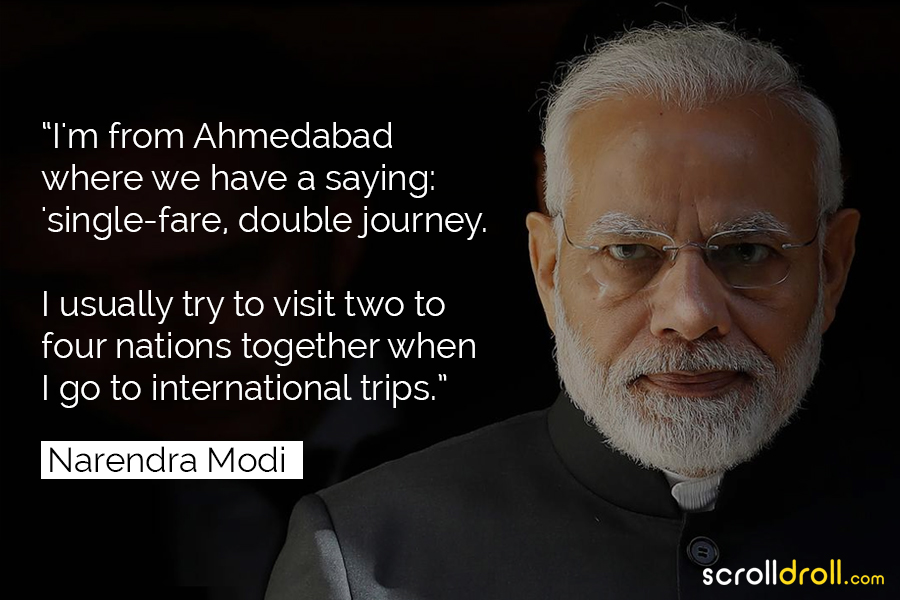 2. “For me, my secularism is India first. I say the philosophy of my party is ‘Justice to all. Appeasement to none.’ This is our secularism.” 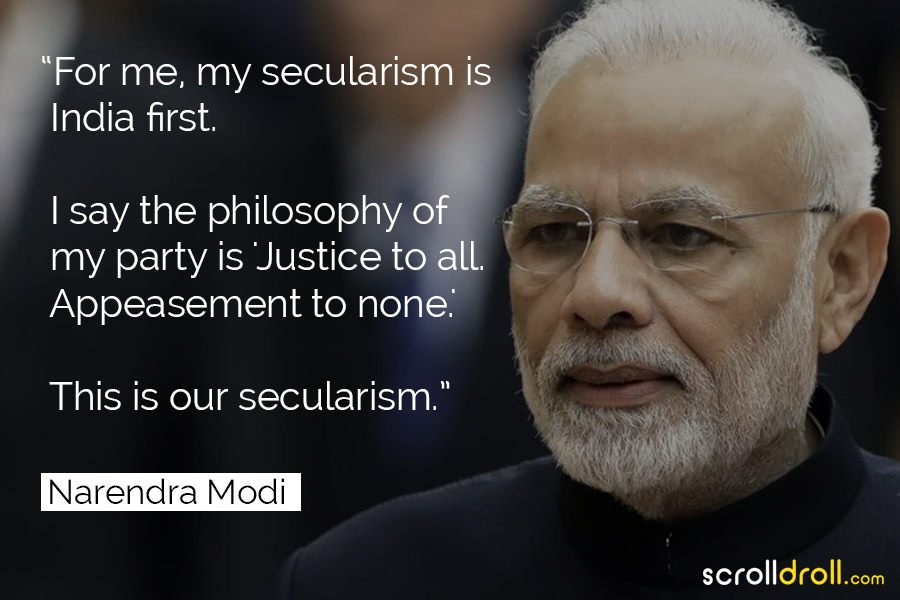 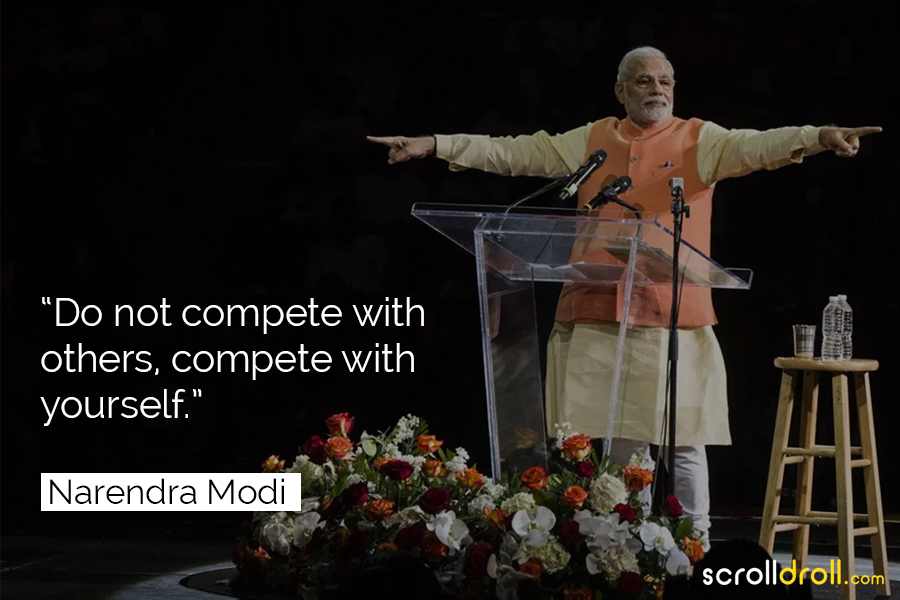 4. “The law of nature is that Truth alone triumphs: Satyameva Jayate.” 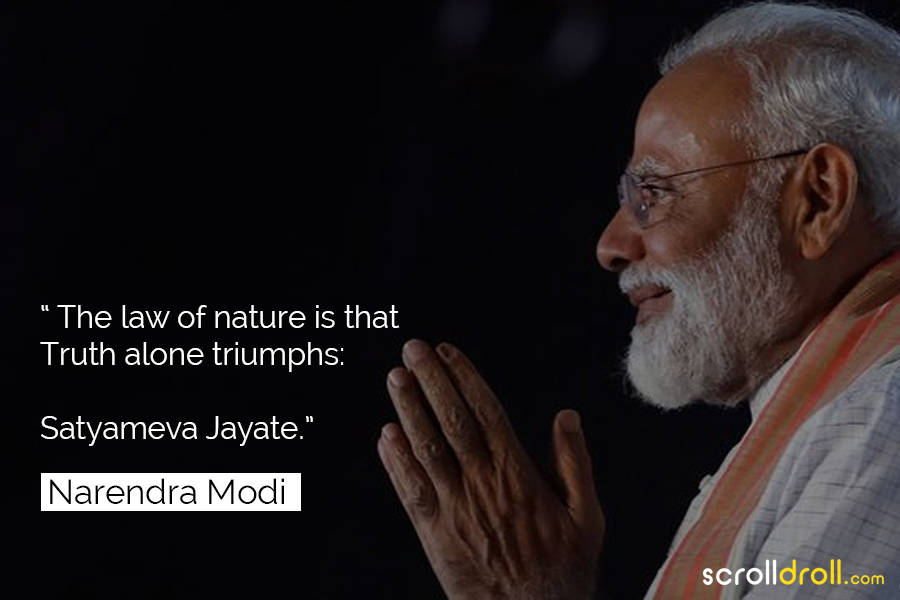 5. “The Chalta Hai attitude held our nation’s progress hostage for a long time, I am challenging it.” 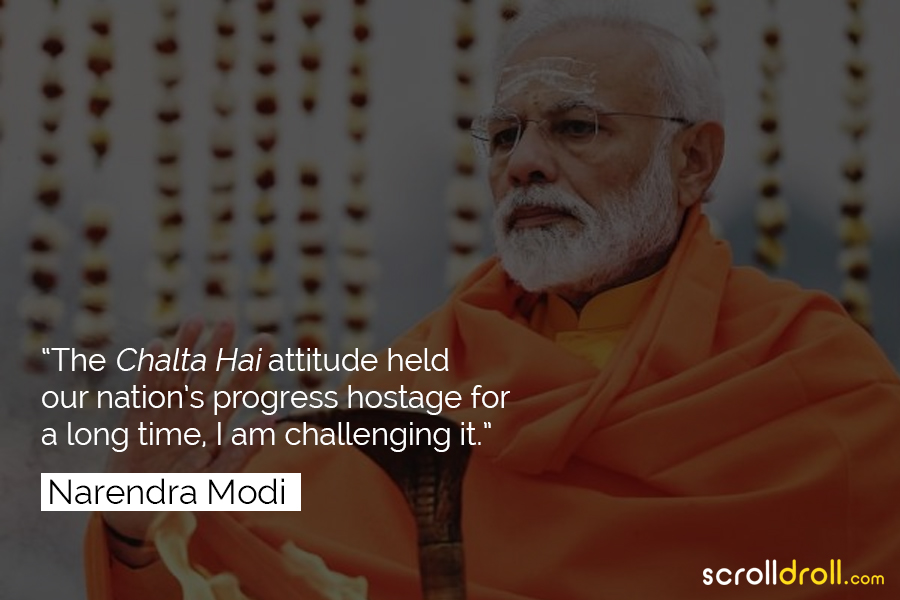 6. “A son of a poor man is standing in front of you today! This is the strength of our democracy.”

This is one of the best Narendra Modi quotes that defines the power of Indian democracy that gives an opportunity to even the poorest of the poor to ride in power and stature. 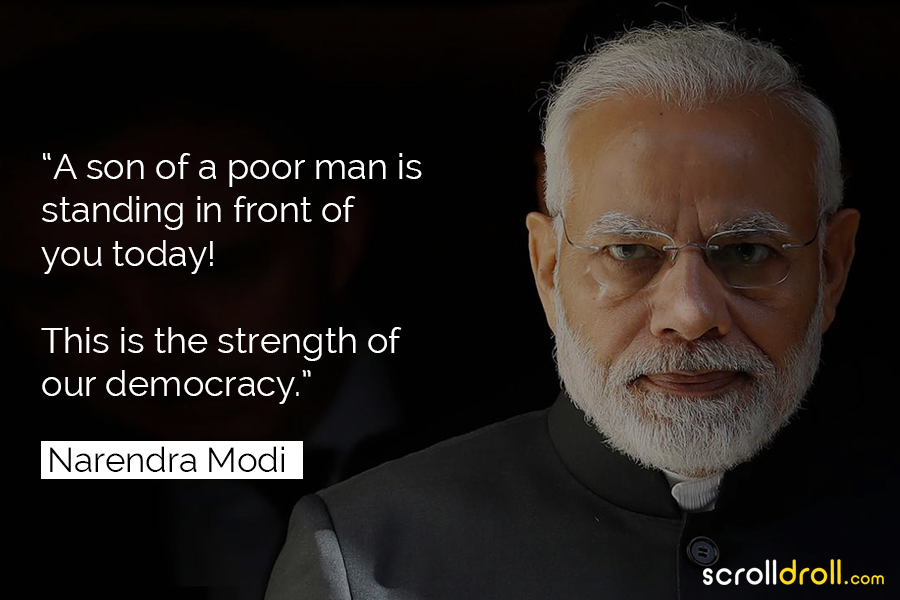 7. “No one can question the talent of India’s youth after the success of the Mars Mission. Everything indigenous!” 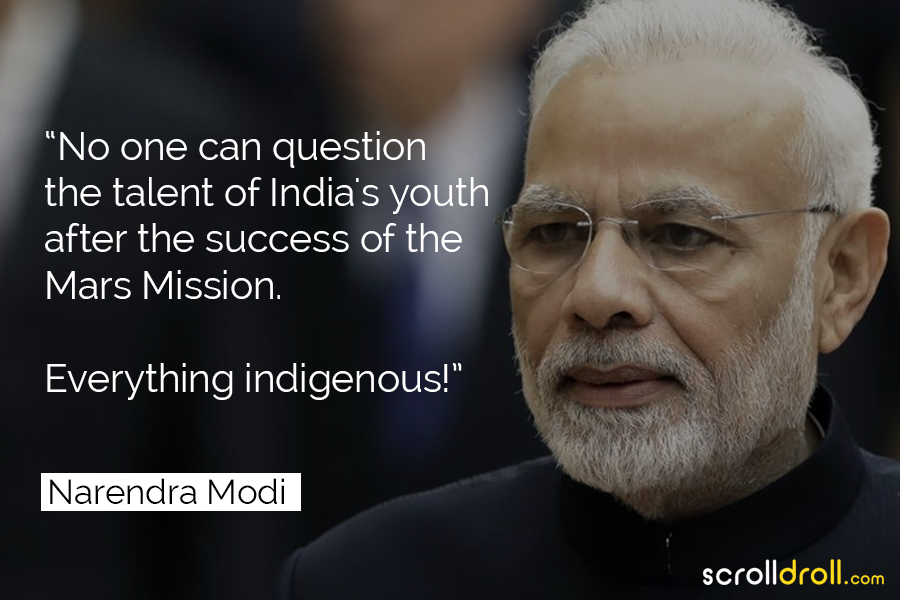 8. “I come from a poor family and I want the poor to get dignity.” 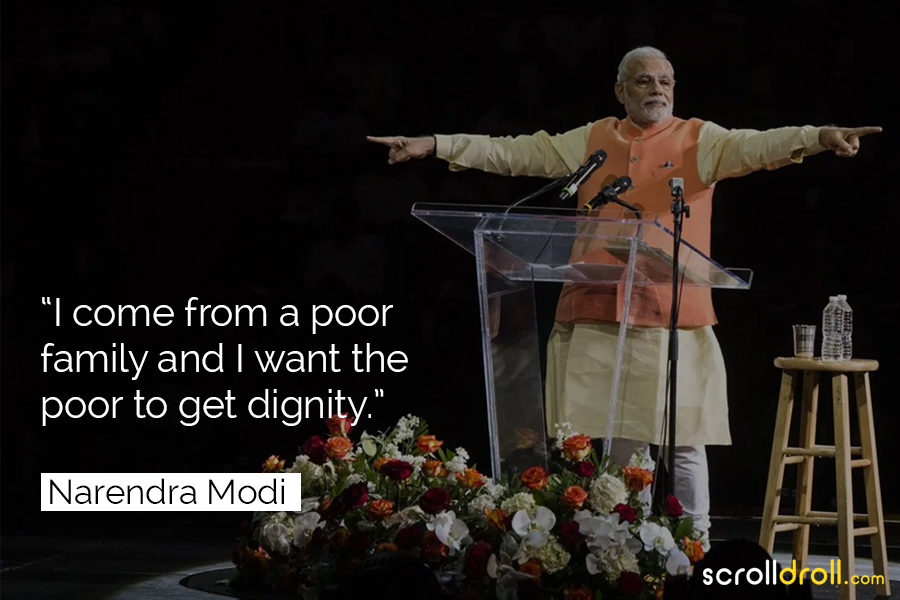 9. “ When the pure waters of Narmada flow into Sabarmati on account of our river linking project, do you expect me to measure how many litres are consumed by Hindus and how much water goes to Muslim households? My job is to ensure that every person, every household gets adequate supplies of clean drinking water.” 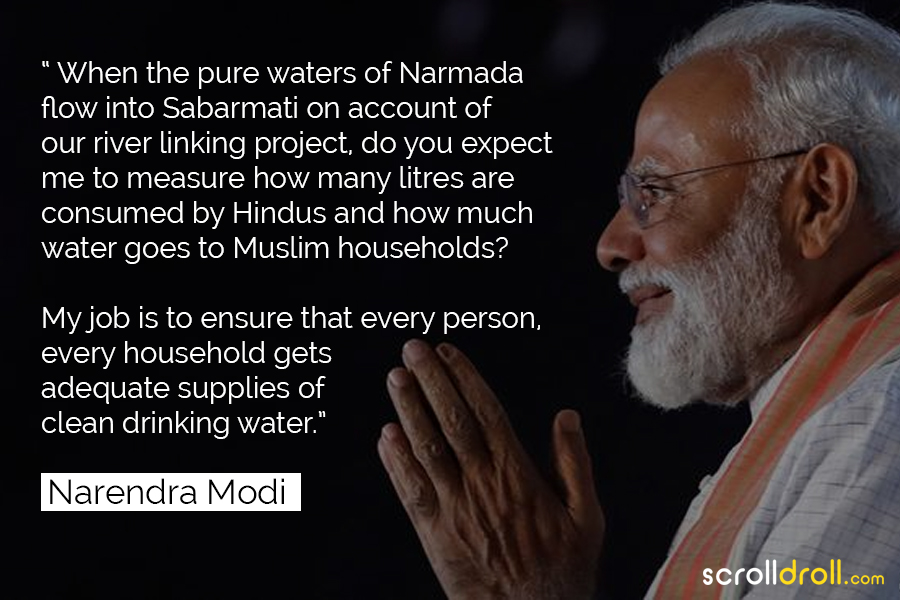 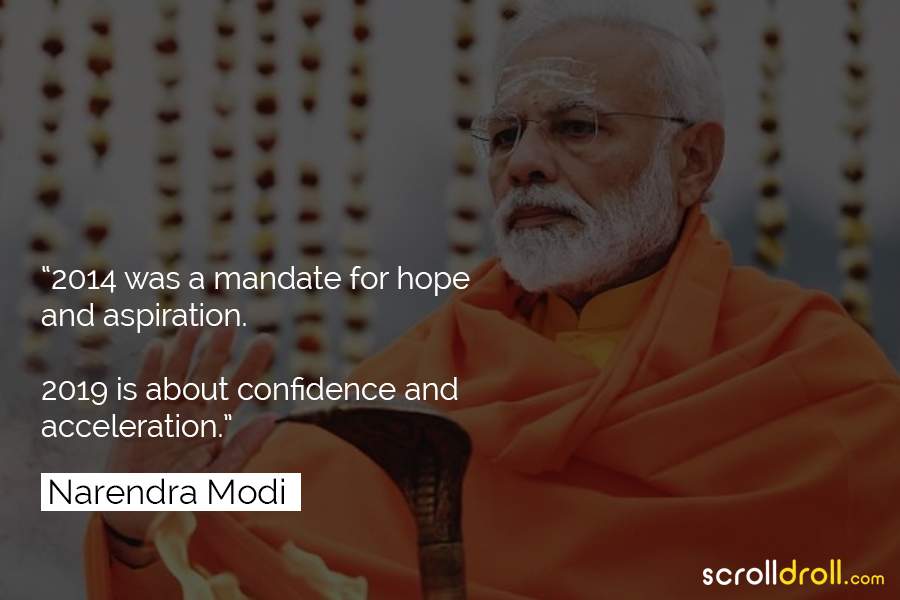 11. “This country has not been made by politicians, kings or governments. It has been made by saints, farmers, laborers and the people.”

This Narendra Modi quote from one of his parliamentary speeches speaks about the contributions of millions of Indians who have toiled hard throughout generations to make India what it is now. 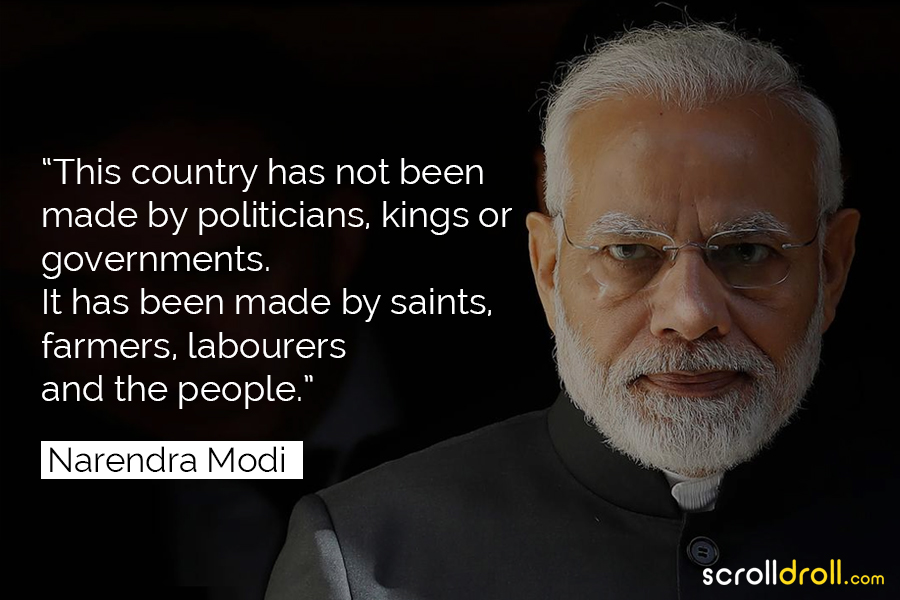 12. “Social media is reducing social barriers. It connects people to the strength of human values, not identities.” 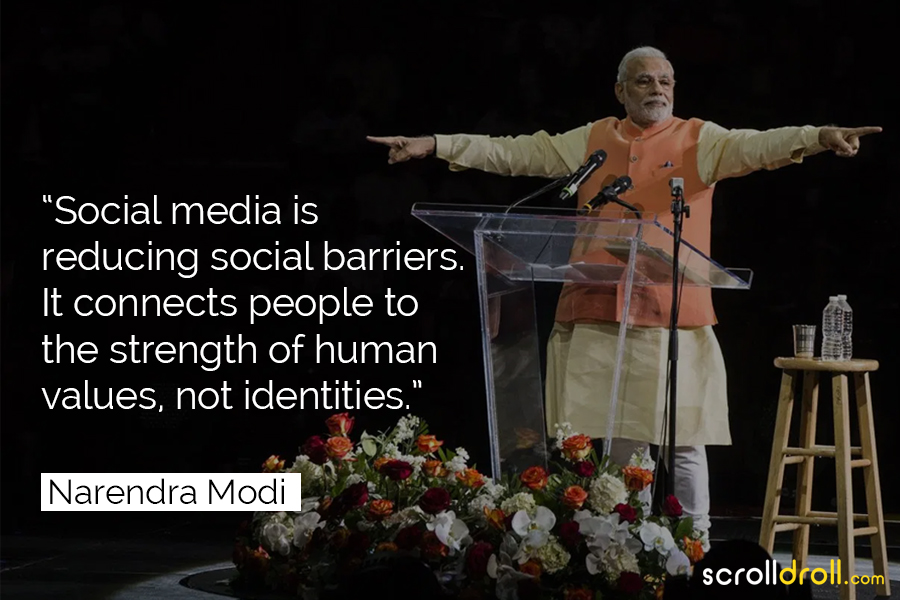 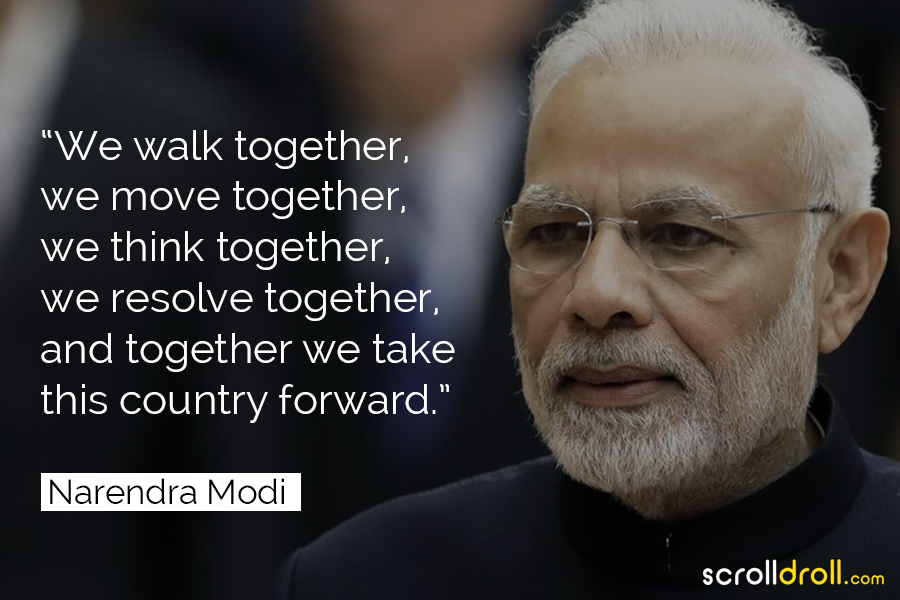 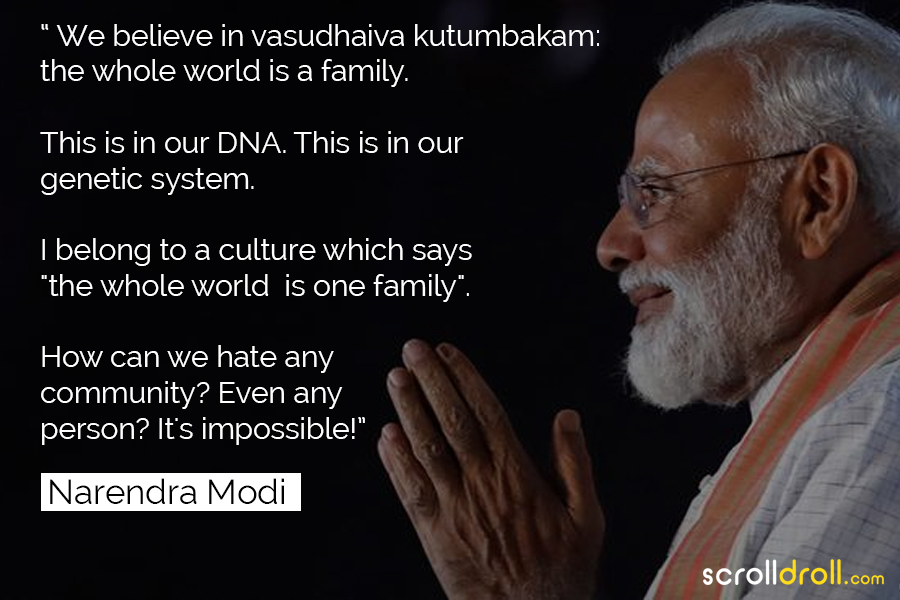 15. “Sports is a necessity of life. Let everyone play and shine.” 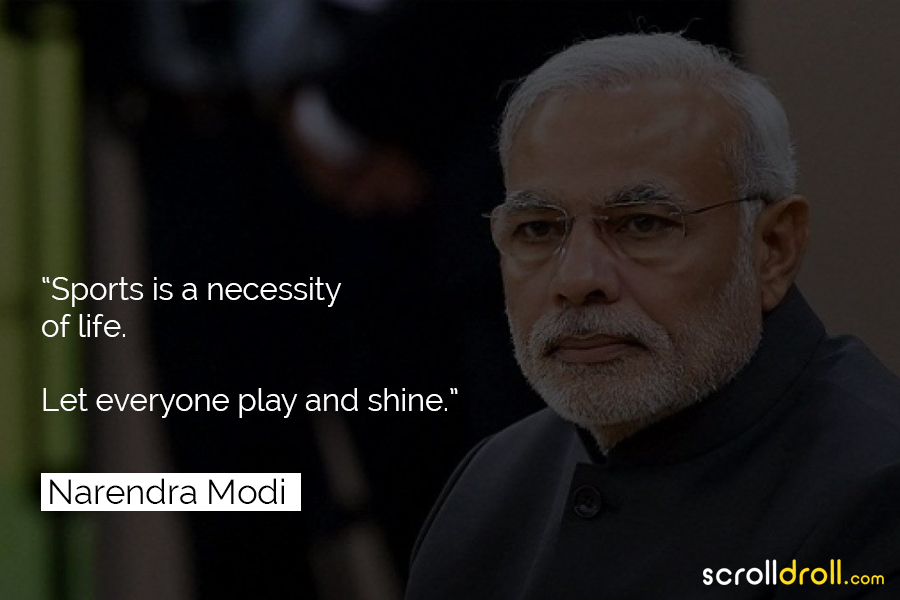 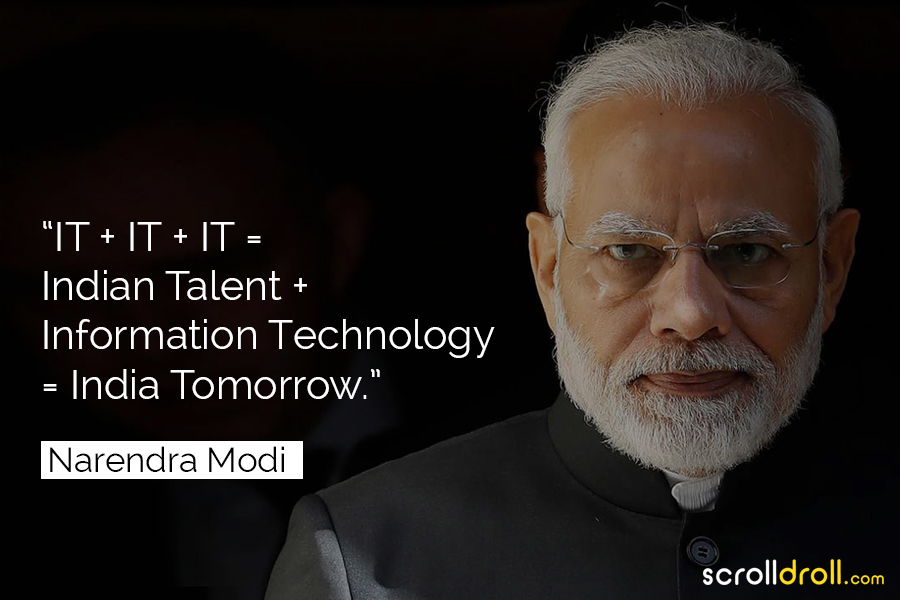 17. “India does not need to emulate any other country. India must become only India. This is a country that once upon a time was called – the golden bird.” 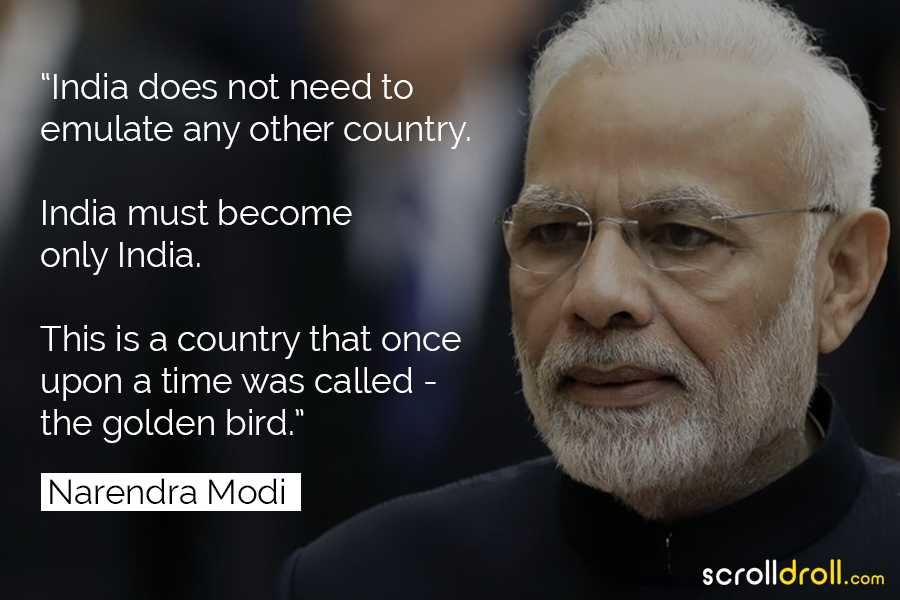 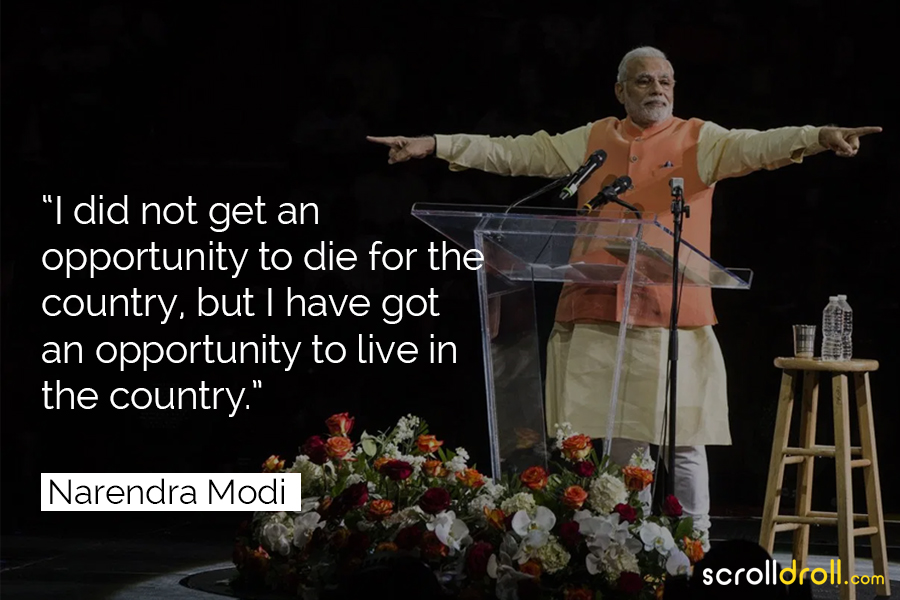 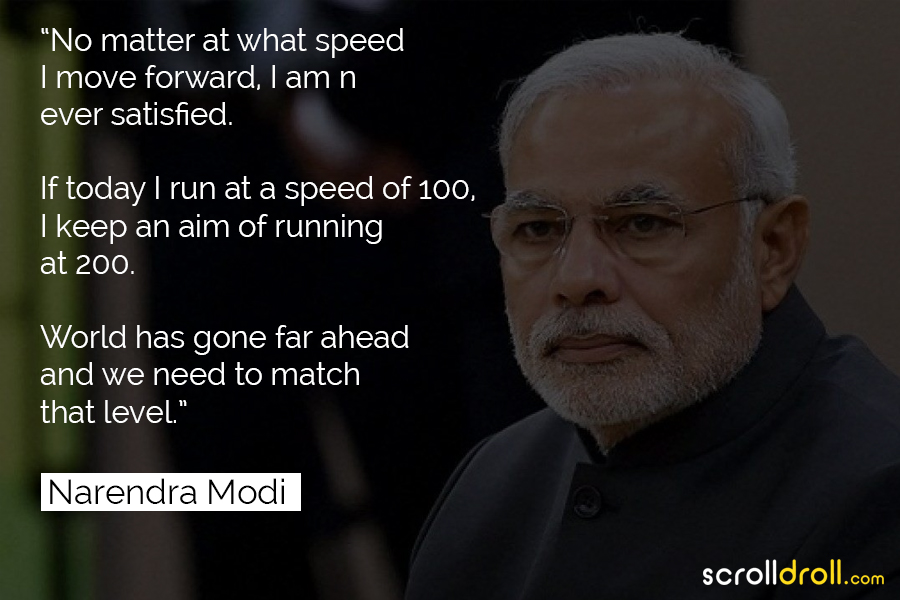 Narendra Modi on his trial for 2002 riots by the SIT which later cleared him of all charges. 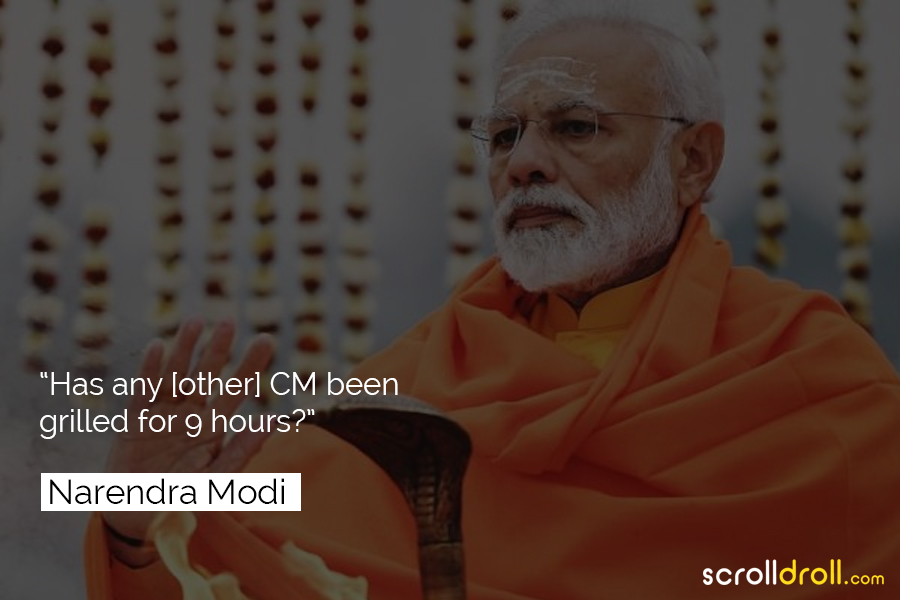 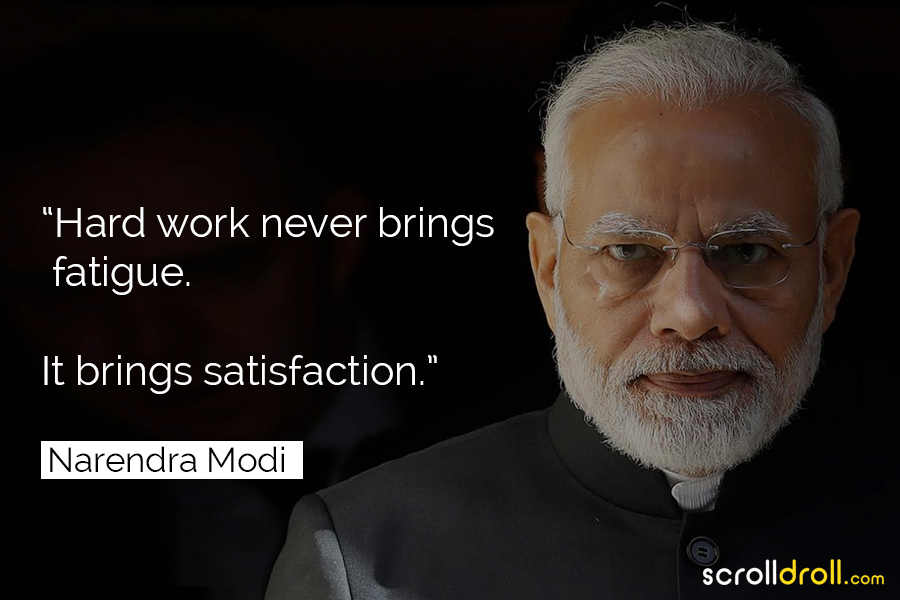 22. “Afghan-India Friendship dam has not been built by bricks and mortar, but by the faith of our friendship and the valour of Afghans and Indians.” 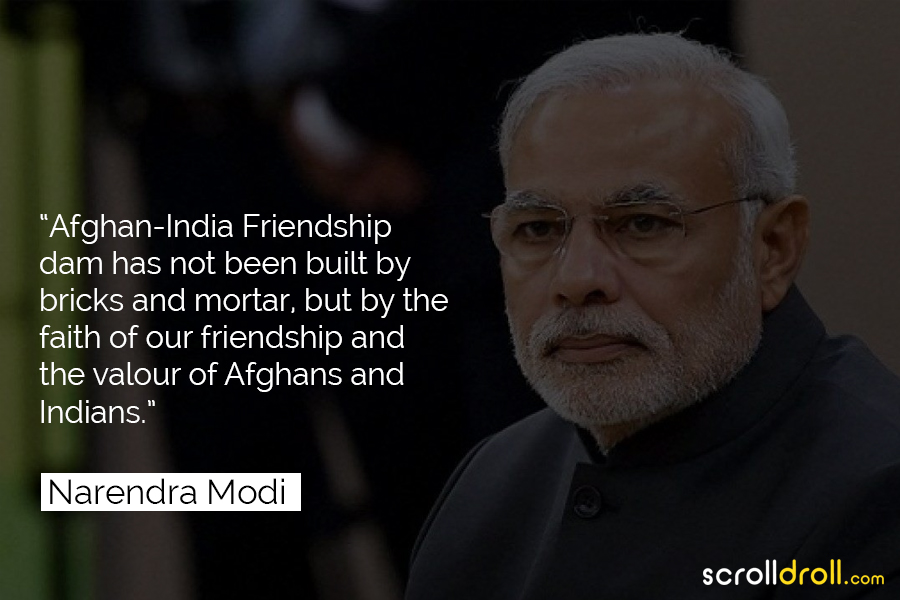 23. “A youthful nation like ours must leave an impact in the entire world.” 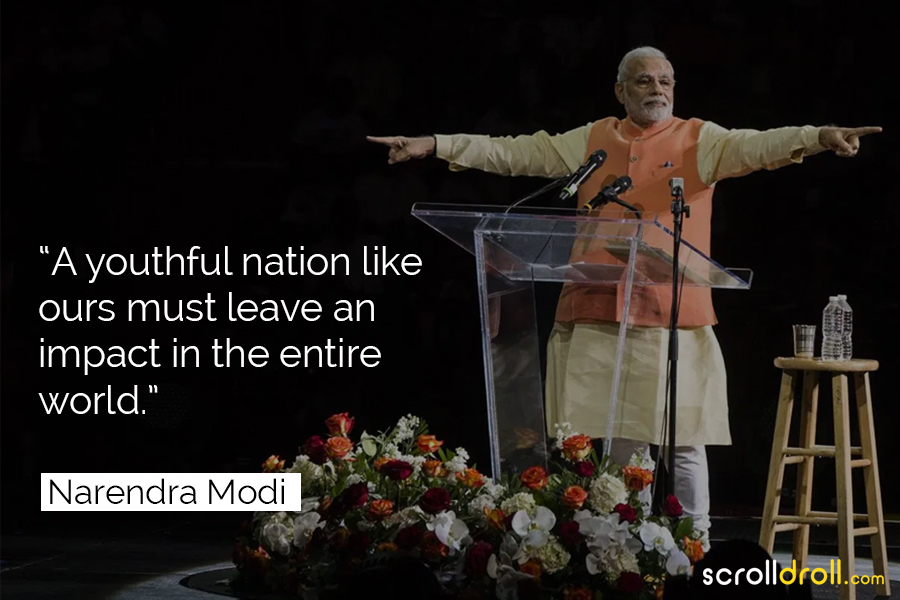 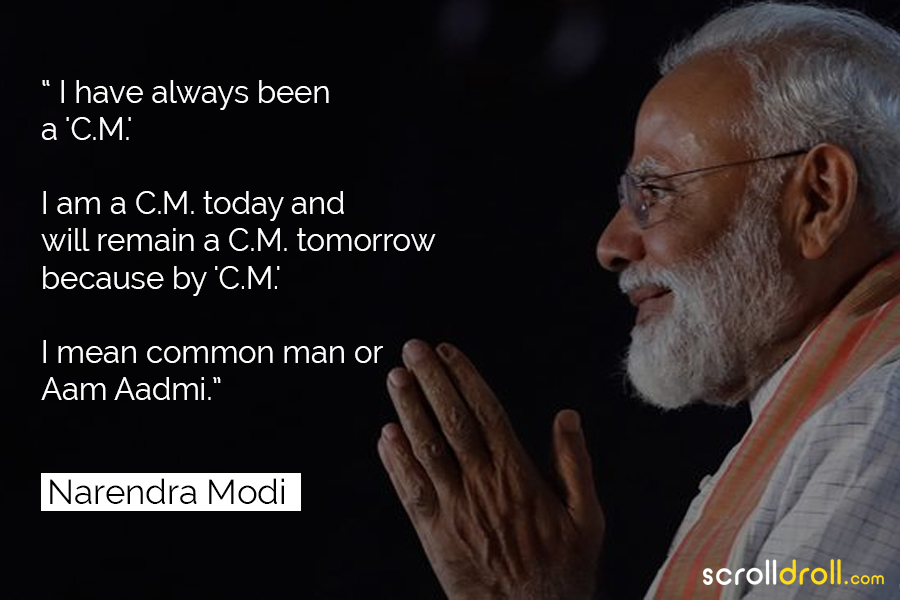 25. “Once we decide we have to do something, we can go miles ahead.” 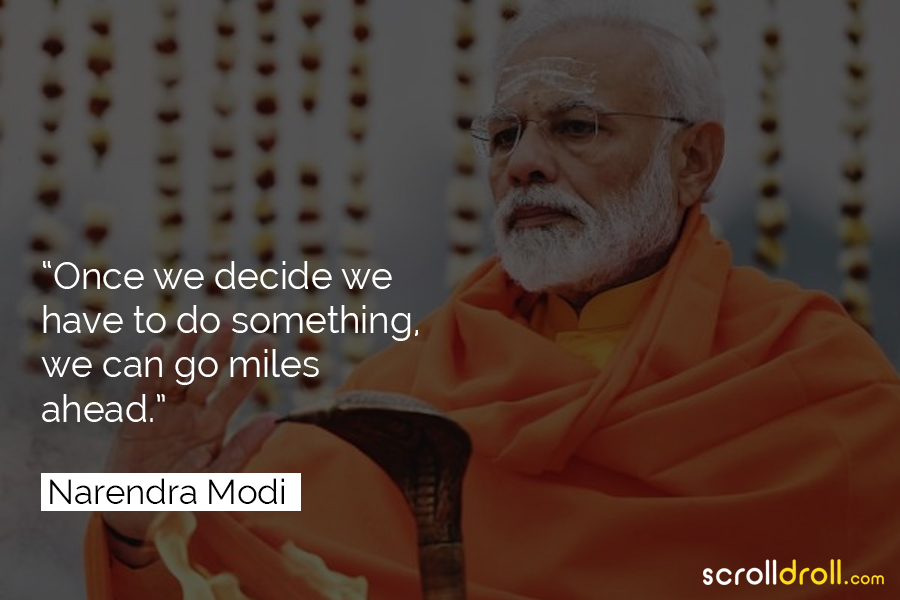 26. “India’s strength lies in her villages. Our aim is to bridge the differences between rural and urban India. We want our villages to have all the facilities that are there in the cities.” 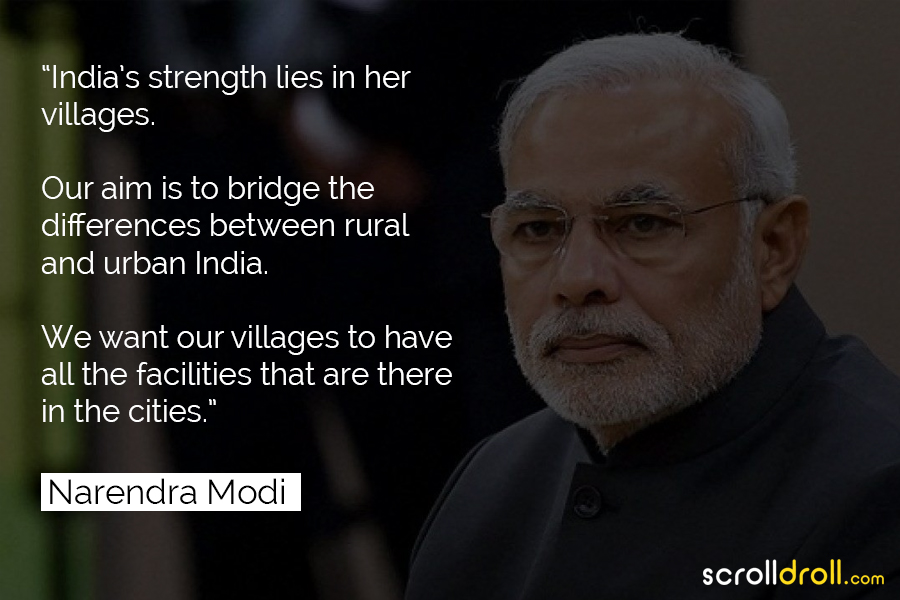 27.“An opportunity to work is good luck for me. I put my soul into it. Each such opportunity opens the gates for the next one.” 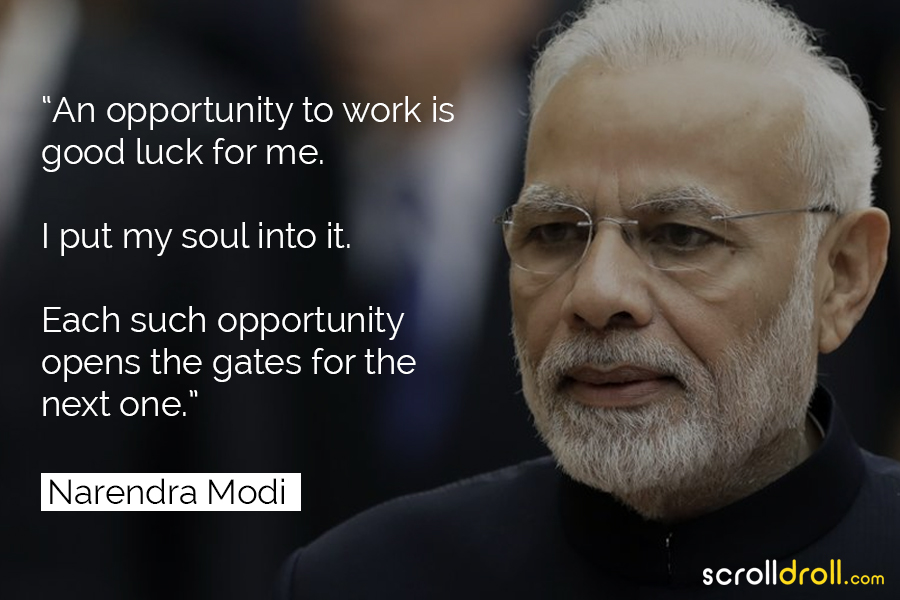 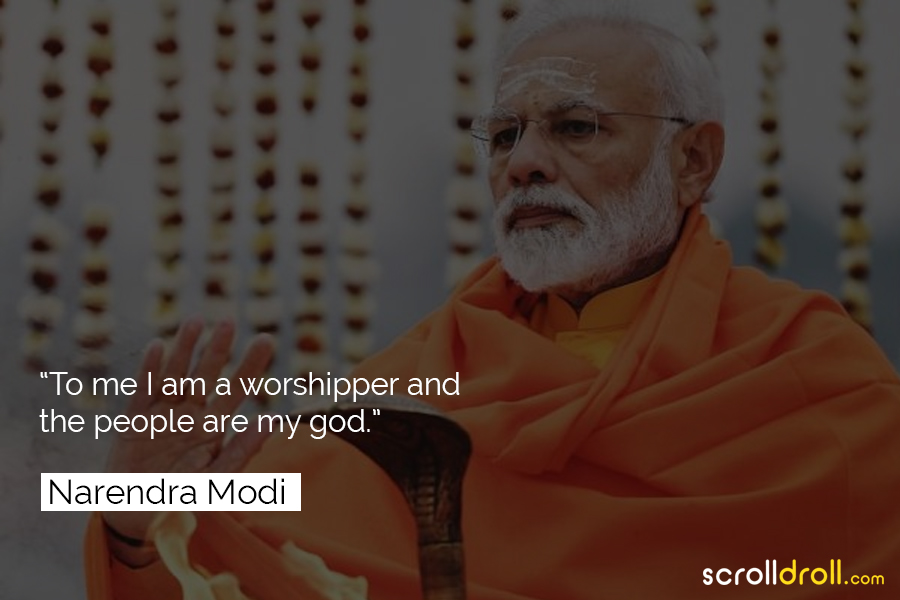 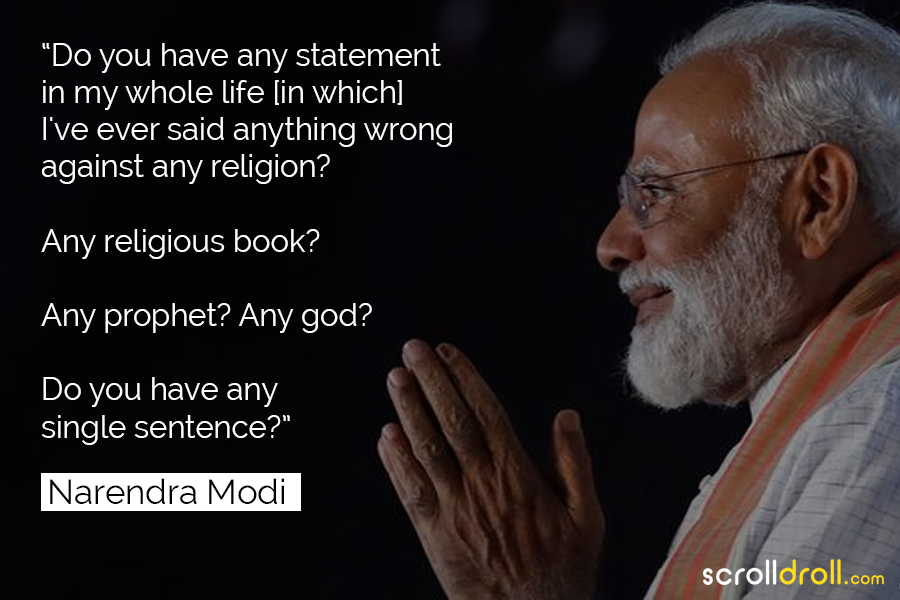 30. “Be it the First World War or the Second World War, India never attacked other countries. We never attacked any country for conquering their territory. But our brave soldiers fought for others and sacrificed their lives in both Wars. And, the world must recognise this.” 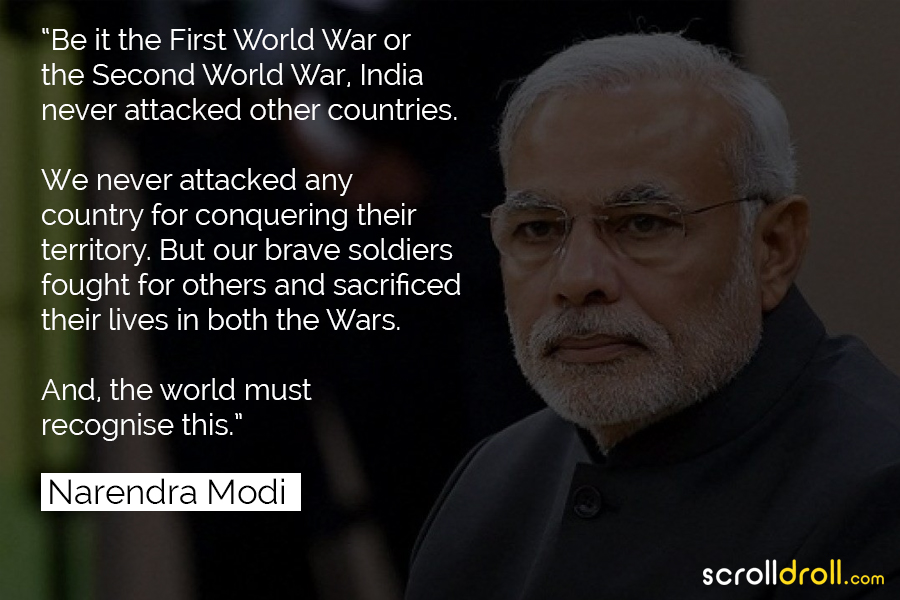 A man known to work hard without taking holidays and leaves, Narendra Modi has been an inspiration to millions of Indians willing to be a part of the ‘New India.’ His sheer determination to take tough decisions, develop international ties and built a modern India has gained the trust of the country through two historic electoral mandates.

Did we miss one of your favorite Narendra Modi quotes? Do let us know in the comments below.