It is no secret that Indians have a short memory span when it comes to people we owe our freedom to. It takes flashy, exciting movies and shows to remind us of our heritage. A forgotten name such as that is Sardar Udham Singh.

Born in 1899 at Sunam, Sangrur in Punjab, Udham Singh was orphaned at a fairly young age, as a result of which he and his brother were taken in by an orphanage in Amritsar, Central Khalsa Orphanage Putlighar. It was in this orphanage that he received his name – Udham Singh. 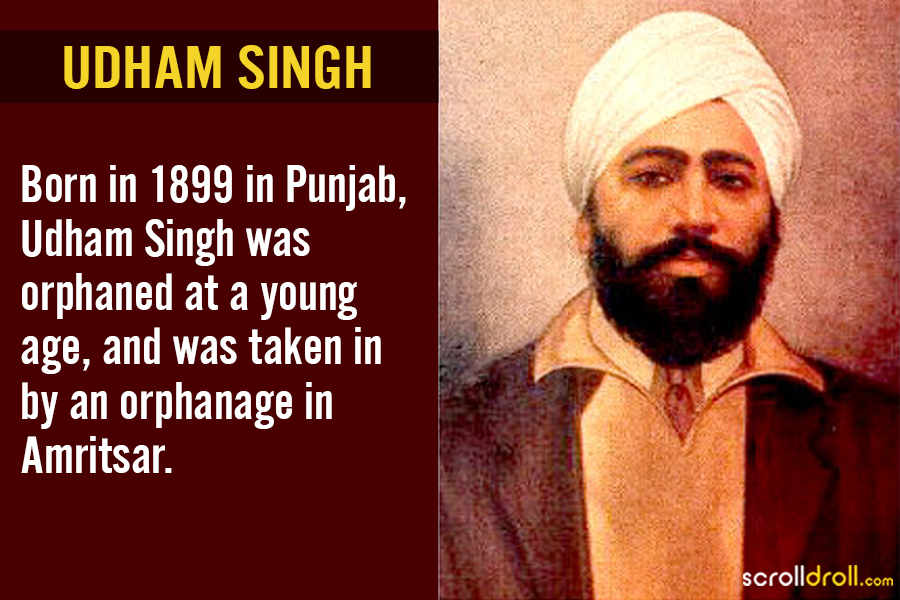 In 1919, the Imperial Legislative Council in Delhi passed the Anarchical and Revolutionary Crimes Act of 1919, popularly known as the Rowlatt Act. This gave the British colonial government the power to arrest any person without the presence of a valid reason or warrant. The Act was largely a half measure to curb any nationalist uprising, especially in the wake of the reinvigorated freedom movement under Gandhi’s influence. 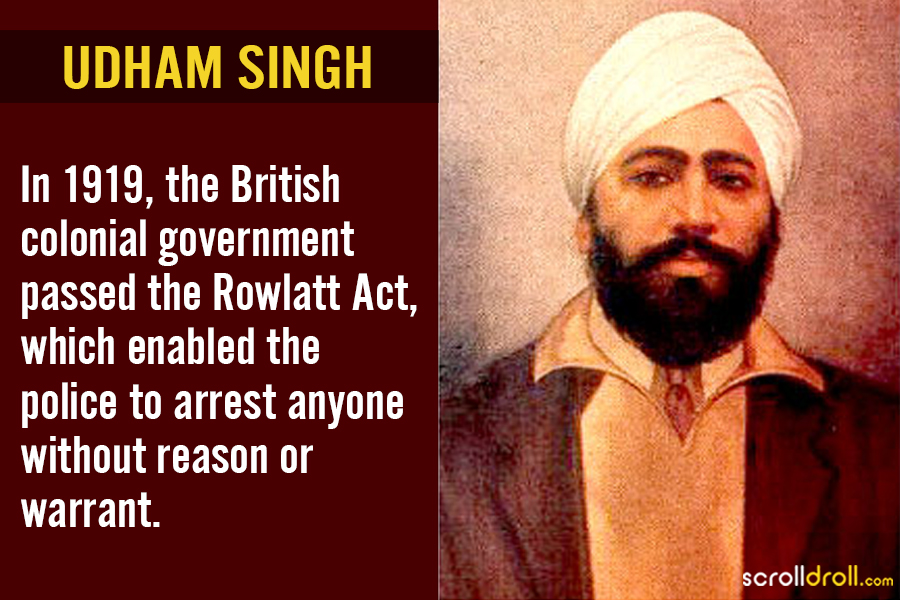 On the 13th of April in 1919, when Udham Singh was all of 19 himself, he witnessed one of the greatest tragedies to have ever occurred on Indian soil when British troops, under the command of Reginald Dyer at Jallianwalah Bagh opened fire on an unarmed crowd of over 20,000 people. Unfortunately for Udham, he witnessed this cold-blooded slaughter with his own eyes, as he and his friends from the orphanage had volunteered to distribute water to the crowd. The troops killed over a thousand Indians who had assembled to celebrate Baisakhi and were protesting peacefully. This came to be known as the Jallianwalah Bagh Massacre. 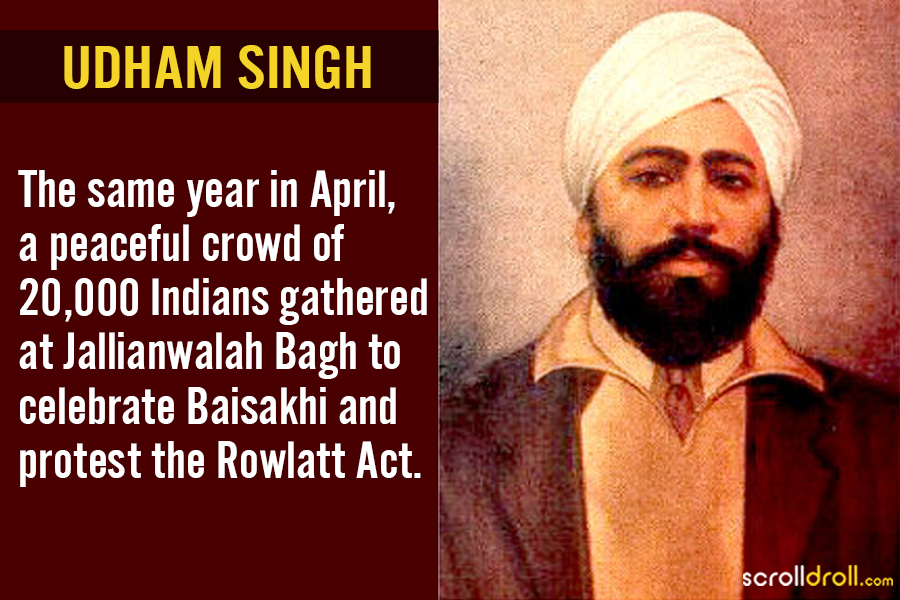 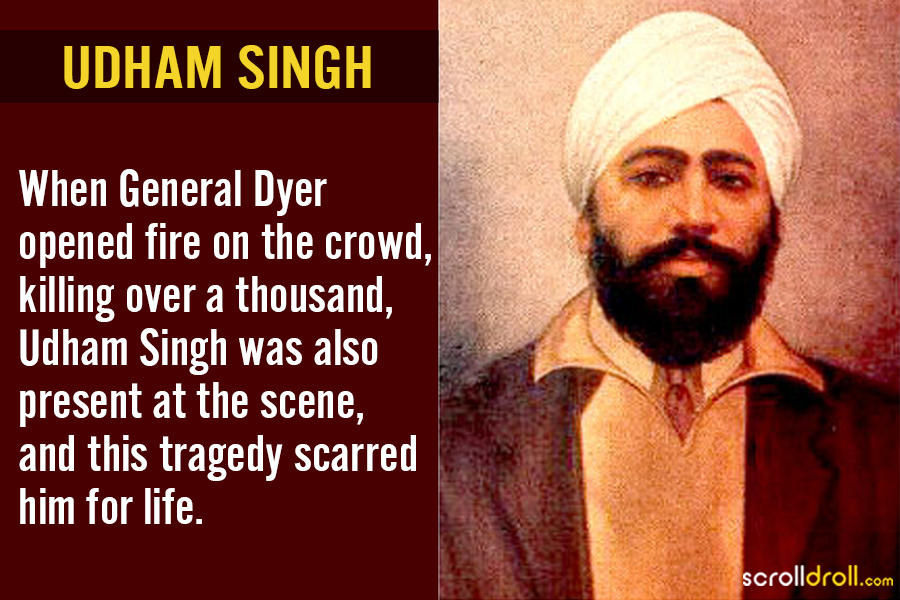 The Jallianwalah incident proved to be a major catalyst in Sardar Udham Singh’s fate – it pushed him towards revolutionary groups like that of Bhagat Singh – a person whom Udham admired deeply. In 1924, Udham Singh joined the Ghadar Party, an international movement founded by expatriate Indians seeking to overthrow British rule in India. 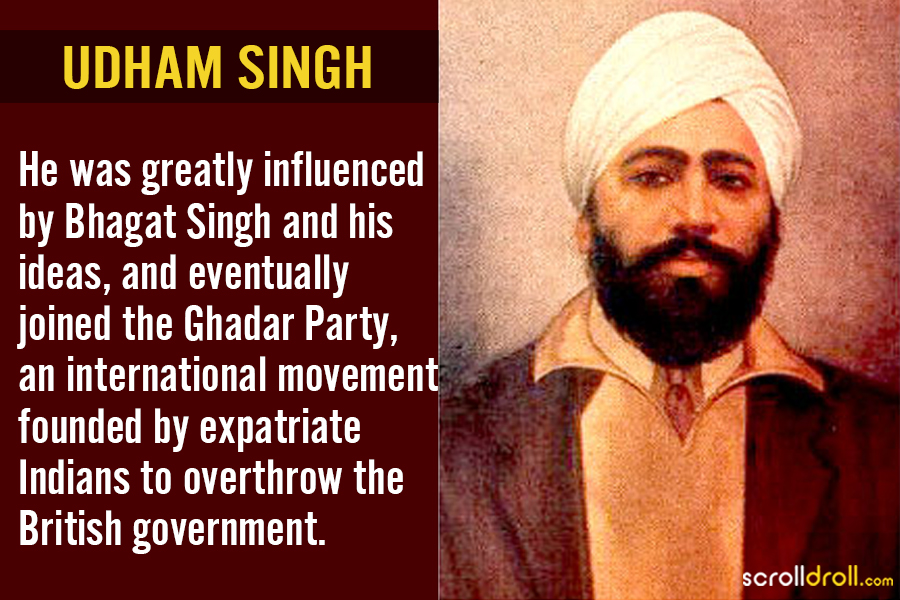 Singh returned to India in 1927 under orders of Bhagat Singh, and was arrested once in India when he was caught with firearms and ammunition. He served five years in jail, and when his term ended in 1931, he was constantly under surveillance. However, he managed to flee to Germany from Kashmir, and then traveled to London. 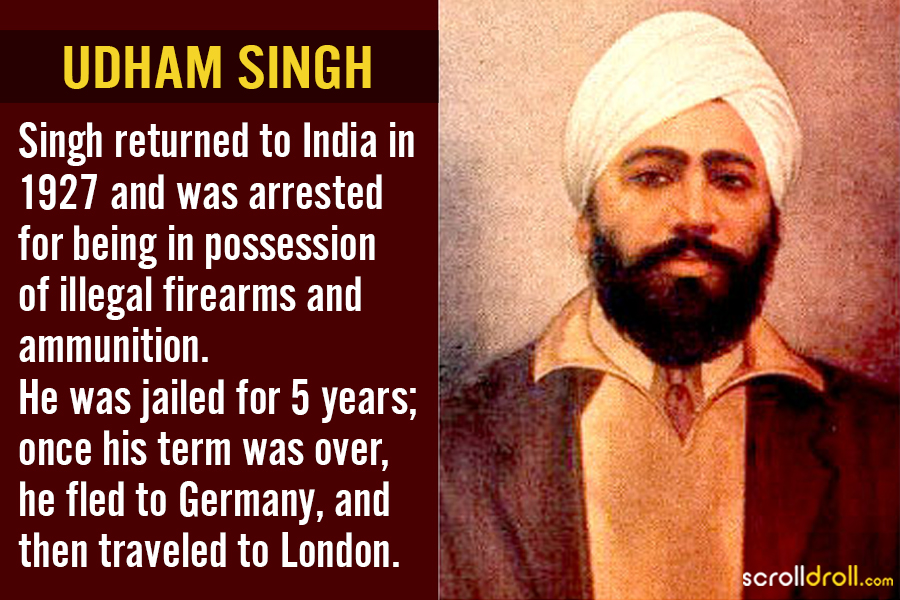 While in London, Sardar Udham Singh adopted an alias for himself: Ram Mohammad Singh Azad, a name that represented all three major religions in India. He spent years in London, where he found employment as an engineer while he privately worked on his plan to assassinate Michael O’ Dwyer – the former lieutenant governor of Punjab, who held the position during the massacre, and had publicly condoned Dyer’s actions. There’s also a small possibility that Udham may have confused Dwyer for Dyer, as he was found to have misspelled Dwyer’s name several times in his meticulously maintained diaries. 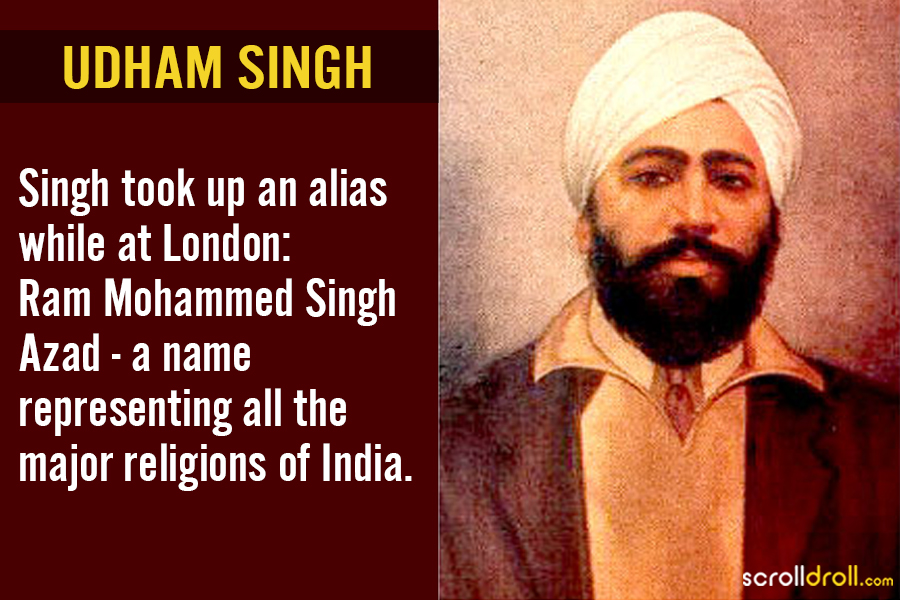 On 13th March, 1940, almost 21 years after the Jallianwalah Bagh Massacre, Uddham Singh finally had the opportunity to do what he had been planning all along – Michael O’Dwyer was supposed to speak at a meeting at Caxton Hall, London. Singh, armed with a revolver that was deftly concealed inside a book (he had cut out a hole inside a book in the shape of a revolver), shot Dwyer twice. One of the bullets pierced his lung, killing him instantly. 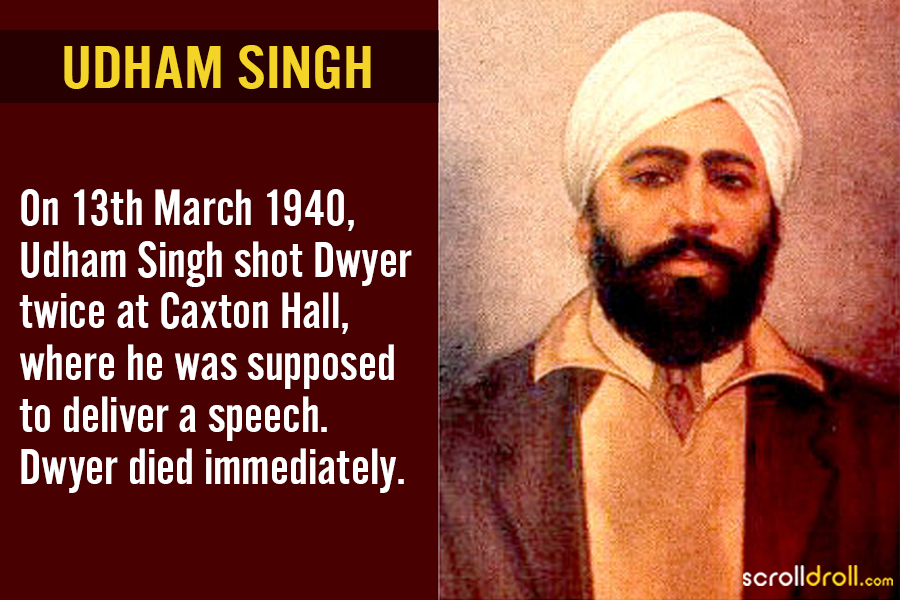 Instead of running away, Singh apparently just stood there, until police officers reached the spot and arrested him. While awaiting his trial, Singh went on a 42-day hunger strike. He had to be eventually force-fed. Singh was given capital punishment, and was executed 31st July the same year. 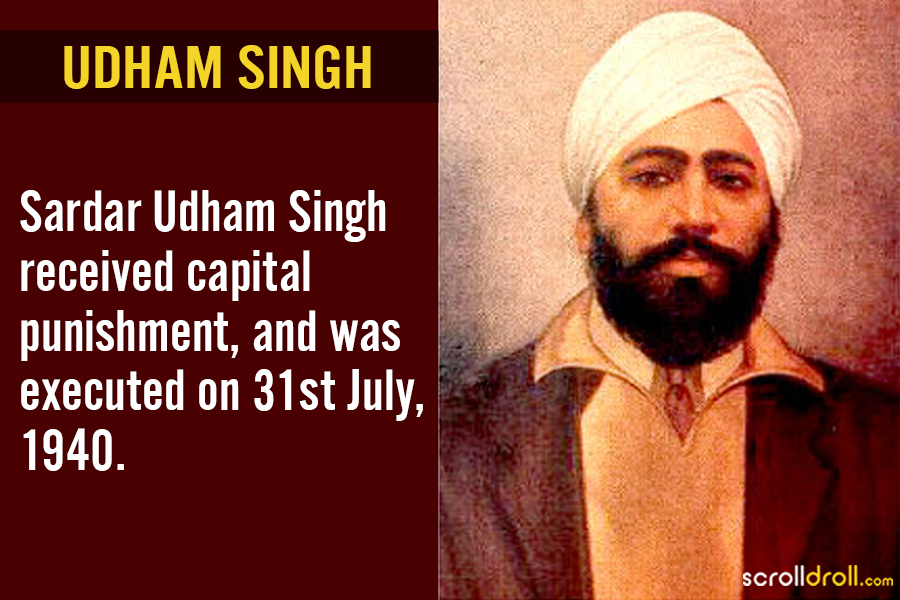 Singh delivered an impassioned speech against British rule during his trial; the speech was not released to the press for several decades because of the judge’s orders. In 1996, however, a group of political activists was able to run a successful campaign that finally made this speech accessible to the public. At one point, Udham Singh was heard saying,

“I am not afraid to die. I am proud to die, to have to free my native land and I hope that when I am gone, I hope that in my place will come thousands of my countrymen to drive you dirty dogs out; to free my country.” 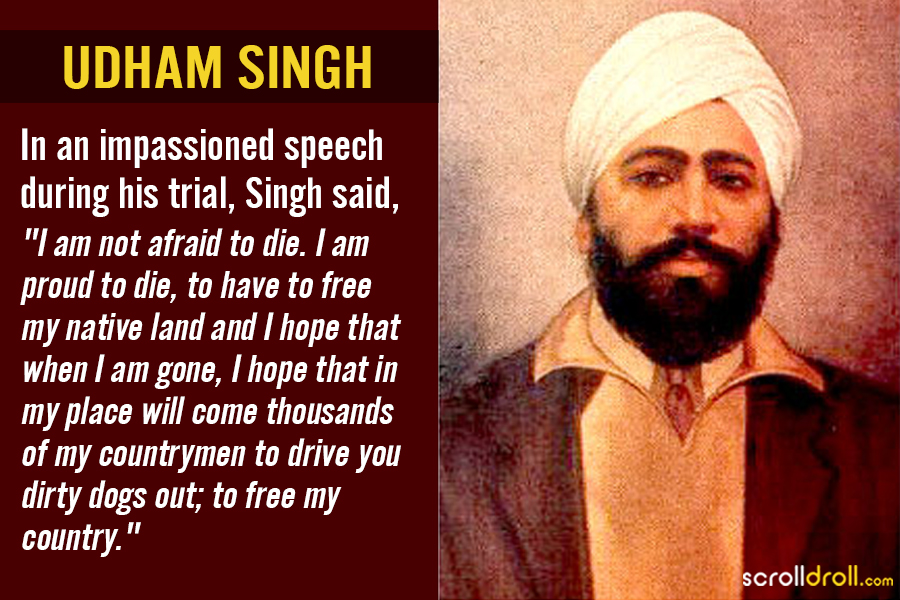 Posthumously, Sardar Udham Singh was recognised for his sacrifice that contributed to the Indian struggle for independence. In 1995, the Mayawati government renamed a district in Uttar Pradesh to Udham Singh Nagar (now in Uttarakhand) in his honour. Singh’s remains rest at Jallianwallah Bagh; other items that belonged to him pertaining to the assassination, including the weapon, his diary, a knife, and a bullet are kept at the Black Museum of Scotland Yard.

We salute Udham Singh’s bravery and his dedication towards the cause of independence, and we hope you liked reading this story!

15 Inventions and Discoveries of India That Revolutionised The World!