13 Most Beautiful Waterfalls in India You Should Visit

India is blessed with a number of perennial and seasonal rivers. These rivers make their way through valleys, plateaus and cliffs, and along their way, they sometimes make stunning drops hundreds of feet below. Witnessing these insane drops and scintillating waterfalls should certainly be in every nature lover’s travel itinerary. We bring to you a comprehensive guide to 13 such mesmerizing waterfalls in India that you shouldn’t miss at any cost.

Jog Falls in the Shimoga District of Karnataka is one of the most famous and tallest waterfalls in India. During the monsoon season, 3.4 million tonnes of water gushes down the 853 ft drop making it a spectacular affair. It is not just the one stream of the Sharavathi River that turns into the breathtaking waterfall but a combination of four cascades commonly known as Raja, Rani, Rover, and Rocket. Jog Falls is close to the some of the major cities of Karnataka like Bangalore and Mangalore. 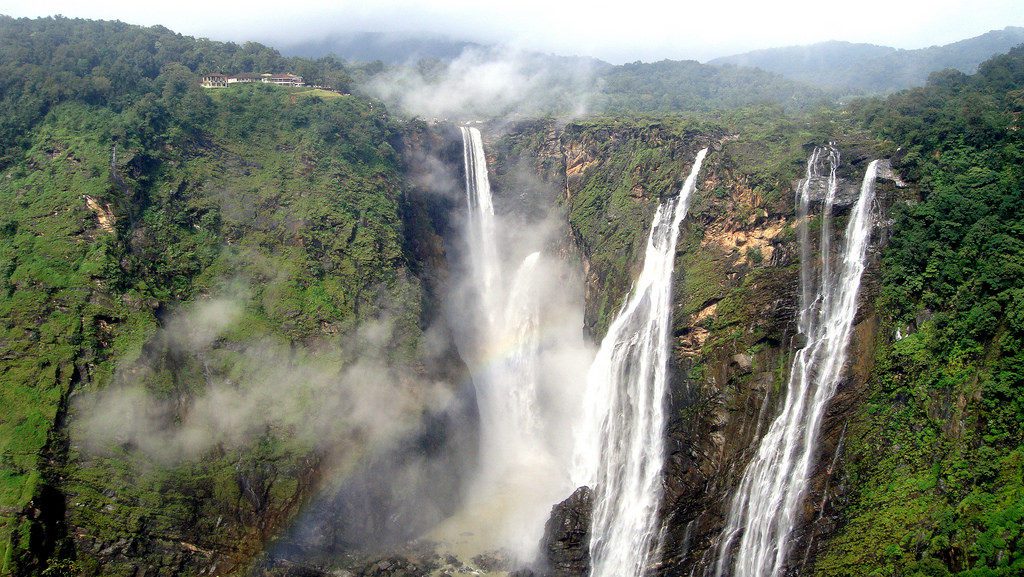 Dudhsagar Falls get their name for their milky appearance when seen from a distance. With a height of 1017 feet and an average width of 100 feet, it is one of the highest waterfalls in India. What makes the waterfall unique is its proximity from the Madgaon-Belgavi Rail Route which crosses the waterfall between its two tiers. The waterfall made by Mandovi River lies on the border of Goa and Karnataka and is surrounded by Mollem National Park and Bhagwan Mahavir Sanctuary. Dudhsagar Falls is one of the most prominent rail route destinations and is very popular among tourists. 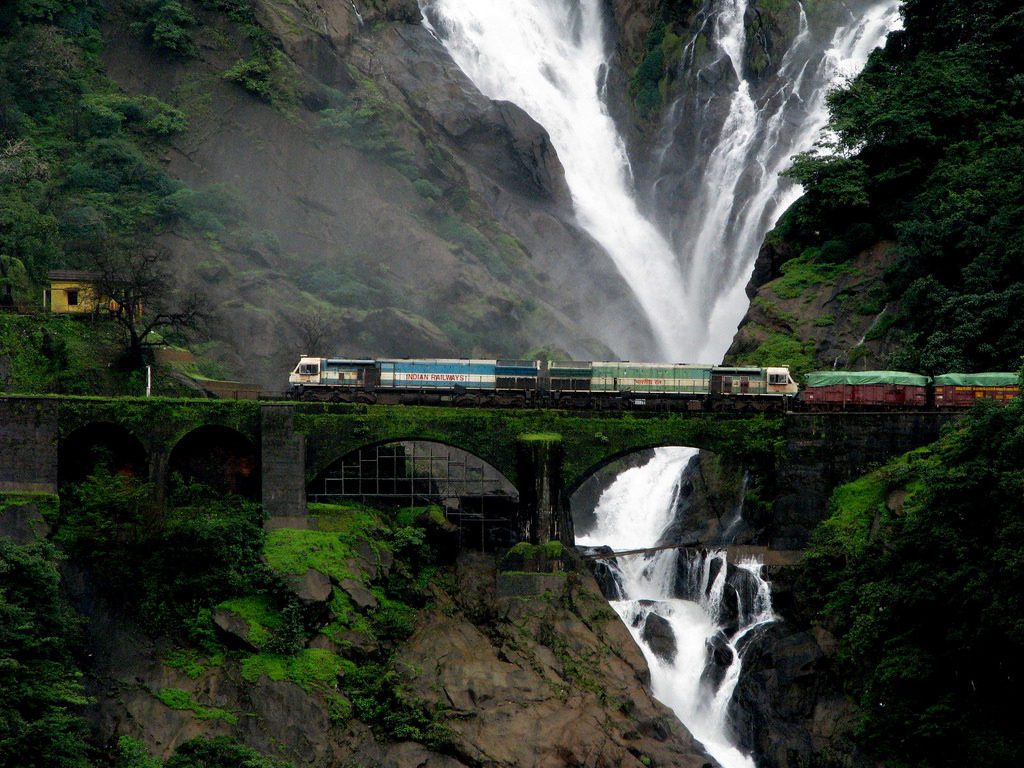 Another gem from the Konkan region, Thoseghar falls are one of the lesser known waterfalls of India. The falls from the Satara District of Maharashtra are a series of waterfalls of approx 200 ft. The best season to visit this breathtaking waterfall is from July to November when this region experiences heavy rainfall. The place around the waterfall looks astonishing with lush green trees and a massive lake. The natural beauty of the fall is still preserved because of its relatively difficult accessibility and thus, it is an interesting location to mark on your travel wish list. 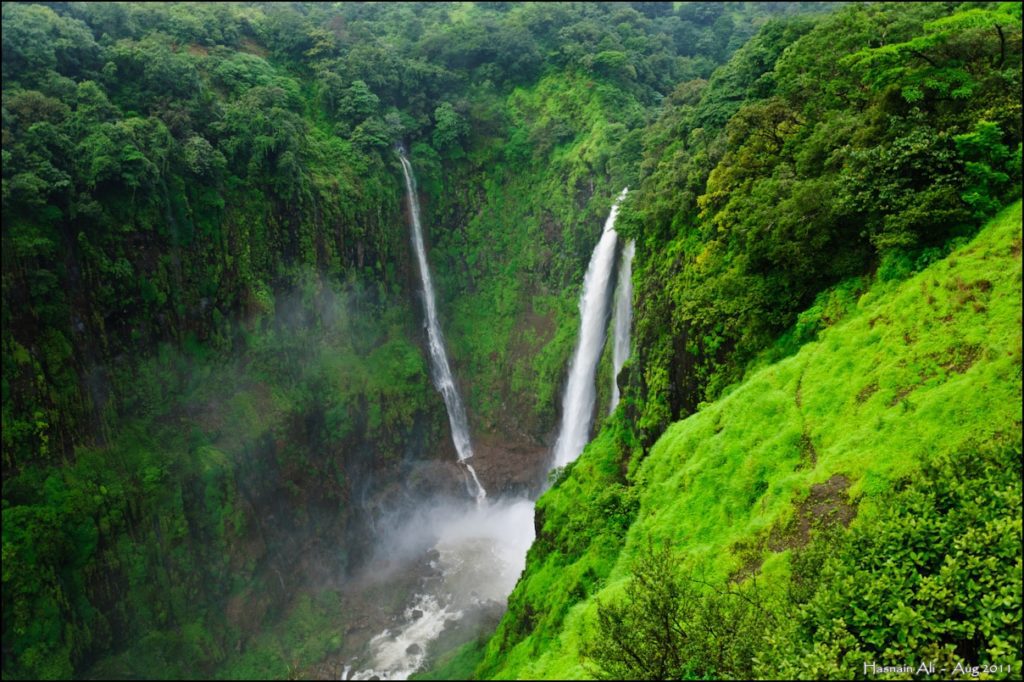 Birthi Falls from Uttarakhand is the first waterfall from North India on our list. Unlike the falls mentioned above, this magnificent waterfall is surrounded by snow-clad mountains. The 400 ft tall fall is located at 2000 meters above the sea level on the Kumaon Mountains. To reach there is a 14 km trek from Tejarm in the Pithoragarh district. The surrounding areas are just as beautiful, with plenty of interesting destinations to visit. The place even finds mention in Rig Veda and Skanda Purana.

Nohkalikai Falls is the tallest plunge waterfall in India. Plunge waterfalls are waterfalls that drop vertically while losing contact with the underlying cliff face, or bedrock, behind them. On the wettest place on Earth, Cherrapunji, this waterfall makes a direct drop of 1115 ft, making it the highest waterfall in India. It is named after the legend of the mysterious woman Likai who jumped off from the cliff from which the fall originates. What makes this falls even special is that it is fed by rainwater instead of any river, hence it dries up significantly during summers. 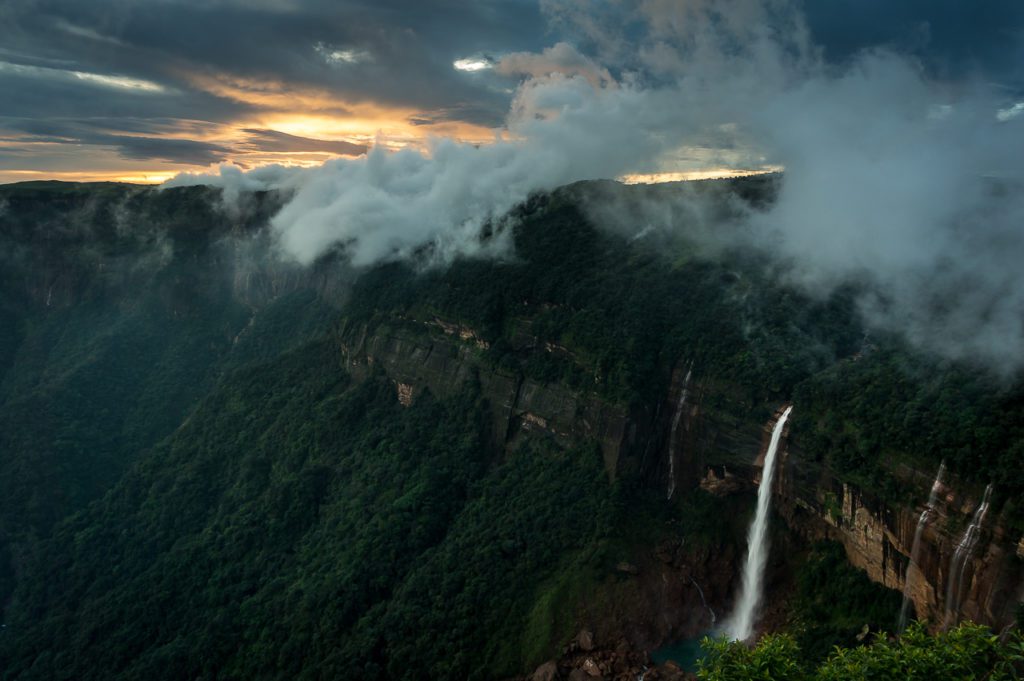 The river Kaveri flows into this magnificent waterfall in the Mandya district of Karnataka. This perennial waterfall lies in the beautiful island town of Shivanasamudra which is divided by the Kaveri River into twin waterfalls – Gaganachukki and Bharachukki. The town also houses a few ancient temples including the famous Sri Ranganathaswamy temple. The waterfall which is collectively called the Shivasamudra falls is best witnessed during the monsoon season and is easily accesible from the Mysore and Bengaluru city. 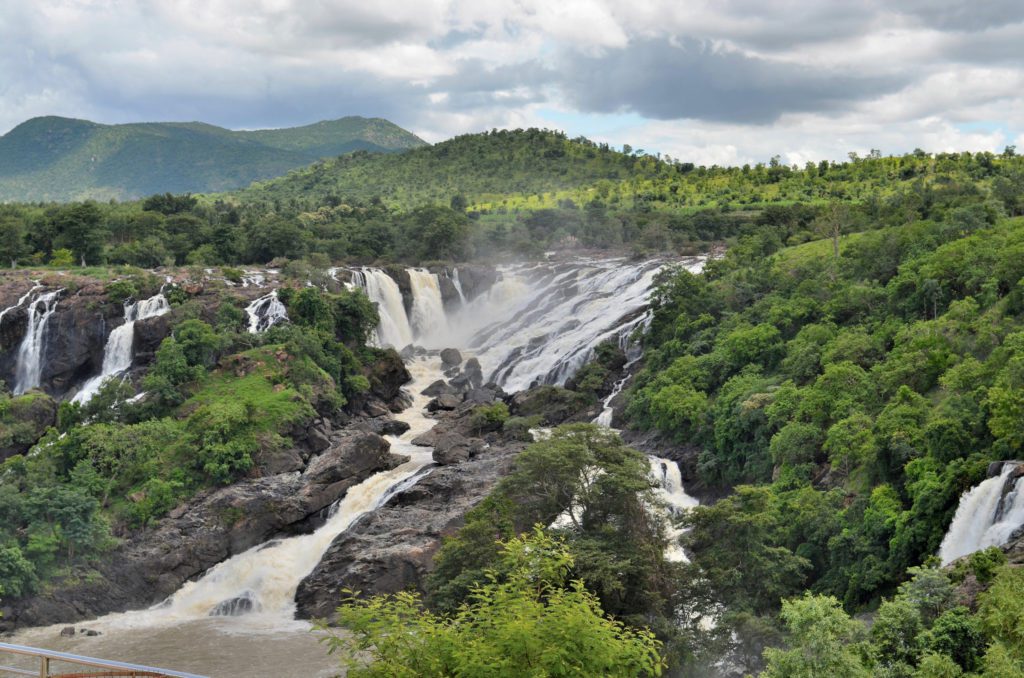 Next on the list are these waterfalls from the land of mysteries and mystical places – Arunachal Pradesh. The Nuranang Falls, also known as the Bong Bong Falls, have a drop of over 300 ft. The falls get their name from a legend of a girl named Nura who helped soldiers during the Sino-Indian War. The place is still unknown to travelers but is spectacular to visit. One can reach the town of Jang where these waterfalls are located by road. 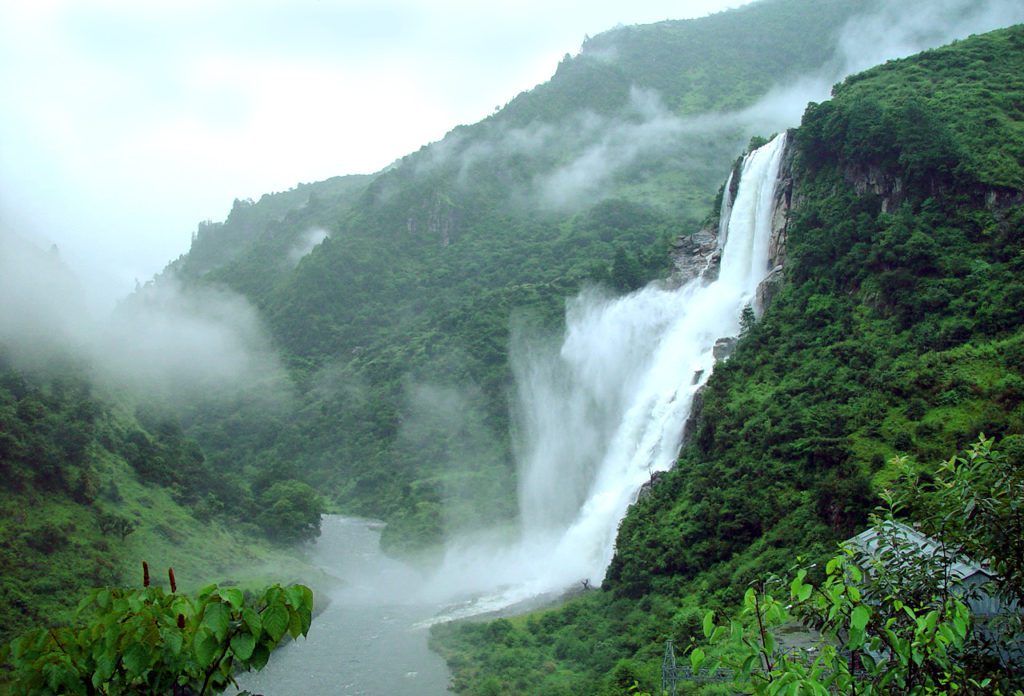 The Indravati River makes a drop of over 100 ft in the district of Bastar, Chattisgarh. This magnificent waterfall known as the Chitrakoot or Chitrakote Waterfall is the widest waterfall in the country. During monsoon season, it is nearly 150 meters wide and is thus referred to as the Niagra Falls of India. You can easily spot rainbows forming over the falls while taking a boat ride along the Indravati River. The best way to reach to the falls is from the city of Jagdalpur which is about 38km away from the falls. 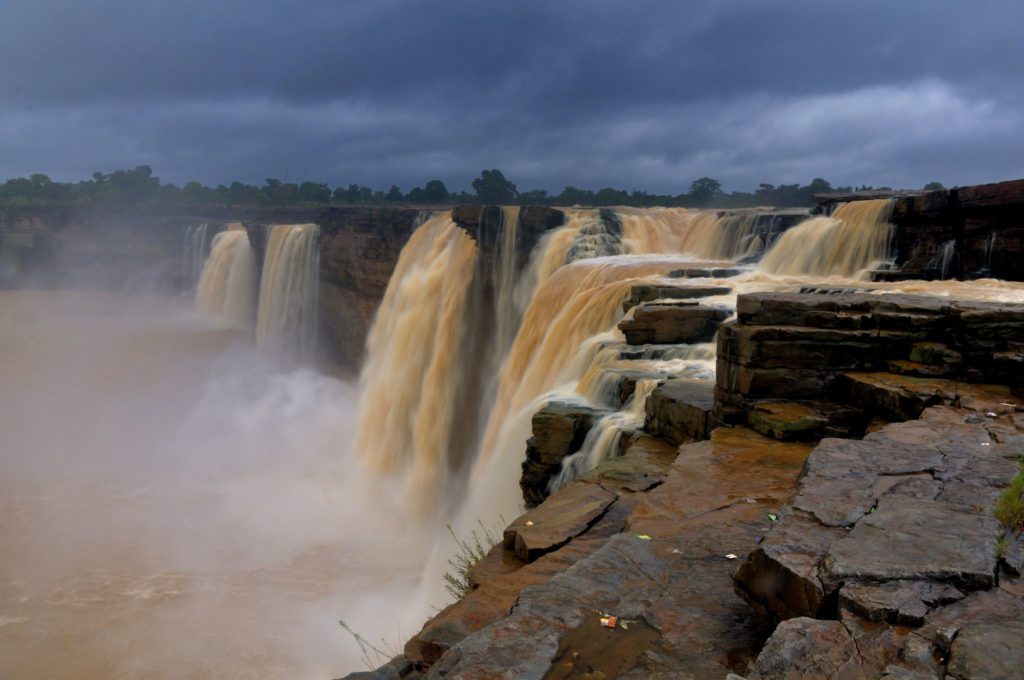 Bhimlat Falls lies in the not much-known city of Bundi in Rajasthan, which is situated 200 km away from the capital city of Jaipur. Bhimlat Falls plunges from a height of 60 meters and it falls into a deep green sea like lake. The falls and the city of Bundi have mythological connections as well. Legend goes that Bheem from the famous Mahabharata created the waterfall. The city also boasts of numerous baolis, forts, and palaces and yet, is not brimming with tourists like other popular destinations in Rajasthan. 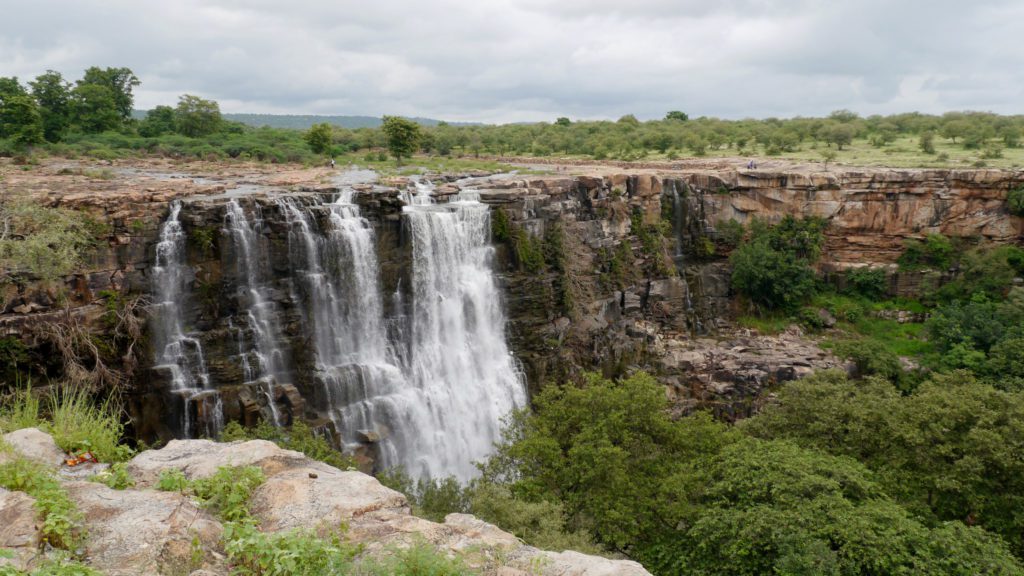 Remember the gigantic waterfalls from the blockbuster Baahubali? Well, it might have been an exaggeration and loads of CGI but the best of the shots were real and taken from this beautiful falls in Kerala. Situated in the Thrissur District of Kerala, Athirapally Falls is truly a natural wonder. The main falls is a drop of 80 ft on Chalakudy River and is the largest falls of Kerala. Along the Sholayar Range, this waterfall is a remarkable sight with its lush greenery and rich flora and fauna. 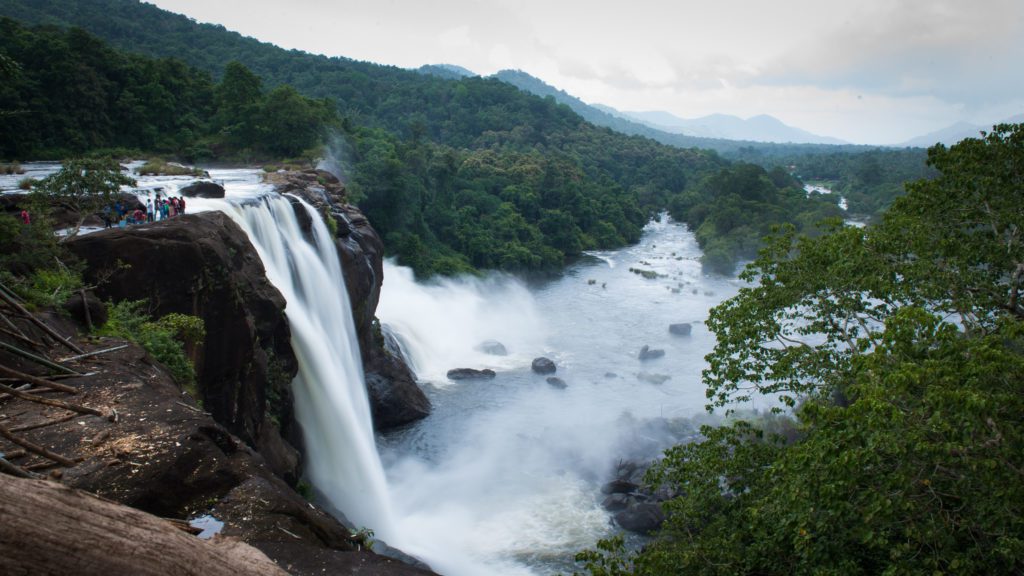 This fall gets its name from the Kannada word hoge and kale which translate to smoke coming out from rocks. What makes the whole location one of a kind is its abundance of Carbonatite and the arrangement of rocks of this composition. The over 60ft drop of the beautiful waterfall makes the whole scenery astonishing. One can reach this waterfall from the Dharmagiri district of Tamil Nadu on the river Kaveri. The major attraction towards this waterfall is boating in coracles, which are boats made out of bamboo. 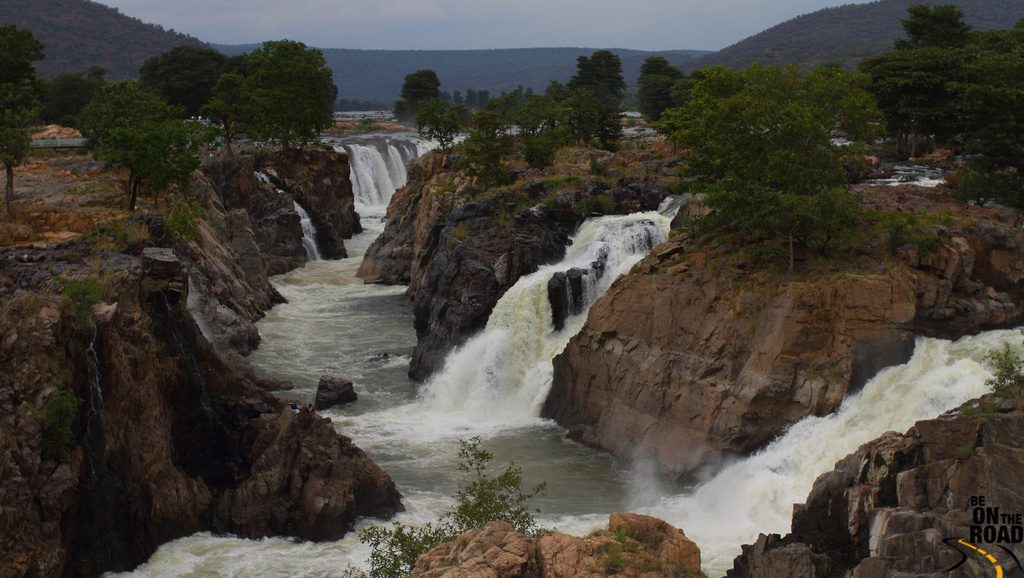 Every travel related list is incomplete without the mention of Lonavala Khandala Valley. That’s why the Kune waterfalls with its huge drop of 330ft make its way into the list. This majestic waterfall is a three-tier waterfall and has the stunning view of Sahyadri Mountains all around it. This fall is one of the most popular tourist places around Pune and attracts hundreds of tourists every month during monsoons. The accessibility of the falls is a stark contrast to the other falls in the list. The falls lie along the old Mumbai Pune Highway and are close to the famous Kune church.

Among the lesser known places in Madhya Pradesh are the Dhuadhar Waterfalls of Jabalpur. The 100ft tall waterfall is just the cherry on top of the panoramic view that it has to offer. Situated in the backdrop of Marble Mountains, Bhedaghat Waterfall, also known as Dhuadhar, is among the best waterfalls of the country. Dhuadhar made its cinematic debut with “Jis Desh Mein Ganga behti hai” and since then it had been a part of the movies like Asoka and Mohenjo Daro. The area is also known for its breathtaking and poetic boat experience and it is also home to crocodiles of the Narmada River. This must surely be on your bucket list! 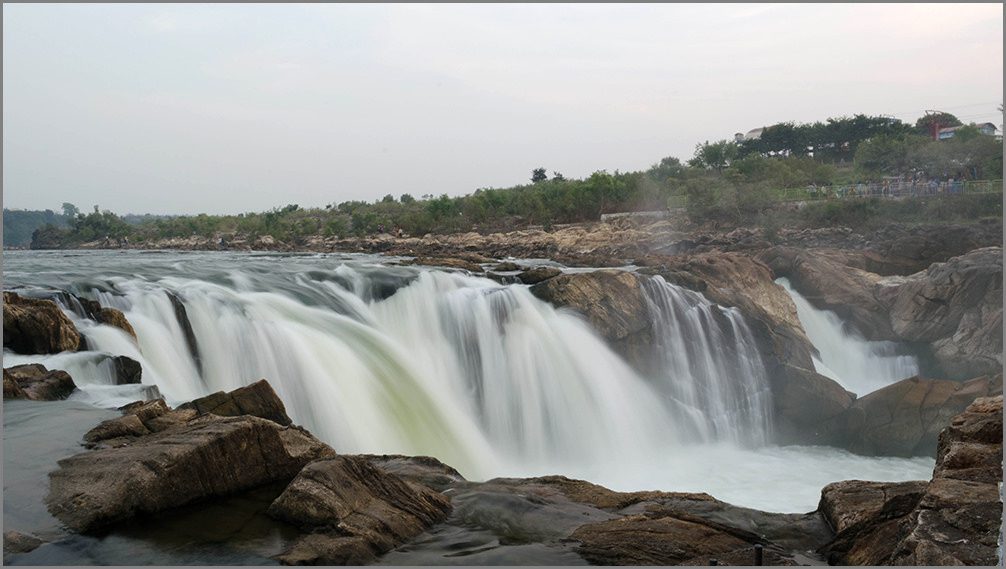 There you have it – the best waterfalls from every corner of the country, including the tallest, the widest, the least known and the most popular. Some of these have even appeared in popular movies. But if we might have missed out on your favorite waterfall, tell us in the comments below.

8 Posters That Show How Commuting In India Is Simply A “NightMare!”