Some of these quotes will inspire you, make you happy and confident. They will urge you to read the book right away, sort of trailers they will be. And some others will make you question your very existence. Whilst reading a book, we always come across that one line that touches us, that makes us wonder, that makes us contemplate. Here is a list of 25 best quotes from books that you may or may not have come across until now. I hope that they have the same effect on you as they had on me. Let’s discover!

1. “To choose doubt as a philosophy of life is akin to choosing immobility as a means of transportation.” – Yann Martel, Life of Pi 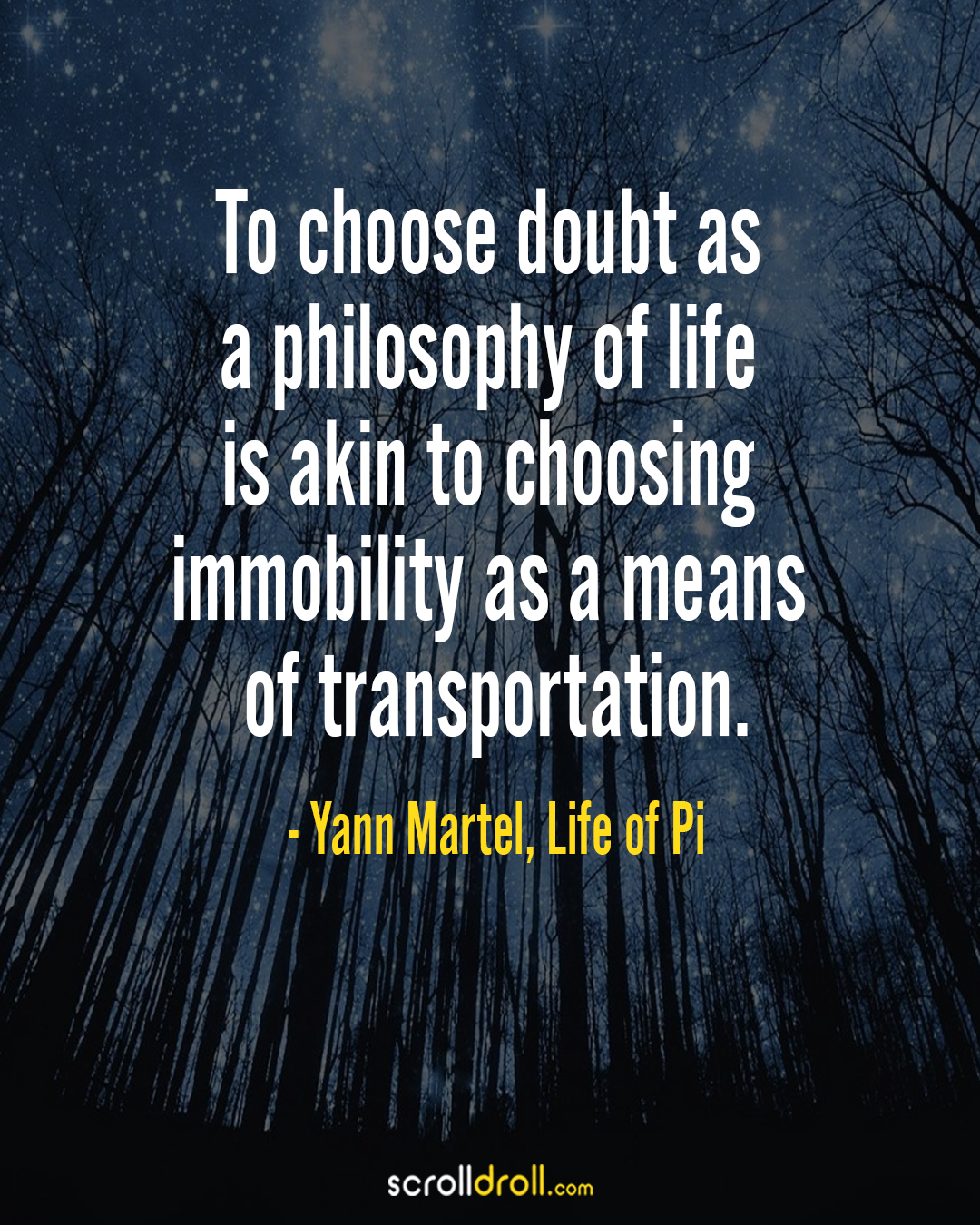 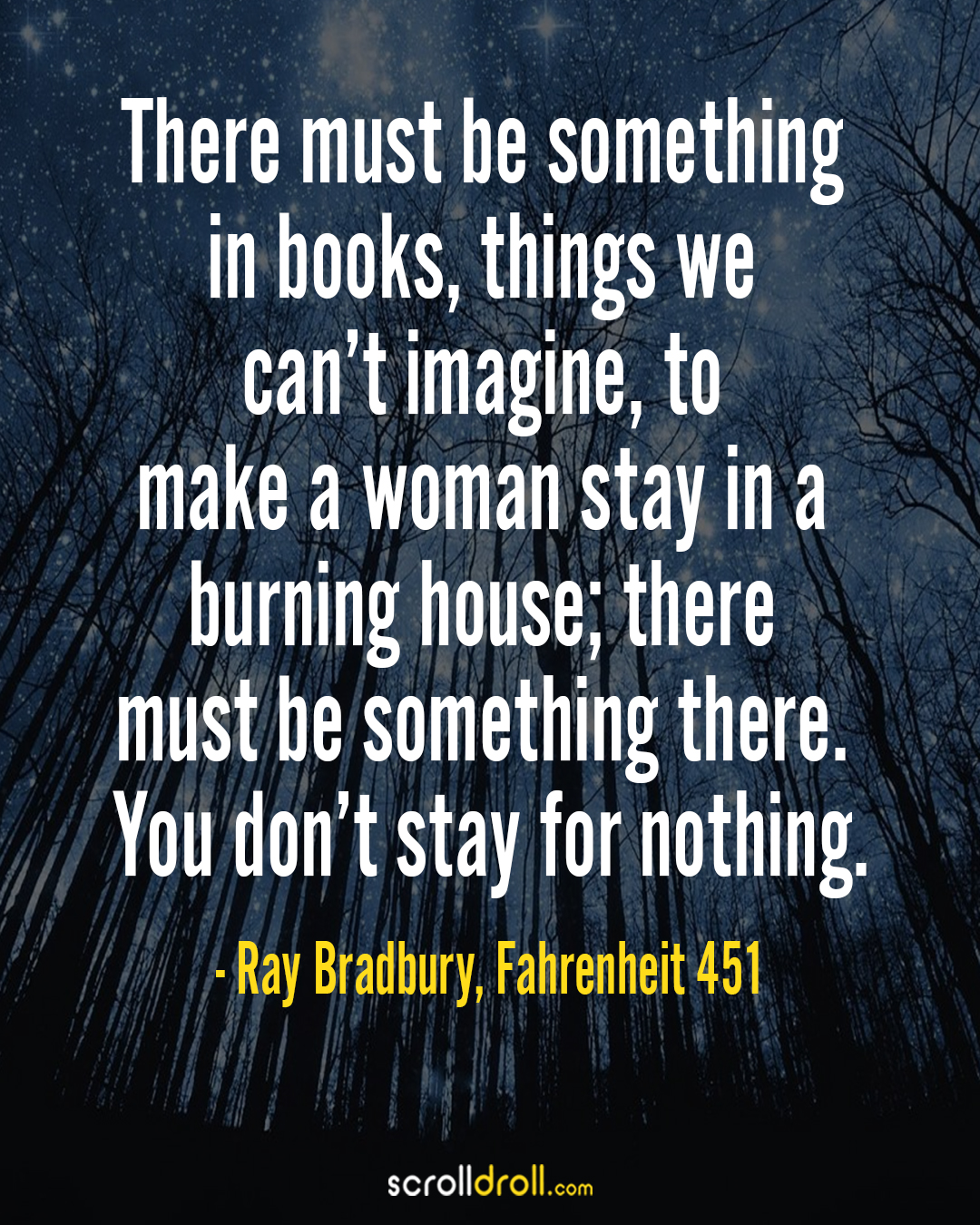 3. “Listen up – there’s no war that will end all wars.” – Haruki Murakami, Kafka on the Shore 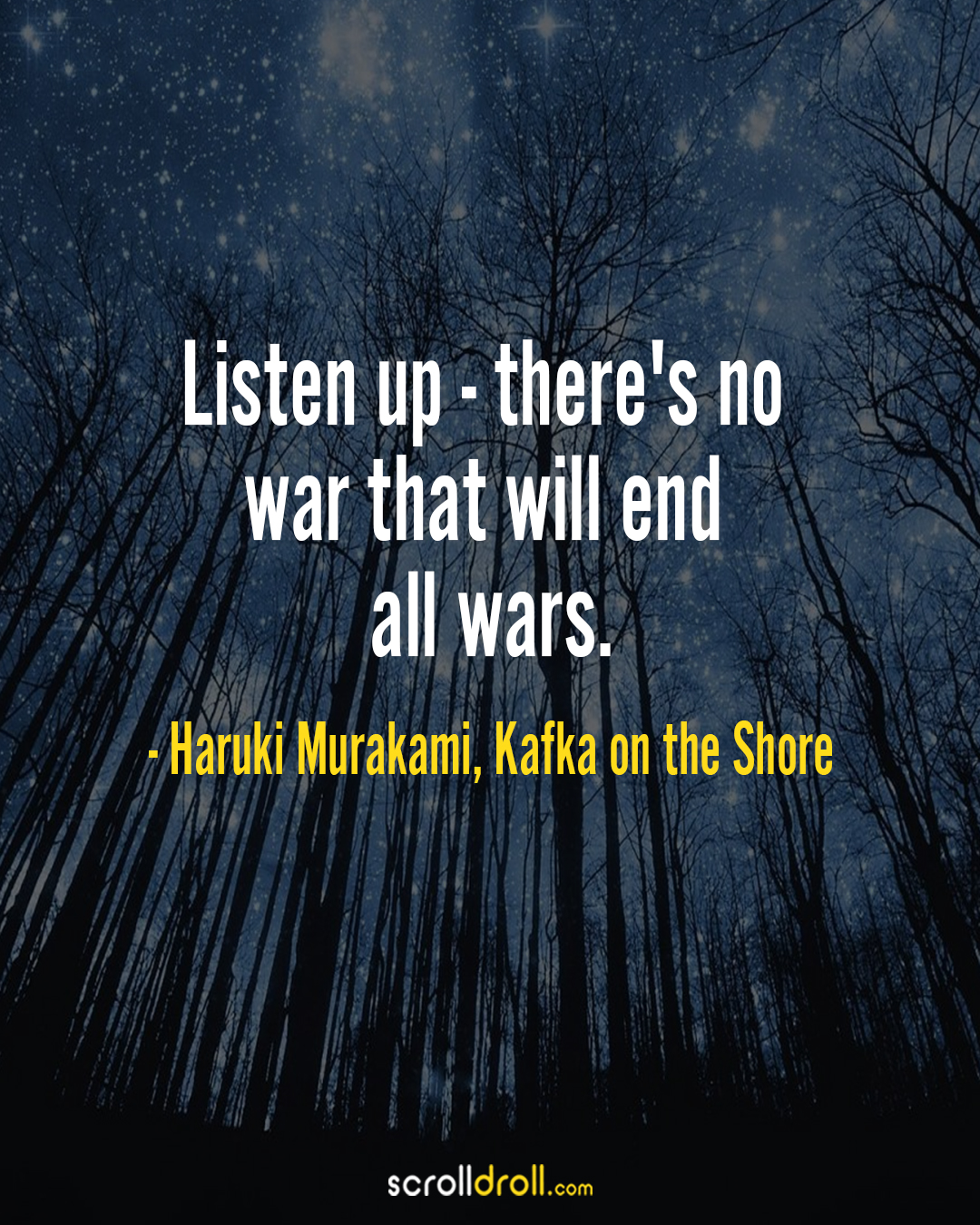 4. “He stepped down, trying not to look long at her, as if she were the sun, yet he saw her, like the sun, even without looking.” – Leo Tolstoy, Anna Karenina 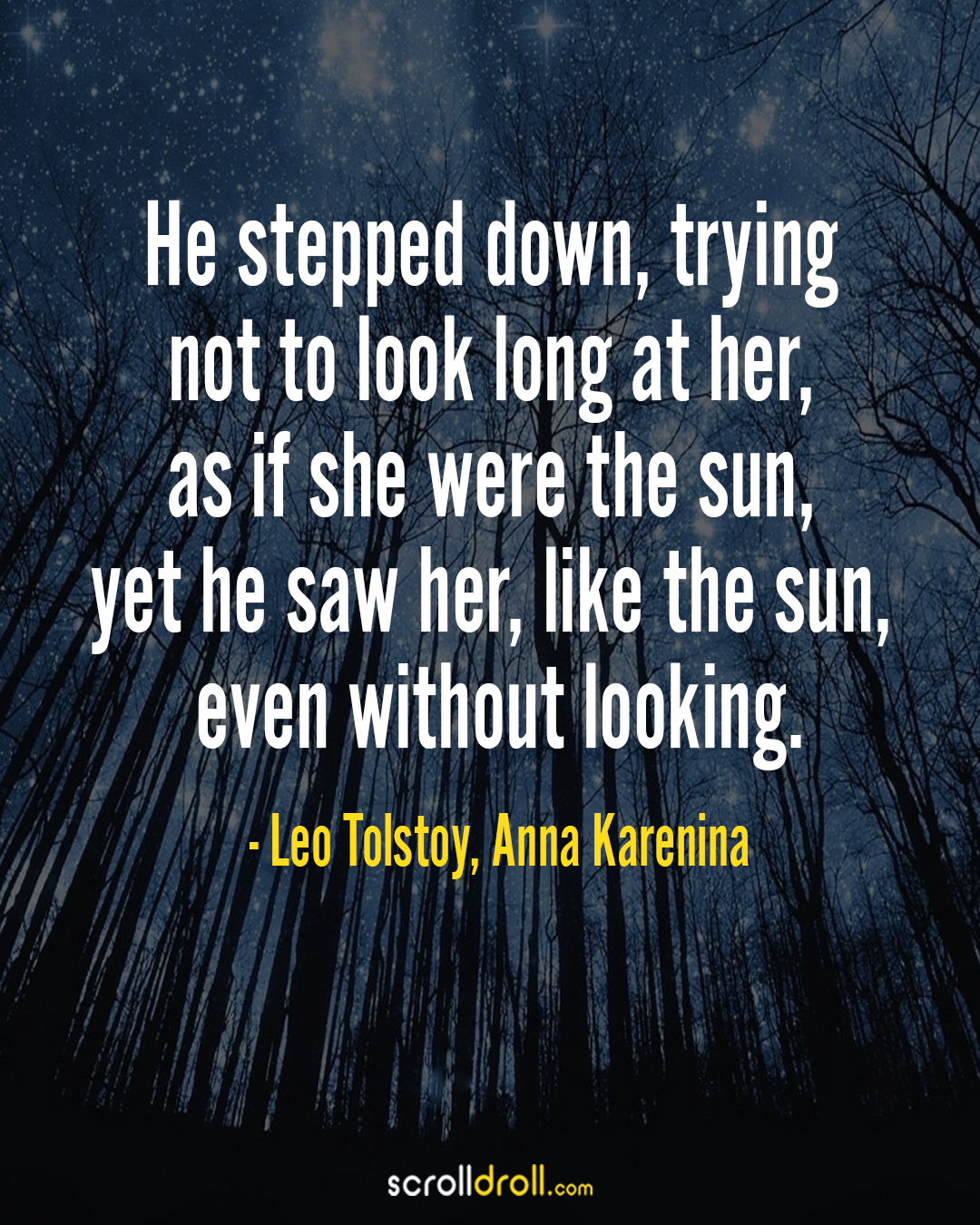 5. “We dream in our waking moments, and walk in our sleep.” – Nathaniel Hawthorne, The Scarlet letter 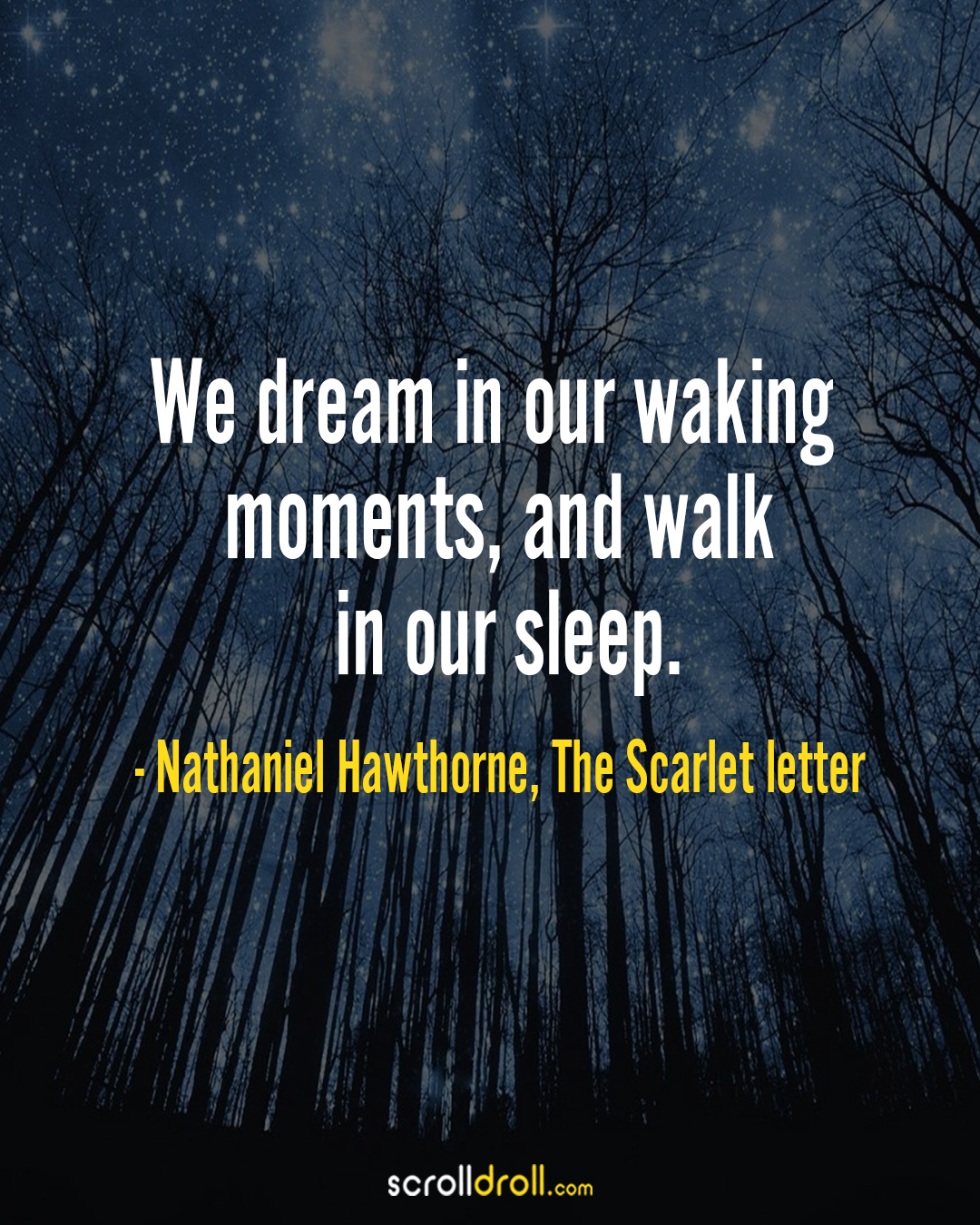 6. “A man’s heart is a wretched, wretched thing. It isn’t like a mother’s womb. It won’t bleed. It won’t stretch to make room for you.” – Khaled Hosseini, A Thousand Splendid Suns 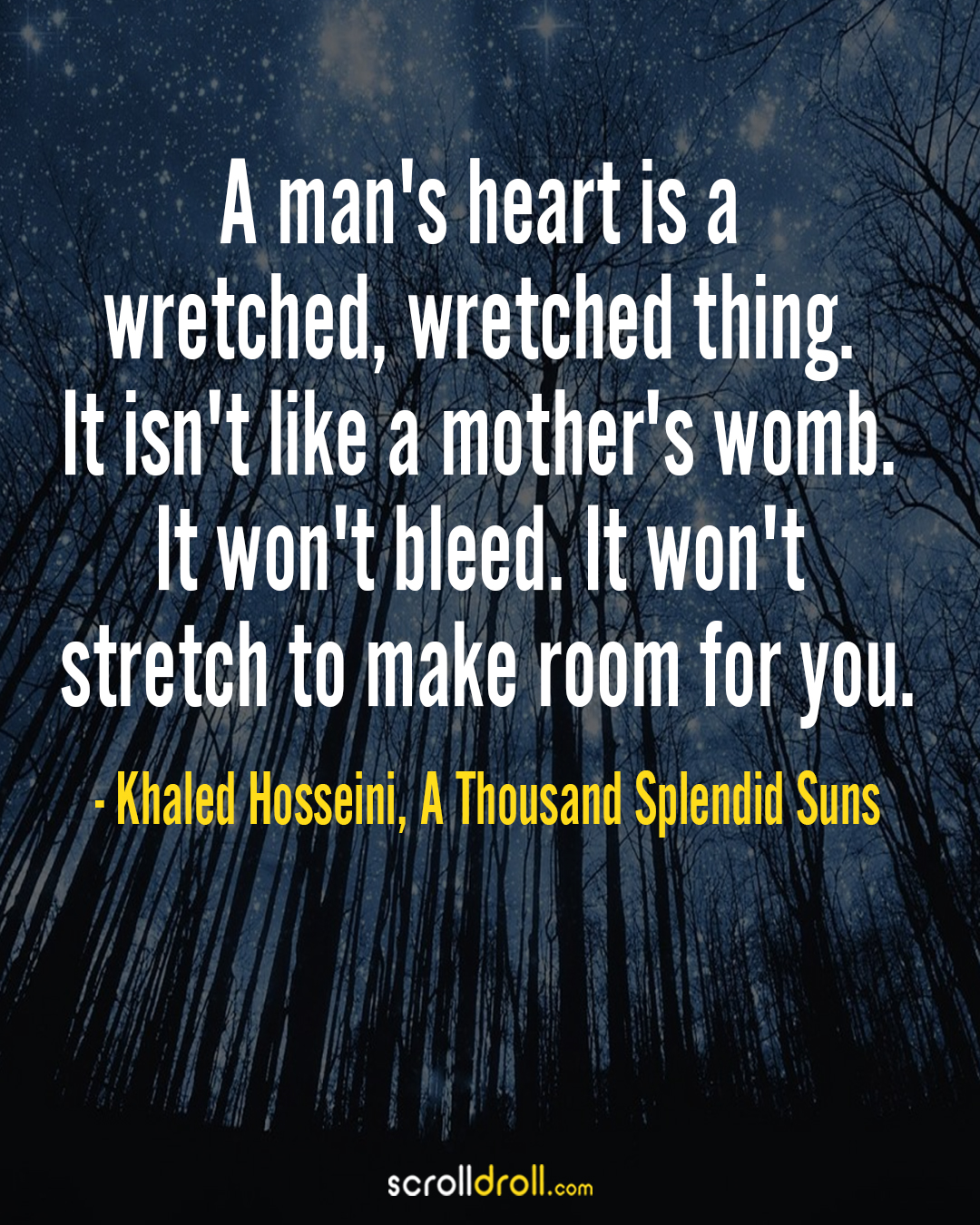 7. “The great danger of lying is not that lies are untruths, and thus unreal, but that they become real in other people’s minds.” – Christine Leunens, Caging Skies: A Novel 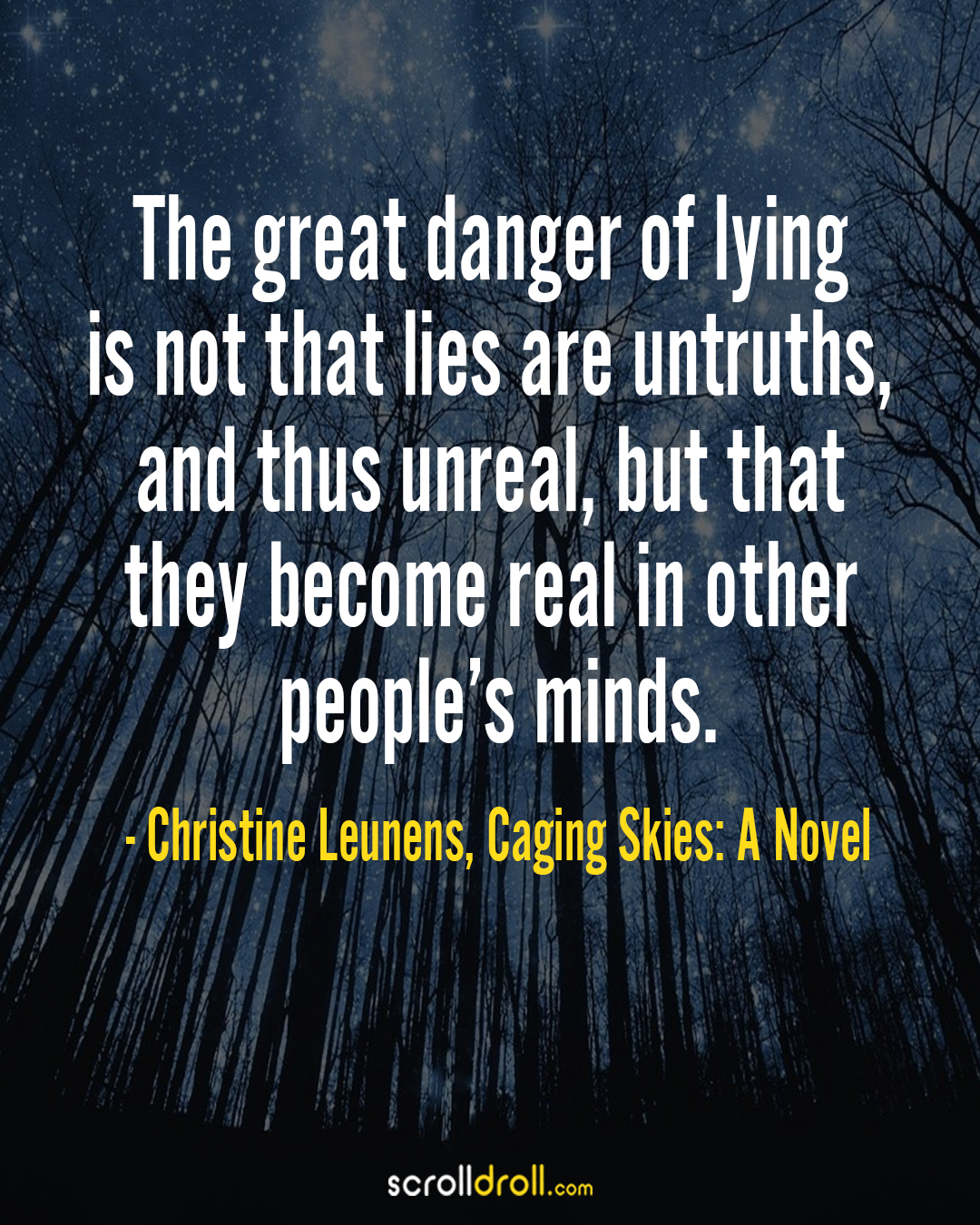 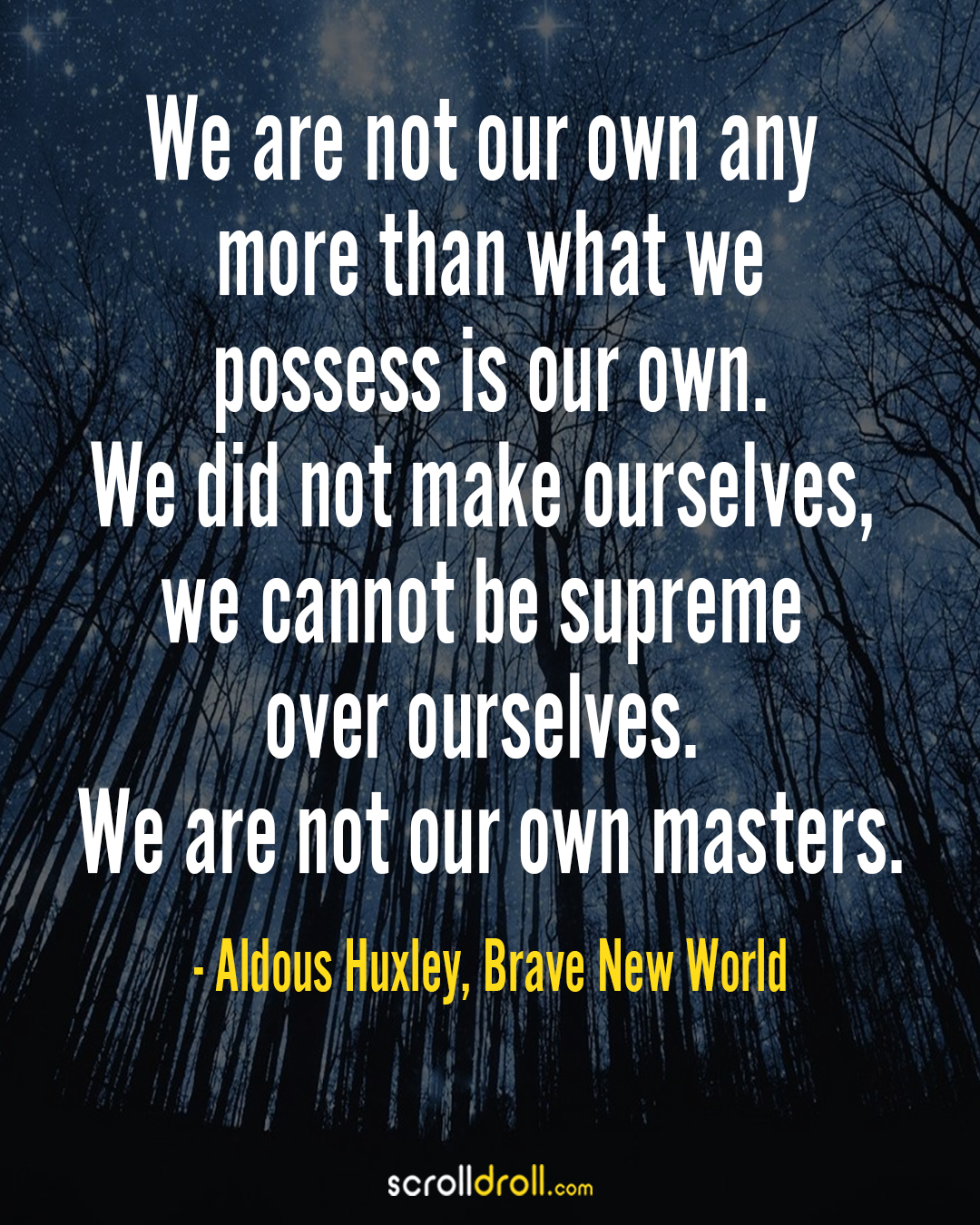 9. “Seldom, very seldom, does complete truth belong to any human disclosure; seldom can it happen that something is not a little disguised or a little mistaken.” – Jane Austen, Emma 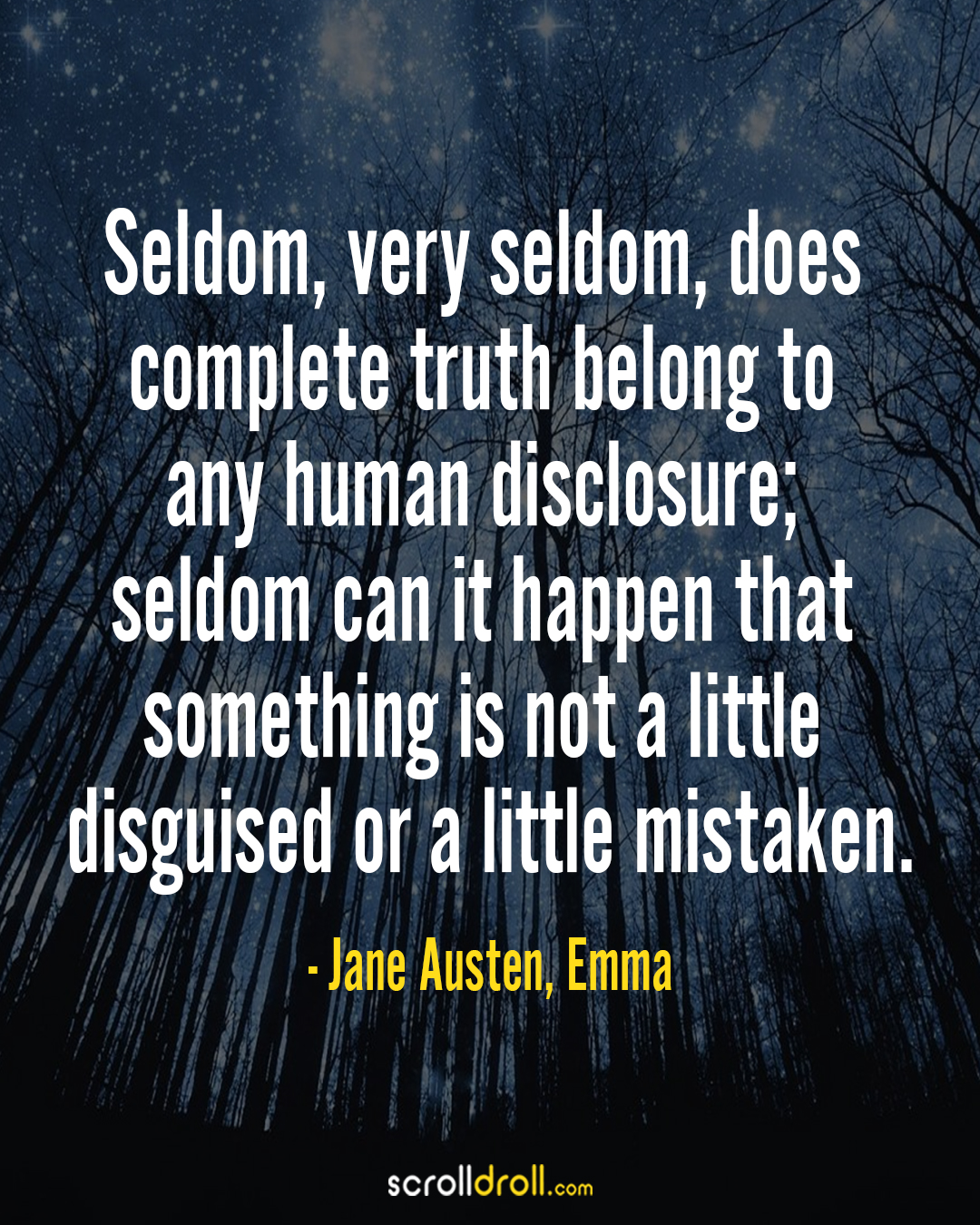 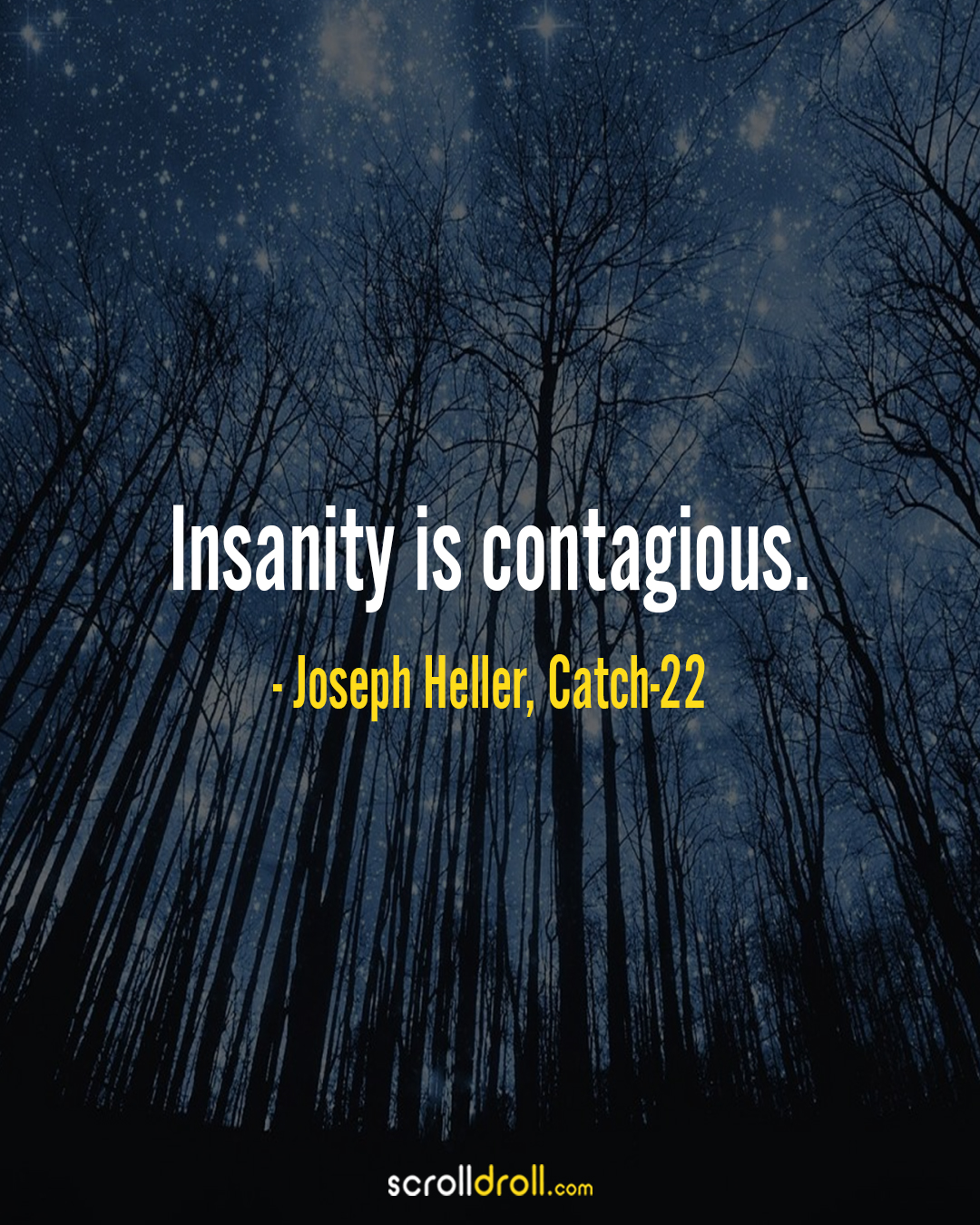 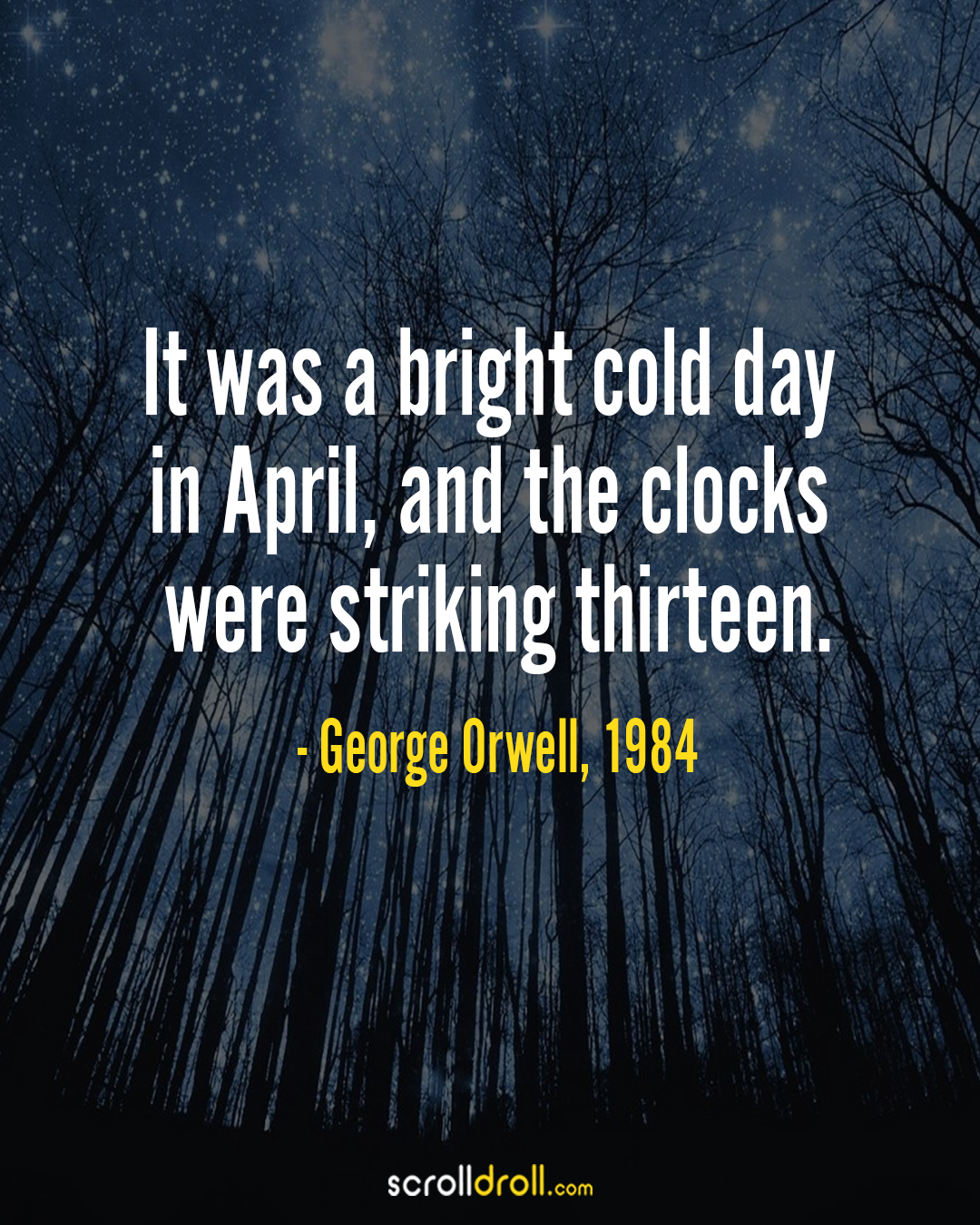 12. “You never really understand a person until you consider things from his point of view…Until you climb inside of his skin and walk around in it.” – Harper Lee, To Kill A Mockingbird 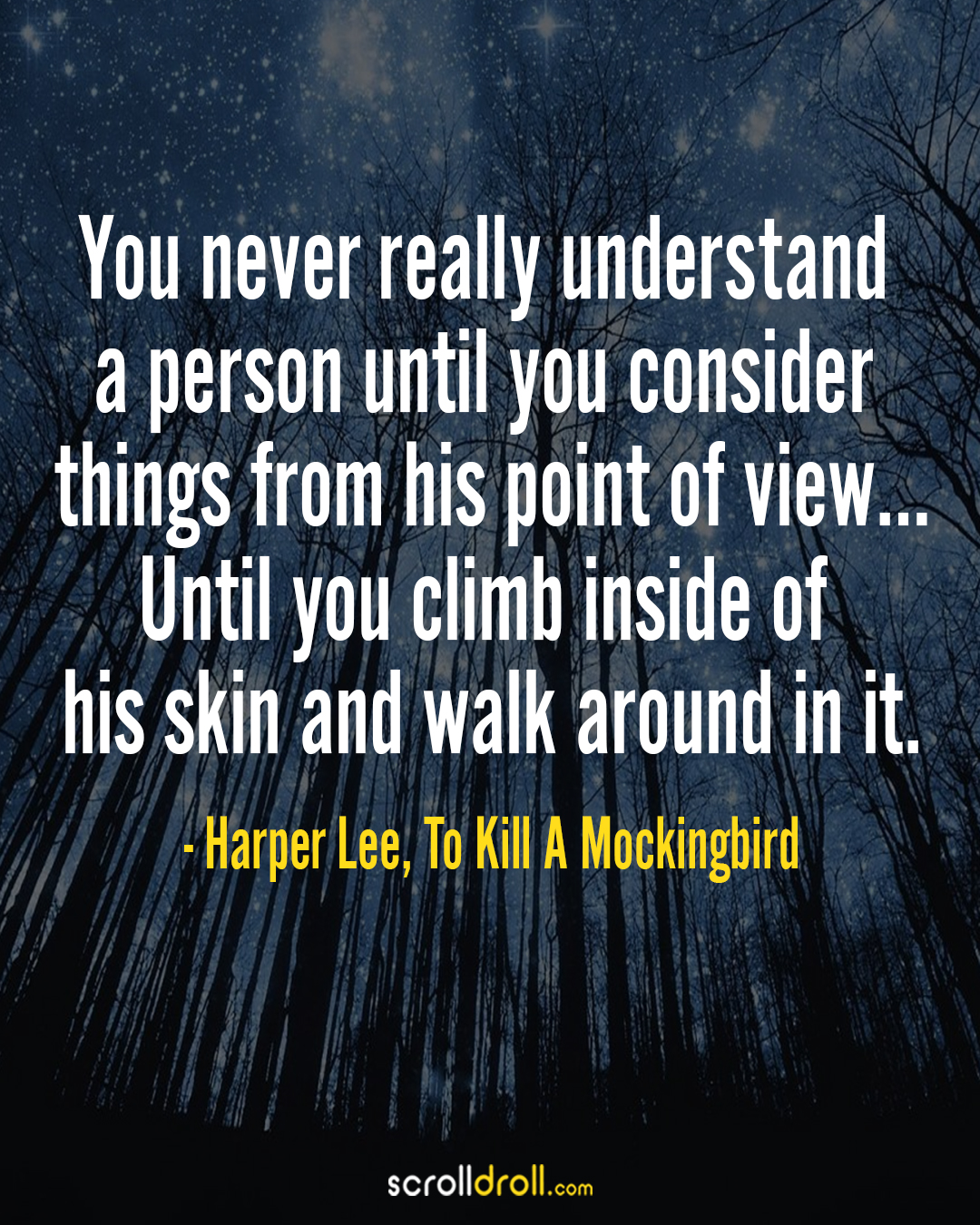 13. “It is a fair, even-handed, noble adjustment of things, that while there is infection in disease and sorrow, there is nothing in the world so irresistibly contagious as laughter and good humour.” – Charles Dickens, A Christmas Carol 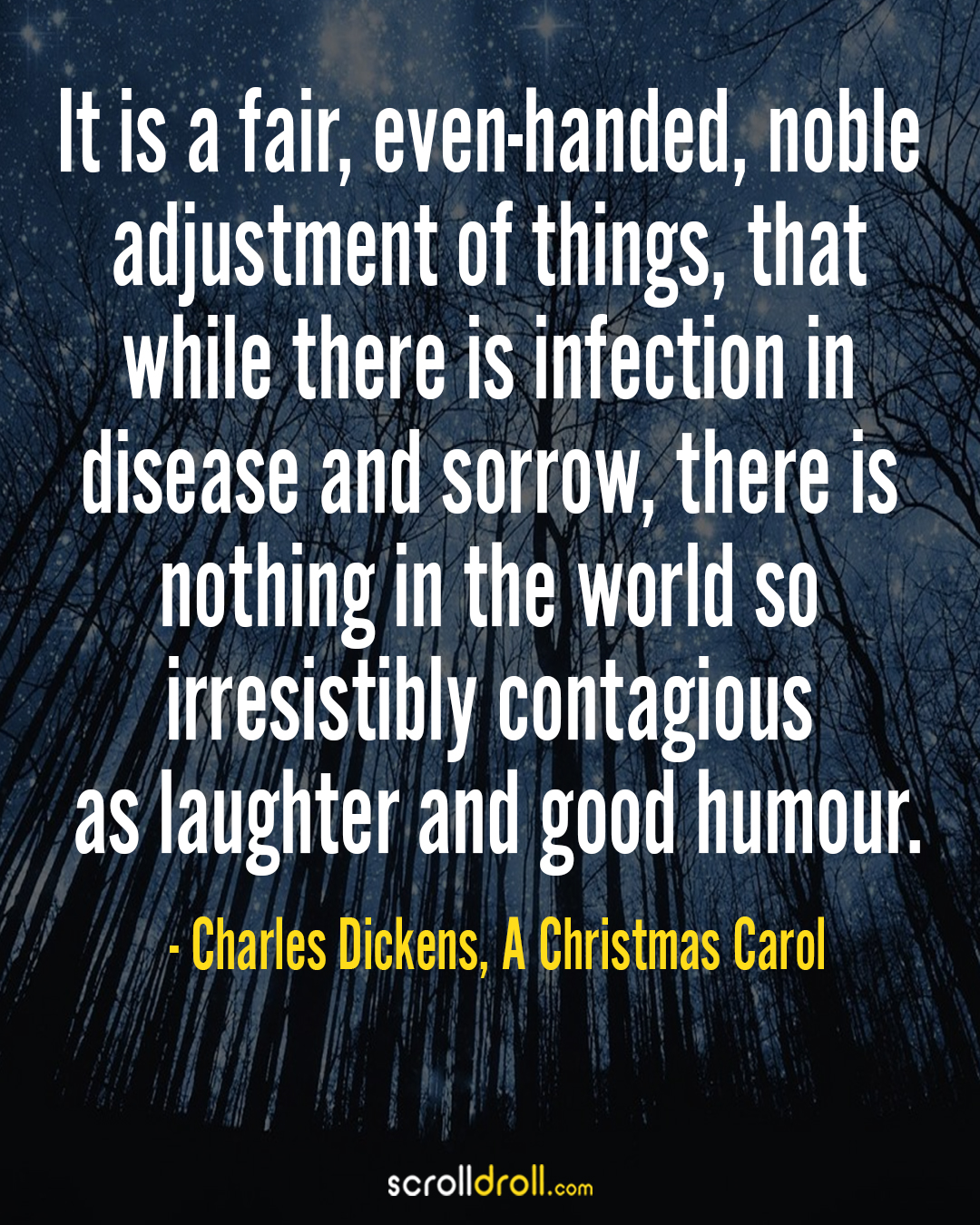 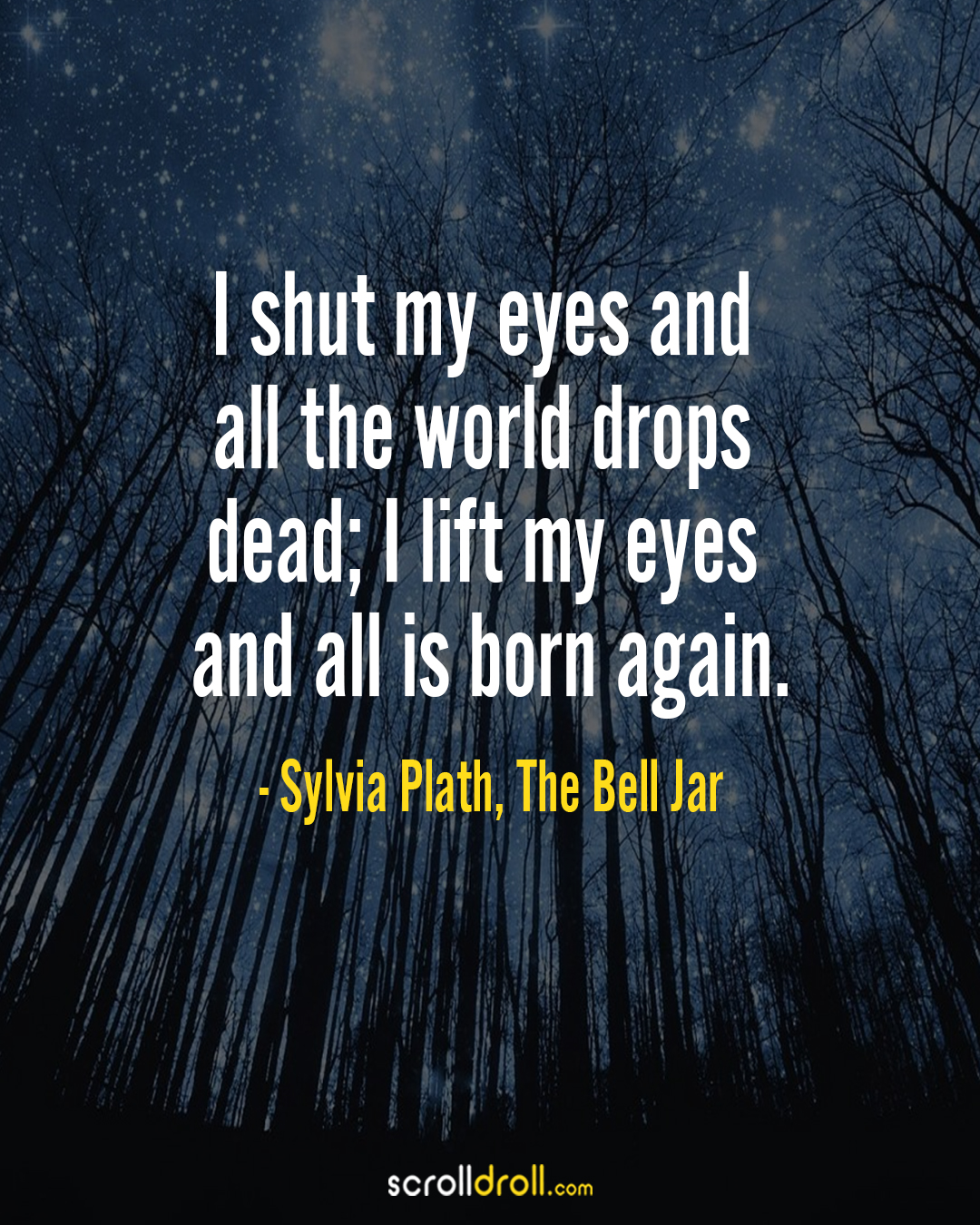 15. “Nowadays people know the price of everything and the value of nothing.” – Oscar Wilde, The Picture of Dorian Grey 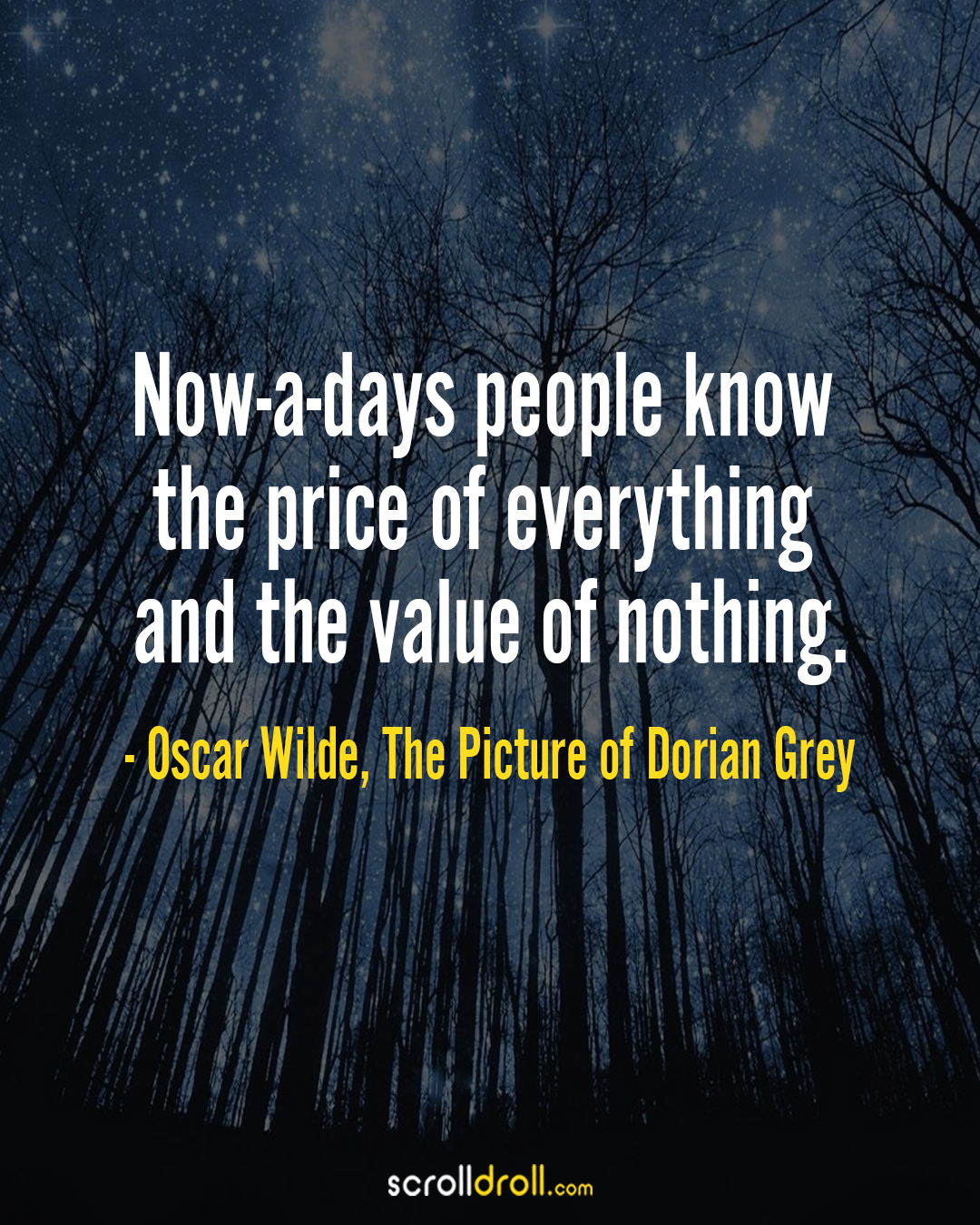 16. “When one writes a novel about grown people, he knows exactly where to stop – that is, with a marriage; but when he writes about juveniles, he must stop where he best can.” – Mark Twain, The Adventures of Tom Sawyer 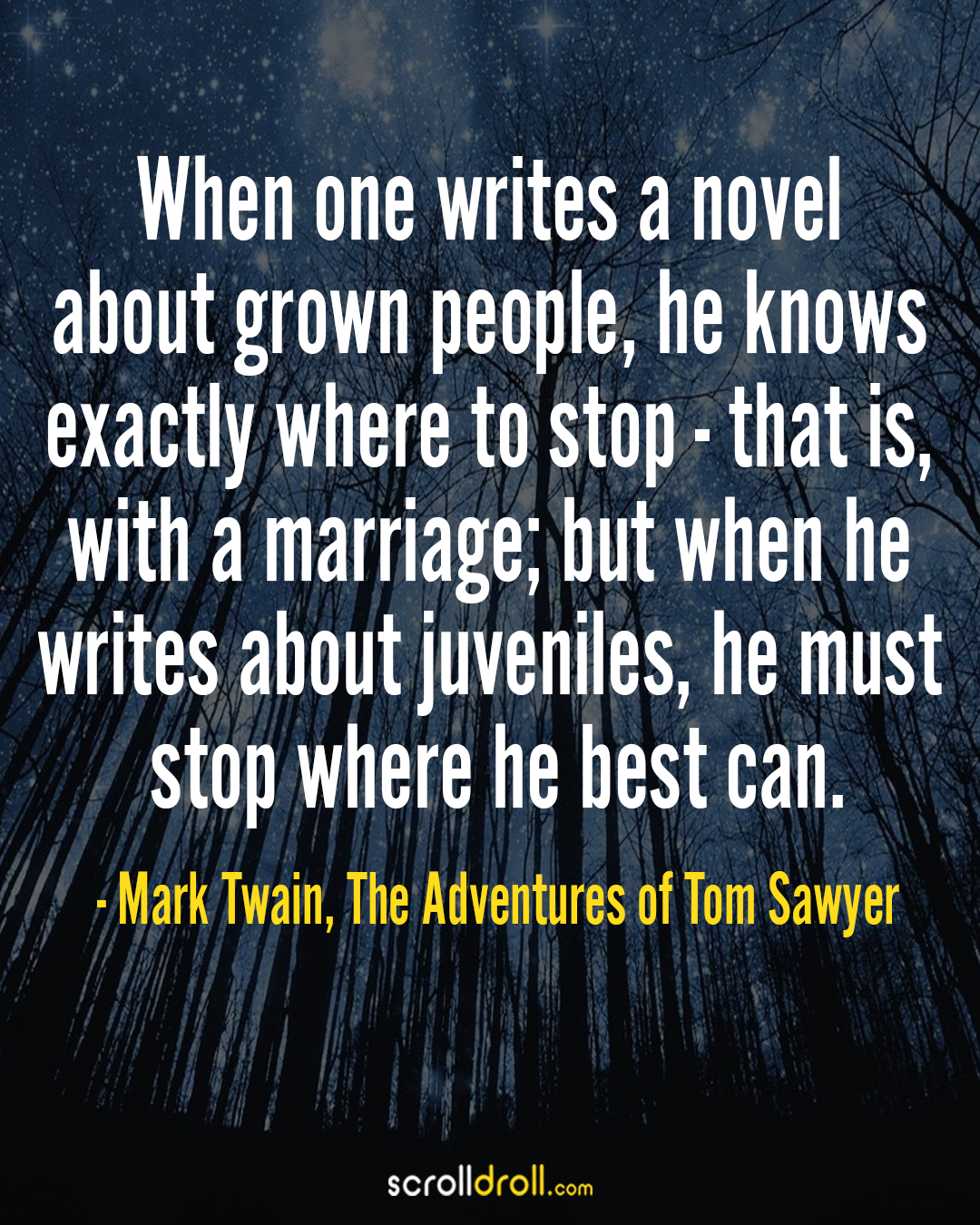 17. “Let us learn to show our friendship for a man when he is alive and not after he is dead.” – F. Scott Fitzgerald, The Great Gatsby 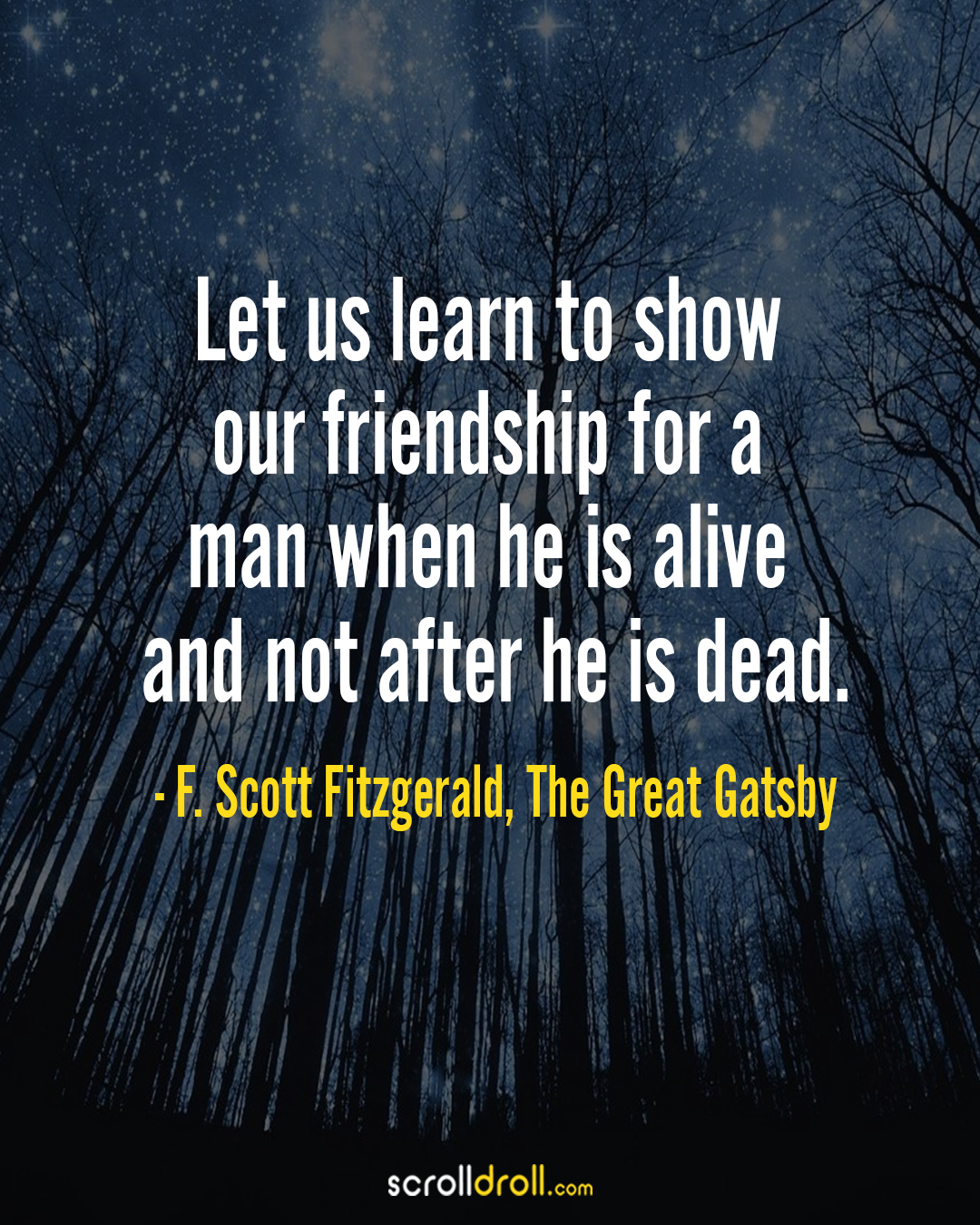 18. “A man of genius makes no mistakes. His errors are volitional and are the portals of discovery.”- James Joyce, Ulysses

19. “Happiness can be found, even in the darkest of times, if one only remembers to turn on the light.” – J.K.Rowling, Harry Potter and the Prisoner of Azkaban 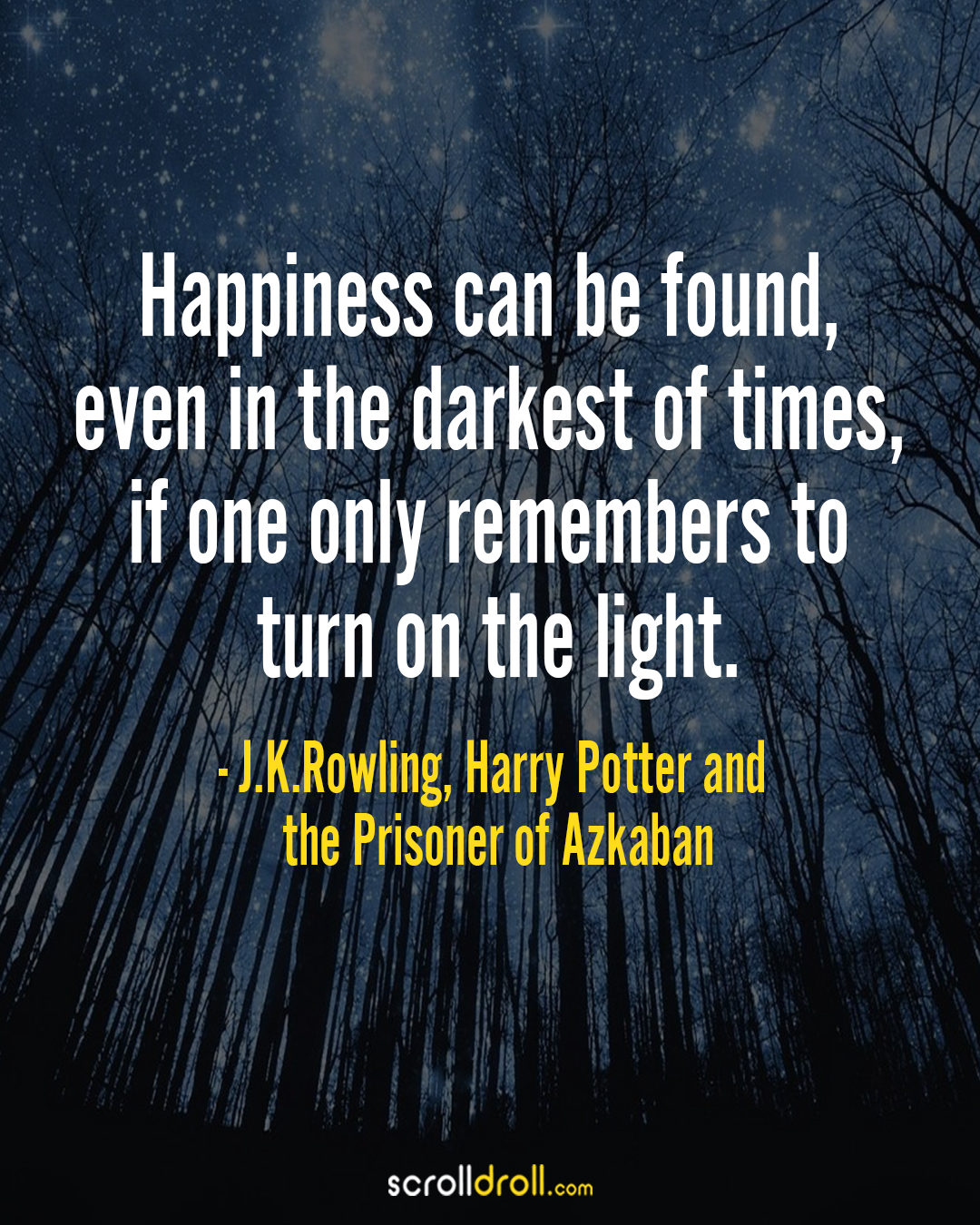 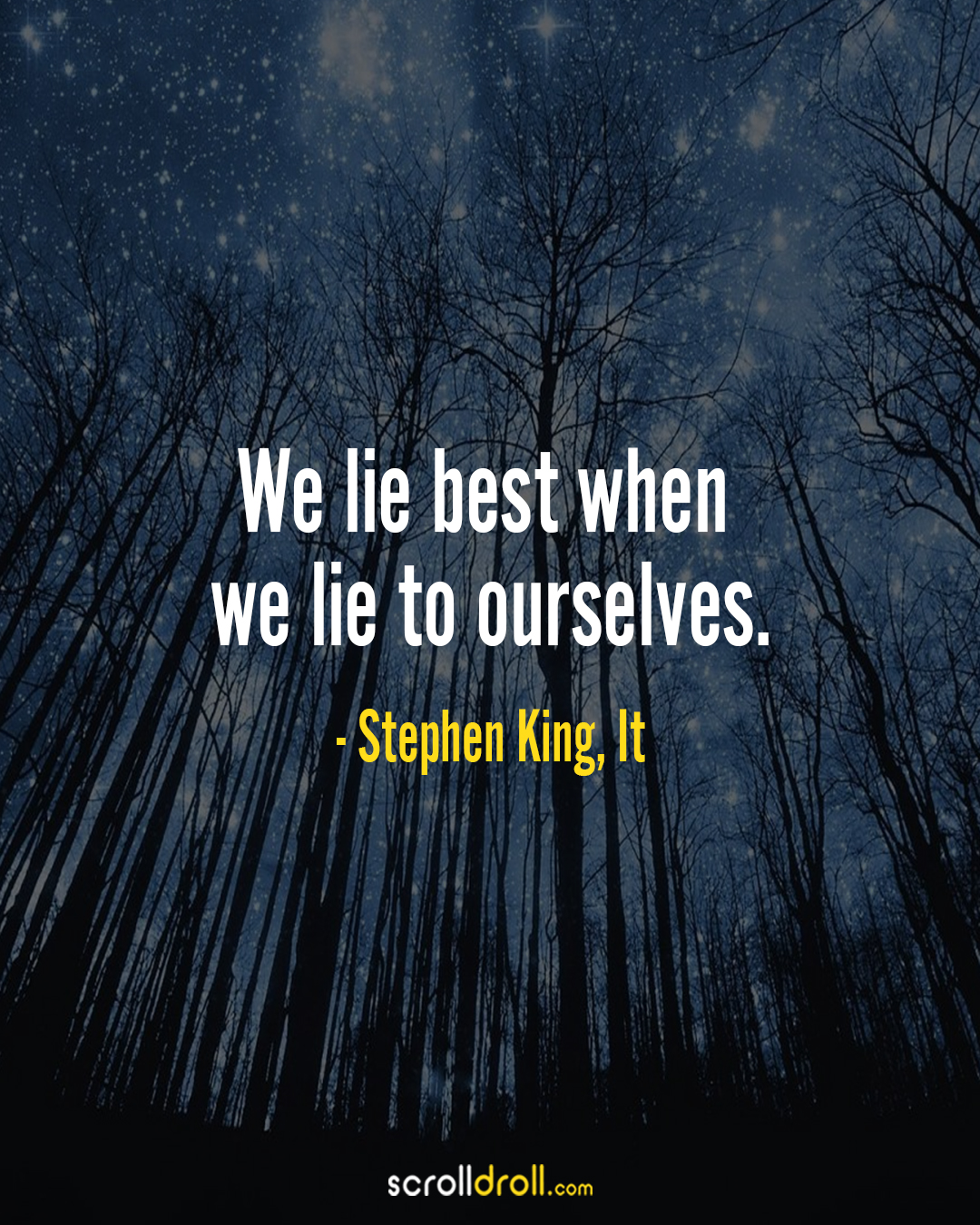 21. “Nothing in the world is ever completely wrong. Even a stopped clock is right twice a day.” – Paulo Coelho, Brida 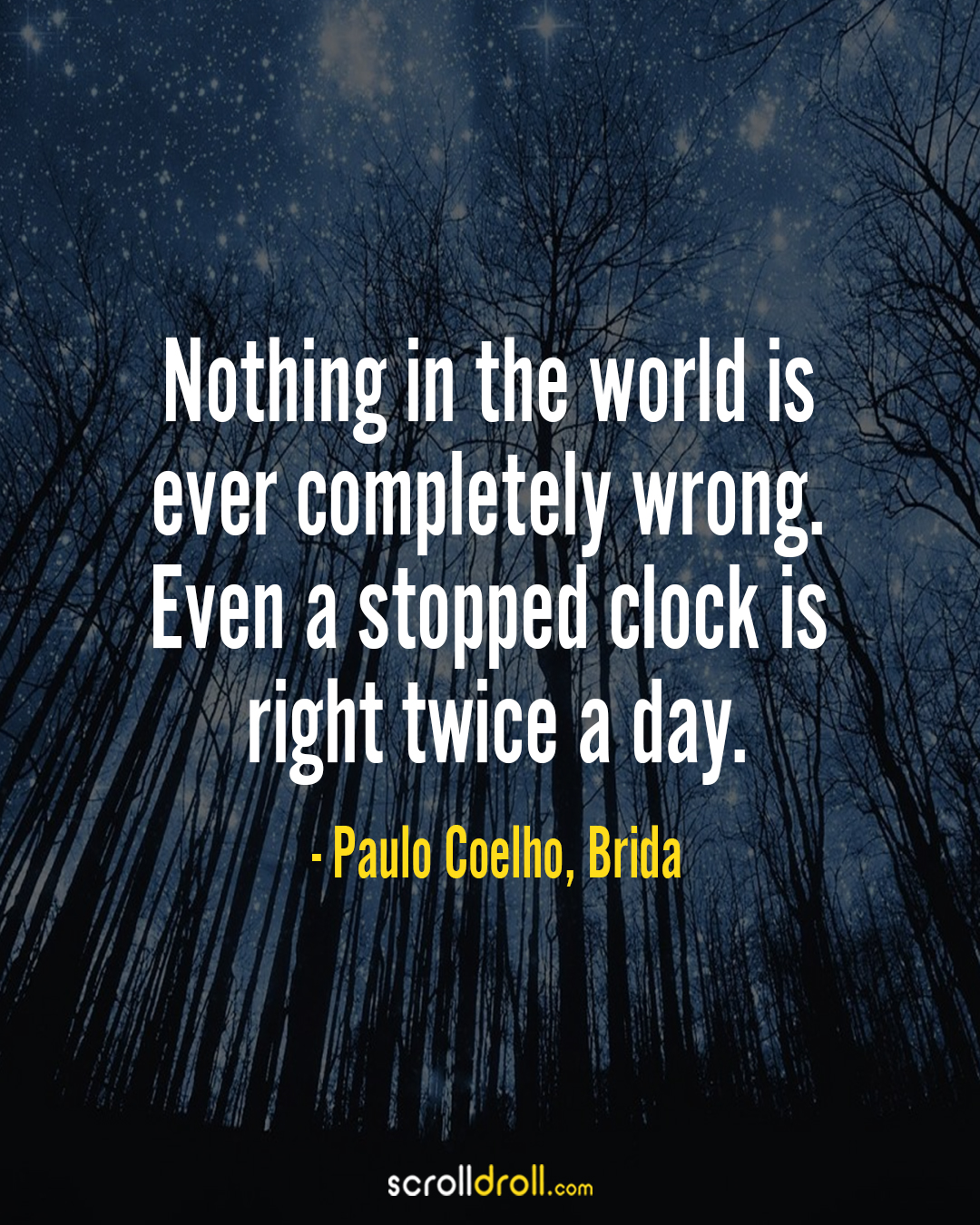 22. “There are two things that men should never weary of, goodness and humility; we get none too much of them in this rough world among cold, proud people.” – Robert Louis Stevenson, Kidnapped 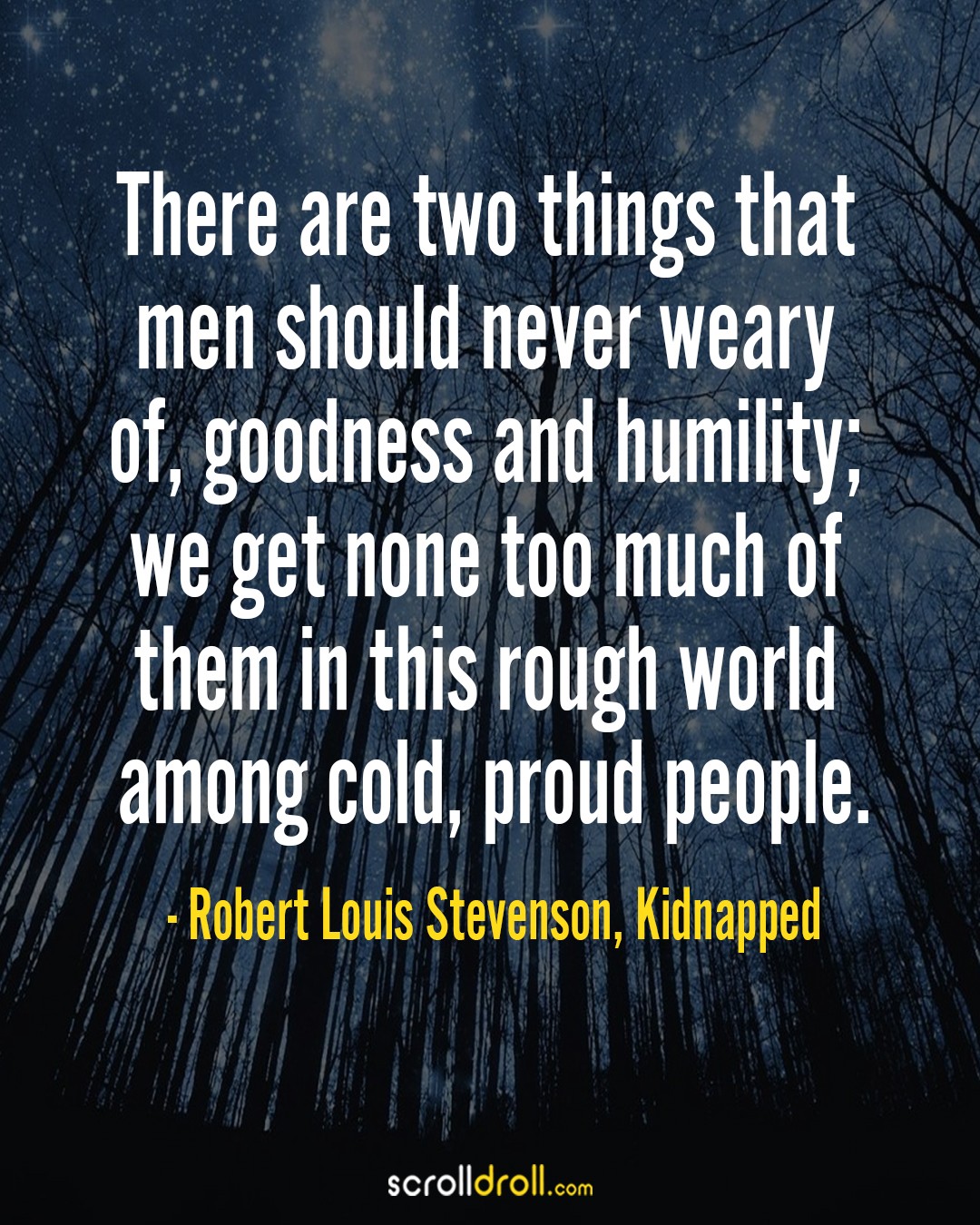 23. “In this world, shipmates, sin that pays its way can travel freely and without a passport; whereas Virtue, if a pauper, is stopped at all frontiers.” – Herman Melville, Moby-Dick or, the Whale 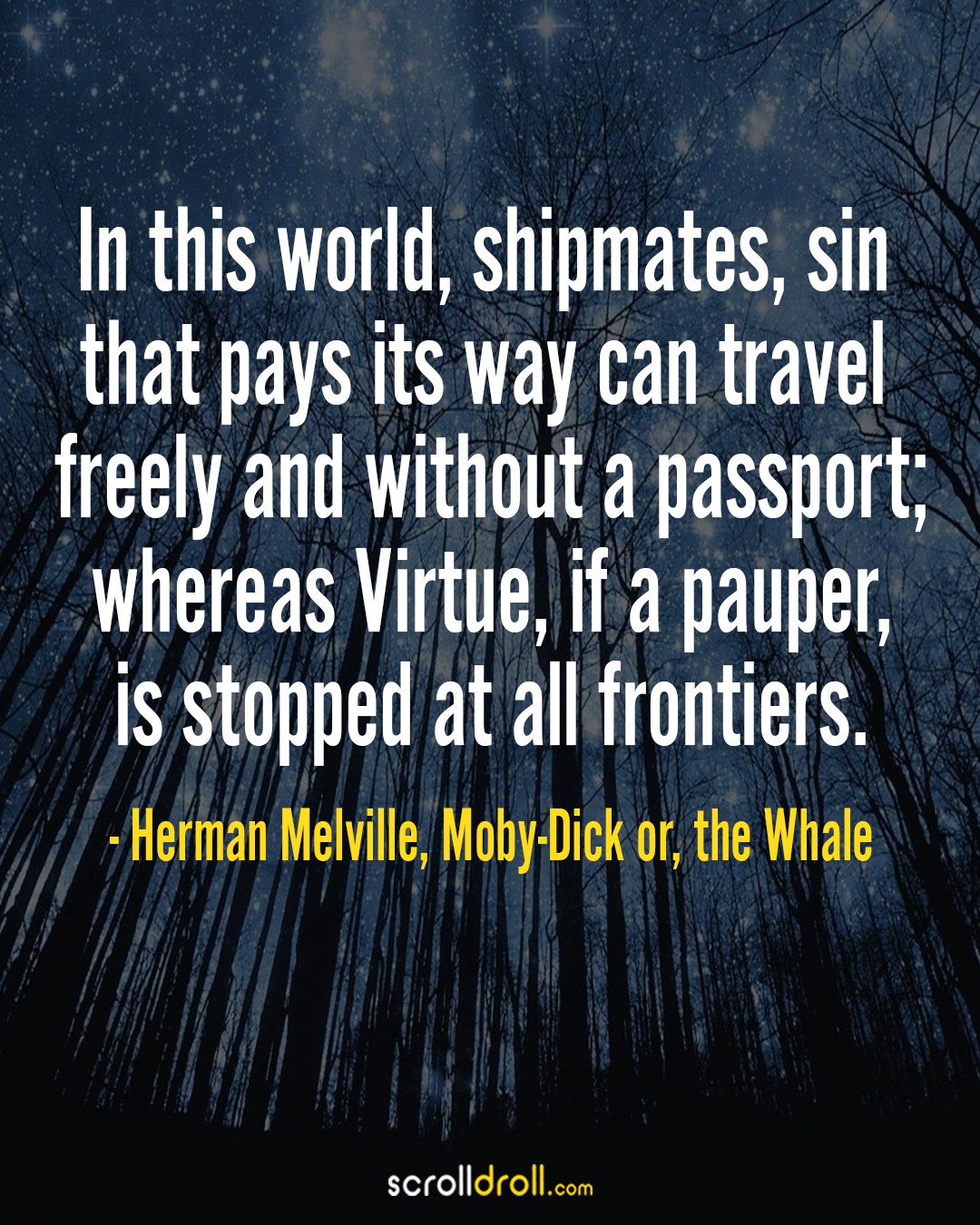 24. “No, that is the great fallacy: the wisdom of old men. They do not grow wise. They grow careful.” – Ernest Hemingway, A Farewell to Arms 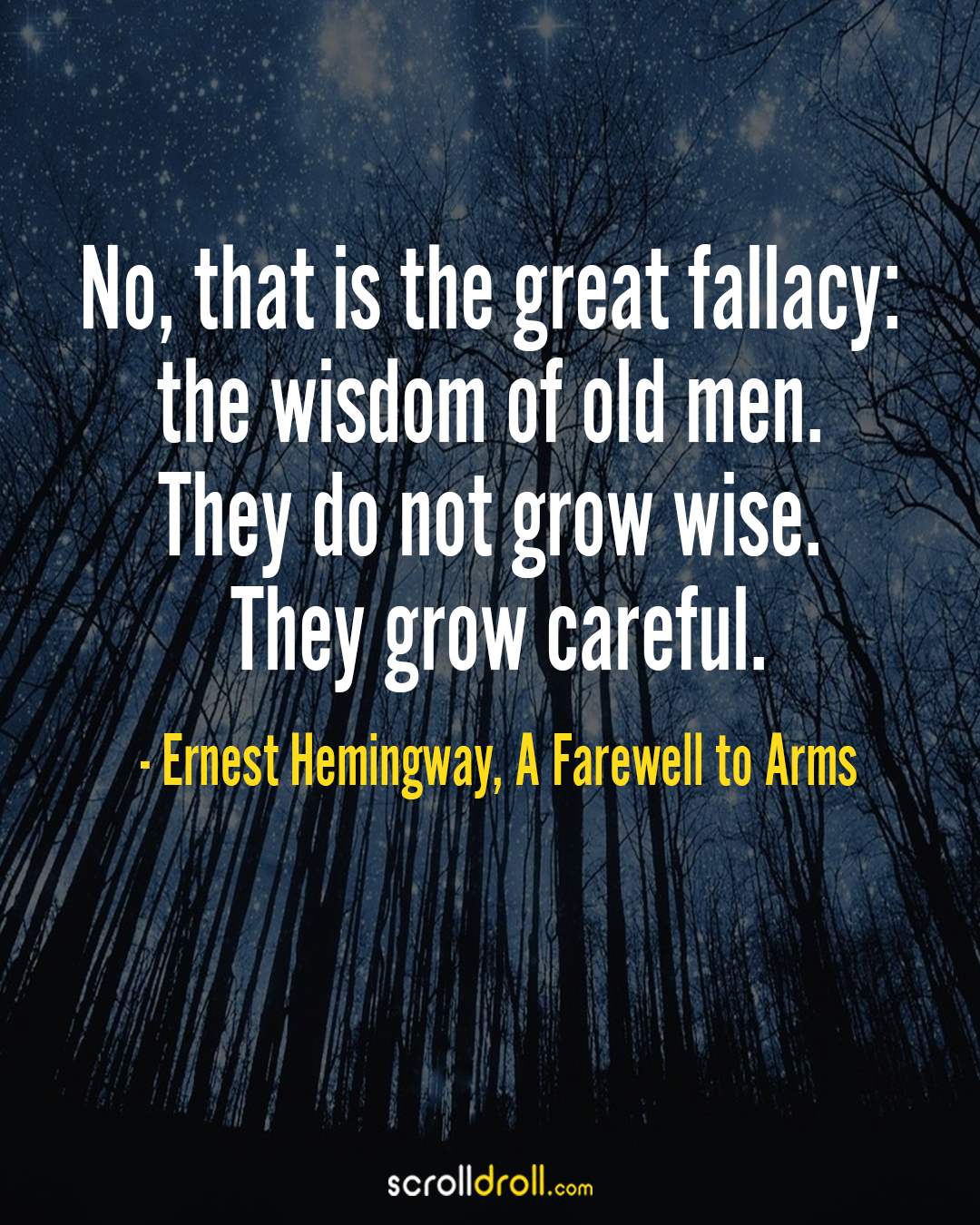 25. “You’re braver than you believe, stronger than you seem, and smarter than you think.” – A. A. Milne, Winnie the Pooh 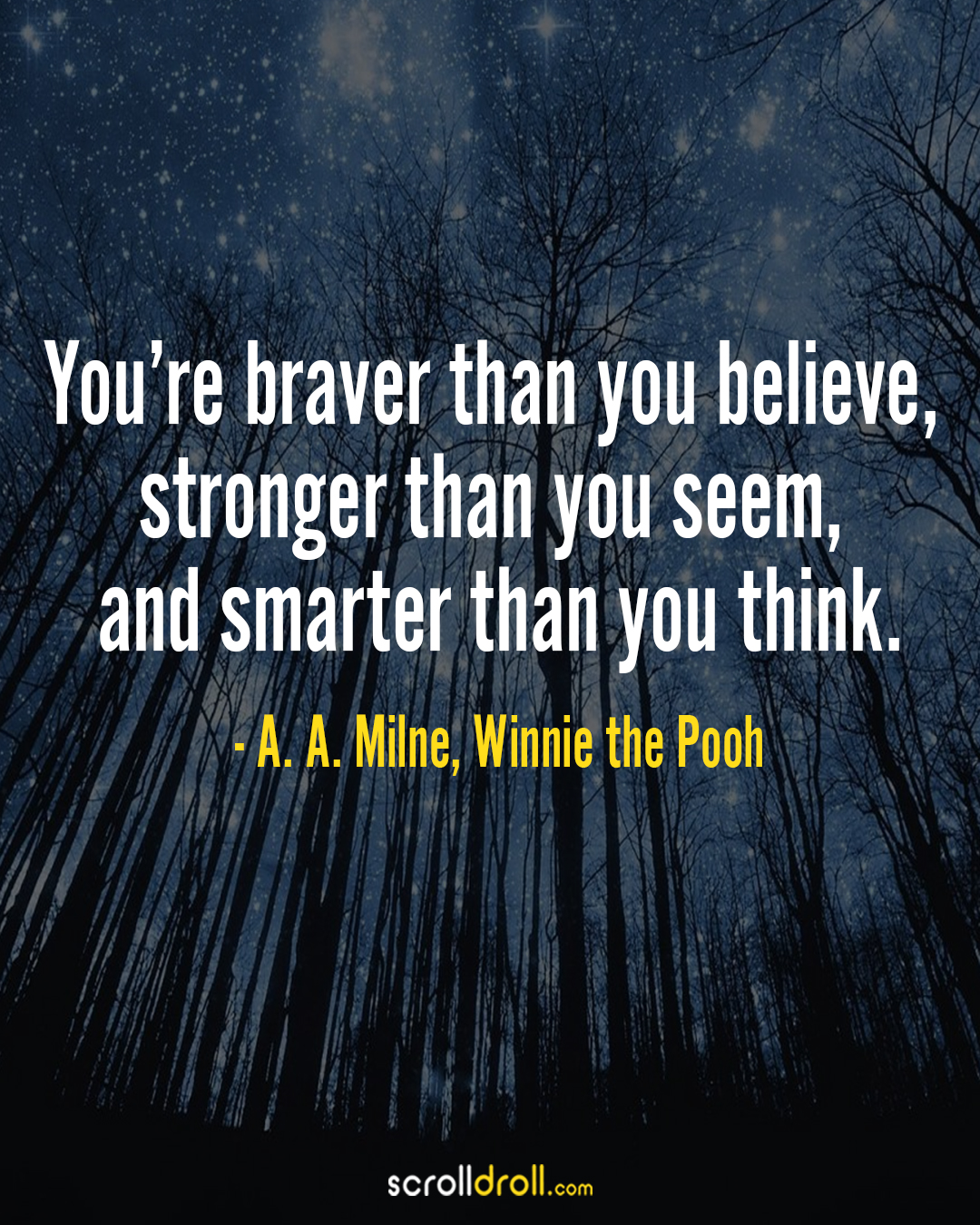 And with this so-pure-and-innocent-a-quote-that-it-will-make-you-happy-cry, we have come to the end of this list of some of the best quotes from books. What are some of your favourite quotes from books that you adore? Let me know in the comments section.