The film industry has given us a lot of goals to strive for. From undying love to relationship goals to body goals and what not, Bollywood has always had a special corner for friendship goals. From Jai and Veeru to Munna and Circuit there are several sets of on-screen friends who we have come to love; idolising the friendship between them. This Friendship Day we bring to you a list of the 10 Times Bollywood Gave Us Friendship Day Goals. 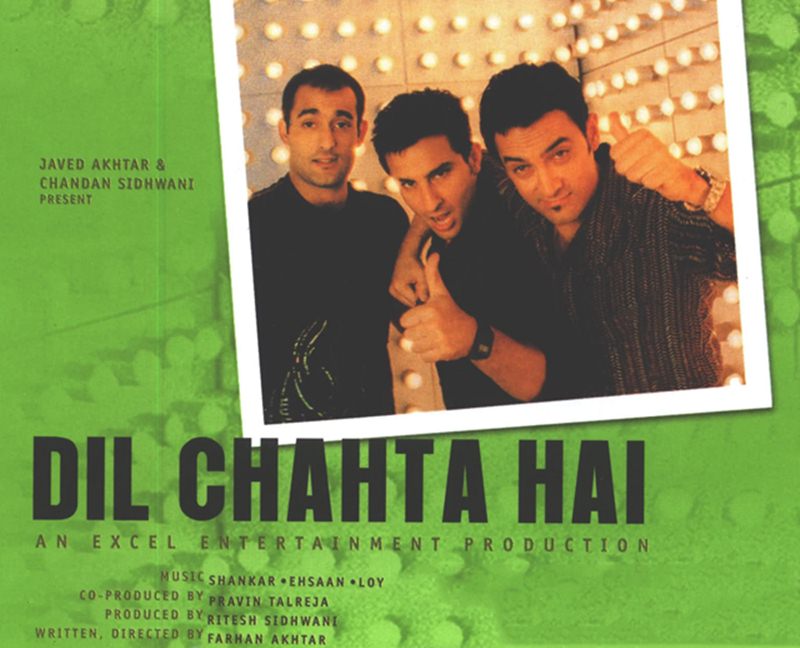 A generation-defining, trend-setting masterpiece from the early 2000s.

Farhan Akhtar’s magnum opus Dil Chahata Hai started a new trend in Bollywood. This new trend focused on portraying on screen the lighter aspects of life, with an underlying layer of human relations and psychology. Dil Chahta Hai is a story about three college best-friends who set out on different paths in life due their ambitions and actions. The protagonists Amir Khan (Akash), Saif Ali Khan (Sameer), and Akshay Khanna (Siddharth) kickstart the movie with a road-trip to Goa before they set out on their future paths. The story is deeply moving, it shows the relationship and bond between Akasha, Sid and Sam, and how they drift apart as time progresses. The movie is fun and engaging, and it is also very moving. It is a must watch with friends kind of film. 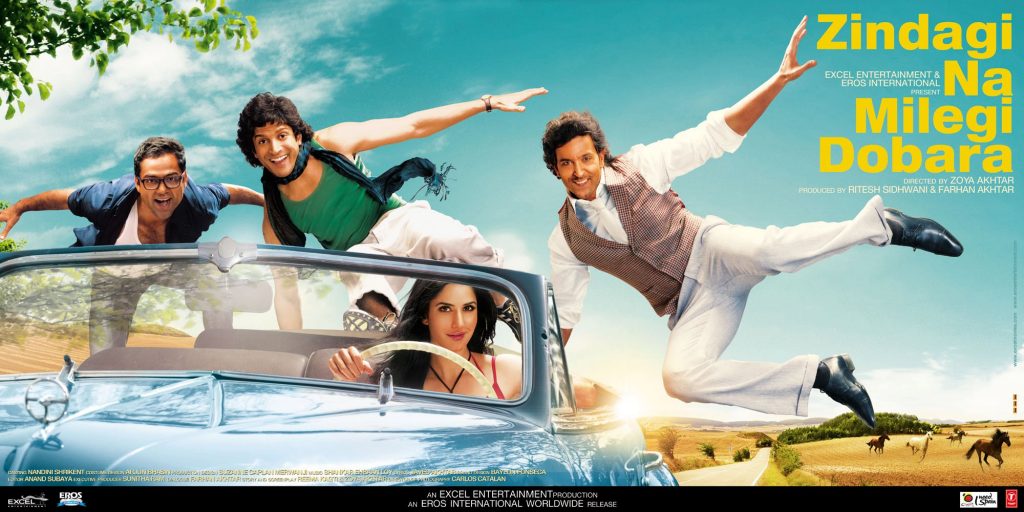 Farhan Ahktar does it again with, ZNMD; what he did with Dil Chahata Hai.

Another Farhan Akhtar flick which portrays a trio of childhood friends who have planned a bachelor road-trip around Spain. With Hrithik Roshan, Abhay Deol, and Farhan Akhtar in the lead, as Arjun, Kabir and Imran respectively, ZNMD is another masterpiece on the bonds of friendship and love between friends. The story is a roller coaster of emotions and breathtaking scenes of a road trip around Spain. It may not be as brilliant as its predecessor Dil Chahata Hai, but its message is equally powerful, yet very different too. The relationships and themes that ZNMD deals with are a tad bit deeper and more complex than the ones in Dil Chahata Hai. It is a great watch and is perfect for a lazy Sunday afternoon binge. 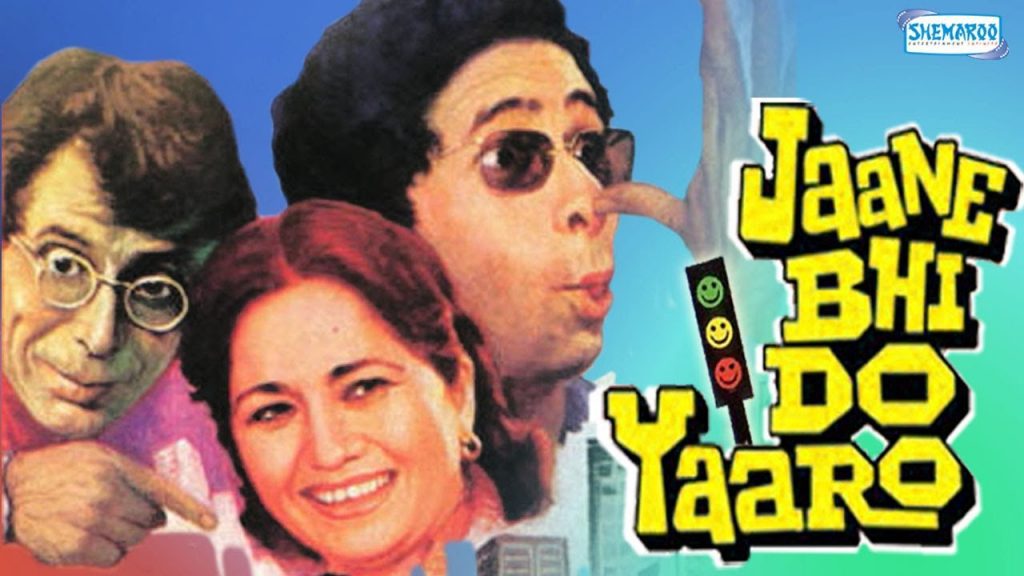 India’s first cult classic that barely completed a week at the theatres.

Before his big break in the mainstream with movies like Maasom and Karma Naseeruddin Shah starred in the small budget comedy – Jaaney Bhi Doh Yaaron. Set in the 80’s the film is a dark satire on Indian politics, bureaucracy, news media and business. Though it was a box office disaster upon its initial release; over the years Jaane Bhi Doh Yaaro has garnered a massive fan base and it has become a cult classic. The story of two friends who open up a photo studio at the Haji Ali area in Mumbai, meet a newspaper reporter who hires them to uncover the deep-rooted corruption in the political and bureaucratic systems of the Indian society.T he relationship and bond between the two protagonists Vinod (Naseeruddin) and Sudhir (Ravi Baswani) are literally friendship goals. The film also highlights how news and media can be manipulated to the benefit of the rich and powerful. The movie has a dash of brilliance and a tone that resonates with younger viewers and is one of the best comedies that you can enjoy watching with your friends. 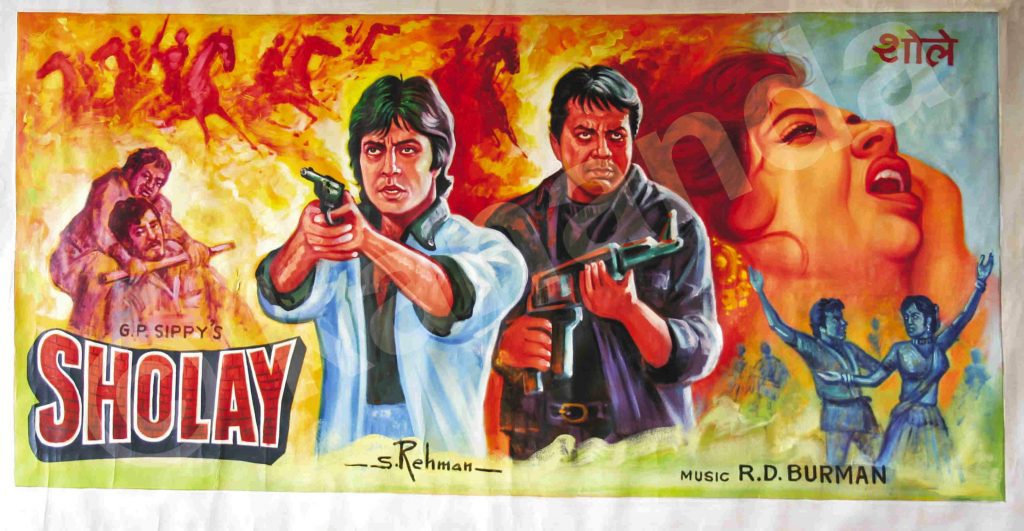 It was with Sholay, that Indian cinema was reborn.

Bollywood’s era-defining film and the turning point in film-making, GP Sippy’s Sholay is still loved and watched by people from all walks of life and age groups. The iconic song sequence with Dharmendra (Veeru) and Amitabh Bachchan (Jai) on their bullet with a side car sining “Yeh dosti hum nahi todengye” still reminds us of our best friends. The friendship and camaraderie between Jai and Veeru have become an icon in itself and has often been emulated or adapted in different Bollywood and regional films over the years. With an engaging plot and intense melodrama, Sholay has become one of the most watched films, that’s given us some crazy friendship goals inspired by Jai and Veeru. 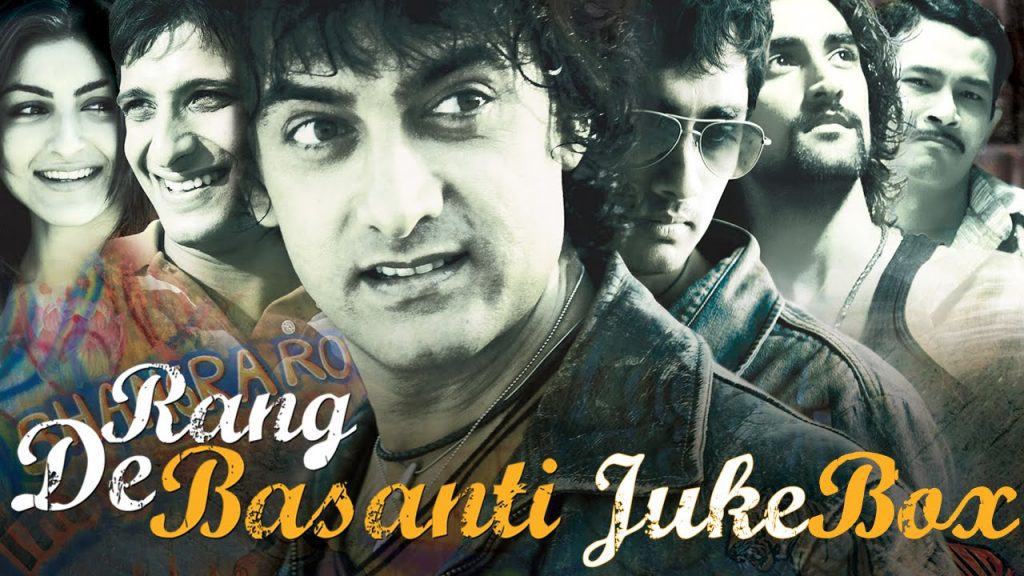 With a stellar ensemble-cast and parallel narratives, RDB delivers a very inspiring story.

Rang De Basanti tells the story of a tight group of friends and is a brave attempt to highlight the political scenario of India. With Amir Khan in the lead along with Shraman Joshi, Kunal Kapoor, Soha Ali Khan, R Madhawan, Siddhart Narayan and Atul Kulkarni, the film shows how important friends are and what it means to lose a friend. It highlights the corrupt practices of the defence ministry, which results in Madhavan’s character dying in a crash while flying a MIG-21. The parallels drawn between the freedom fighters that the characters play for Sue’s (Alice Patten) docu-drama in the movie are stark and vivid. The group lead a fight against the system, like the pre-independence Indian freedom fighters and end up getting crushed. But, its message about the importance of having friends who can die for you is clearly a theme that Rang De Basanti depicts flawlessly. 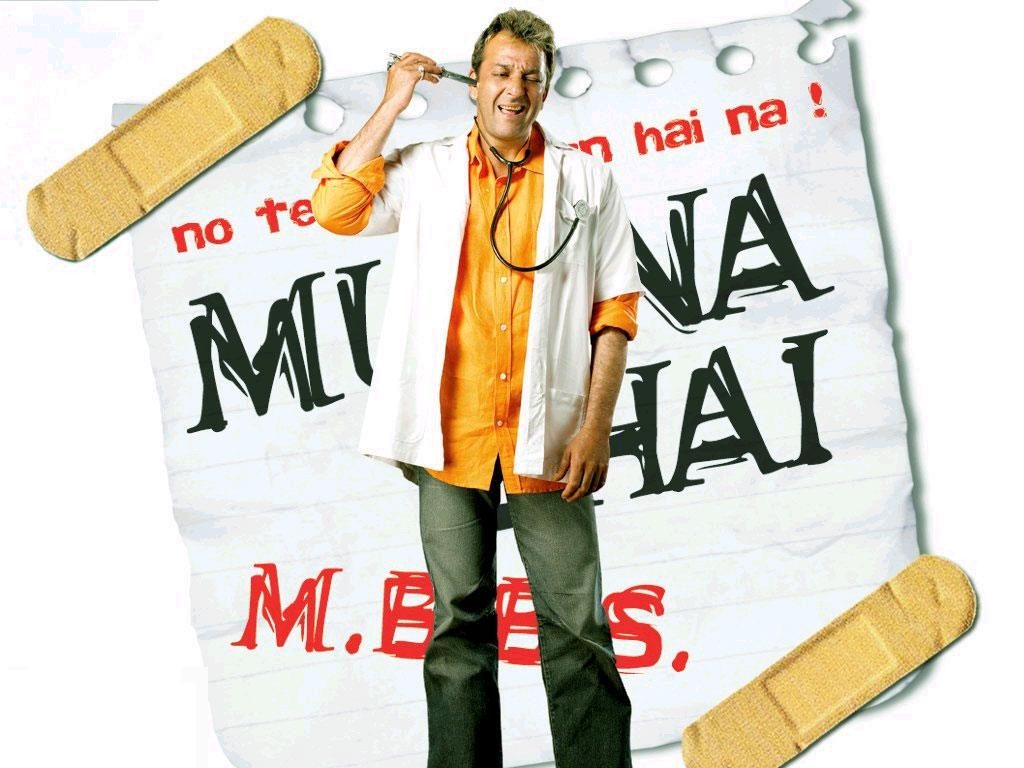 Munna Bhai gave Sanuj Baba not only a fresh start but also a new identity.

The film which changed Sanjay Dutt’s on-screen image, Munna Bhai MBBS is one of the best comedies that Bollywood has produced. The comic-timing throughout the movie is impeccable and its a hilarious comedy of errors. Munna and Circuit are incomplete without each other, and their on-screen friendship actually redefined what the words friendship and brotherhood mean. If you and your best friends are as wild as Munna and Circuit then you will know what it means to have a friend whose insanity matches yours. Munna and Circuit have become almost as iconic as Jai and Veeru, ever since the theatrical release of Munna Bhai MBBS. The sequel, Lagey Raho Munna Bhai is also a great watch. 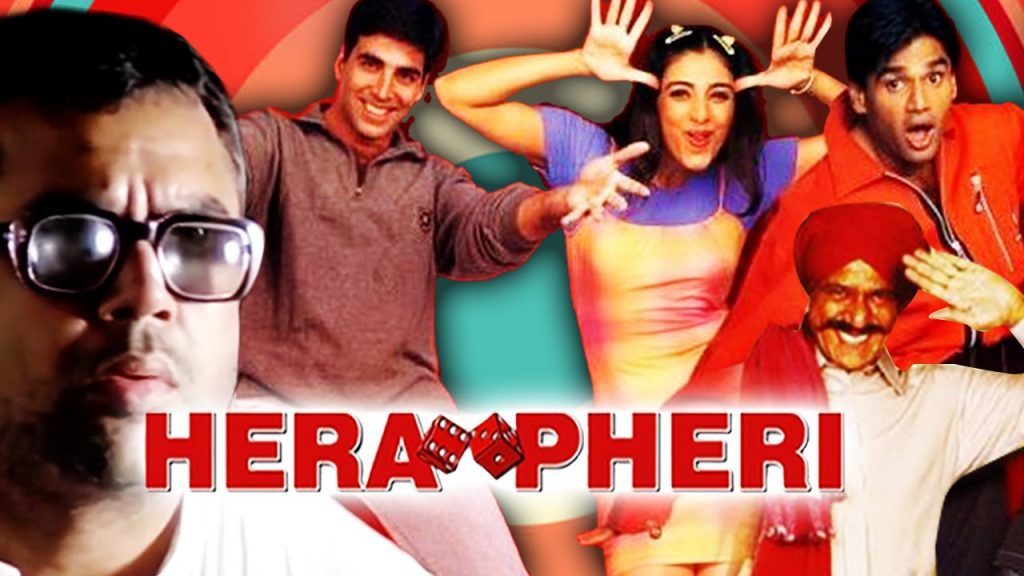 Baburao’s red telephone should have been mentioned under the cast!

By far, the most hilarious film in this list, Hera Pheri gave us Baburao Ganpat Rao Apte’s impeccable humour, and the hilarious rivalry between ‘the-perpetually-broke Raju’ and ‘the-drowned-in-debt-Shyam/Ghanshyam.’ The confusion that drives the plot forward is sparked by a misprint in the telephone directory which lists Baburao’s Star Garage’s phone number as Star Fisheries and vice-versa. This misprint sparks the fiasco which leads Baburao to repeat his famous lines, “Utha le re deva, utha le. Merko nai re inn done ko utah le” . The sequel to Hera Pheri failed to capture the essence of its predecessor but it does have the trio of Baburao Raju and Shyam making the stupidest decisions in life. You can literally laugh at every dialogue in the film and it is a movie that deserves to be binged upon with friends. 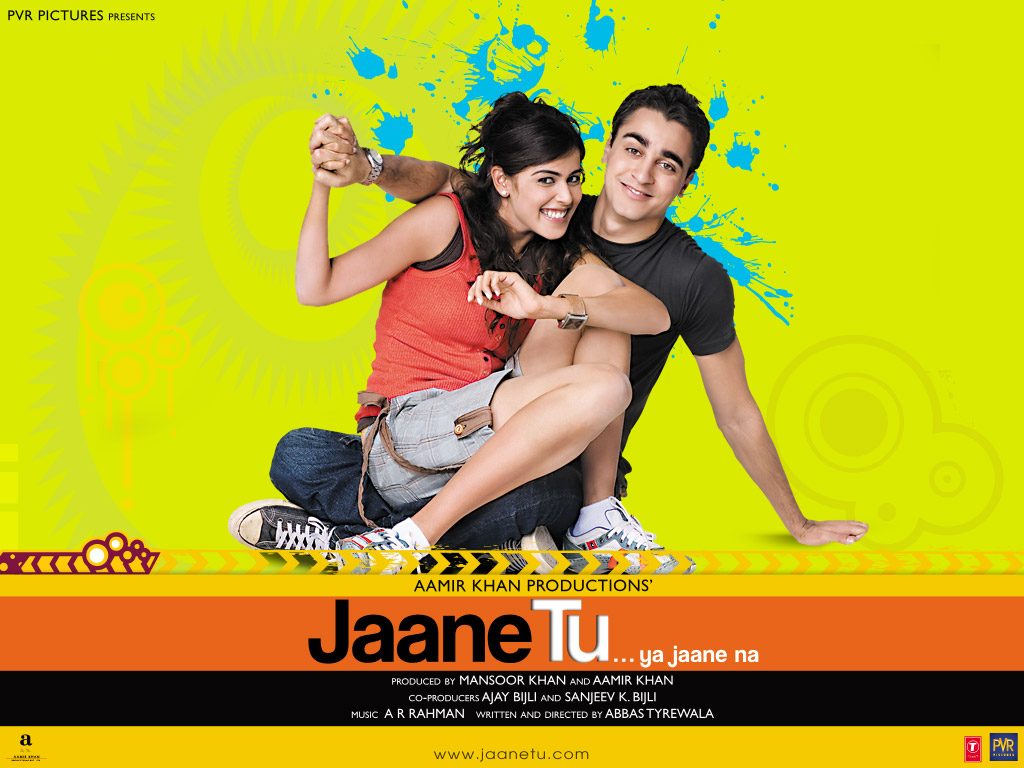 Imran Khan’s Bollywood debut alongside Genelia D’souza, Janet Tu Ya Janey Na is the story between two best friends, Aditi (Genelia) and Jai (Imran). Since their childhood, they have a love-hate relationship and are literally inseparable. Jai falls for a certain girl which devastates Aditi but she tries to mask it and starts seeing men for marriage. As the movie progresses it is revealed that Jai too is subconsciously in love with Aditi, and the film ends with a smile on your face. You cannot afford to miss watching this with your friends, who knows, you might also find your Jai or your Aditi in one of your friends. 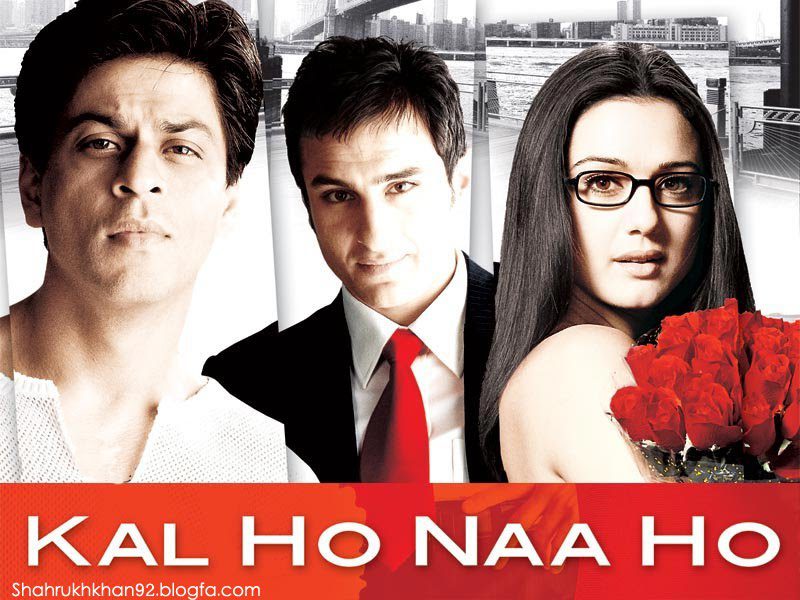 The heart-wrenching story of, an ever cheerful and loveable Aman, (Shahrukh Khan) the sweet and pretty Naina (Preity Zinta) and the obnoxious Rohit (Said Ali Khan) Kal Ho Na Ho moved millions of us to tears. Aman is a dying man and Naina falls for him, but Rohit is actually in love with Naina, so Aman decides to bring the two friends together as his final act before his death. The love, camaraderie and friendship as seen between Aman, Naina and Rohit are quite rare in Bollywood films, and it has given us some serious friendship goals. Would you not want to get sloshed in a club like the leading-trio in “Its the time to disco”? Would you not want to set up your best friend with the woman/man of his/her dreams? Would you not want a story as interesting as Kal Ho Na Ho (minus the dying part)? This generation-defining film will crush your ribs with laughter and also move you to tears. It is a must watch, especially with your best friends. 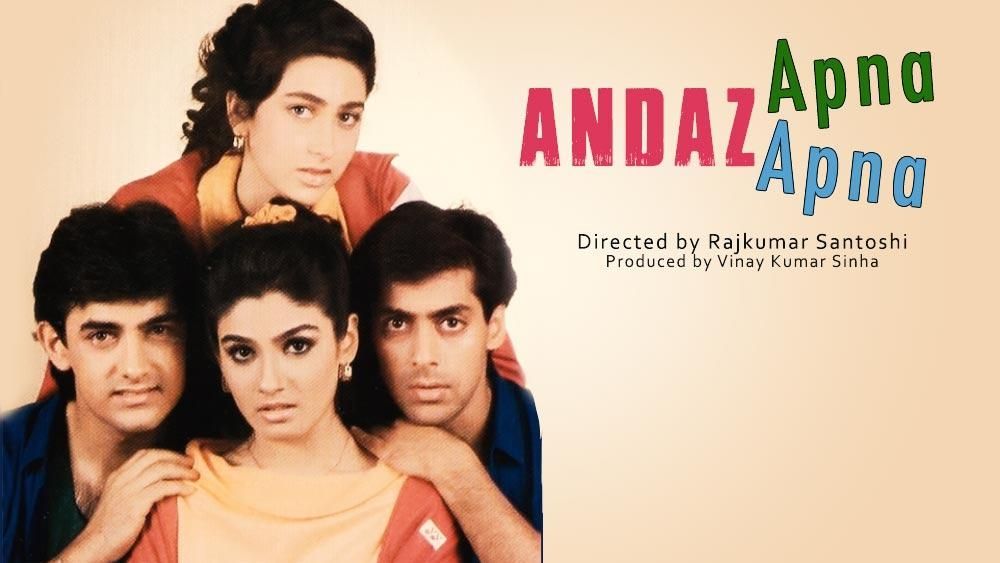 I’m still not sure who’s Karishma and who’s Raveen, and which one is Teja?

The cult classic, Andaz Apna Apna was a complete box office disaster. It failed to resonate with the viewers and was taken down from the theatres almost as soon as it was released. Amar (Amir Khan) and Prem (Salman Khan) try to woo Karishma (Raveena Tandon) and Raveena (Karisma Kapoor) who switch their names to find a groom who’d love Raveena for who she is, and not for her father’s (Ram Gopal Bajaj) wealth. Later in the movie, it is revealed that Ram Gopal (Paresh Rawal) has a twin who is a gangster named Shyam Gopal Bajaj aka Teja. Shakti Kapoor plays the iconic character of Crime Master Gogo, and the film is driven by Gogo’s motive to kidnap Ram Gopal’s daughter. The love-hate relationship between Amar and Prem is one of the greatest friendship goals that Bollywood has given us. Anza Apna Apna is the kind of film that you can never get bored with, especially if you are watching with your closest friends.

There are countless, inspiring, and enviable on-screen friends and the ones mentioned in the list makes up only a fraction of the friendship goal that Bollywood has given us. Let us know what you think of this list and let’s discuss some of your favourite movies and characters about friendship in the comments below.

21 Best Engineering Memes & Jokes That Will Have You In Splits