12 Best Dialogues From Cast Away That’ll Thoroughly Inspire You

Loosely based on the famous Defoe novel, Robinson Crusoe, Cast Away is one of the most popular and inspiring movies of the century. The story of a FedX employee stranded on a faraway island and his desperate attempts to survive the odds is still fresh in our minds. The brilliance of Tom Hanks is unmatched and he gives one of the best performances of his career in this film. Out of all the things that are good and true about this movie, the one thing that stands out is the powerful script and lines. Be it the lines about time or the ones about life, they are simply excellent. The dialogues in this movie are thoroughly inspiring and leave a lasting impact on the viewer. Let’s have a look at some of the best dialogues from Cast Away that will make you relive this brilliant survival drama film.

Also read: 15 Quotes & Dialogues from Forrest Gump That Will Leave You with A Smile

1. “I know what I have to do now. I got to keep breathing, because tomorrow the sun will rise. Who knows what the tide could bring?” -Chuck Noland 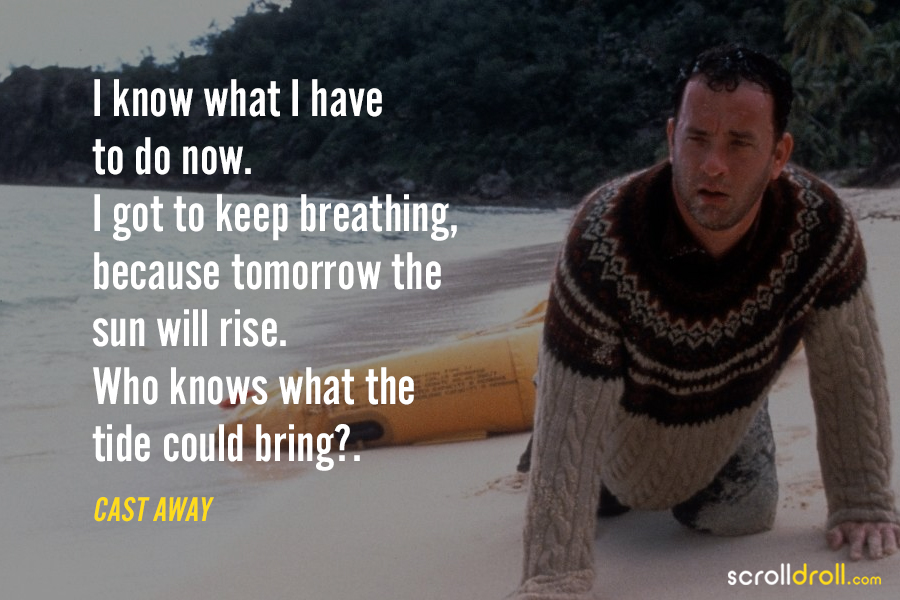 2. “We live and we die by time, and we must not commit the sin of turning our back on time.” -Chuck Noland 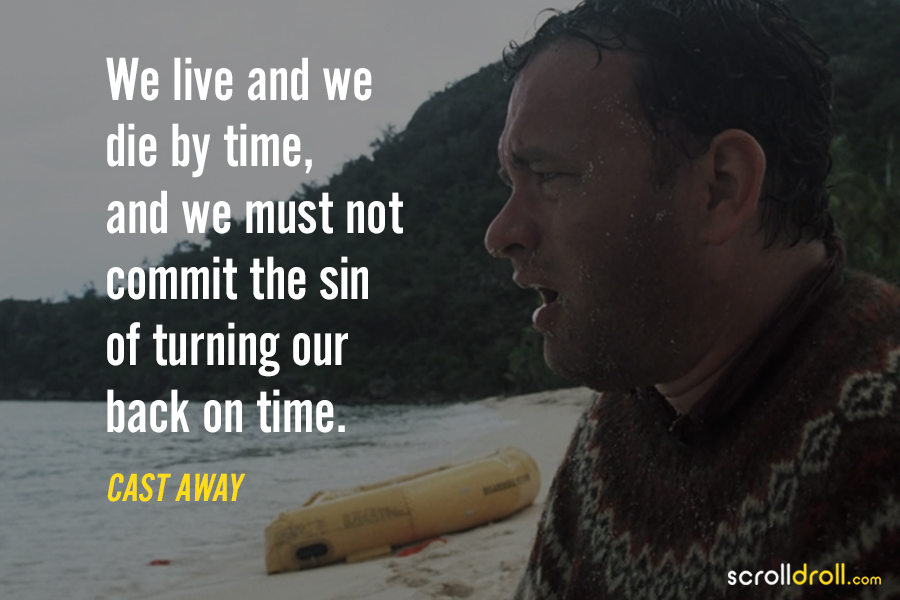 3.  “We might just make it. Did that thought ever cross your brain? Well, regardless, I would rather take my chance out there on the ocean than to stay here and die on this shithole island, spending the rest of my life talking TO A GODDAMN VOLLEYBALL” -Chuck Noland 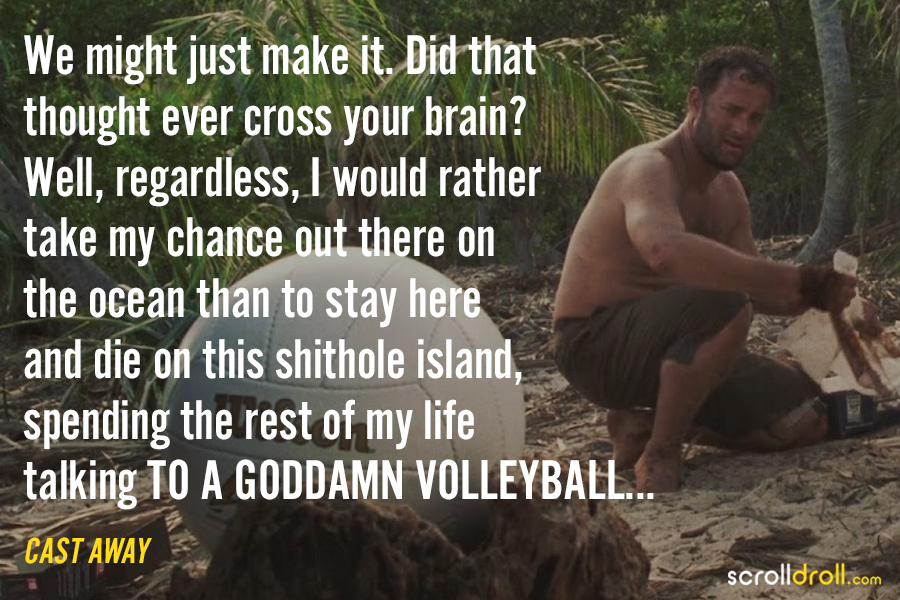 4. “I couldn’t even kill myself the way I wanted to. I had power over nothing. And that’s when this feeling came over me like a warm blanket. I knew, somehow, that I had to stay alive.” -Chuck Noland 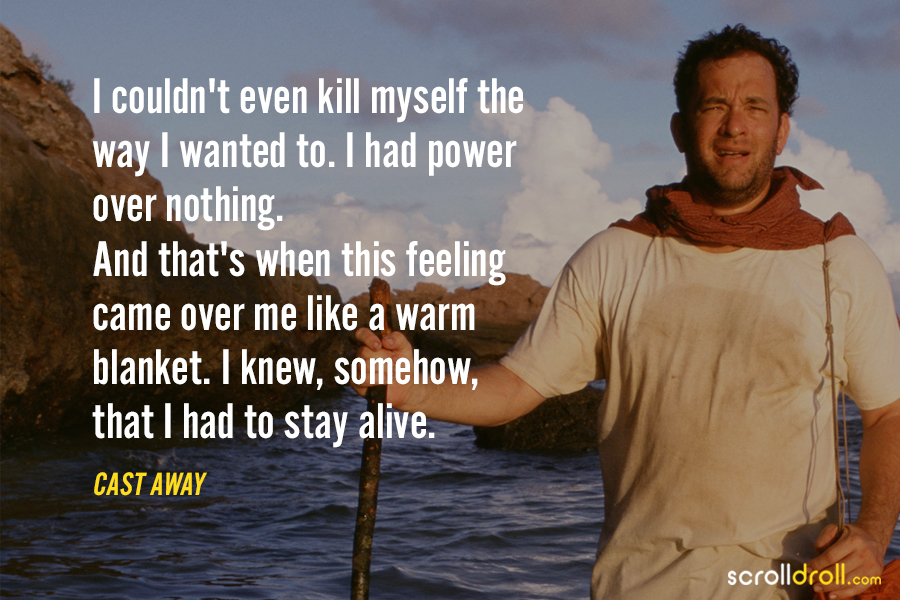 5. “You wouldn’t have a match by any chance would you?” -Chuck Noland 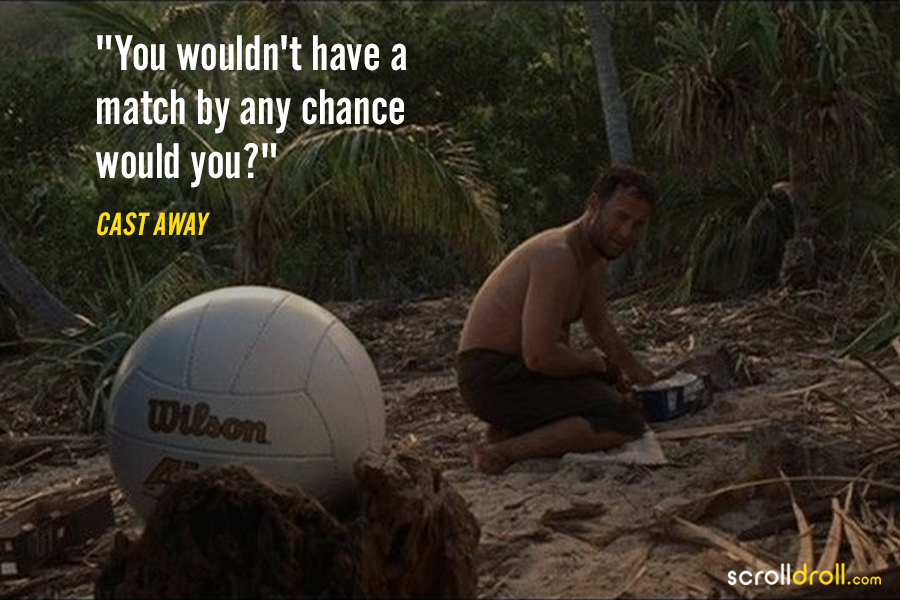 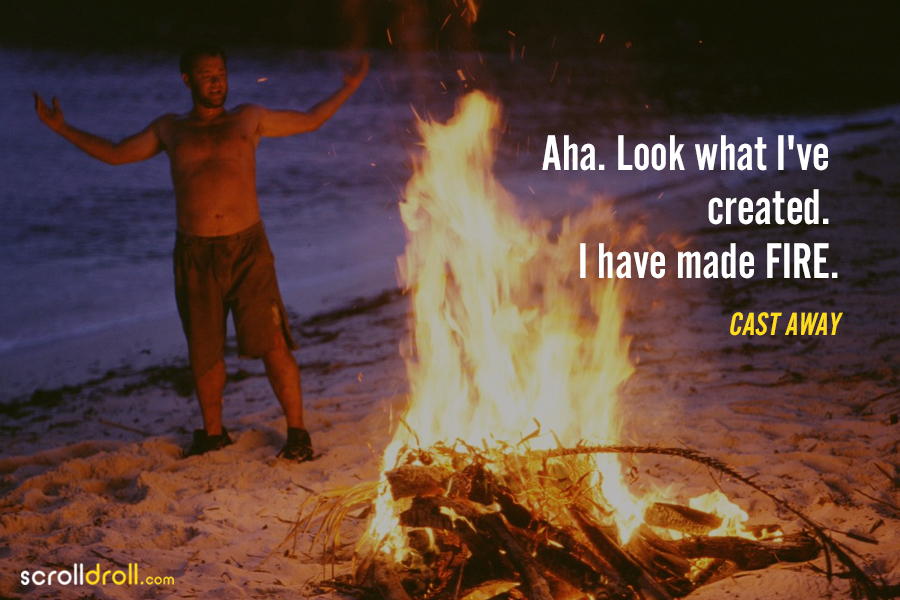 7. Stan- “We buried you. There was a coffin, a gravestone… the whole thing.”
Chuck Noland- “I had a coffin? Well what was in it?” 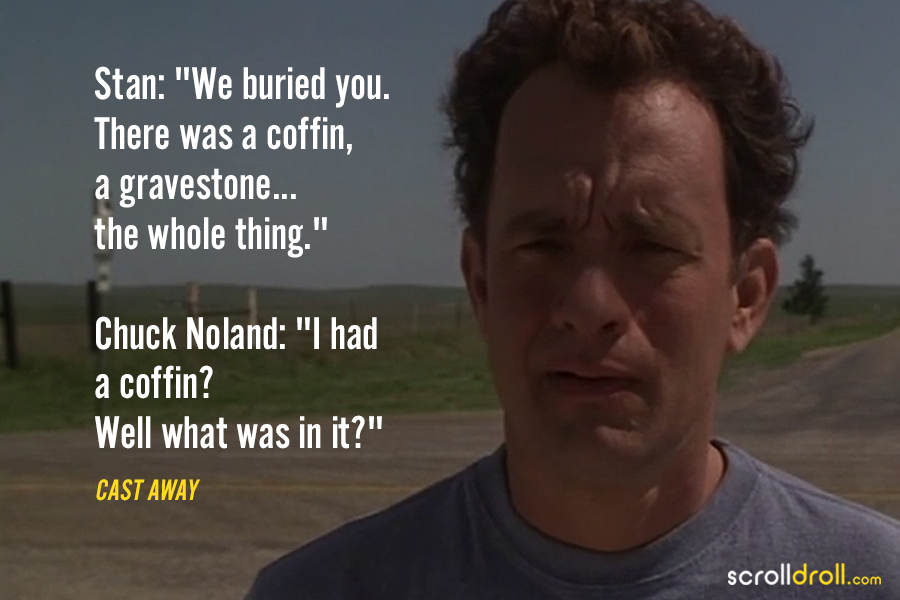 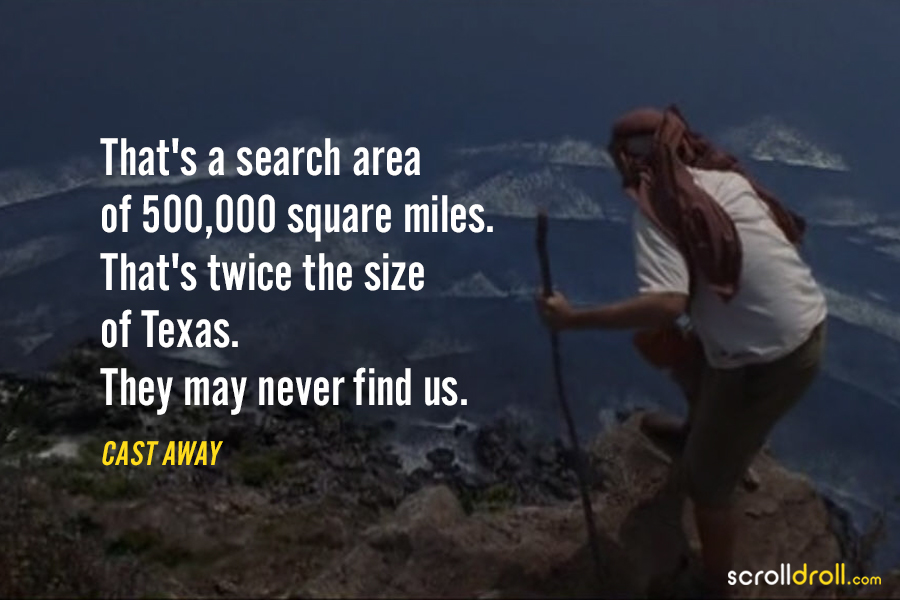 9. “The most beautiful thing in the world is, of course, the world itself.”-Chuck Noland

10. “87 hours is an eternity. The cosmos was created in less time.” -Chuck Noland 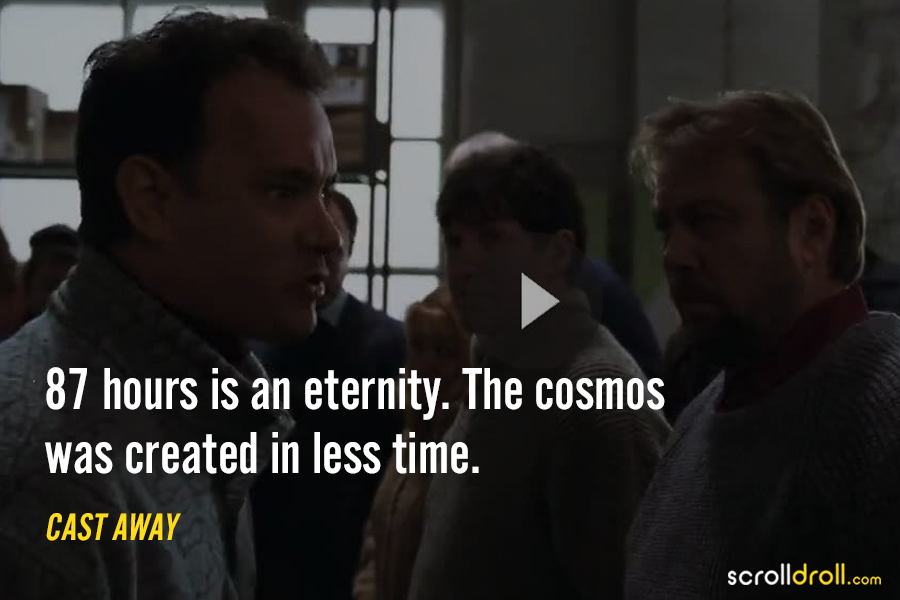 11. “Time rules over us without mercy. Not caring if we’re healthy or ill. Hungry or drunk. Russian, American, beings from Mars. It’s like a fire, it could either destroy us or it could keep us warm.”-Chuck Noland 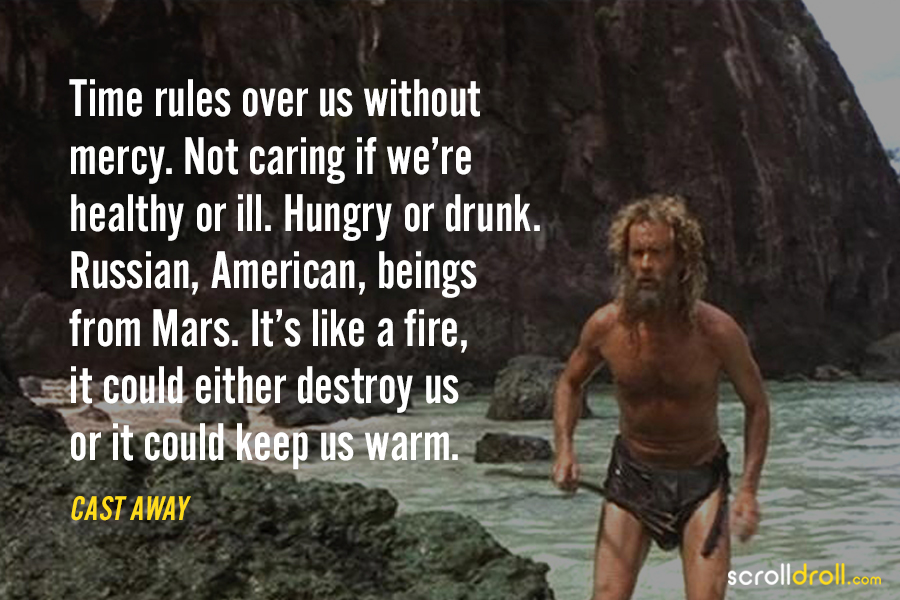 12.”I always knew you were alive, I knew it. Everybody said that I had to let you go. I love you. You’re the love of my life.”-Kelly Frears 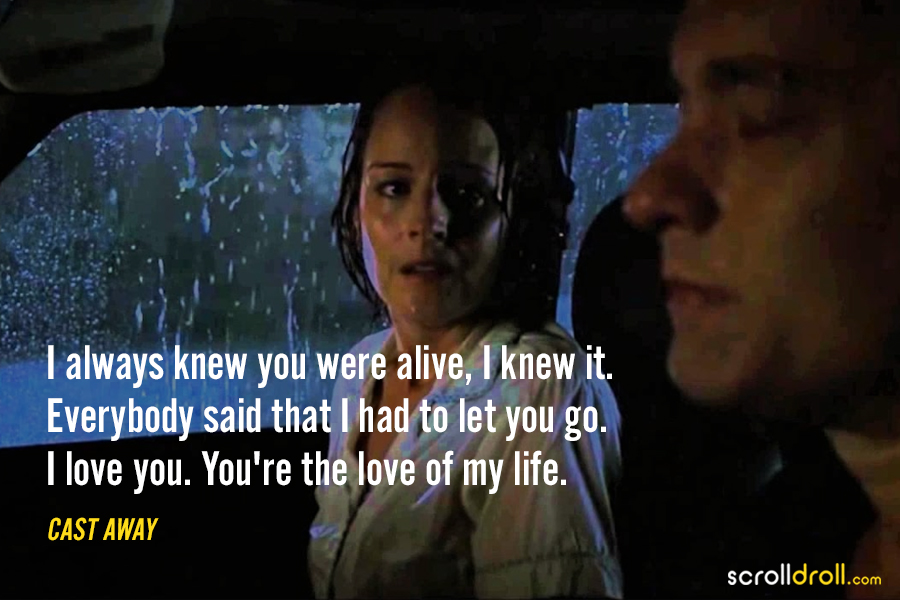 So these were some of the best dialogues from Cast Away. Which one of these lines did you find the most moving? Do let us know in the comments section.