The date 2nd October will instantly ring a bell in people who possess an obsessive enthusiasm for our motherland. And, it is the way it should have been because it’s day when India’s greatest statesman Mohandas Karamchand Gandhi was born. But, what most of us tend to forget (let’s assume we don’t ignore) is the fact that on the exact same date after 35 years of Gandhi’s birth, that is in 1904, a boy named Lal Bahadur, who later grew up to become the second Prime Minister of India, was born in Uttar Pradesh’s Mughalsarai town.

Just like not giving much thought before forgetting the fact that 2nd October also marks the birthday of India’s second and one of the greatest Prime Ministers ever, most of us also remain oblivious to the extraordinary things Lal Bahadur Shastri did to bring a change in our society.

So, here are some of the most interesting facts about  the man we bet you didn’t know

1. He was a believer of equality and considered caste system a social evil that creates divide. Therefore, Lal Bahadur Shastri gave up his family name at an early age. It was only after joining the Kashi Vidyapeeth and after getting a degree in Philosophy, he received the epithet ‘Shastri’ 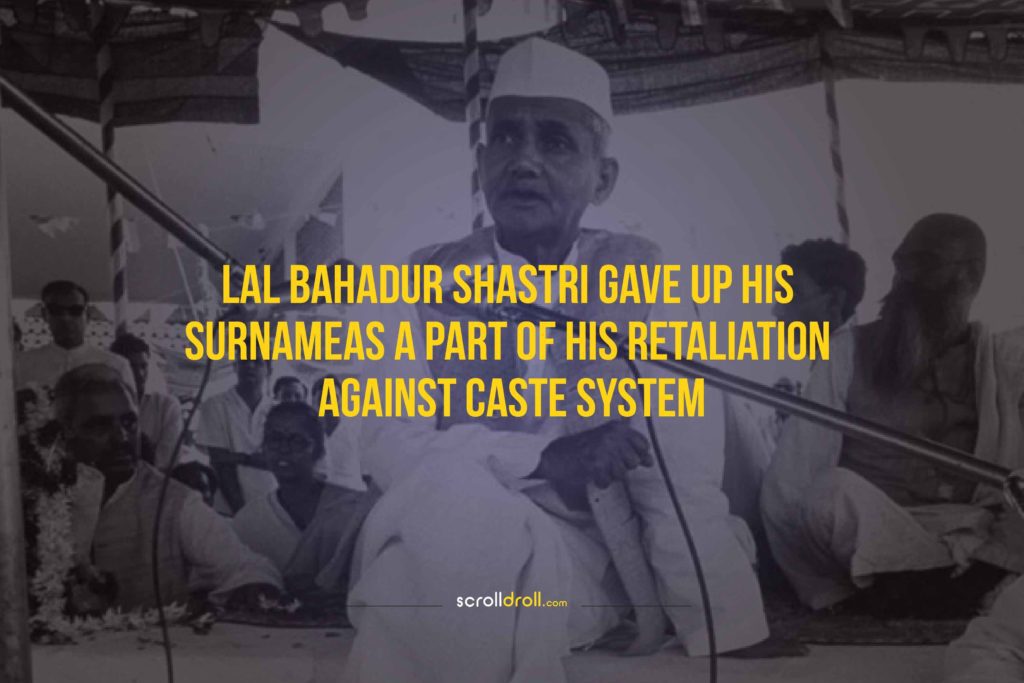 2. Caste system was not the only social evil Lal Bahadur Shastri was fighting against. He also raised his voice against the dowry system and refused to accept anything from his wife’s family at his wedding. It was only after repeated requests from his father-in-law, he took few meters of Khadi cloth as a wedding gift 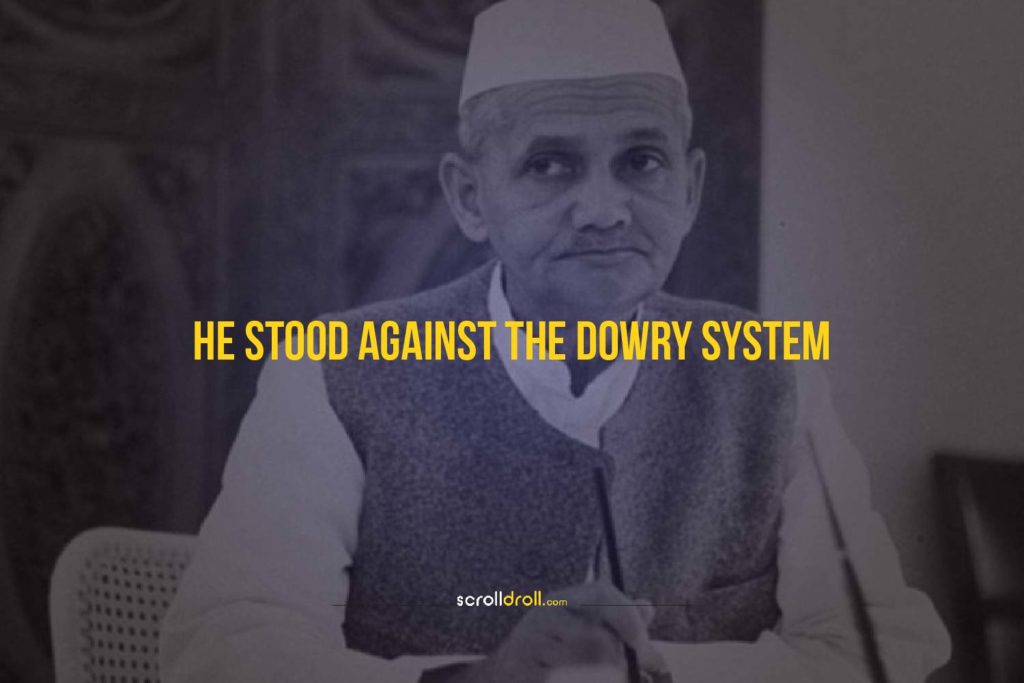 3. Taking inspiration from Mohandas Gandhi and Bal Gangadhar Tilak, Lal Bahadur Shastri gave up his studies to join the freedom movement in 1921 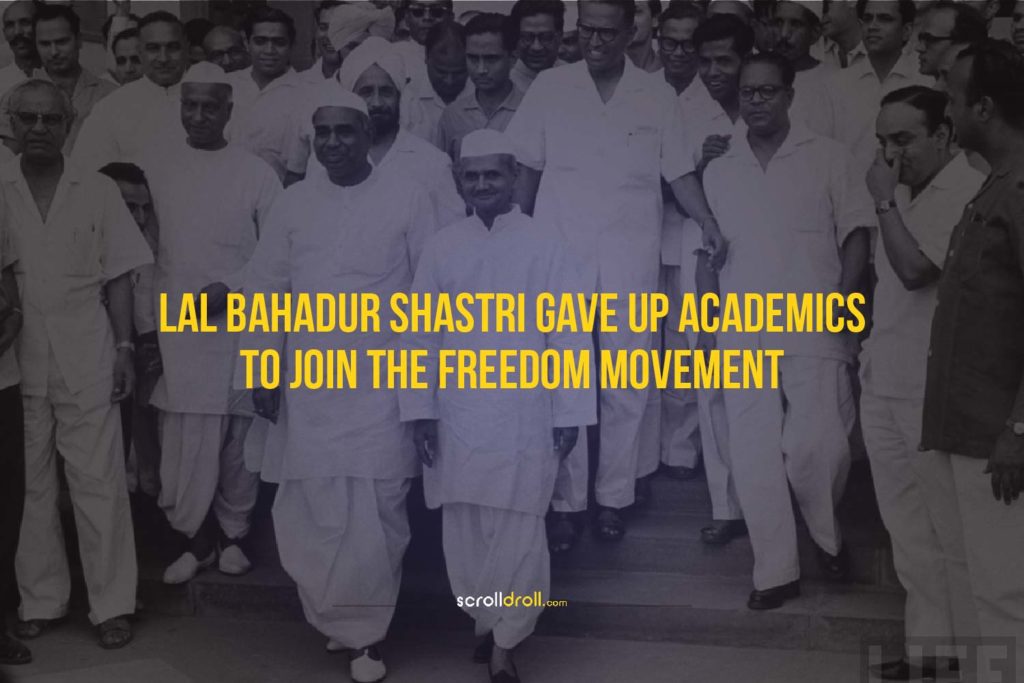 4. Being a part of the freedom movement landed up him in jail quite often which is why he had to be on parole of 15 days when his daughter fell sick. He was there with her when she succumbed to the disease. But, without waiting any longer and even after having some parole time at hand, he went back to jail soon after performing his daughter’s last rites 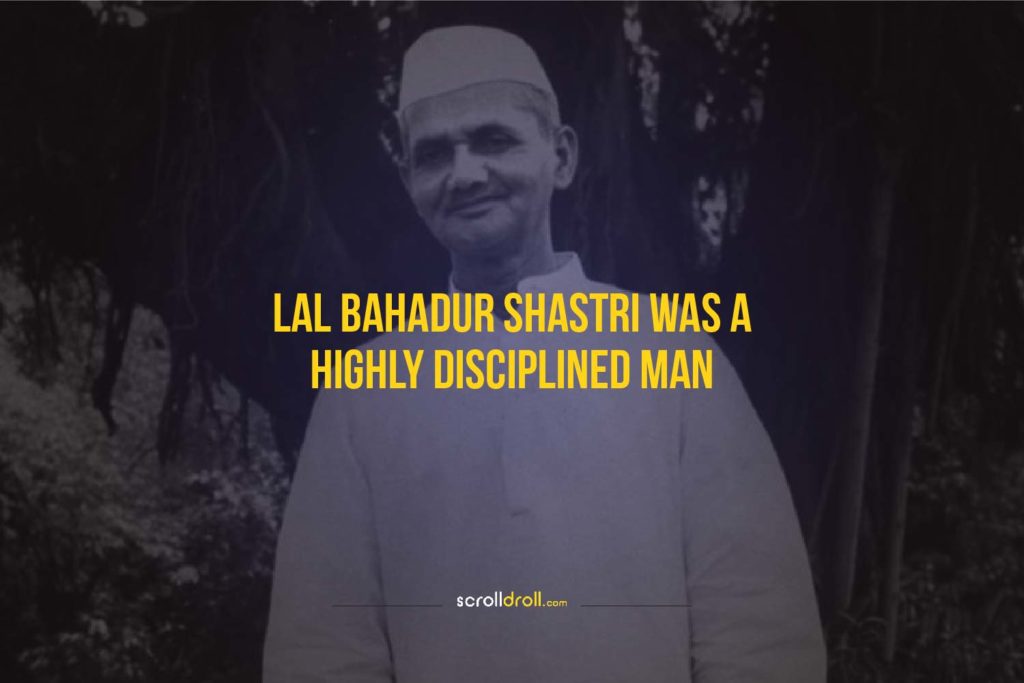 5. After India’s independence, Govind Ballabh Pant took over as the Chief Minister of Uttar Pradesh and he appointed Shastri as the Minister of Police and Transport Control. As the in charge of the transport department, Shastri brought about a meaningful change by appointing women as conductors for the first time. As the in charge of the police department, he replaced the traditional lathis with water jets to put crowds under control. He was also successfully able to control communal riots of 1947 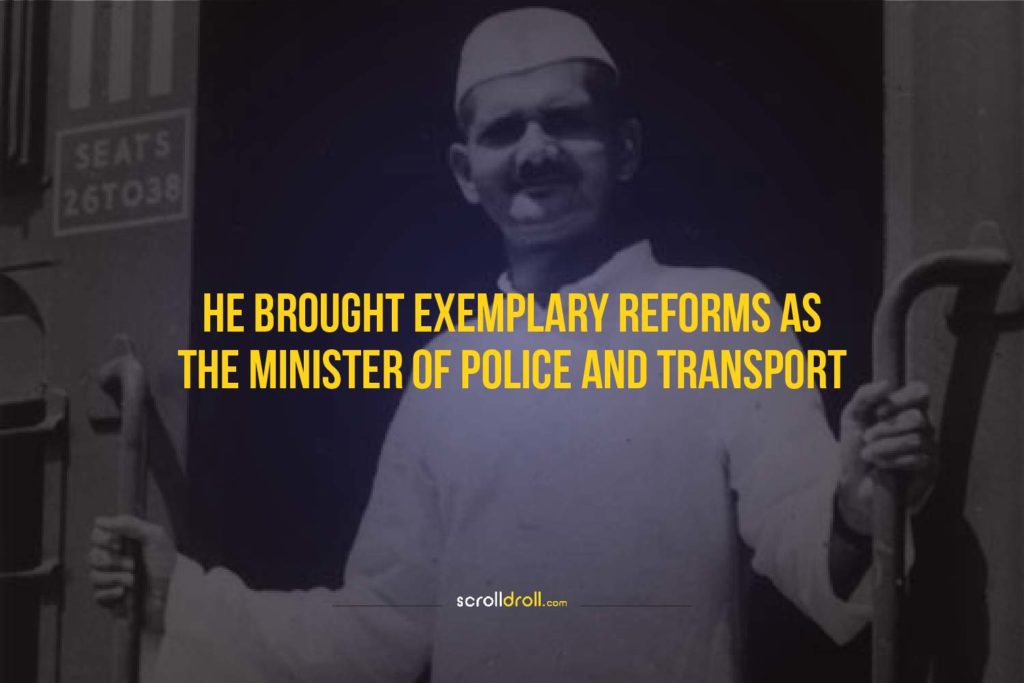 6. When Shastri was completing his term in prison, his wife received a pension of Rs. 50 every month. Once, when his wife visited him in the jail and told him that she was able to save Rs. 10 from the pension, he got annoyed and asked the Servants of People’s Society to cut down his pension and give that Rs. 10 to someone needy family 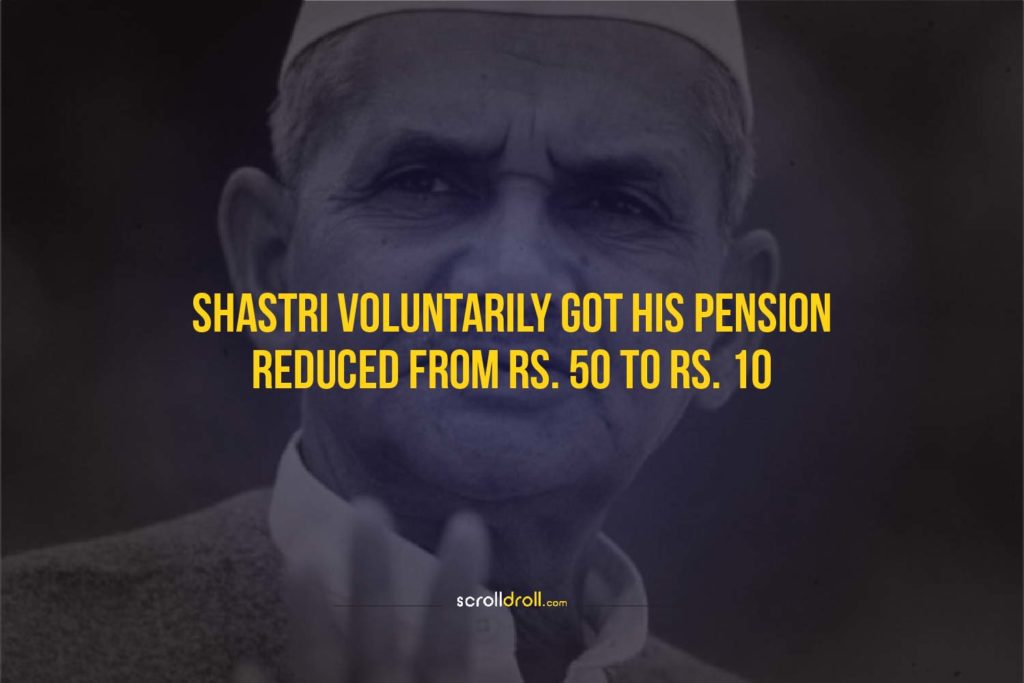 7. When his son received an undue promotion at his job, it irked Lal Bahadur Shastri and he immediately released an order to reverse the promotion 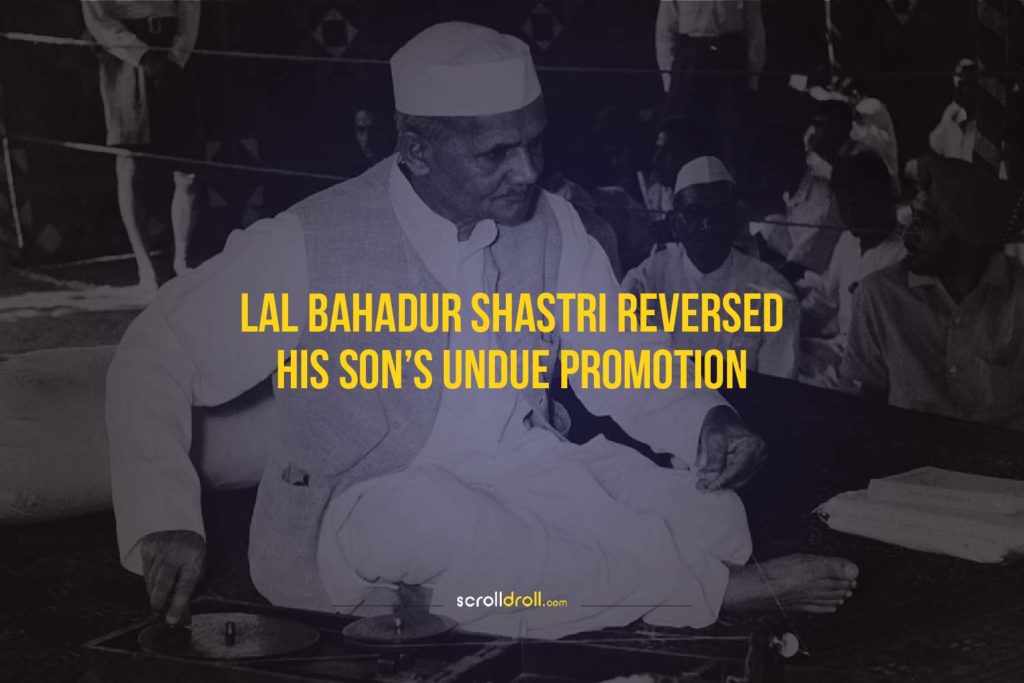 8. A man with high self-esteem and morals, Shastri did not own a car even after becoming the Prime Minister of India. After pestering from family members, Shastri finally asked his secretary to find out the price of a Fiat car. The cost turned out to be Rs. 12,000 and Shastri was short of Rs. 5000. As a result, he applied for a car loan which was sanctioned to him in a jiffy. The bank officer was immediately summoned and inquired whether the bank was equally swift in sanctioning of loans to other customers also 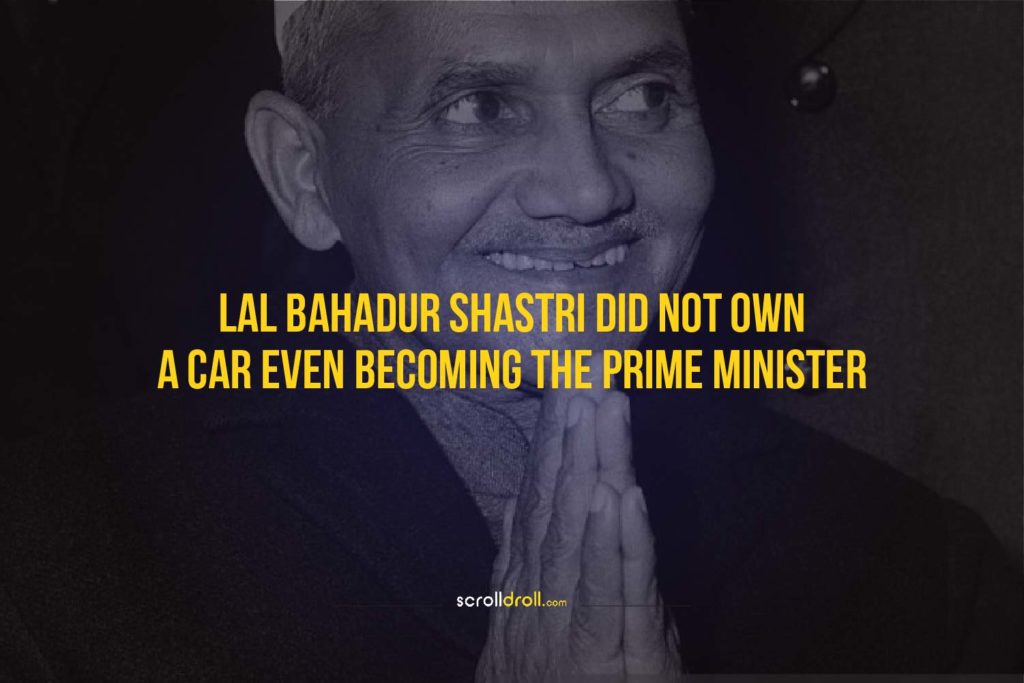 It’s evident how important principles were to Lal Bahadur Shastri, he always followed the right and wasn’t slightly biased even to his family. We thank him for his actions that shaped the future of India. This exceptional scholar and leader must be remembered dearly by the nation for his efforts and just nature.