When it comes to mountaineering, there’s nothing quite as challenging as the Everest – the tallest peak in the world. For many mountaineers and climbers, climbing the Everest is the dream. Of course, not every one gets to fulfill this dream – it takes a special kind of spirit to climb the Everest. Here are 16 interesting facts about Mount Everest that’ll amaze you!

Also read: Interesting Facts About The Olympics- A Dive Into The Games’ History!

1. No one knew that Everest was the highest mountain in the world until 1856 when the Great Trigonometric Survey of India established its height.

That’s right – like many great discoveries, humans didn’t get it right the first time. Kangchenjunga, the highest peak in India, was instead thought to be the highest summit in the world. Of course, in 1856, it was officially established that it was Mount Everest that was the tallest. 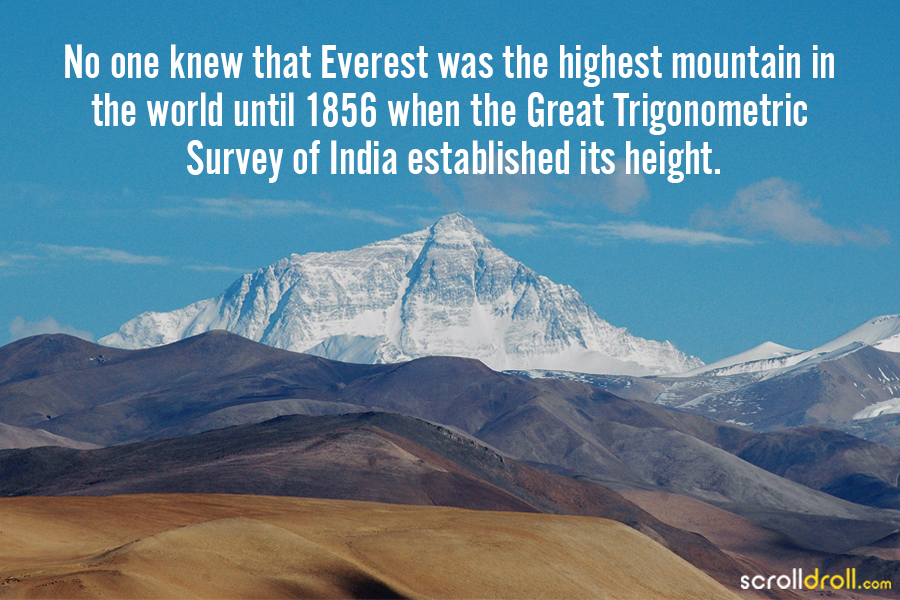 2. Everest is 8848 metres tall –  that’s around the height at which passenger planes fly.

Well that’s one way to reach to the top! 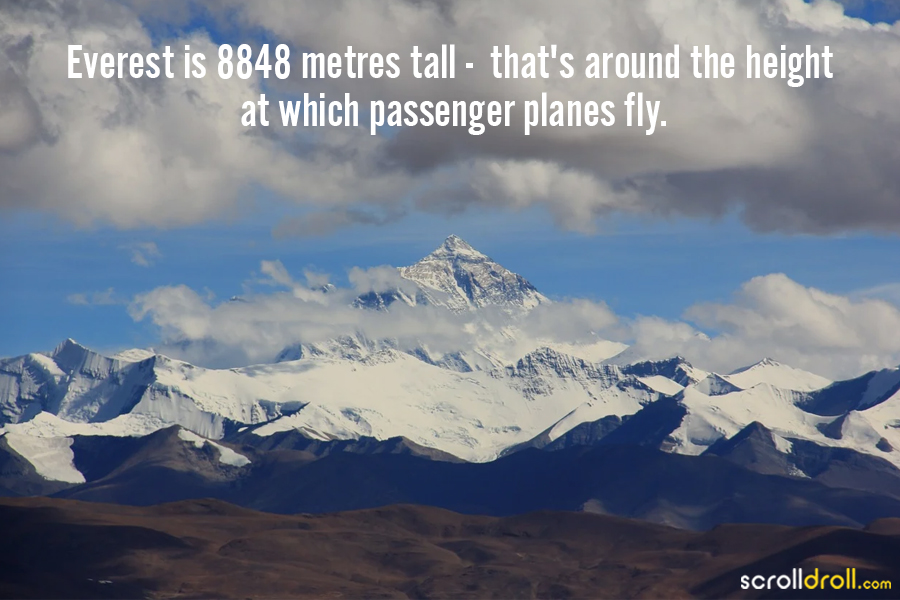 3. Mt Everest is about 60 million years old & grows about 44mm higher every year.

Mt Everest increases in height by about 44 mm every year due to geologic uplift pushing the Himalayas upwards. After the tragic earthquake in 2015 that killed 9000 people in Nepal which also hit the base camp of Everest, scientists believe that the Everest shrank by an inch. 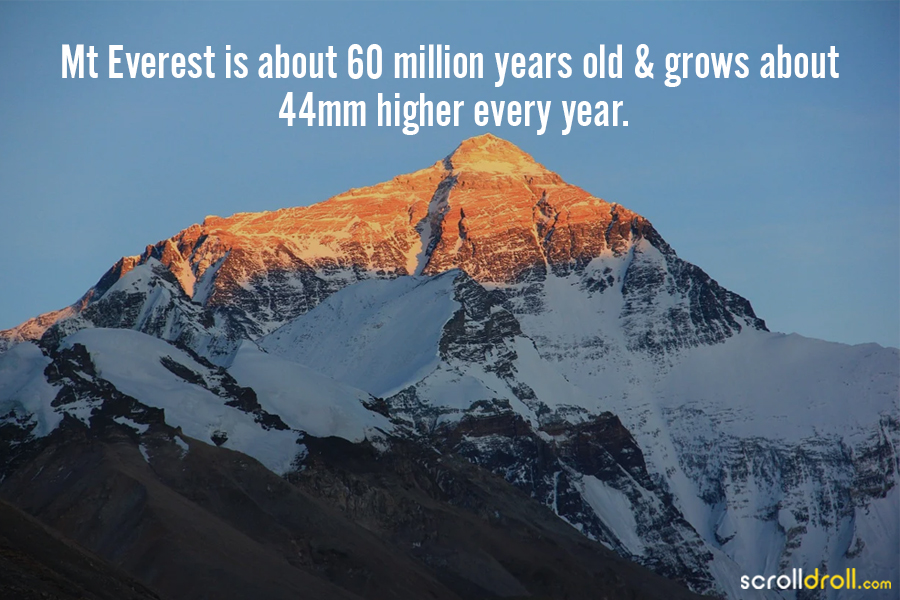 4. Tibet, India, and Nepal are visible from the top of the Everest summit.

Since the Himalayas sprawl over several countries, it is hardly a surprise that one can see Tibet, India as well as Nepal from the highest mountain peak in the range. 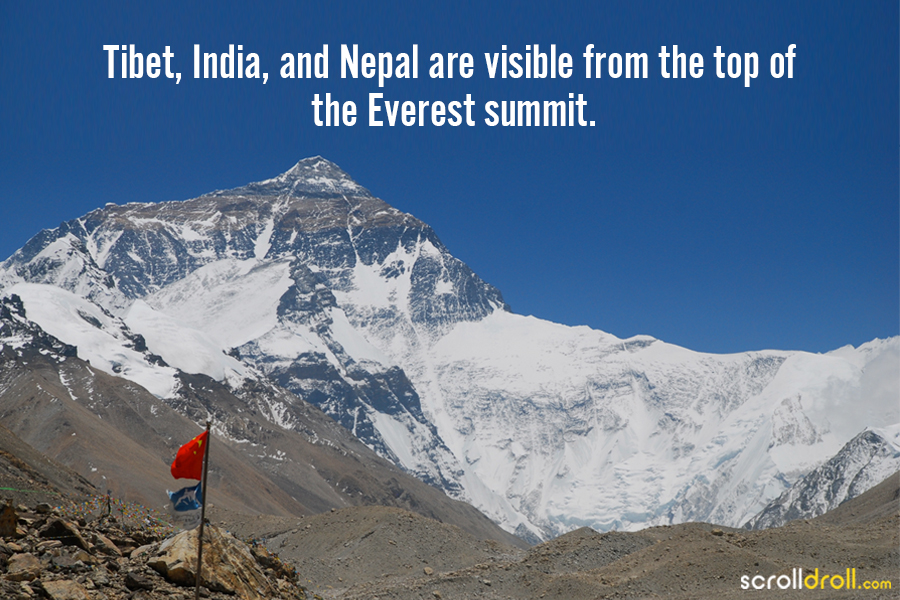 5. Edmund Hillary and Tenzing Norgay were the first to climb the Everest on May 29, 1953

While it is well-documented that Edmund Hillary and Tenzing Norgay were the first to climb the Everest, it was far from the first attempt to climb atop the highest summit in the world. In one of the most interesting facts about Mount Everest, In 1924, George Mallory and Andrew Irvine attempted to climb the Everest, but never returned, birthing speculation about whether the two made it to the top. 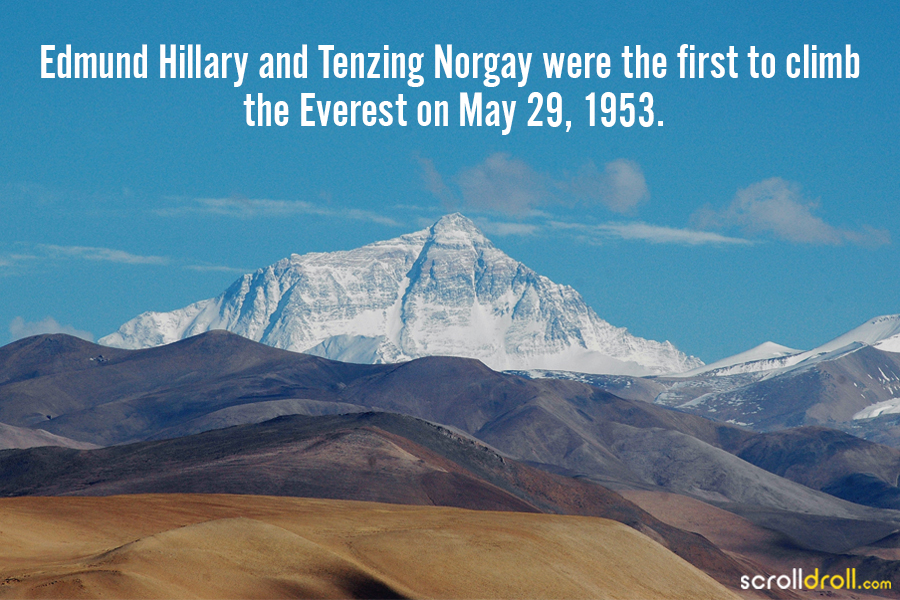 6. Over 800 people attempt to climb the Everest annually & only over 4000 have reached the top so far.

Yep, that’s right. Just because you want to climb the Everest doesn’t mean you can. Not everybody has what it takes to reach the top. 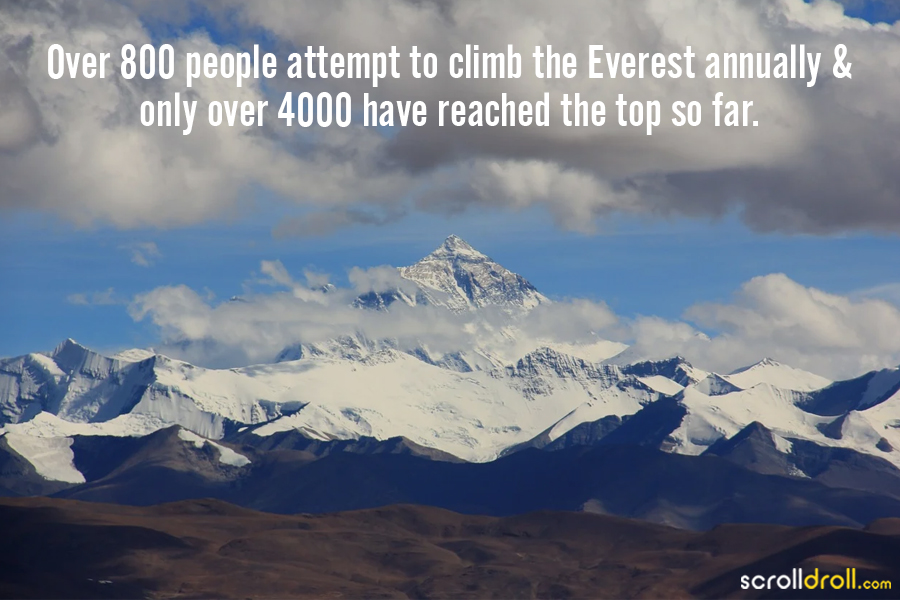 There are around 120 dead bodies of climbers on the mountain which are now landmarks on the way to the top. Many of these bodies are extremely well preserved due to the extreme cold. A dead body called Green Boots indicates how close you are to the summit. Green Boots, however, disappeared in 2015, leading many to speculate that the corpse might have been buried. Another climber named David Sharp attempted to climb the Everest in 2006 all by himself and without a sherpa. He is believed to have reached the top, but ran out of oxygen on his way down. Because of how close he was to Green Boots, many other climbers mistook him for the legendary corpse and failed to help him. He consequently died, causing a huge uproar in the mountaineering community. 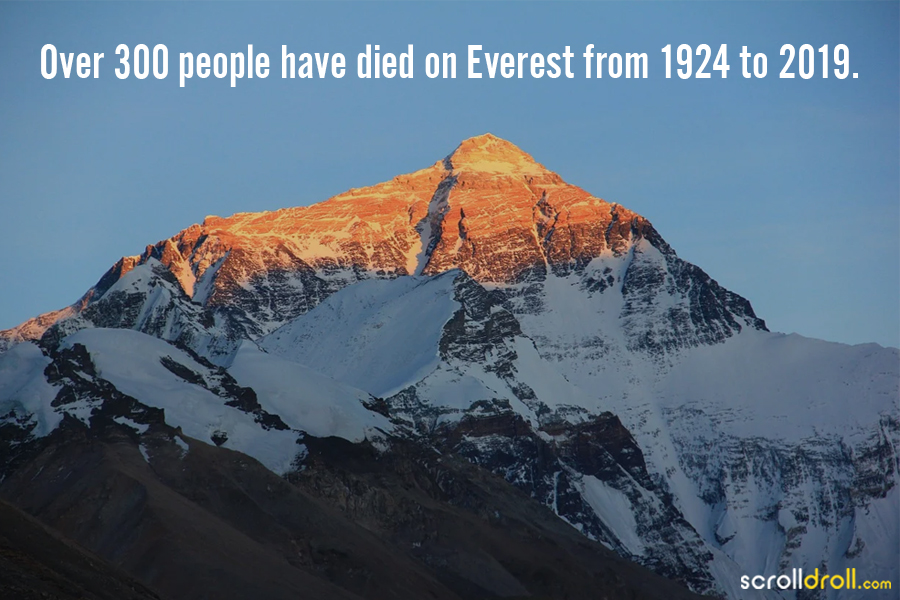 Jordan was accompanied by his father, Paul Romero, and his step mother, Karen Lundgren and three sherpas. At the age of 15, Jordan climbed the Vinson Massif and became the youngest climber in the world to have finished climbing the Seven Summits.

On the other hand, Yuichiro Miura from Japan is the oldest man to climb Everest at the age of 80 years.

Kami Rita Sherpa has made it to the summit of Everest a record 25 times. 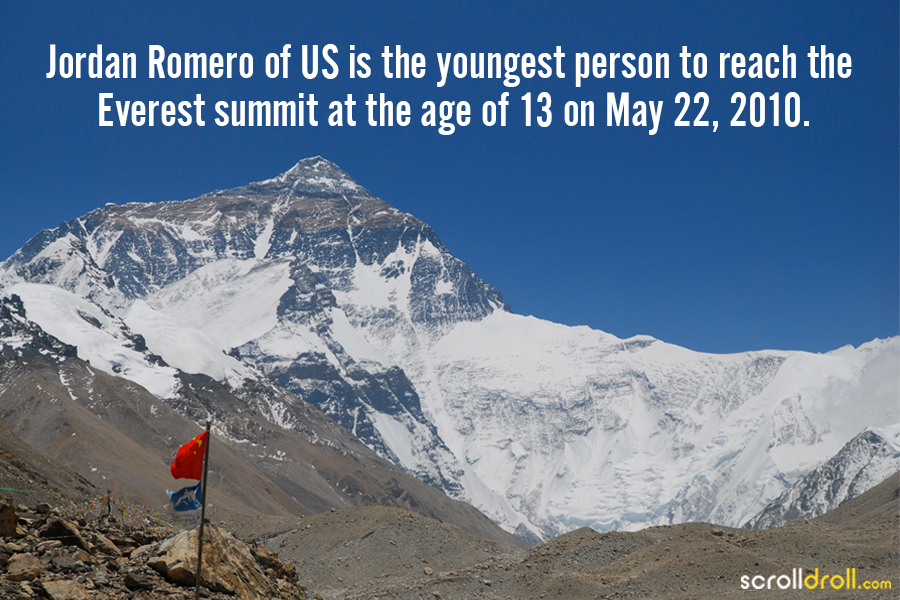 9. There is a weak cell phone signal on the Everest summit. 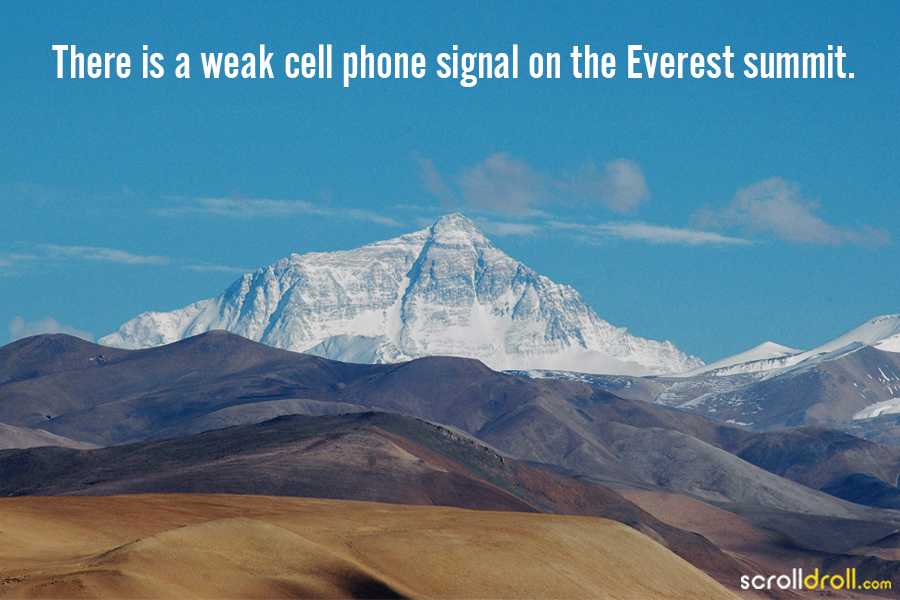 Of course, climbing the Everest is no mean feat, but it also depends on how much money you’re comfortable spending; a single trip might cost one upto 70,000 pounds, and on average costs a climber around 50,000 pounds to climb the Everest. 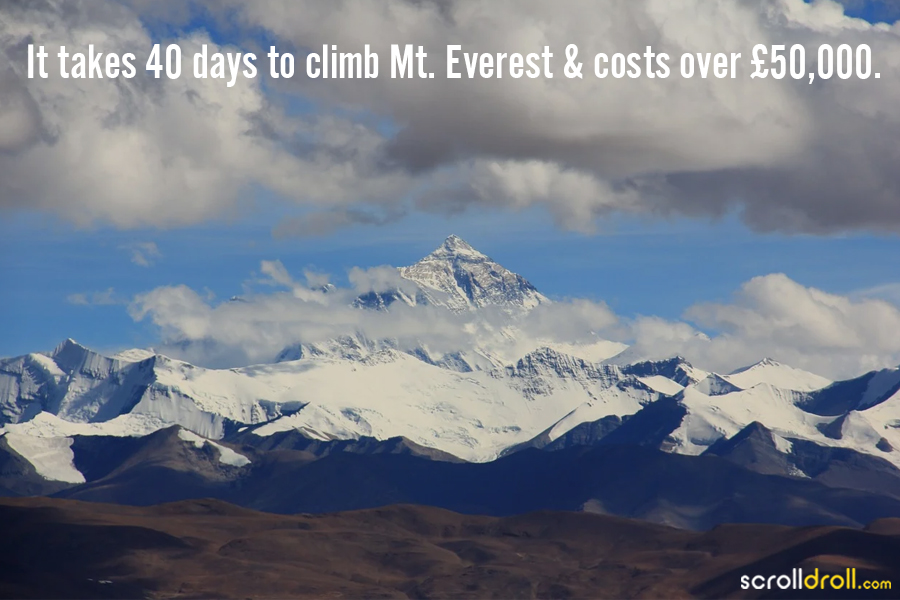 Jordan Romero, the youngest person to ever climb Everest, had to begin his climb from the Tibetan side because of these age-restrictions. 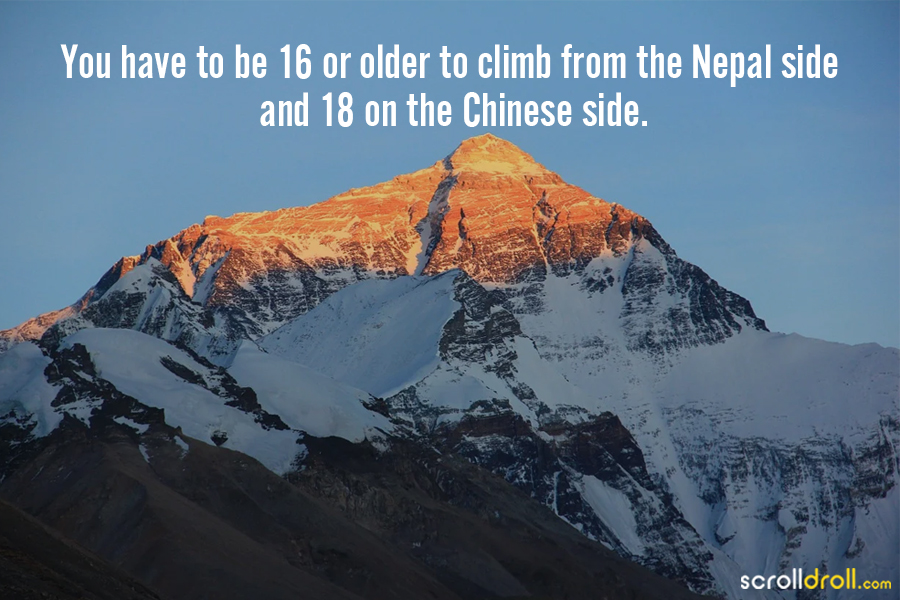 12. Although it is the world’s highest mountain, it can get crowded.

With gross commercialization that has turned Everest into a bit of a Holiday spot, it isn’t unusual to find crowds even on the highest summit in the world. People have reported having to wait in queues to climb certain parts. 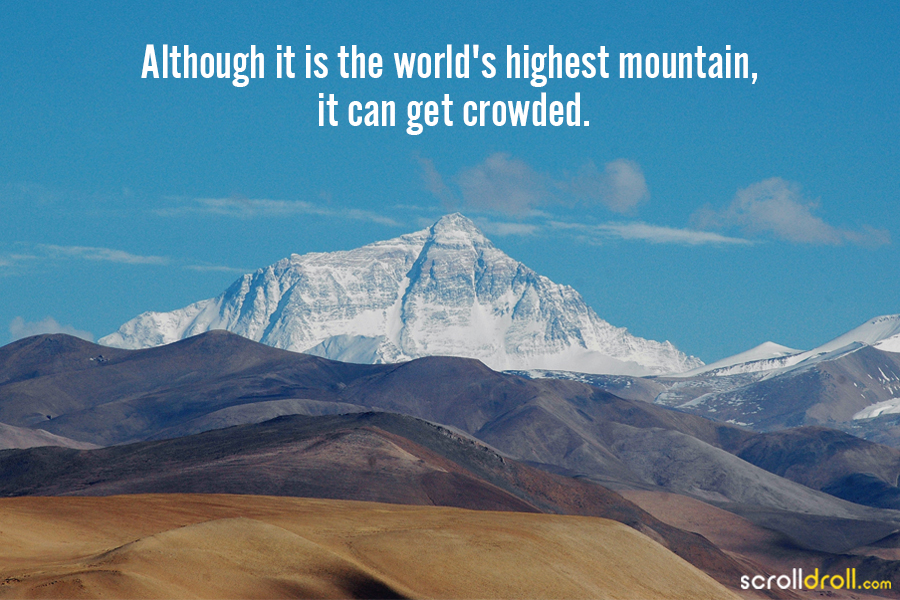 Although now mapped by Google, it took a team 12 days to capture images for Google maps. 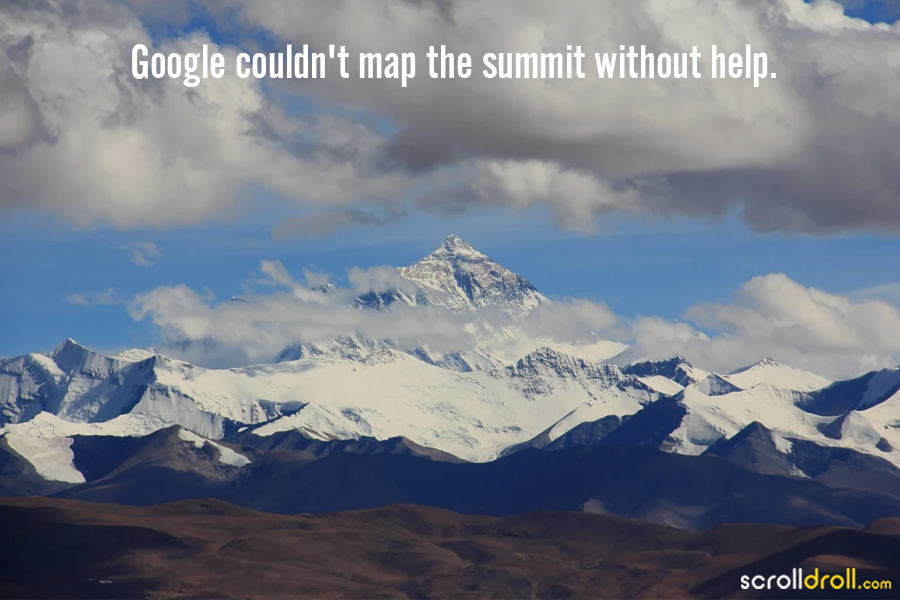 14. The fastest climb to the summit is recorded to be a mind bogling 10 hours 56 minutes.

A sherpa named Lakpa Gelu holds the world record of climbing the Everest under 11 hours! 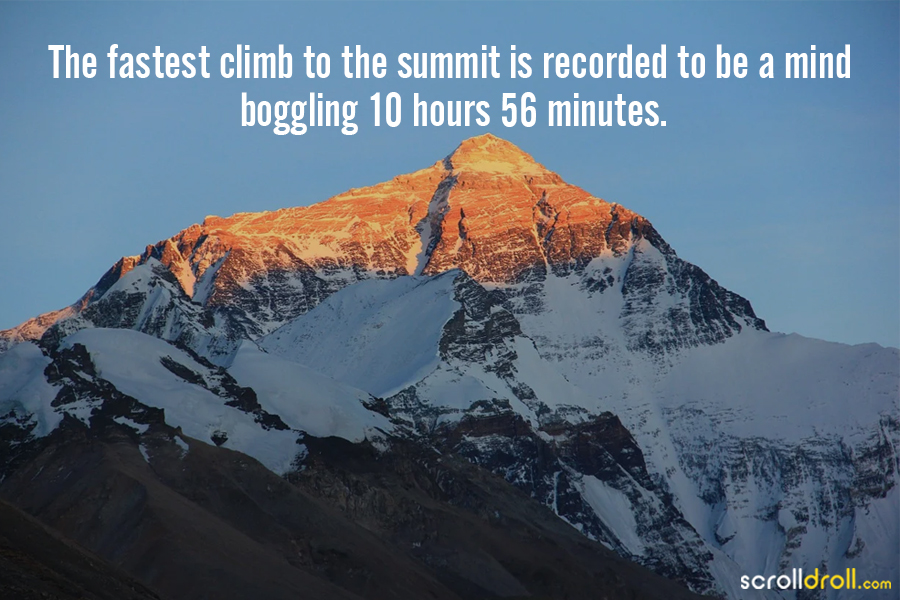 15. There are absolutely no living species on the top of Mount Everest.

While one might come across various flora and fauna on their way, the weather conditions are way too harsh at the top for any living species to survive. 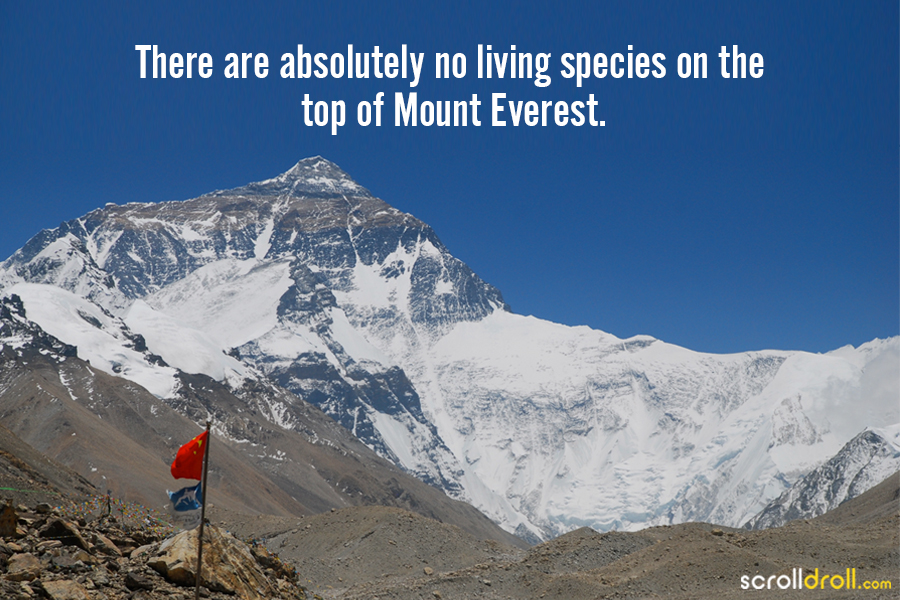 16. Helicopters can’t fly to the top of mount everest.

While Jumbo Jets and passenger airplanes might be able to fly at the height of the mighty Everest, it is no match for a helicopter, which is also why resuce missions tend to be so difficult on the mountain as they can only be done manually till a certain altitude. 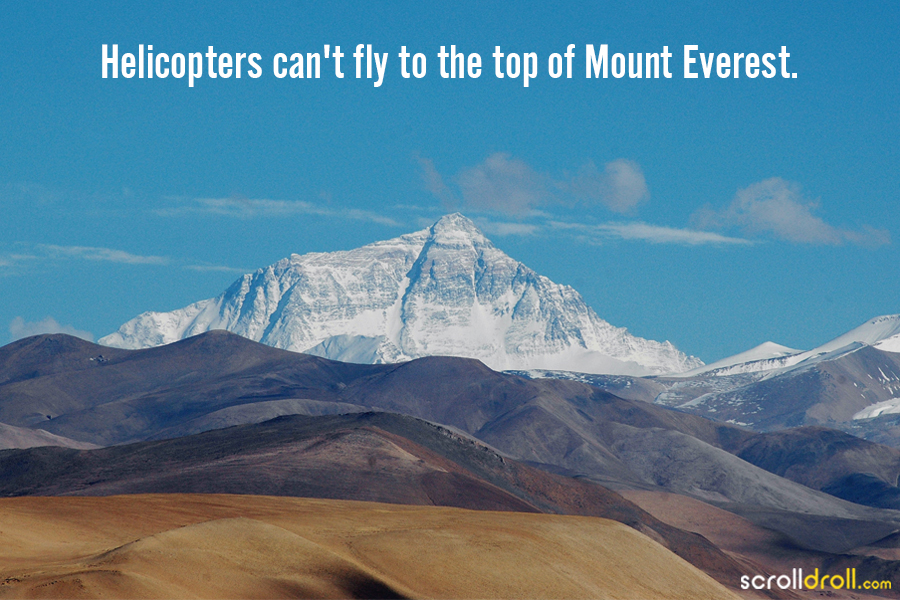 Did you like these interesting facts about Mount Everest? Tell us in the comments below what you’ll want to learn about next!

Shangri La Is Your Place For A Nice Game