When the story of India independence is told, Subhas Chandra Bose is a name that appears in golden letters. Bose was the only person to have led a well organized military fight against the British rule in India with Azad Hind Fauj. Subhas Chandra Bose quotes throw light on the vision, ideas and believes that shaped up the life and work of this Indian freedom fighter.

From ‘Dilli Chalo’ to ‘Tum mujhe Khoon do, Mein tumhe Azaadi dunga’, Subhas Chandra Bose quotes defined India’s resolve for freedom in the 1940s. A ex-member of the Congress, Bose believed a military campaign and a mass uprising against the British Raj was the only way to attain freedom as opposed to the idea of non-violence from Congress and Mahatma Gandhi. 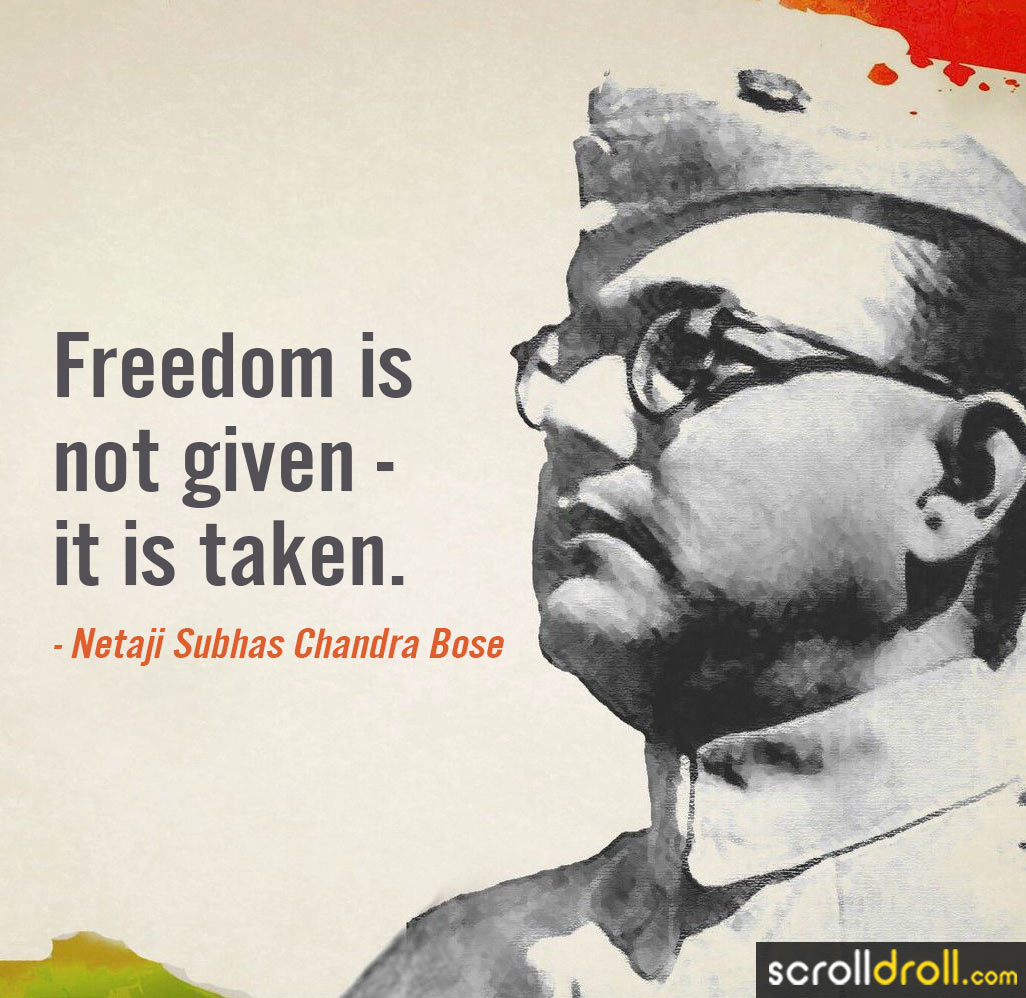 2. The secret of political bargaining is to look more strong than what you really are. 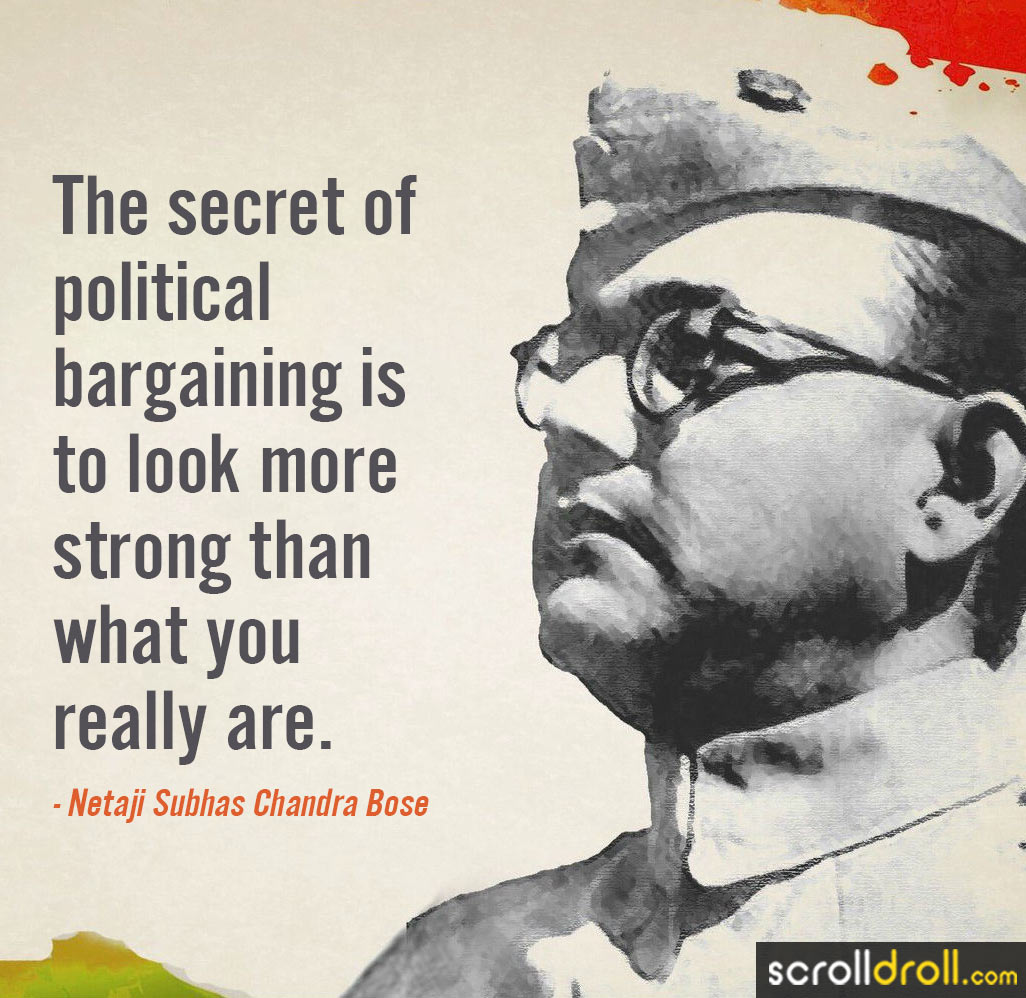 3. Men, money and materials cannot by themselves bring victory or freedom. We must have the motive and power that will inspire us to brave deeds and heroic exploits. 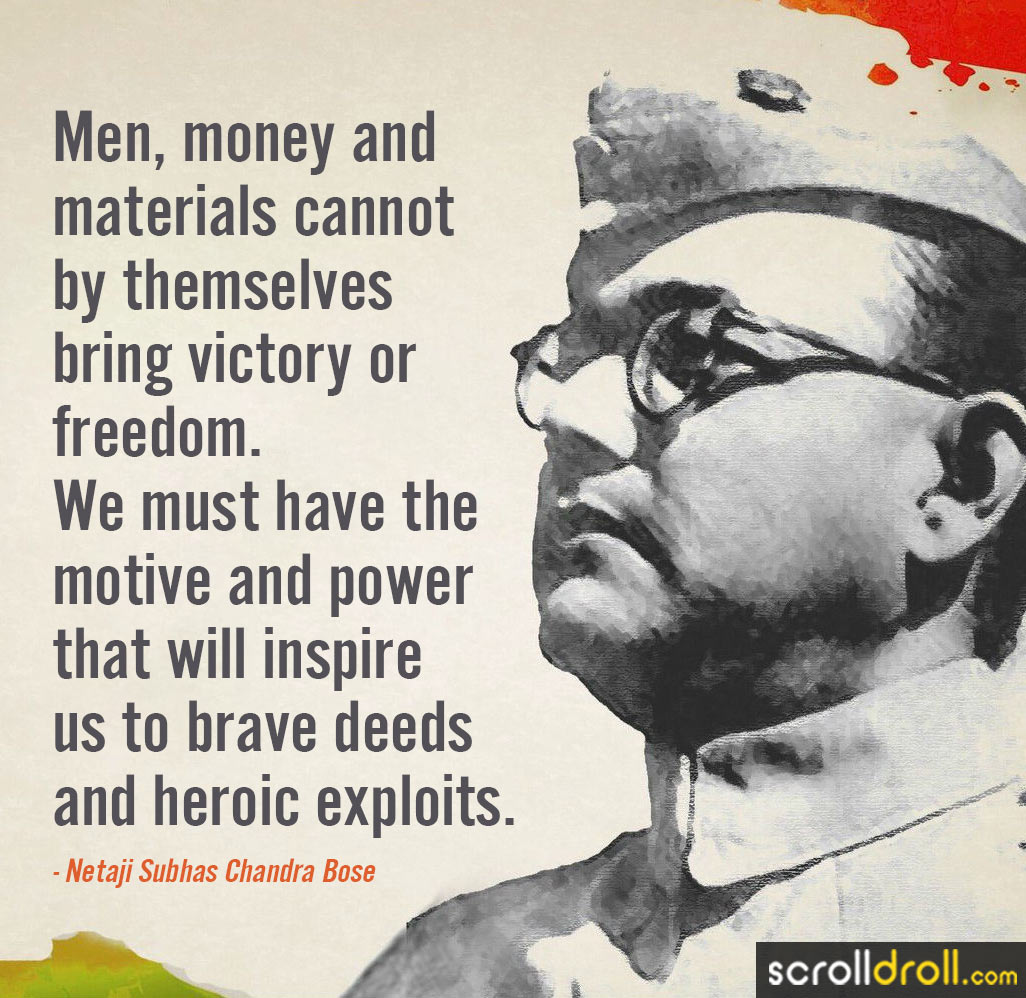 4. One individual may die for an idea, but that idea will, after his death, incarnate itself in a thousand lives. 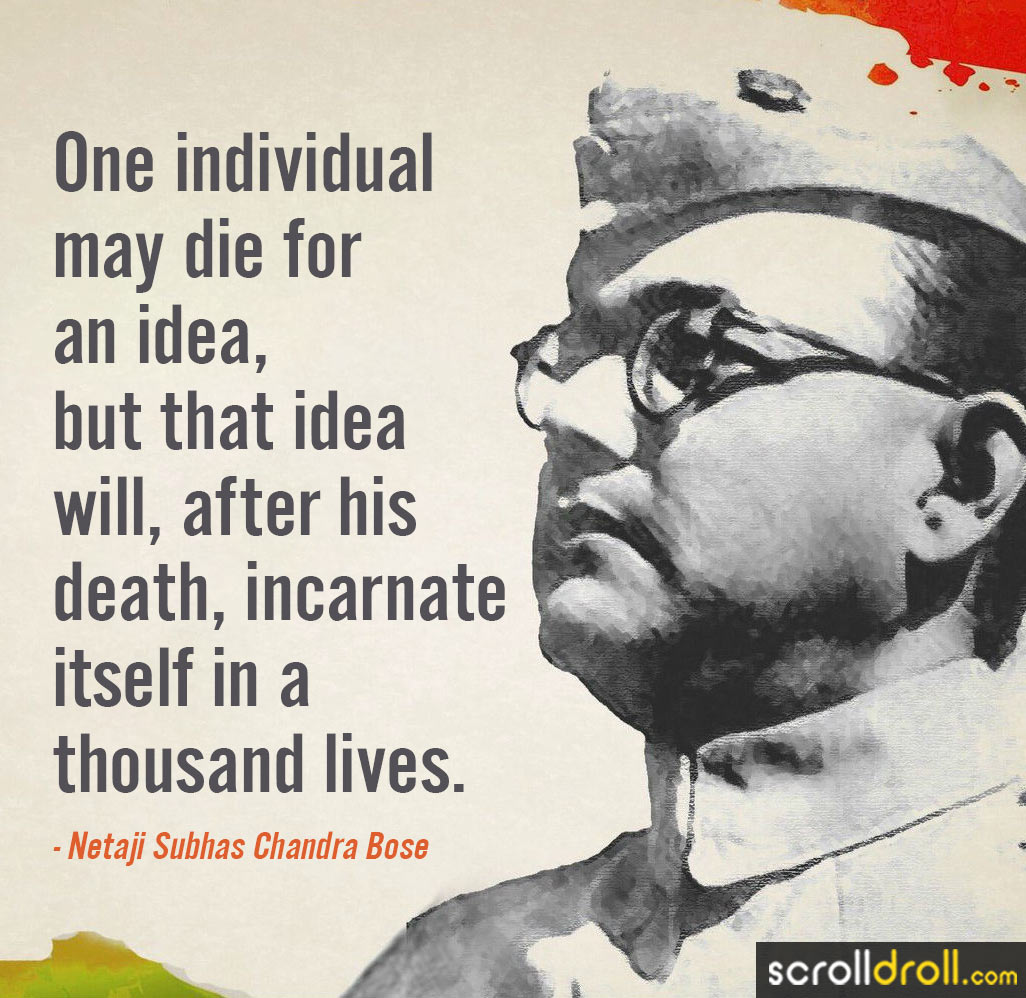 5. It is blood alone that can pay the price of freedom. Give me blood and I will give you freedom! 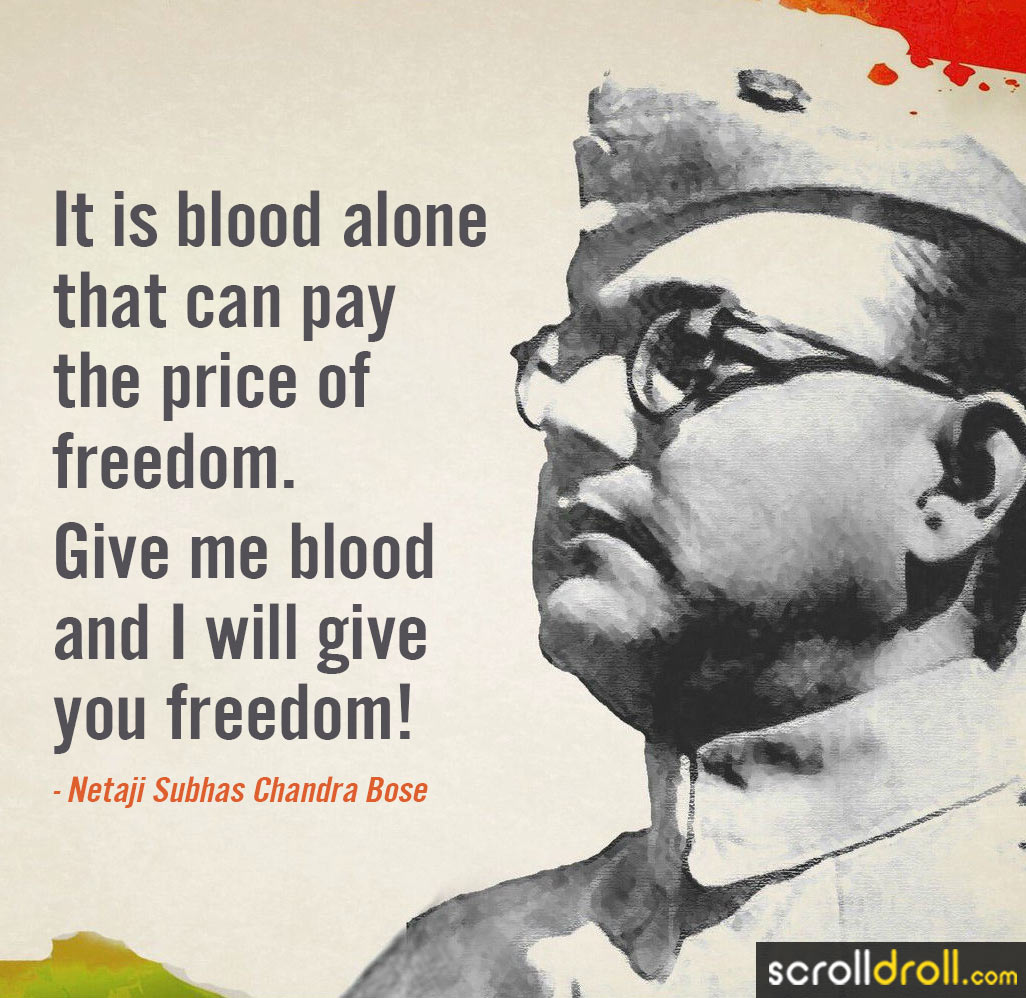 6. Life loses half its interest if there is no struggle – if there are no risks to be taken. – Netaji Subhas Chandra Bose 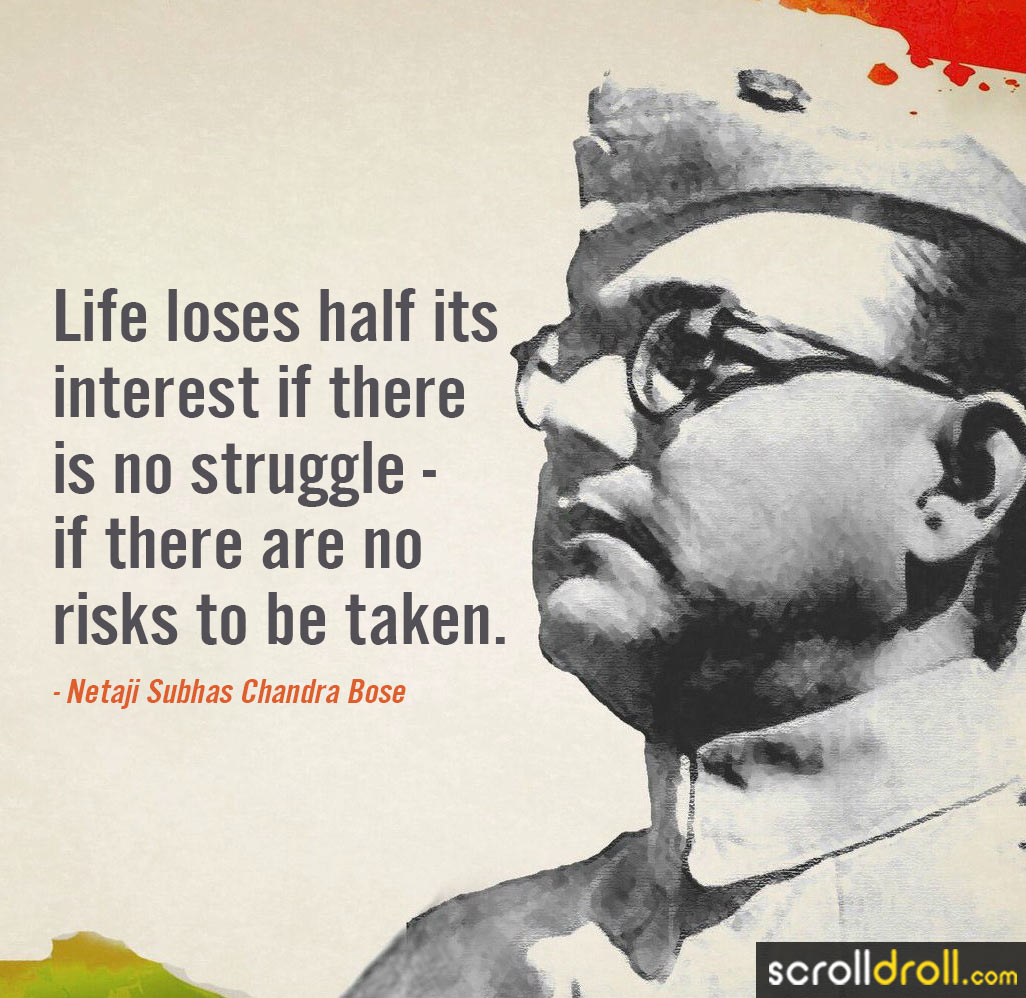 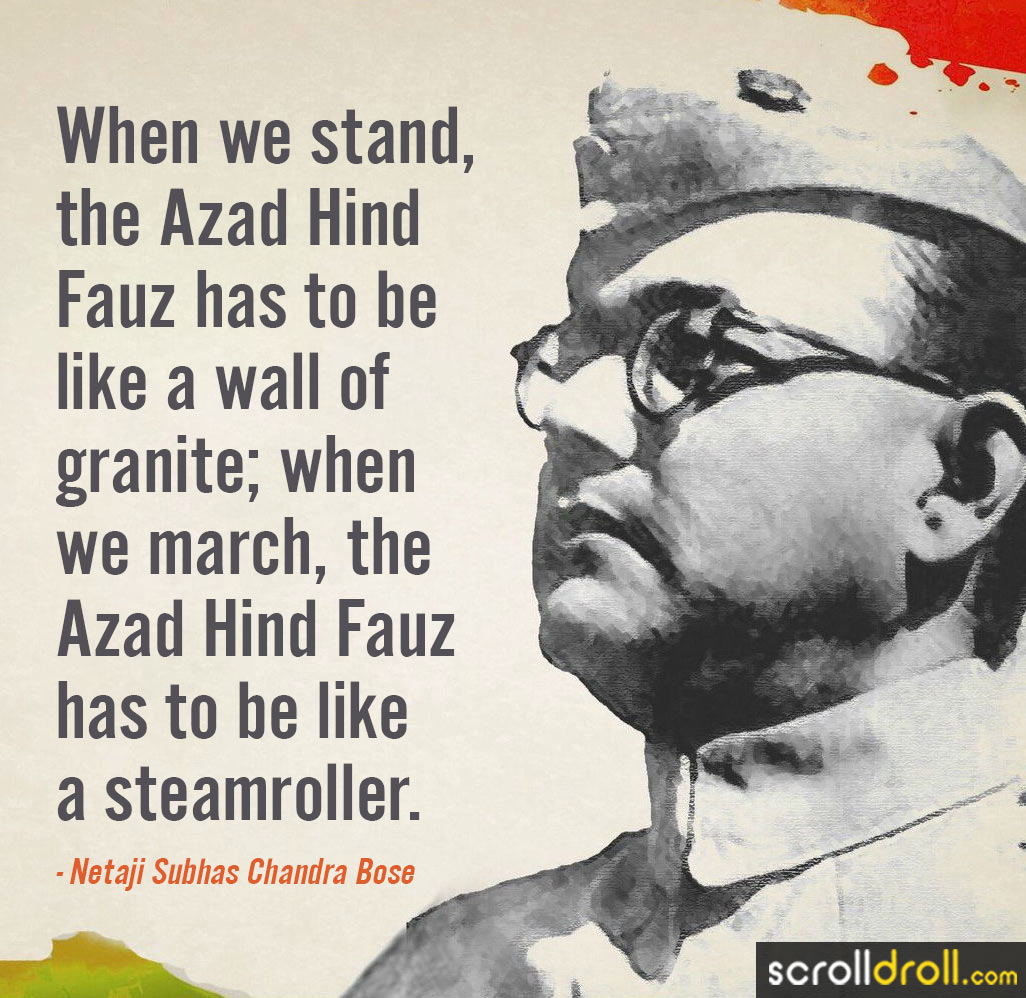 8. Soldiers who always remain faithful to their nation, who are always prepared to sacrifice their lives, are invincible. 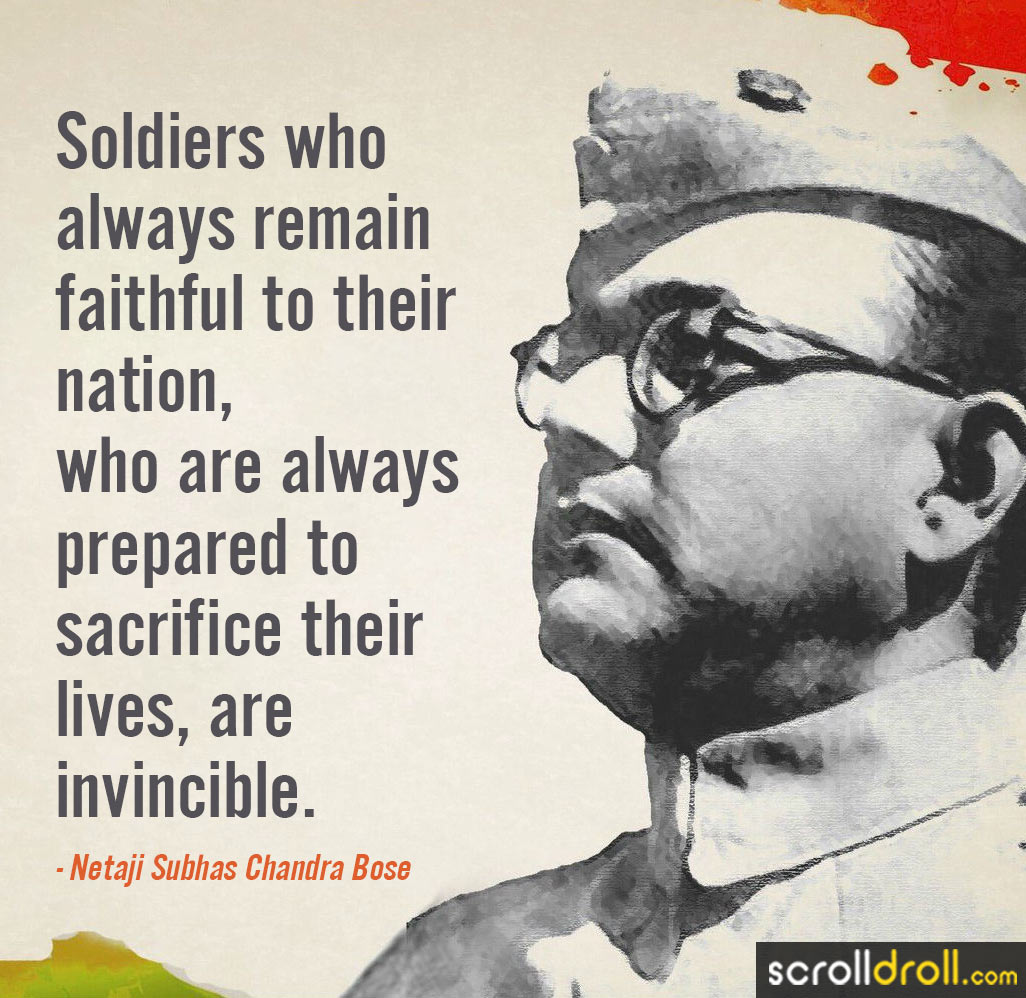 9. No real change in history has ever been achieved by discussions. 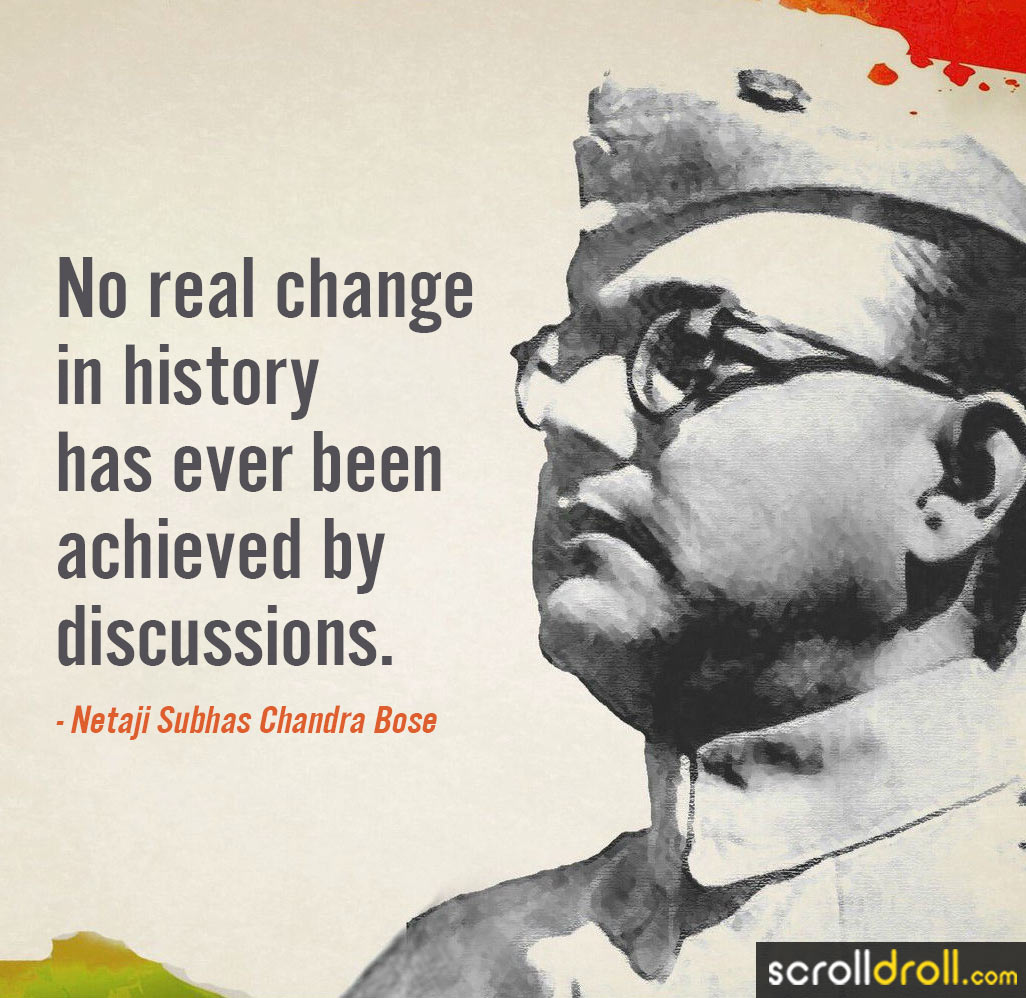 10. It is only on the basis of undiluted nationalism and of perfect justice and impartiality that the Indian Army of Liberation can be built up. 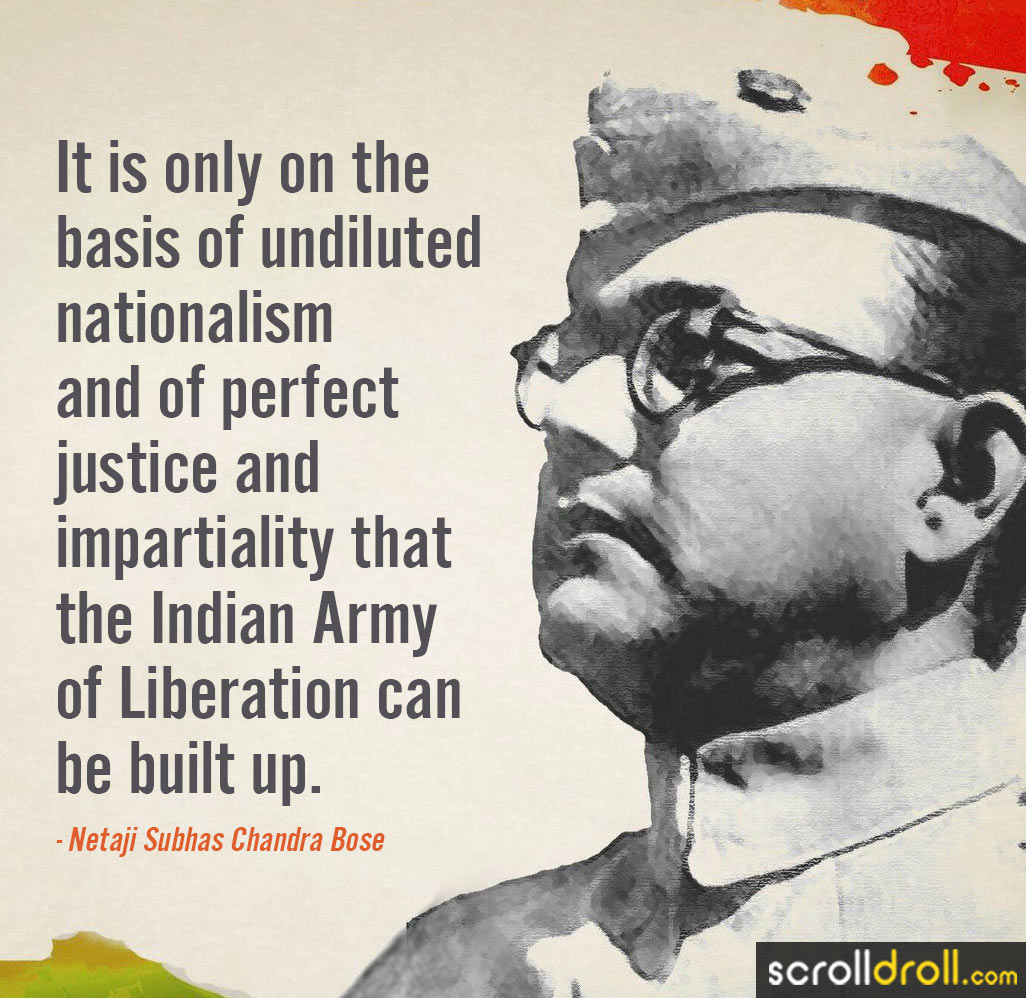 11. We should have but one desire today – the desire to die so that India may live; the desire to face a martyr’s death, so that the path to freedom may be paved with the martyr’s blood. 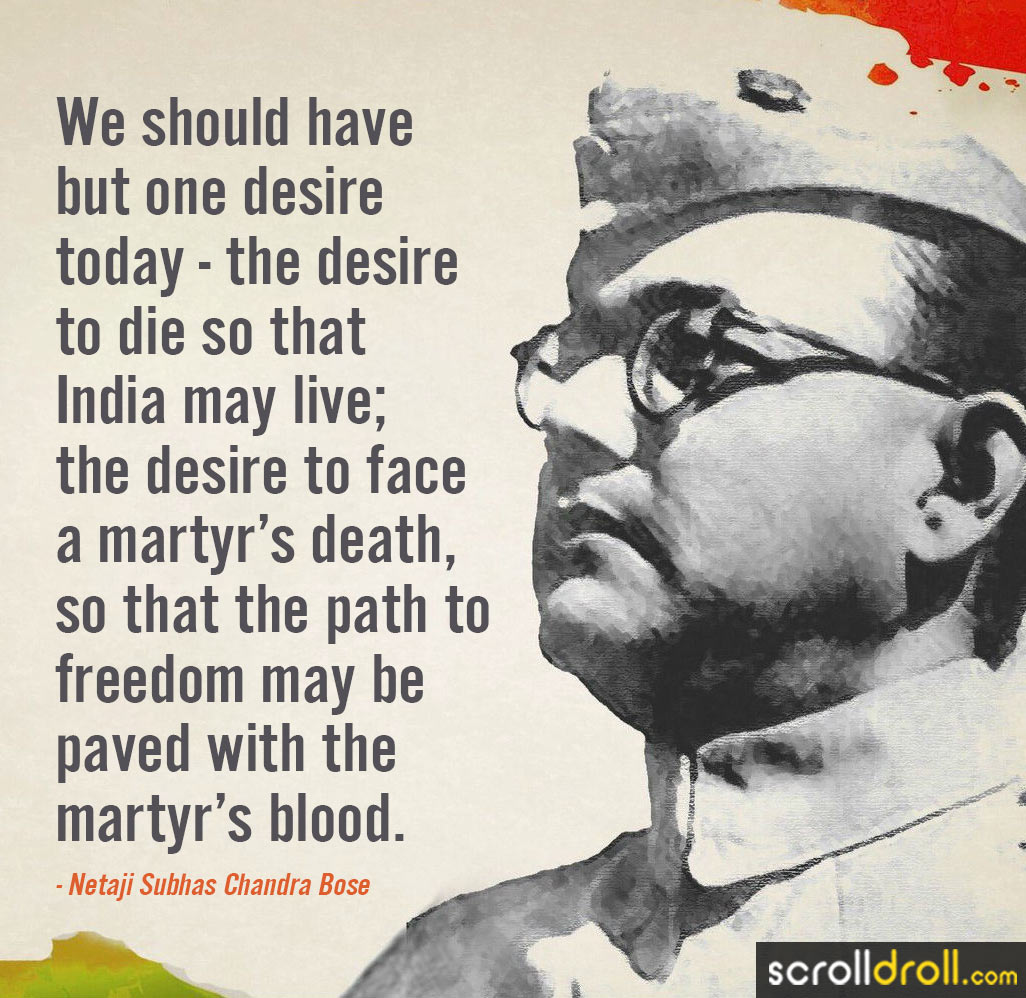 12. India is calling. Blood is calling to blood. Get up, we have no time to lose. Take up your arms! We shall carve our way through the enemy’s ranks, or if God wills, we shall die a martyr’s death. And in our last sleep we shall kiss the road that will bring our Army to Delhi. The road to Delhi is the road to Freedom. Chalo Delhi! 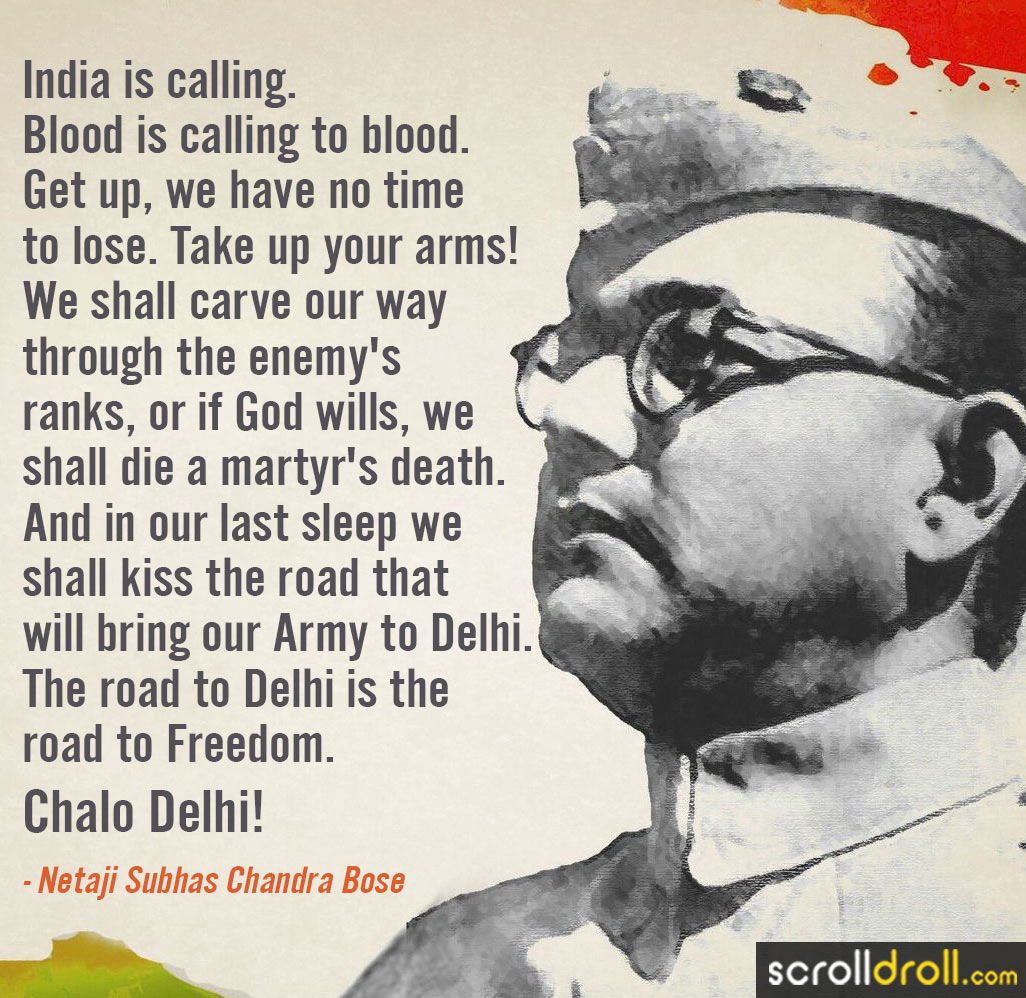 13. Never lose your faith in the destiny of India. There is no power on Earth which can keep India in bondage. India will be free and, that too, soon. 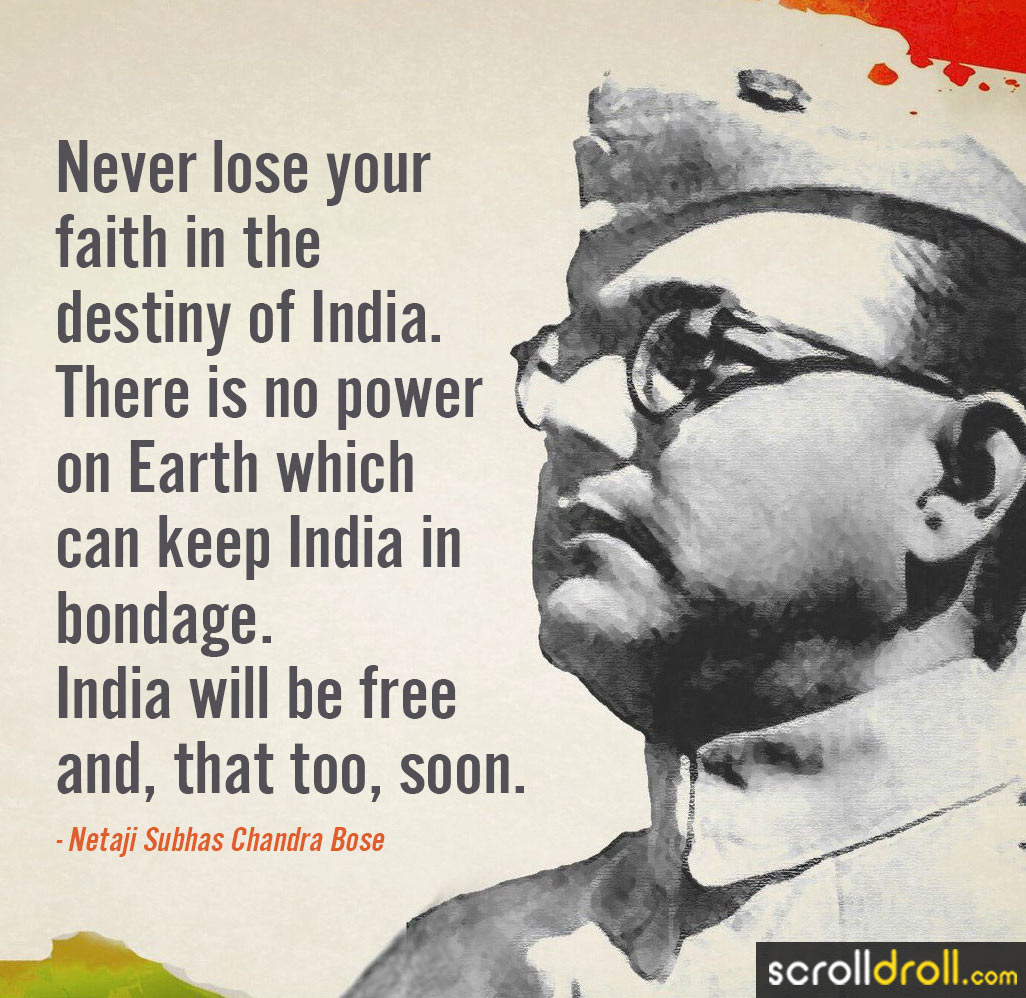 14. Forget not that the grossest crime is to compromise with injustice and wrong. Remember the eternal law: You must give, if you want to get. 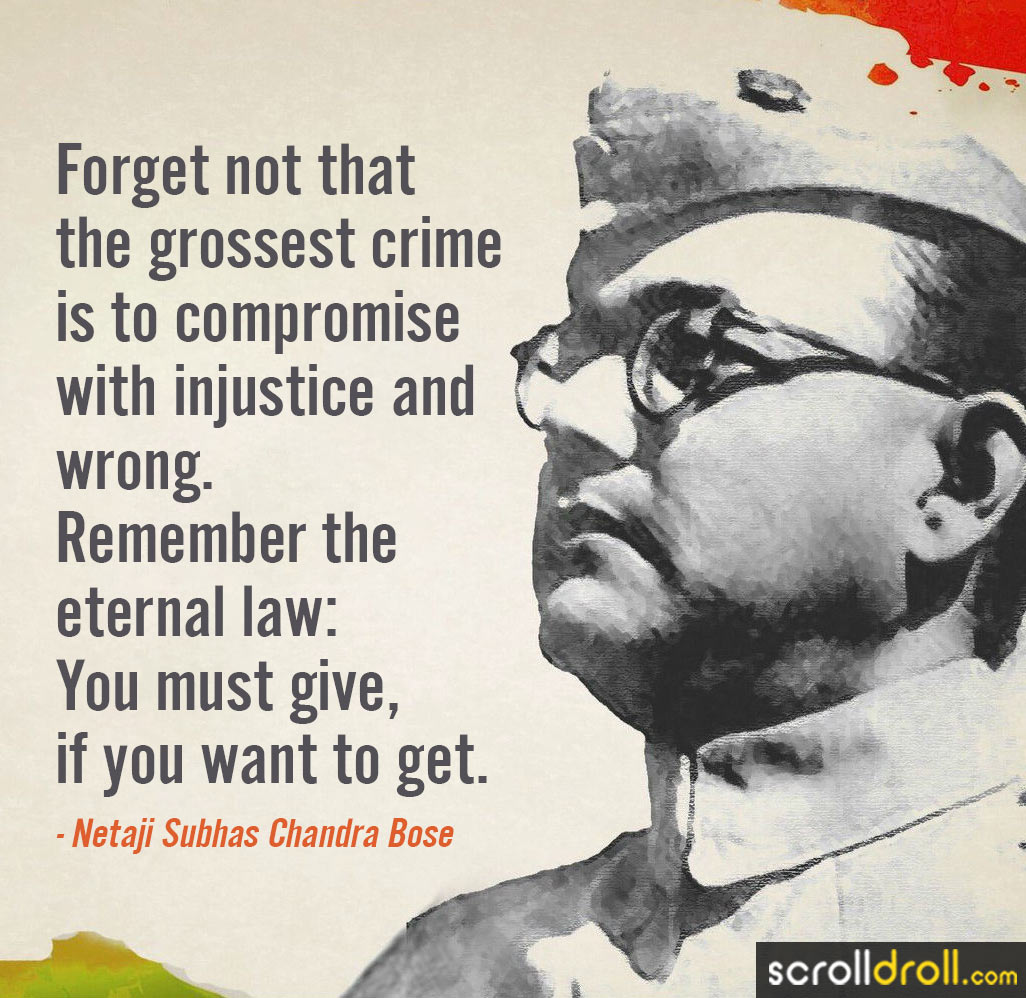 15. It is our duty to pay for our liberty with our own blood. The freedom that we shall win through our sacrifice and exertions, we shall be able to preserve with our own strength. 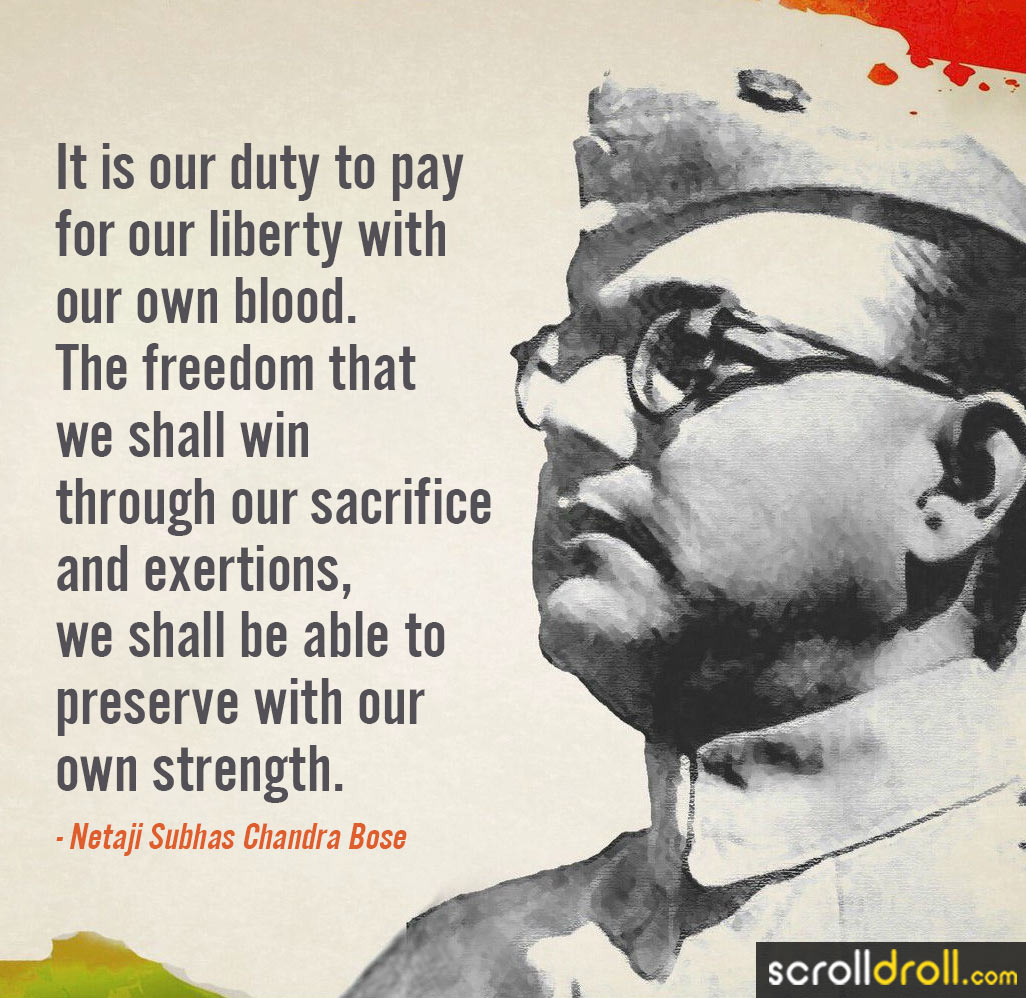 16. Reality is, after all, too big for our frail understanding to fully comprehend. Nevertheless, we have to build our life on the theory which contains the maximum truth. We cannot sit still because we cannot, or do not, know the Absolute Truth. 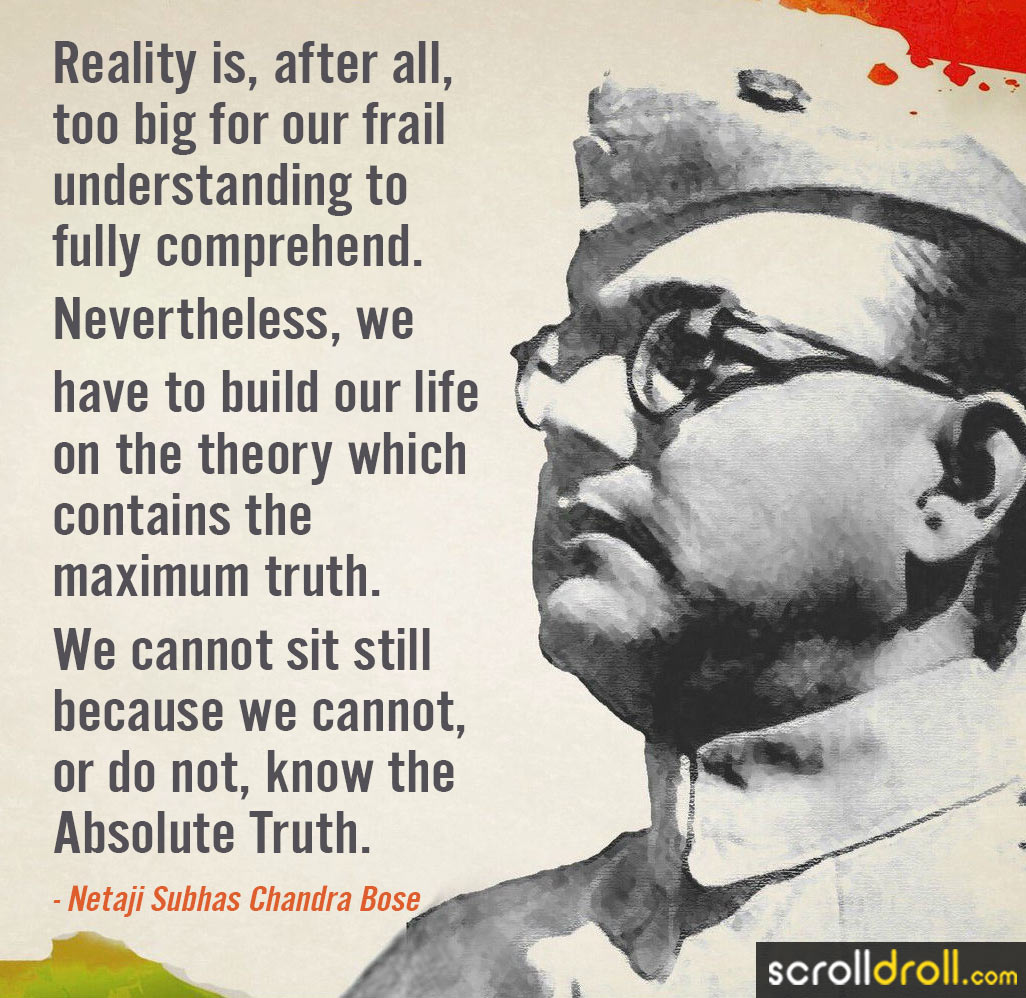 17. We must build up our national defense on such an unshakable foundation that never again in our history shall we lose our freedom. 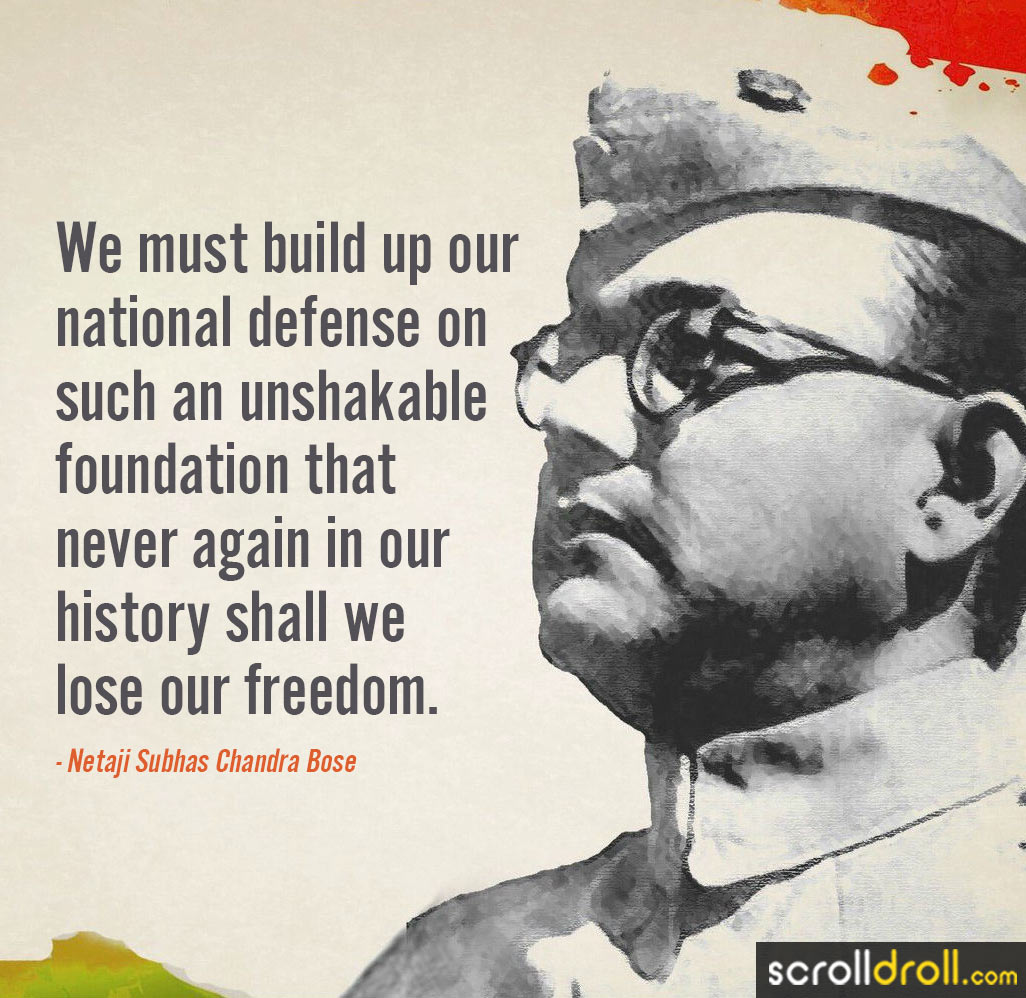 Azad Hind Fauj or the Indian National Army was able to hoist the Indian National tricolor in various parts of India in 1944 fighting the British forces. While INA is never told to have possessed a grave threat to the Imperial British Empire in India, Subhas Chandra Bose’s struggle did free some Indian territory including Andaman & Nicobar Islands and part of Manipur and Nagaland. This struggle inspired thousands of Indians to join the freedom movement while giving the Britishers a message that Indians would go any lengths in its quest for a free and Independent country.

Which of these Subhas Chandra Bose quotes did you find the most inspiring?