In the world of anime, romance as a genre has enjoyed incomparable supremacy. Apart from the multiple great romance anime series, there are several movies that have presented every shade of love in the best way possible. These romantic anime movies will surely change your perception of love for the better. You will start seeing the world in rainbow colours, just like it should be seen. This list is dominated by the movies of Makoto Shinkai and Hayao Miyazaki, but that’s no surprise. Get ready to be embraced by the sheer adorability and magnanimity of romance anime as you cruise through some of the greatest and best romantic anime movies ever!

So, ready to fall in love?

A story about love had never been so heart-wrenchingly good. Get ready to enter into a world quite different from the one we see, but which has emotions quite similar to the ones we feel. Right from the beginning of this Makoto Shinkai wonder, you’ll be hooked, not just by the picturesque animation but also by the brilliant plot. This is not the kind of movie that you can fit into just one genre. It is a well-balanced mixture of all that is good and true. The oh-so-good music by Radwimps will just leave you speechless and mesmerized. It is, without a doubt, the best romantic anime movie ever made. 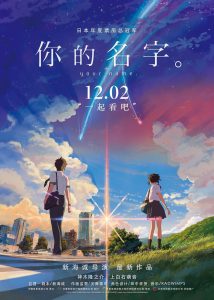 2. I Want to Eat Your Pancreas

Tearjerker alert! The name sure sounds a little creepy. But do not judge this movie by its name. The name is derived from an ancient Japanese belief that you’ll know when you watch the movie. No spoilers here, don’t worry. A boy finds the secret diary of one of his classmates in the hospital waiting room and learns that she is suffering from a fatal pancreatic illness. He helps Sakura experience all that she has on her bucket list before she dies. In turn, he learns the importance of friendship and starts opening up to the world. An endearing love story indeed. 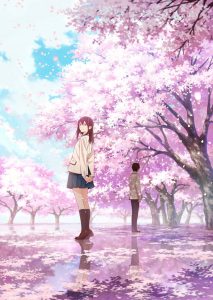 3. The Garden of Words

Unlike its name, the movie says a lot with minimal use of words. It lets the magnificently beautiful animation of Shinkai do most of the talking. A 27-year-old teacher and a 15-year-old student escape from the web of everyday life and meet each other in a garden. The two end up filling the voids in each other’s lives in the most poetic way possible. You can feel the love mixed with petrichor through the screen and that’s the only thing that is surreal about this highly realistic movie! 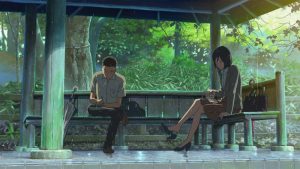 There are a huge amount of anime gifts you can see and buy online or in real stores, but finding romantic-themed anime movie gifts is not much easy. If you are a diehard fan to romance or looking for the best gifts for your fan clubs, you can get affordable but charming accessories at enamelpins.com or GSJJ. High-quality enamel pins, keychains, and magnets are easy to be customized, and that’s perfect to memorize the most meaningful movie scenes and your favorite characters. And if you are an owner of a Japanese grocery store, you can go with beautiful custom buttons and stickers with your store logo as promotional gifts or giveaways. That’s definitely a win-win.

Hayao Miyazaki is a big name in the anime world. His works under the banner of the prestigious Studio Ghibli have always been examples of perfection and brilliance. Howl’s Moving Castle is an unusual love story between a wizard named Howl and a young woman named Sophia. Sophia ages prematurely under the curse of an evil witch and the Howl goes above and beyond in order to break the curse. This fantasy film is considered one of the most romantic anime movies of all time. 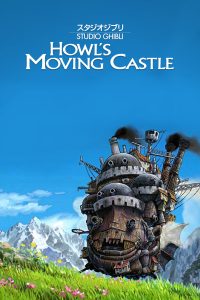 5. The Night is Short, Walk on Girl

In what seems like a story by James Joyce, a young girl spends an insanely long night in the city of Kyoto, partying all along and meeting different people. Her senpai, who is madly in love her with follows her around trying to draw her attention in a way that it would seem like a coincidence. This unusual romantic comedy anime is exactly what you need to see if you are looking for something fresh. Even the animation is quite different from what we are used to, which makes the experience full of wonder. 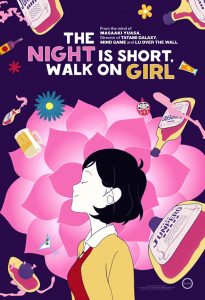 Do you know how my friend got me interested in watching this hour-long movie? He just told me the fact that 5 cm/s is the speed at which cherry blossoms fall from the tree to the ground. That’s what this movie gives you, facts. It hits you reality after making you wear the safety gear of hope. If love is like spring, isn’t there a winter that awaits it? Makoto Shinkai never disappoints. 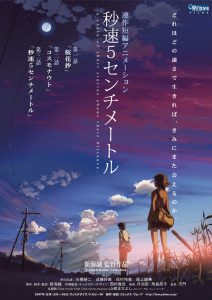 Doukyuusei’s literal translation is classmates. This movie is considered Shoko Nakamura’s masterpiece because of the simplicity with which it presents human emotions. Hikaru Kusakabe, a member of a rock band, decides to help his classmate Rihito Sajou, a straight-A student, with his singing for the upcoming chorus festival. The two boys start developing feelings for each other. What follows is a heartwarming love story that will surely pull every string of your heart. 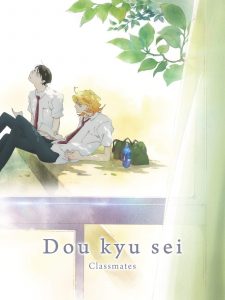 8. Whisper of The Heart

If a love story starts from a library, mark my words, it is going to be epic. Shizuku Tsukishima finds out that all her favourite books have been checked out by a certain boy (Seiji) from the library. When they finally meet, it’s only natural that they fall in love. Seiji, with his determination and ambition, inspires Shizuku to have a dream of her own. And yes, this movie has the Japanese version of the song ‘Country Road‘ in it. 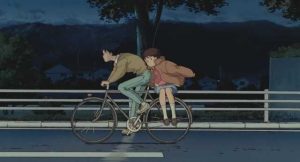 This fictional biography on the life of Jiro Horikoshi is perhaps one of the most beautiful anime romantic movies ever made by Studio Ghibli. Although, the main theme is not of romance but of Jiro chasing his dream of creating the infamous Mitsubishi A6M Zero fighter aircraft and the toll that it takes on him. The movie has anti-war overtones. Interestingly the thing that stands out in this movie is the wonderful relationship between Jiro and his wife Naoko Satomi. This is one film that you wouldn’t regret watching. 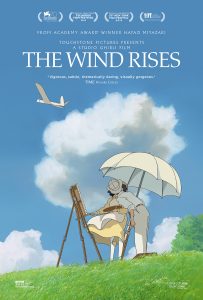 10. Into the Forest of Fireflies’ Light

In this supernatural romantic movie, a girl named Hotaru falls in love with Gin, a masked forest spirit. But the catch is that Gin would vanish as soon as he is touched by a human. Ah, love, the things you make people do. Talk about long-distance relationships! This seems worse. This heartbreaking yet beautiful movie will surely bring tears to your eyes. 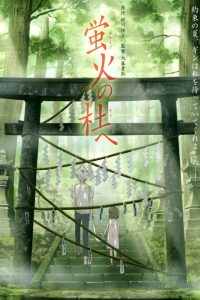 Due to the upcoming Olympic Games, the government decides to demolish an old school in order to build a new modern building in its place. In an attempt to save the old building, Umi Matsuzaki, with the help of others, helps with the renovation of the same. It is here that she meets Shun Kazama and falls in love with him. A closer look at the past reveals that Kazama is in fact Umi’s brother. How does one define love in such a situation? Watch this movie to find out. 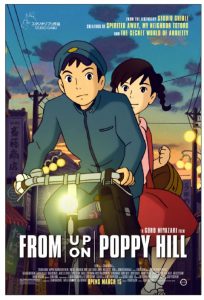 Josee, a differently-abled girl, and Tsuneo, a University student with big dreams meet each other through an accident. Tsuneo, who is working his way through college, accepts Josee’s grandmother’s proposal to become Josee’s caretaker. The story is very simple and sweet, which is exactly why it is so lovable. The characters grow beautifully, the viewer grows with them, and at the end what you have is a fully-blossomed flower garden. 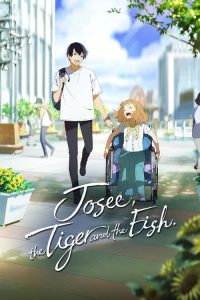 13. Voices of A Distant Star

Yet another Makoto Shinkai movie, this science fiction romantic film will surely blow your mind. It is just 25 minutes long, and in that short period of time, it has the power to move you to the point of crying. It is the year 2046, earth has been attacked by aliens. In order to retaliate against the aliens, some people are chosen. One of them is Mikako Nagamine. In the process, she gets separated from Noboru Terao but they promise to keep in touch through emails. But as the distance between the spacecraft and earth increases, the time taken for the mail to reach the other person also increases exponentially. Will their love survive in such circumstances? 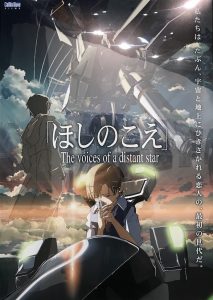 A story about redemption had never been so endearing! This movie teaches all its viewers a very important lesson, how important it is to listen to the unspoken sometimes. The literal translation of the original Japanese name of the movie is- ‘The form of the voice’. When a differently-abled girl is bullied by her classmates, tormented and distraught, she moves to another school. Years later, one of her bullies regrets his behaviour and sets out to seek forgiveness, and ends up falling in love with her. Will his voice ever reach her? You have to watch the movie to know. 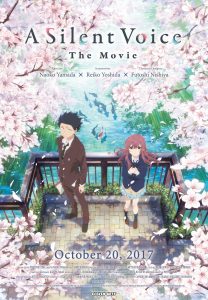 Ai ni dekiru, kotoba mado aru kai? (Is there still anything that love can do?) This question looms over the entire story. Another display of the ‘Makoto Shinkai’ brilliance, this movie is fantasy at its best. Tokyo is under the spell of a never-stopping rain. The only hope for a little while of sunshine lies with a mysterious girl named Hina who has the power to stop the rain. Hodaka, a young boy who is trying to make a living in Tokyo, falls in love with Hina. The animation is just out-of-the-world! You’ll be in awe just by how beautiful the movie looks, and more by the impact that it will have on you. Adorned with the music by Radwimps, this romantic anime film is a must-watch. 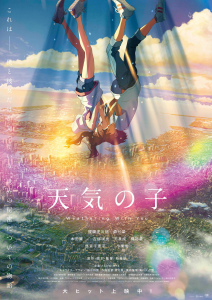 These movies are just so kawaii (that’s Japanese for cute)!!! Hope that this article has inspired and moved you enough to go and watch one of these movies right away! Are you an anime newbie? Check out our article on the best Japanese anime movies of all time to get you started!