If you are an 80s kid, you’d remember the simple joy of waking up early every Sunday morning and tuning in on DD to watch the most epic TV series ever – Mahabharata. And if you aren’t an 80s kid and have no clue what we are talking about, think Game of Thrones, but only a gazillion times more awesome and with way better plot. Now imagine if Mahabharata was to be made into a Bollywood movie.

We bet you’ll agree that it would be bigger and better than anything you’d have ever seen! And since SS Rajamouli of Baahubali fame has already announced that he’ll be directing the magnum opus (thank God!), here’s the list of stars who we think should make the cut and be cast in the legendary saga. 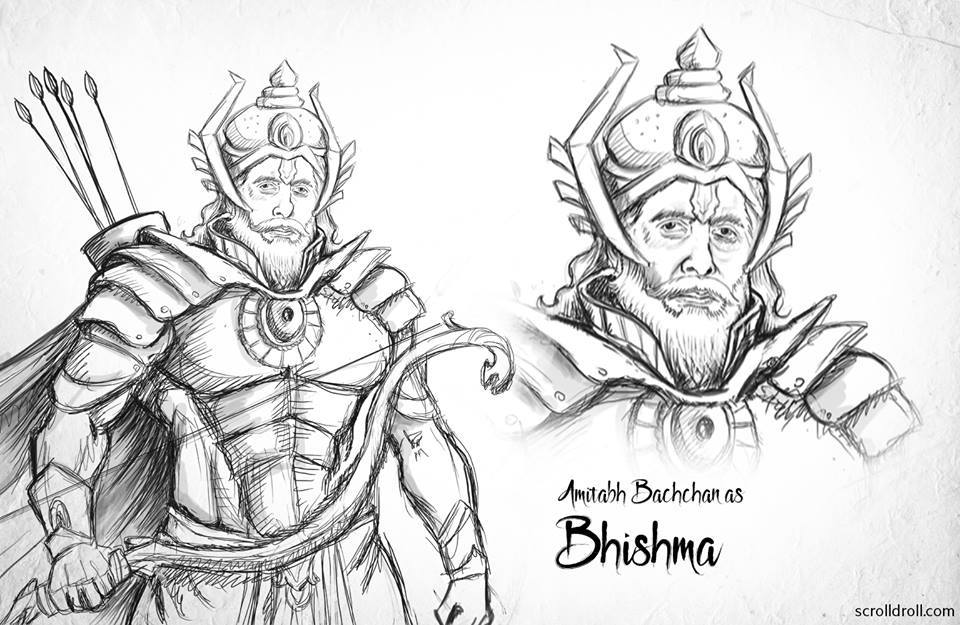 Big B is the most natural fit for this role. The grand-uncle of both the Pandavas and the Kauravas, Bhishma was a mighty warrior blessed with wish-long life. He was also indisputably one of the best archers extraordinaire in the mythological epic. With his big voice and bigger personality, the senior  Bachchan would be perfect as Bhishma. 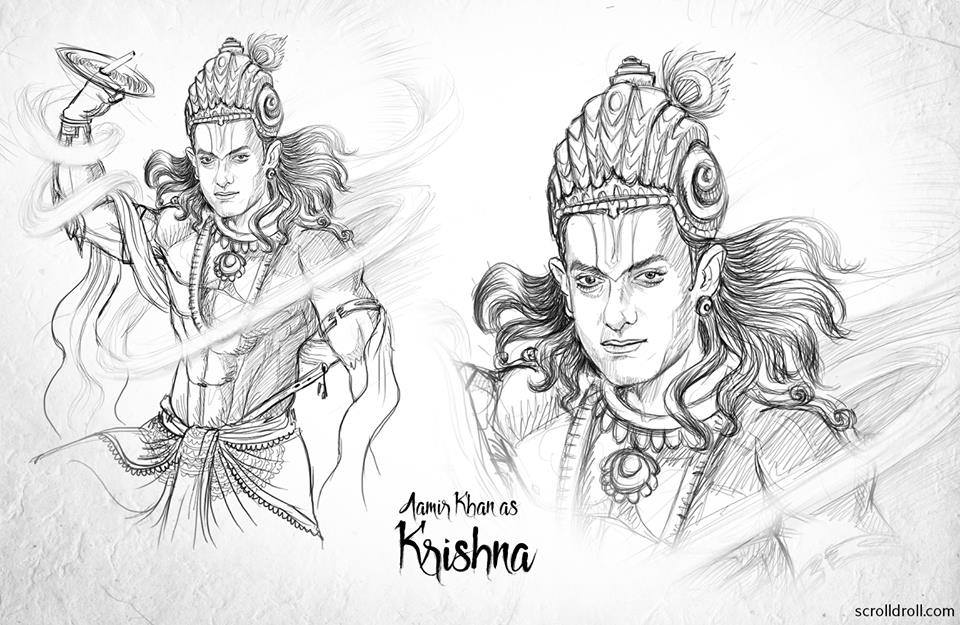 In Mahabharata, when the Kauravas and the Pandavas were fighting, Lord Krishna became the
mediator. Now, we don’t know about you, but we think Amir with his pleasing personality and socially conscious image, seems apt for this role. His playful smile and boyish charm is reminiscent of how the legend of Mahabharata describes Lord Krishna. And since it is already rumoured that he’s on-board SS Rajamouli’s movie adaptation of the saga, we are keeping our fingers crossed that he is cast in this role. 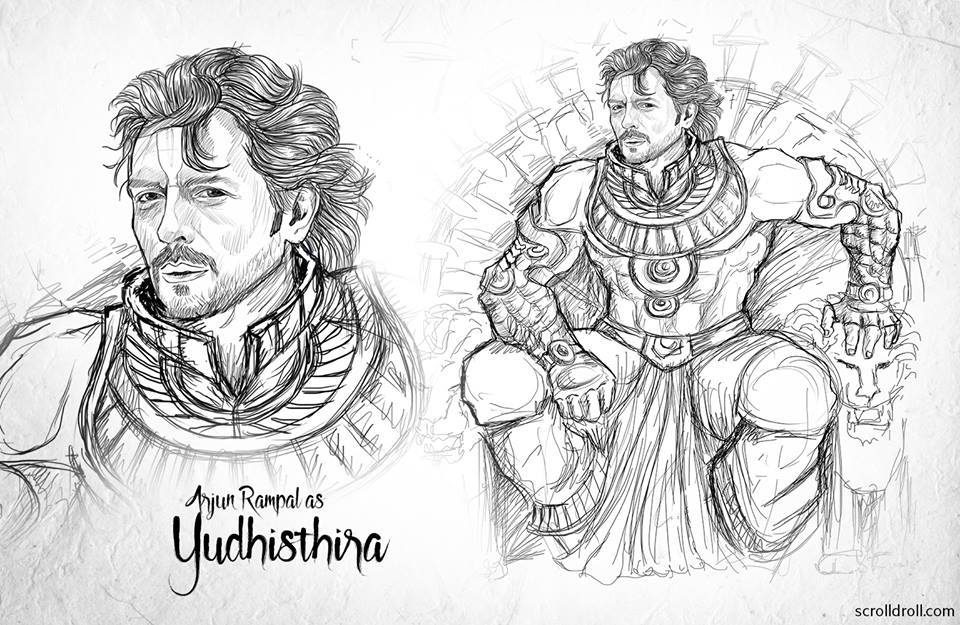 We swear that we didn’t pick Arjun only for his great looks and chiselled physique for this role. The model-turned- actor has earned a lot of following for his acting chops and we are sure he will do justice as the tall, strong and humble Pandava king. Mahabharata describes the eldest Pandava as a righteous leader with sage like qualities, and we feel Arjun will live up to the character with his quiet confidence and calm personality. 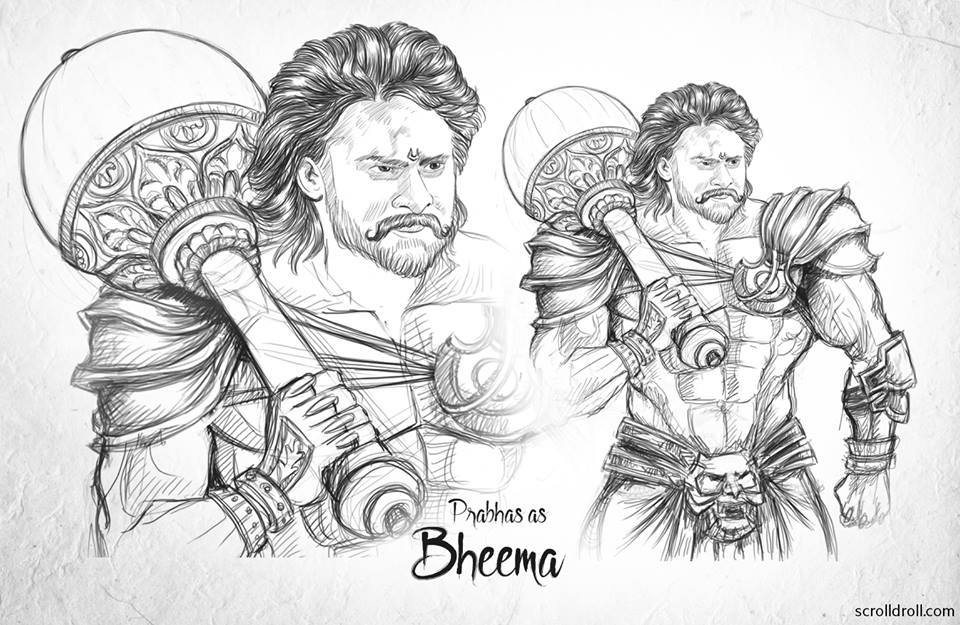 If you’ve seen Baahubali, you will totally agree that Prabhas is going to be awesome as the fierce warrior with the towering strength of a thousand elephants. He has the body and the temper to make the powerful role come to life. We can totally imagine him giving Kauravas a run for their money as the mighty Bheema. 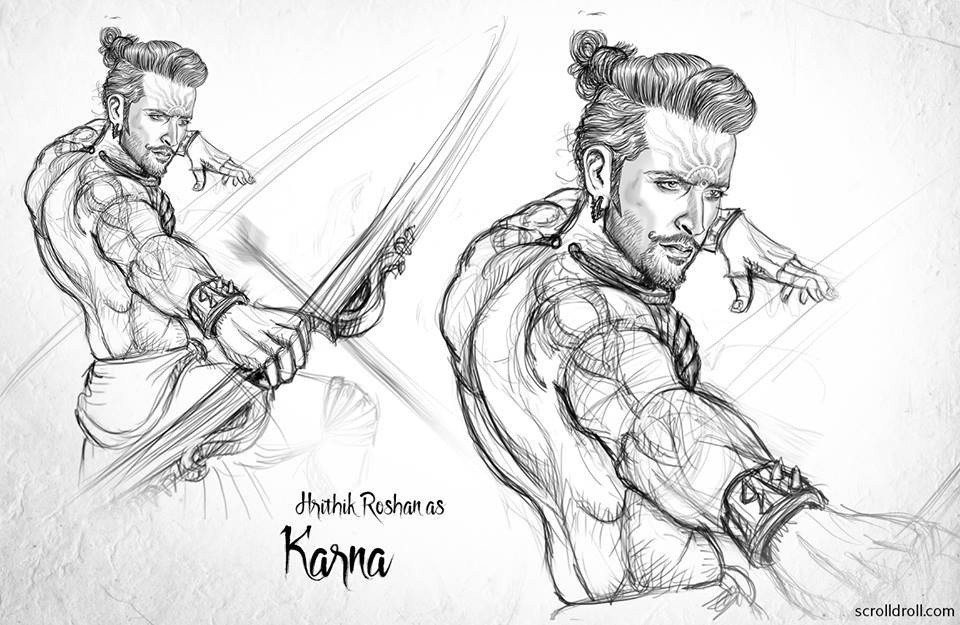 The Greek God of Bollywood with looks that can kill will be so right as Karna. With his fighter’s physique and brooding eyes, Hrithik will do a great job in bringing the misunderstood heroic warrior’s character to life. Karna was probably one of the greatest and most powerful warriors in the legend of Mahabharata, only defeated by deceit and not skill. And therefore, Hrithik’s battle scene fighting the Bollywood actor who plays Arjuna will be no short of epic. Wondering who plays Arjuna? 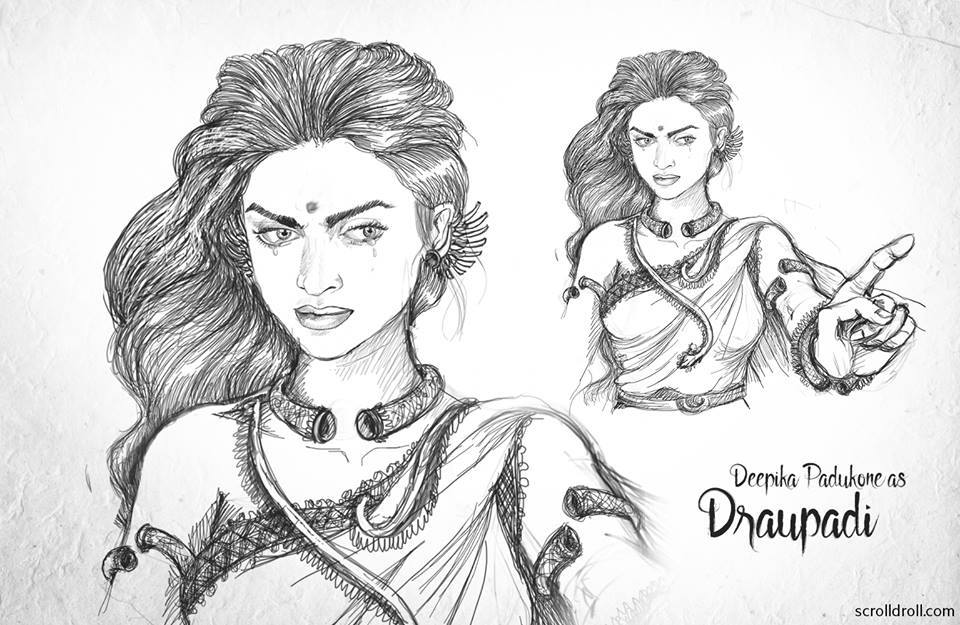 Some may think Draupadi was a damsel in distress, but if you read Mahabharata carefully (or at least watch the show like we did), then you’d realise that she was actually pretty fierce. She was in fact one of the most important characters in Mahabharata and probably one of the strongest female personas in any mythological tale ever. And Deepika embodies fierce (remember her response to all the haters?). The dusky fearless beauty has everything it takes to play the brave character. 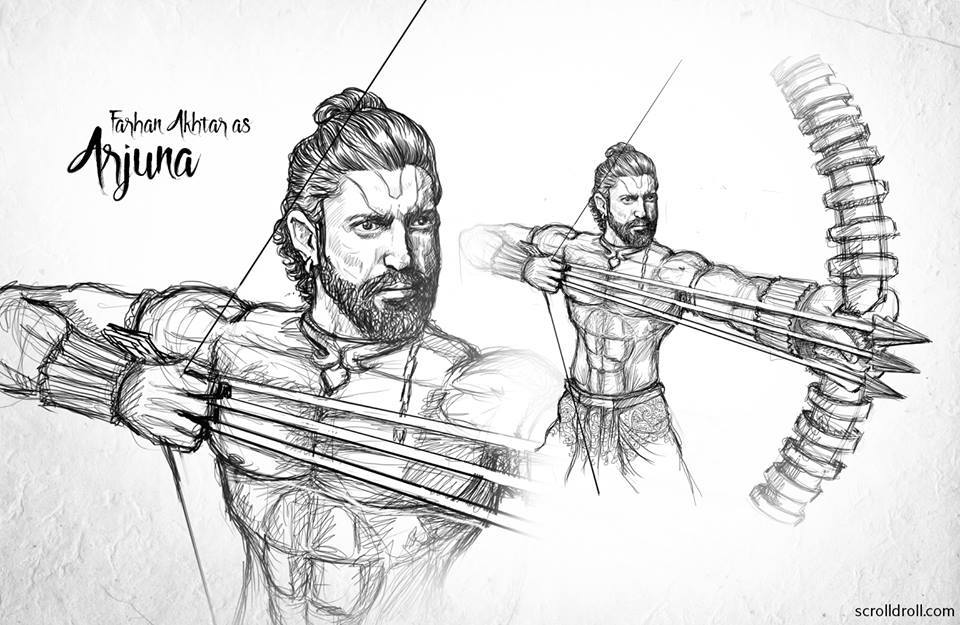 We were blown away by Farhan’s physical transformation for Bhaag Milkha Bhaag. The man really trained like a beast for the movie and we think he will totally rock (on) as Arjuna, the unparalleled archer who was the bearer of the fabled Gandiva. Arjuna was more than just a warrior. He was also an accomplished performer with a charismatic personality, just like our multi-faceted Farhan. 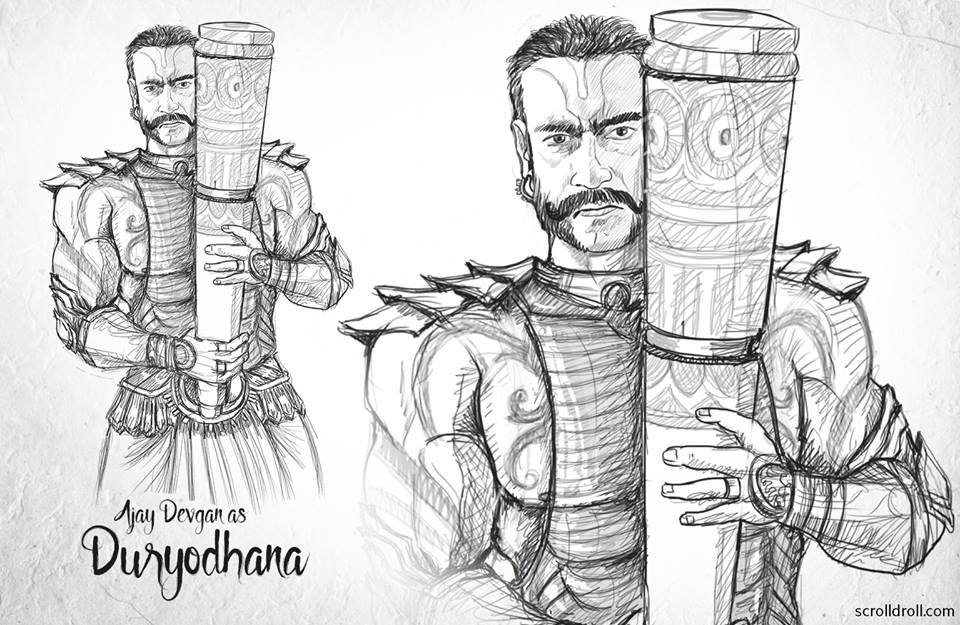 Ajay might be best remembered as the good cop in Singham, but he has plenty of experience playing a man on the wrong side of the law (remember Company?). And that’s why he will be awesome as Yudhishthira’s nemesis, we think. Duryodhana, if you’d recall, was the perfect anti-hero with a
penchant for mace fighting. Our very own Ajay will do a great job as the despicable eldest Kaurava. 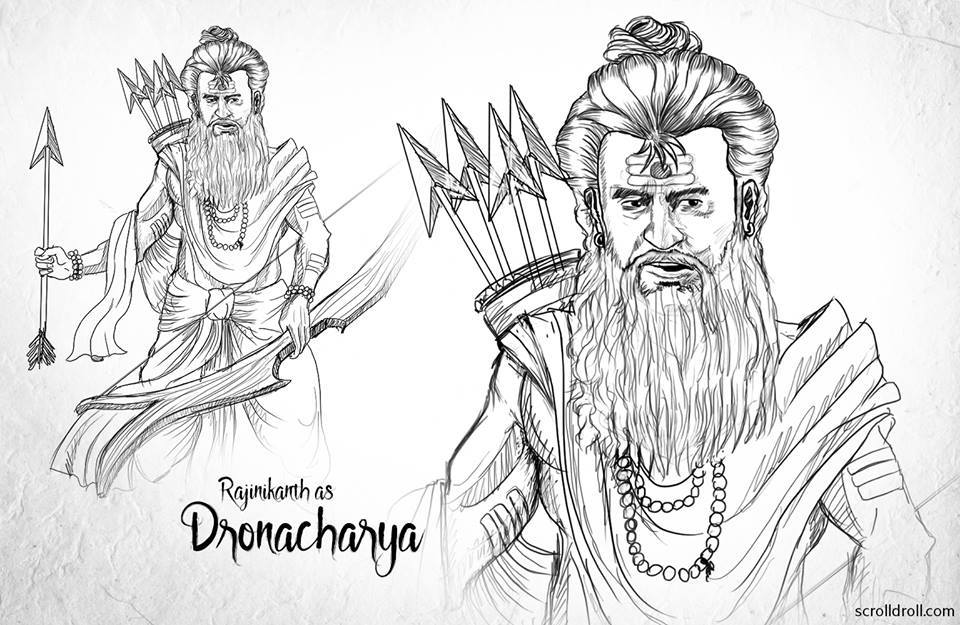 Because he is the ultimate Thalaiva. He will be perfect to play the ultimate mentor – Guru
Dronacharya. Drona was a master of some gravity defying weapons, just like Rajnikanth in his
movies. Don’t know what we are talking about? Besides, who can play the complex
character of a Guru torn between his love for his favourite pupils and the call of duty? 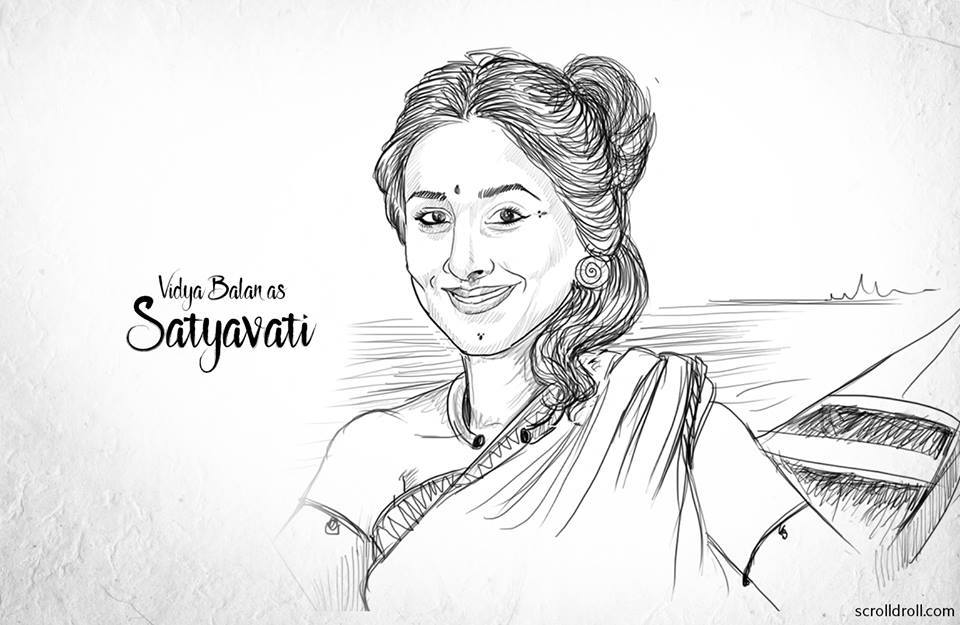 Vidya will be perfect in the small but significant role of Satyavati, the queen of the Kuru king
Shantanu of Hastinapur and the great-grandmother of the Pandavas and Kauravas. Satyavati was
known to be wise, honest, trustworthy, and faithful with the kingdom’s best interest at heart, just
like Vidya who through the Clean India campaign is trying to make India better. 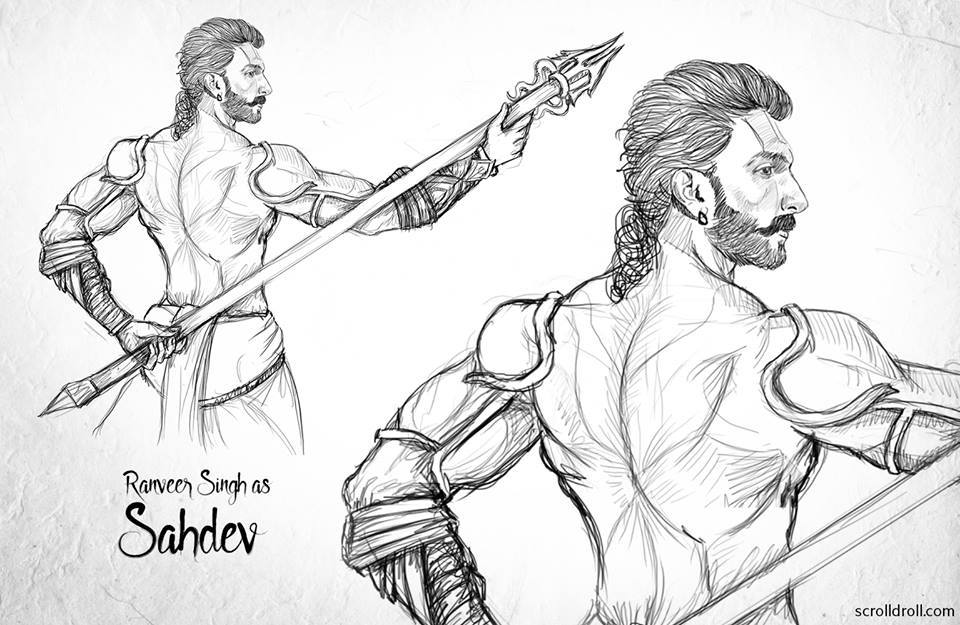 How can our cast of the most epic Mahabharata ever be complete without the reigning prince of Bollywood himself – Ranveer Singh? We think our Rambo will ace as the youngest Pandava – Sahdev. He may have been young and might even seem insignificant compared to other more popular characters in the monumental epic, but in reality he was an ace swordsman who defeated 40 Kauravas all at once (whoa!) and truly an integral personality in the saga. 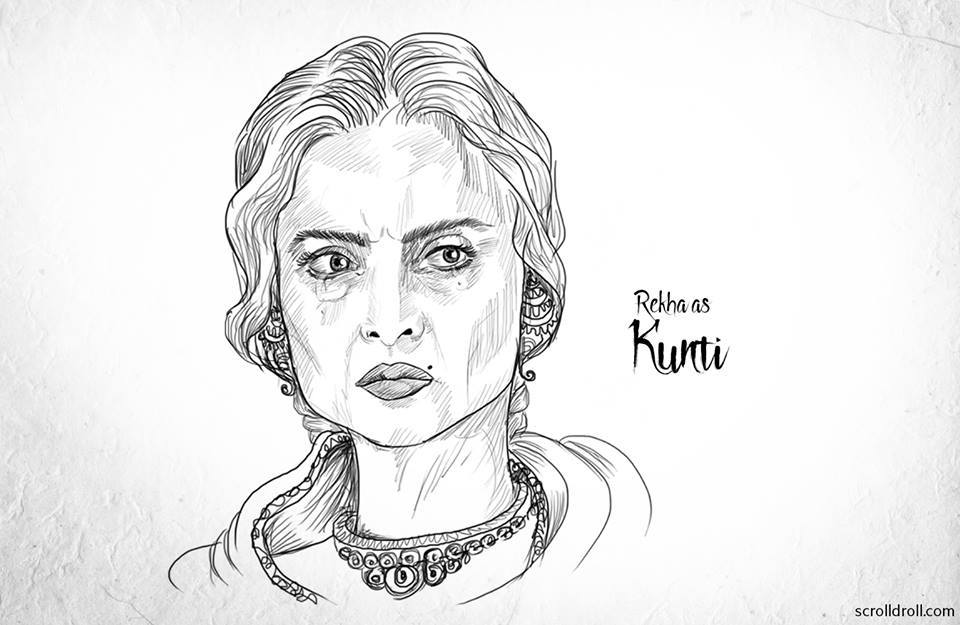 Kunti, along with the fierce Draupadi, is considered the female protagonist of Mahabharata. She is described as a beautiful yet assertive woman who in a way shaped the entire course of dynastic destiny in the Mahabharata. After mothering Karna, she chooses the scion of Hastinapura, Pandu, to wed, and becomes the mother of the epic’s heroes: the Pandavas. The reclusive beauty Rekha, who was once known to be the boldest actress of her times and is living her life at her own terms, will be the perfect pick to play this complicated role. 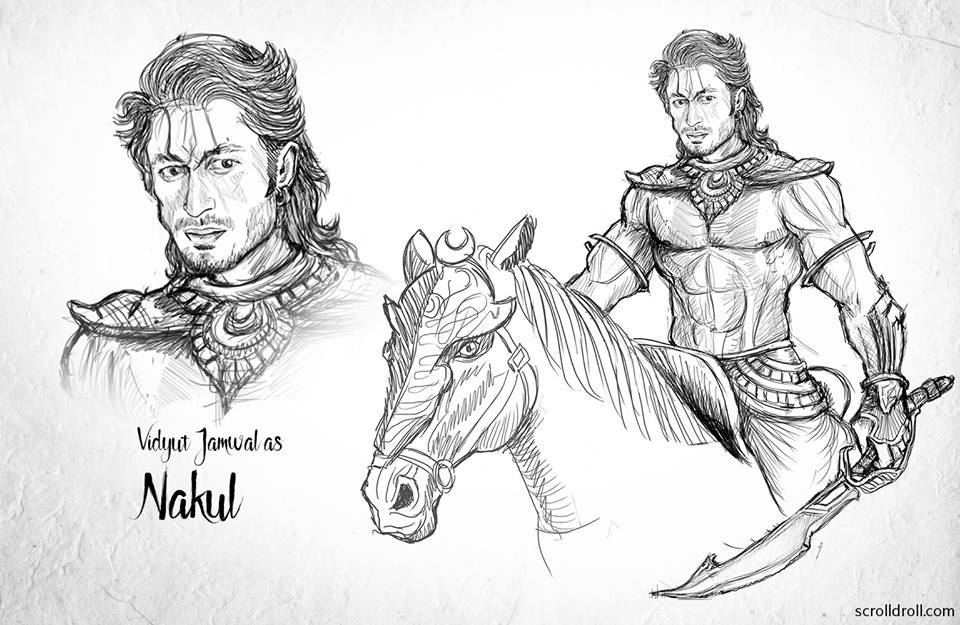 We’ll be honest. We haven’t seen any of Vidyut’s movies to tell if he’s any good as an actor. But with his rock solid abs and fetching looks, he seems to be the right candidate to play the most handsome man in the Kuru lineage known for his sword fighting skills and diplomacy. 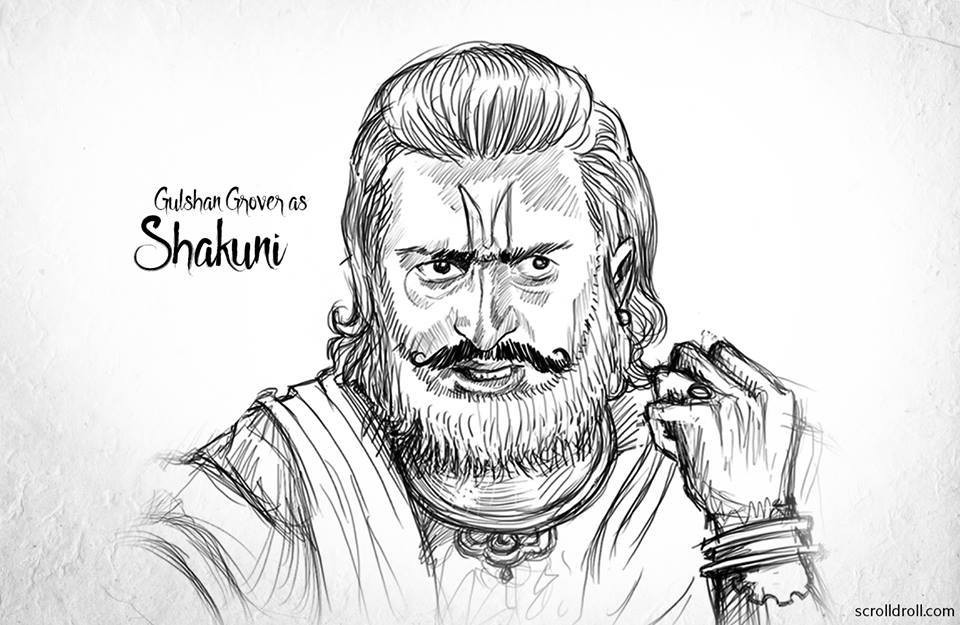 Who can play Mahabharata’s bad man better than Bollywood’s bad man himself – Gulshan Grover? He will be menacingly awesome as the conniving mama who was the lead conspirator of
Mahabharata and the mastermind behind the devastating war. 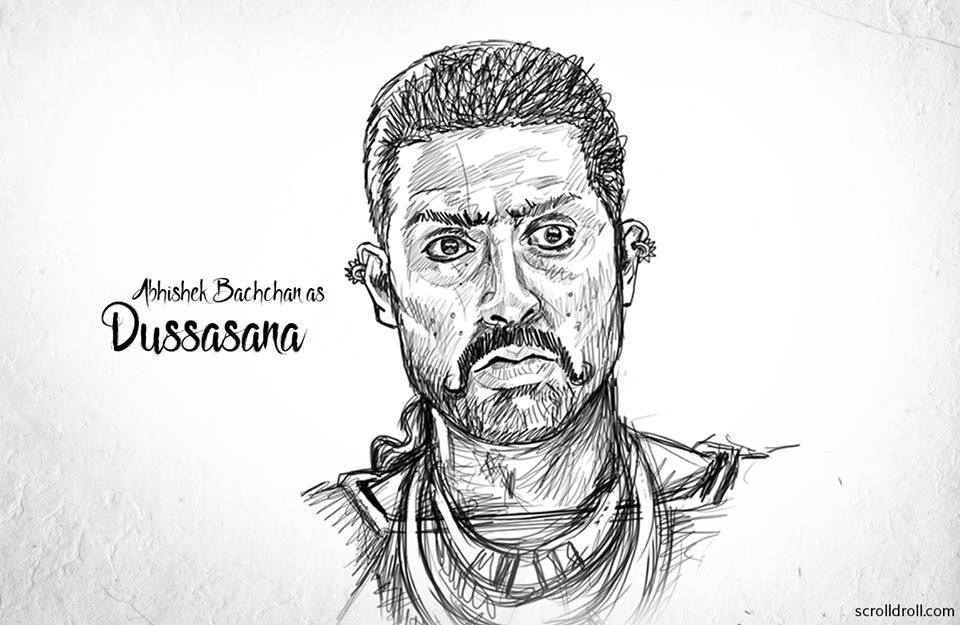 Dussasana has to be among the most hated character in Mahabharata, dragging Draupadi by her
hair into the assembly at the behest of his equally evil elder brother, and outraging her modesty. We feel Junior Bachchan who has proven his mettle playing the antagonist (remember his epic
performance in Raavan?) will be the right fit for this vile role.

Aishwarya as Ganga and Kamal Haasan as Shantanu 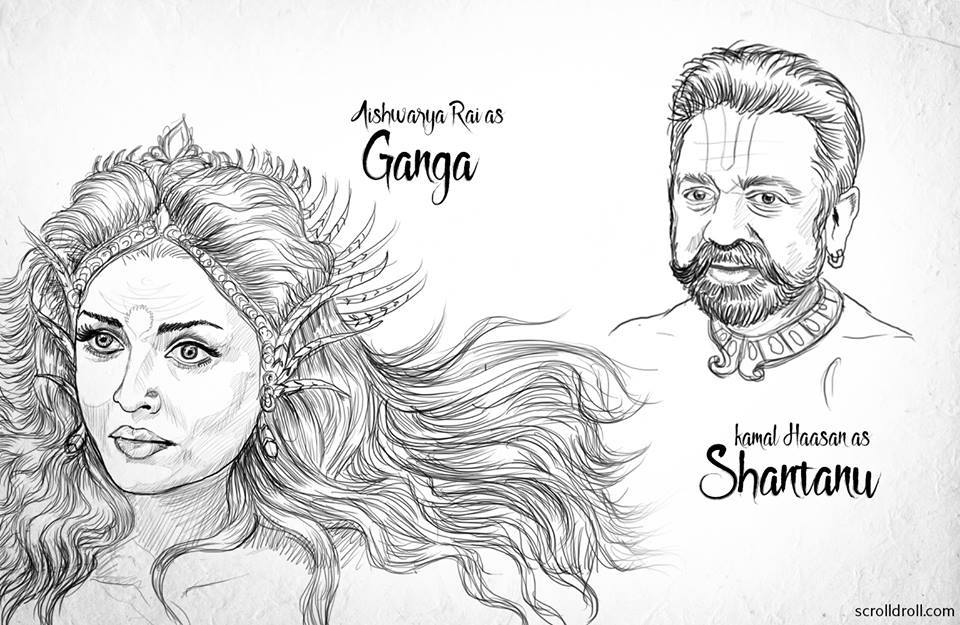 Aishwarya as the mysterious and drop dead gorgeous Ganga, and Kamal Haasan as the king enamoured with her beauty will make the perfect pair according to us. Together, they will be awesome at weaving the ill-fated love story which ended with the birth of Bhishma.

So, are you satisfied with our choice of characters for mahabharat, do tell us in the comment section  below.

If you loved these depictions, you would also love The Most Epic Bollywood Ramayana Star Cast Ever! 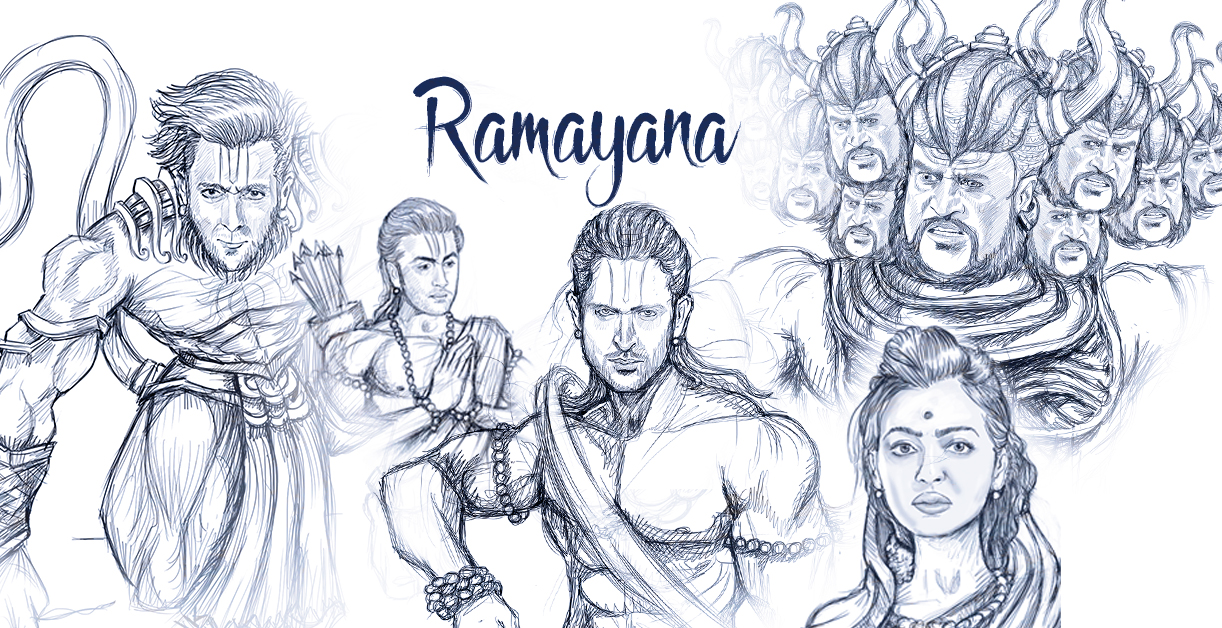 20 Best Meme Templates from Bollywood Songs That are Relatable AF