16 Powerful Quotes & Dialogues From The Godfather

The Godfather, a cinematic masterpiece, is probably one of the films whose dialogues everyone has used at some point in life. One of the few mafia films they’ve done so well, The Godfather is equal parts tragic, satisfying, operatic and intimidating with the central theme being, family. The trilogy has portrayed so many great moments with meaningful dialogues by an amazing principal cast – Al Pacino, Marlon Brando and Diane Keaton to name a few.

We bring you 16 powerful Godfather quotes  and suggest you keep them handy for the Badassery-refill.

1. Don Corleone slayed it, at giving life-advice especially to his children. 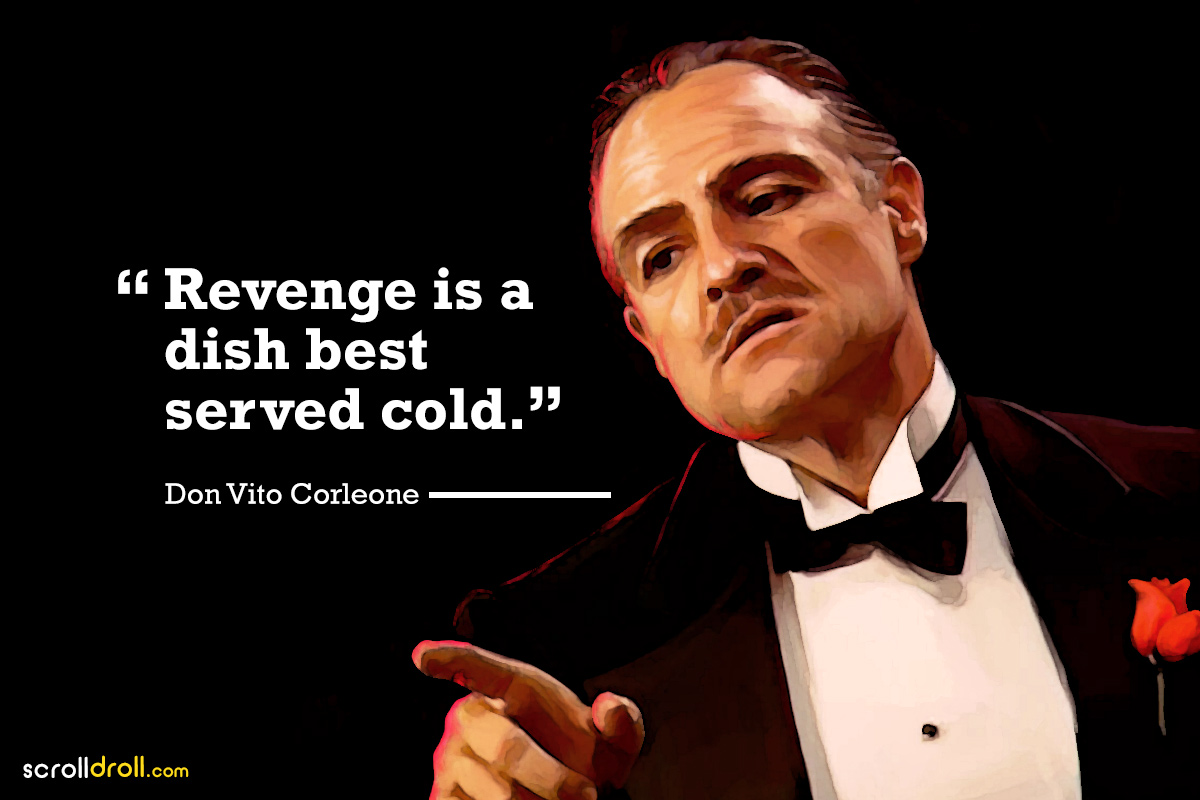 2. Providing for friends when he was least expected, that’s how Don Corleone built friendships for life. As for the enemies, they were always underprepared for the underselling Don Vito. 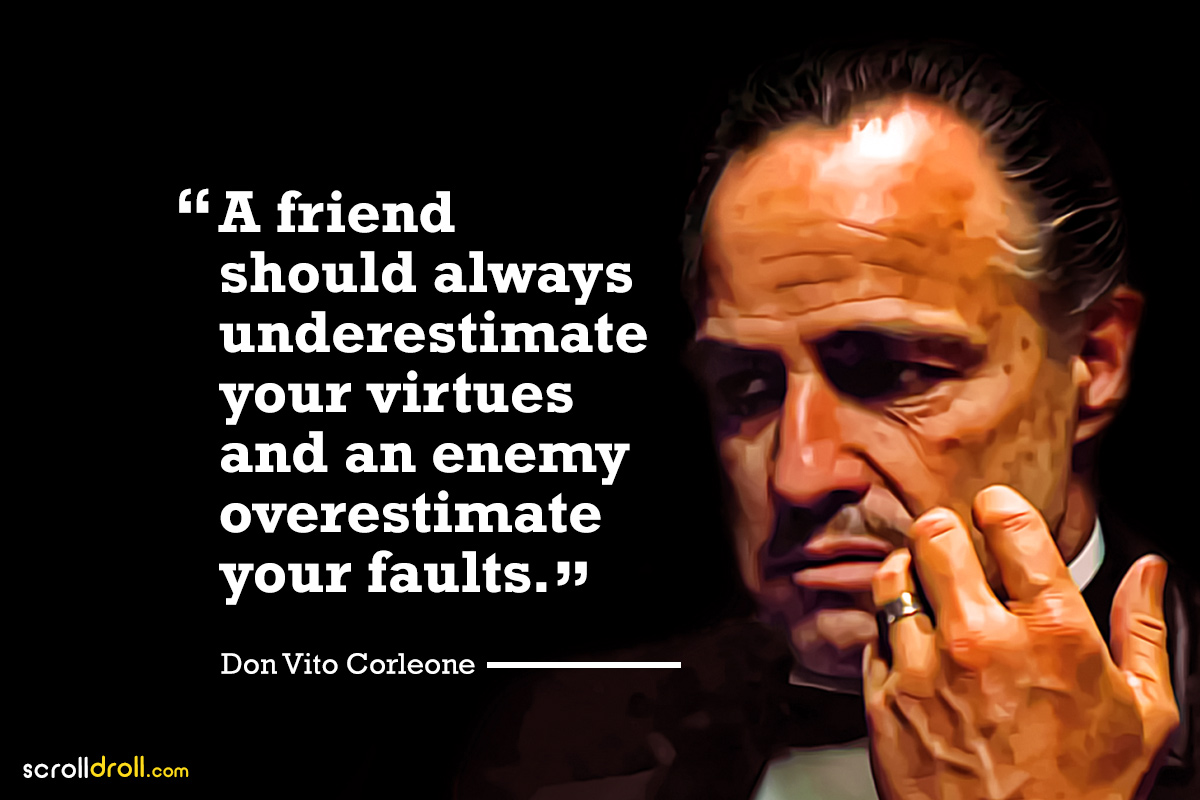 3. Coming from the guy who transformed a family-run old school mafia to a criminal empire, it just proves that cowards are comforted with lies. 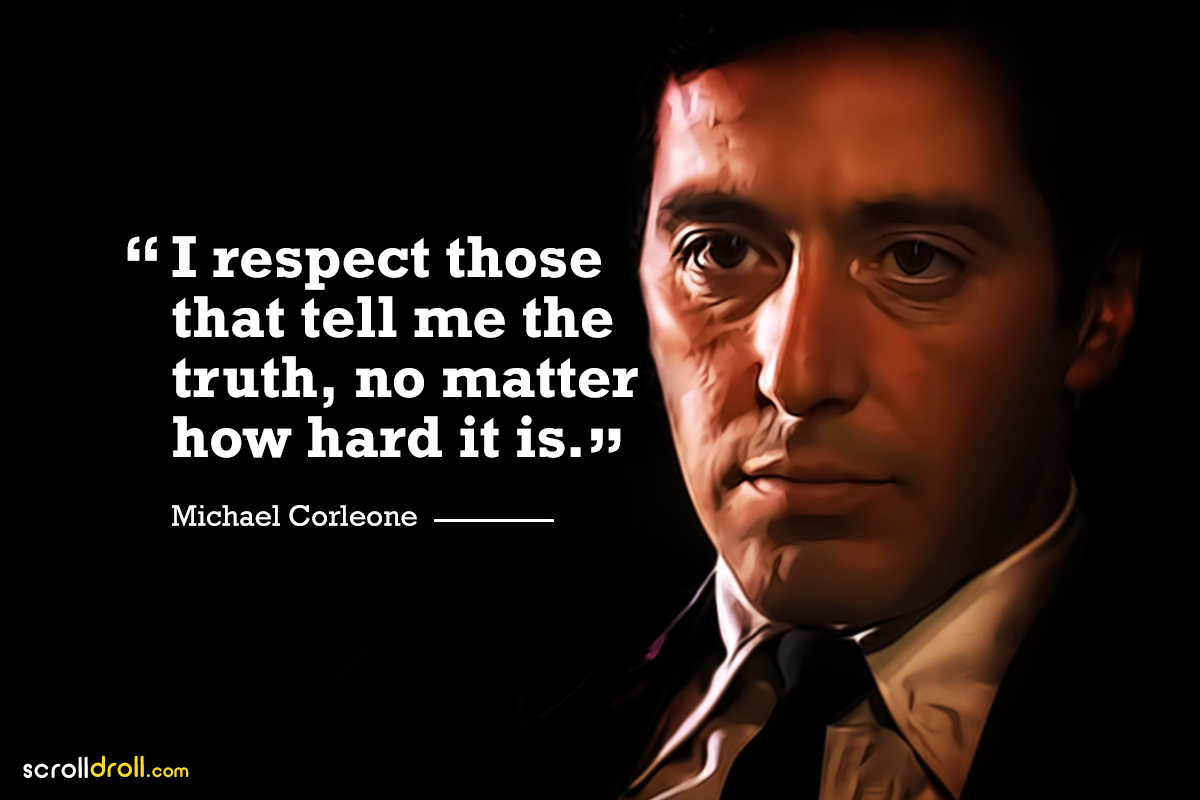 4. Cause the streets are uninviting, unorganized, unbiased but accepting and real. Some life lessons, no classroom can teach… 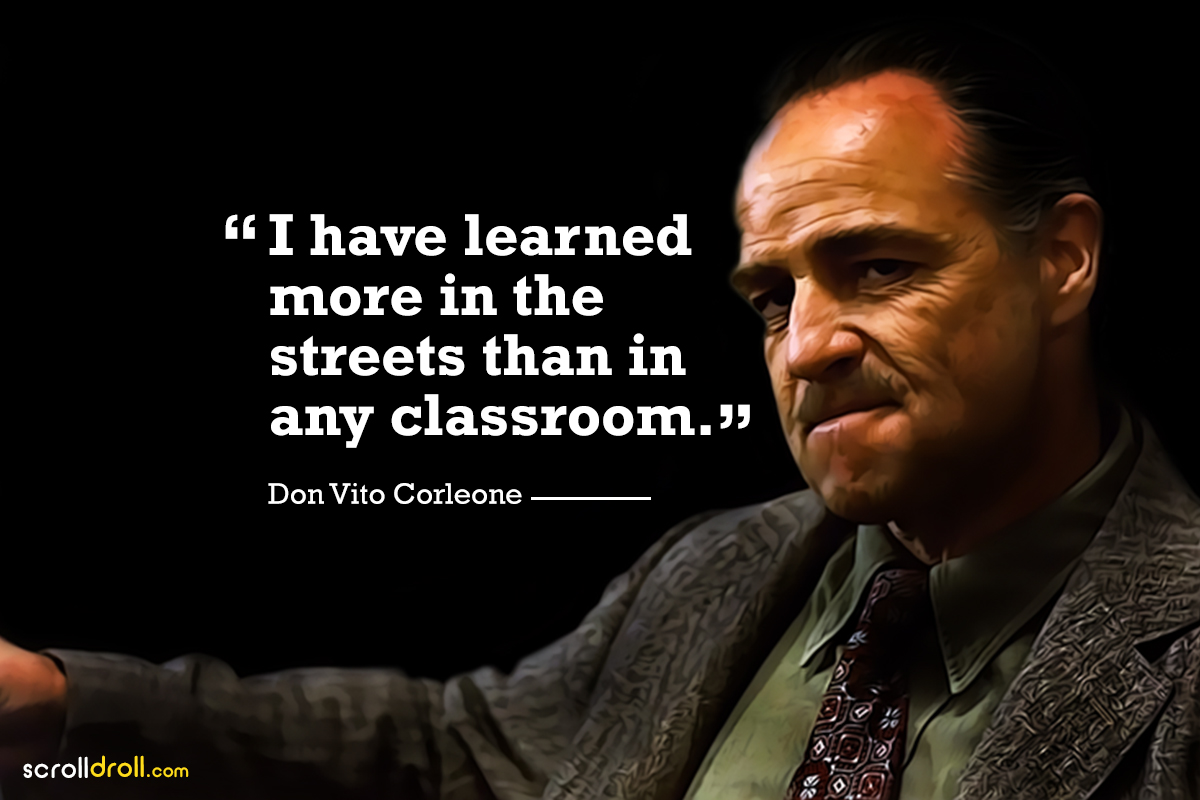 5. Unlike his father, Michael’s endeavors were selfish. In this man-eat-man world, if you gotta survive, you’ve got to bend some rules, be a little selfish and steal some bikes… 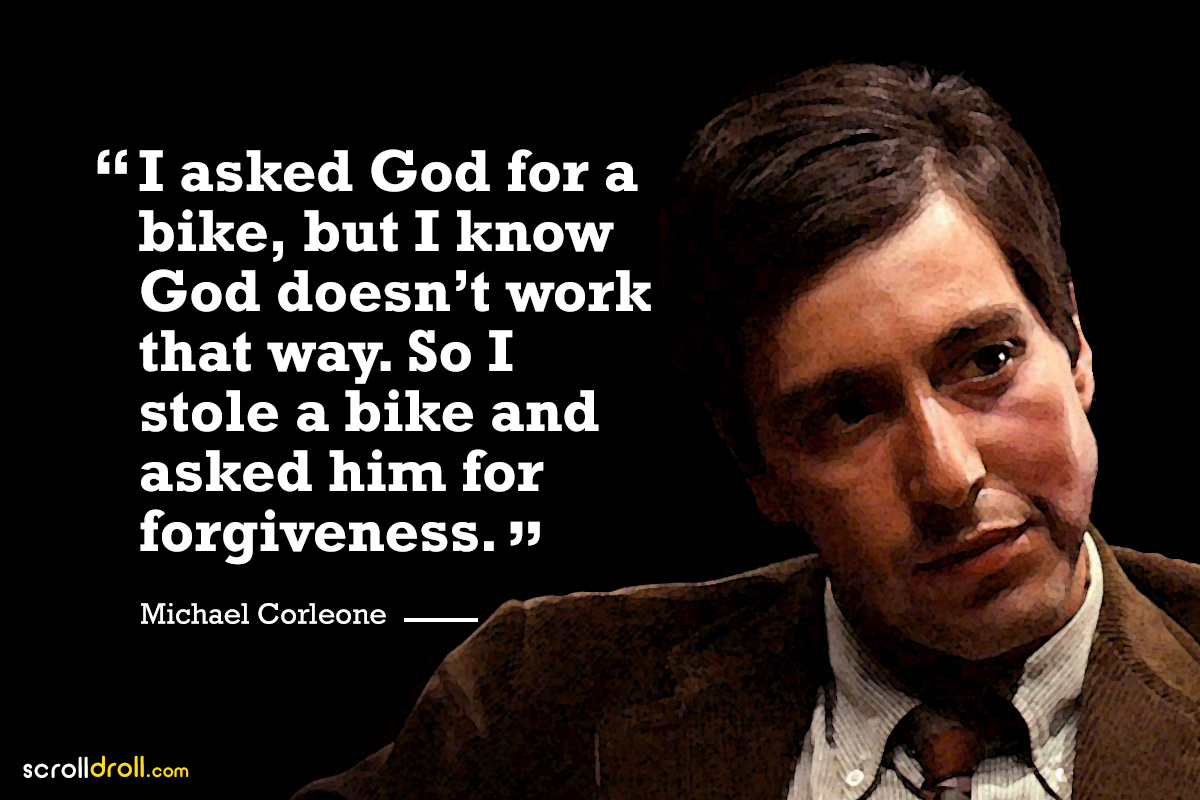 6. Unlike your family, you choose your friends. And with those friends by your side, you can build powerful empires just like Vito Corleone. 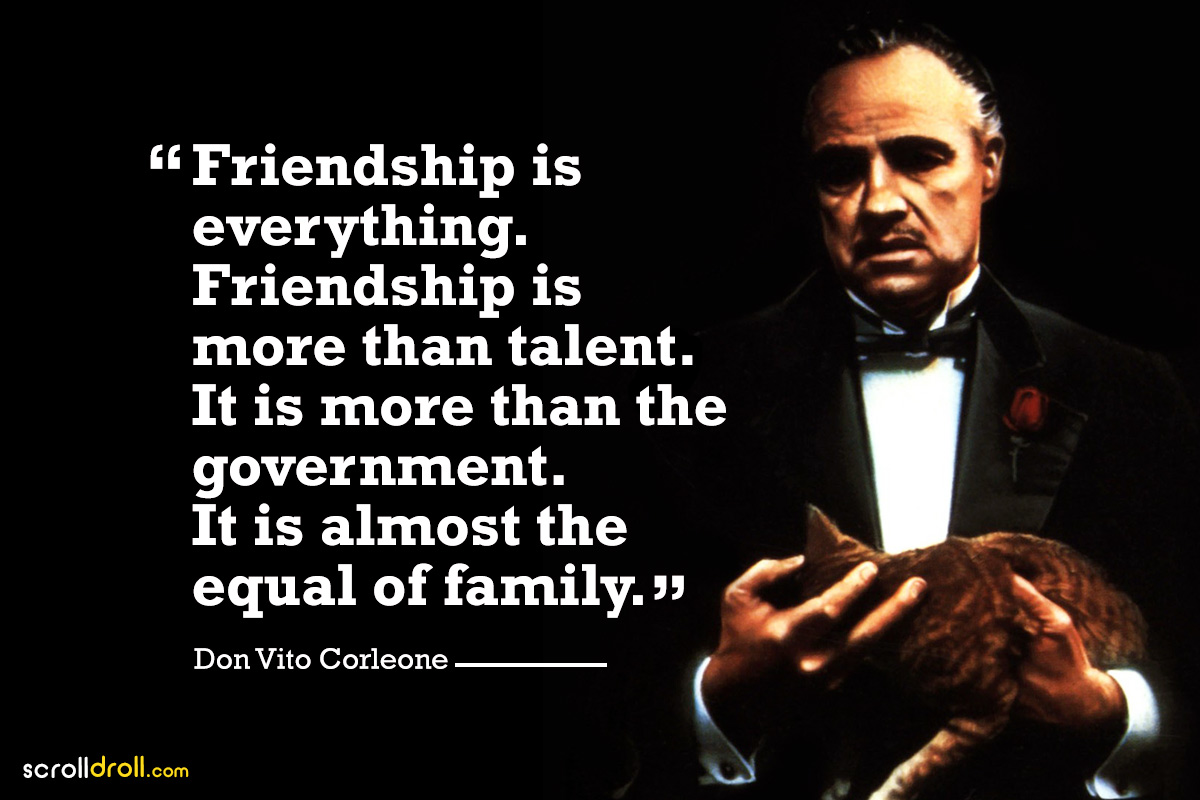 7. Stealth mode until you execute. Since you can’t make a reputation with what you were GOING to do. 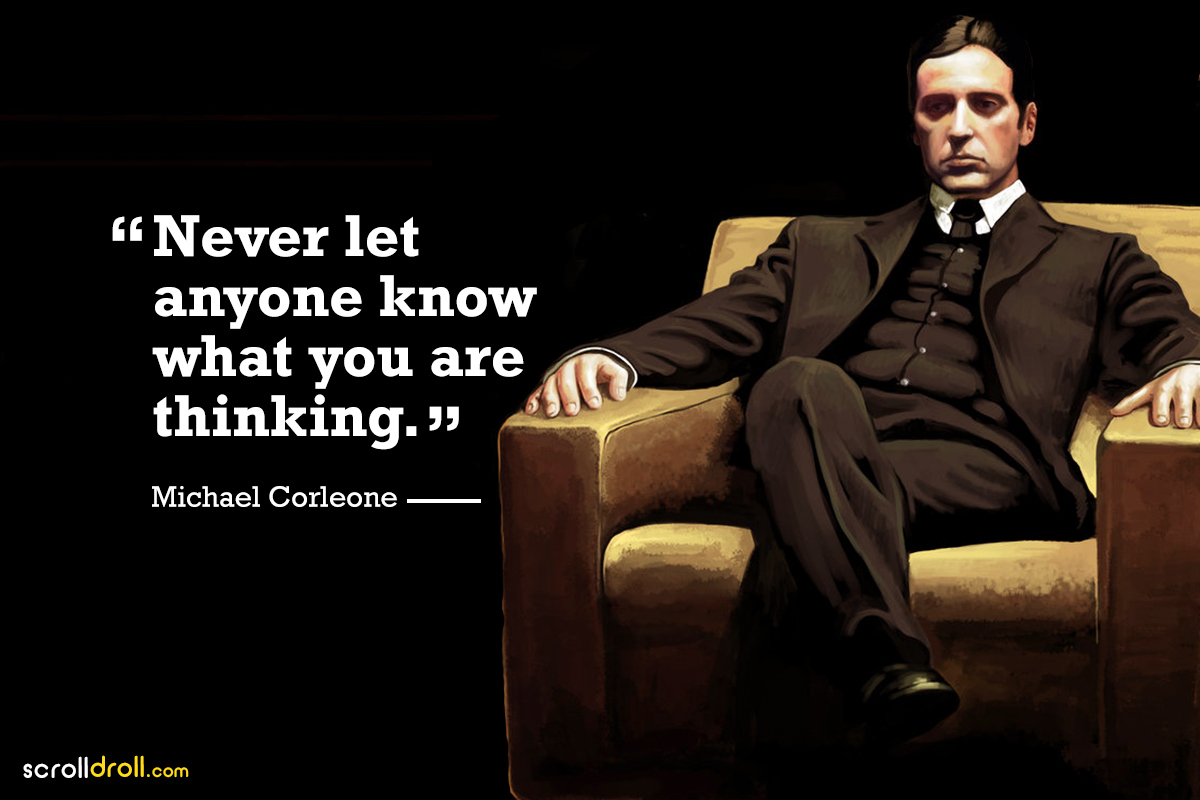 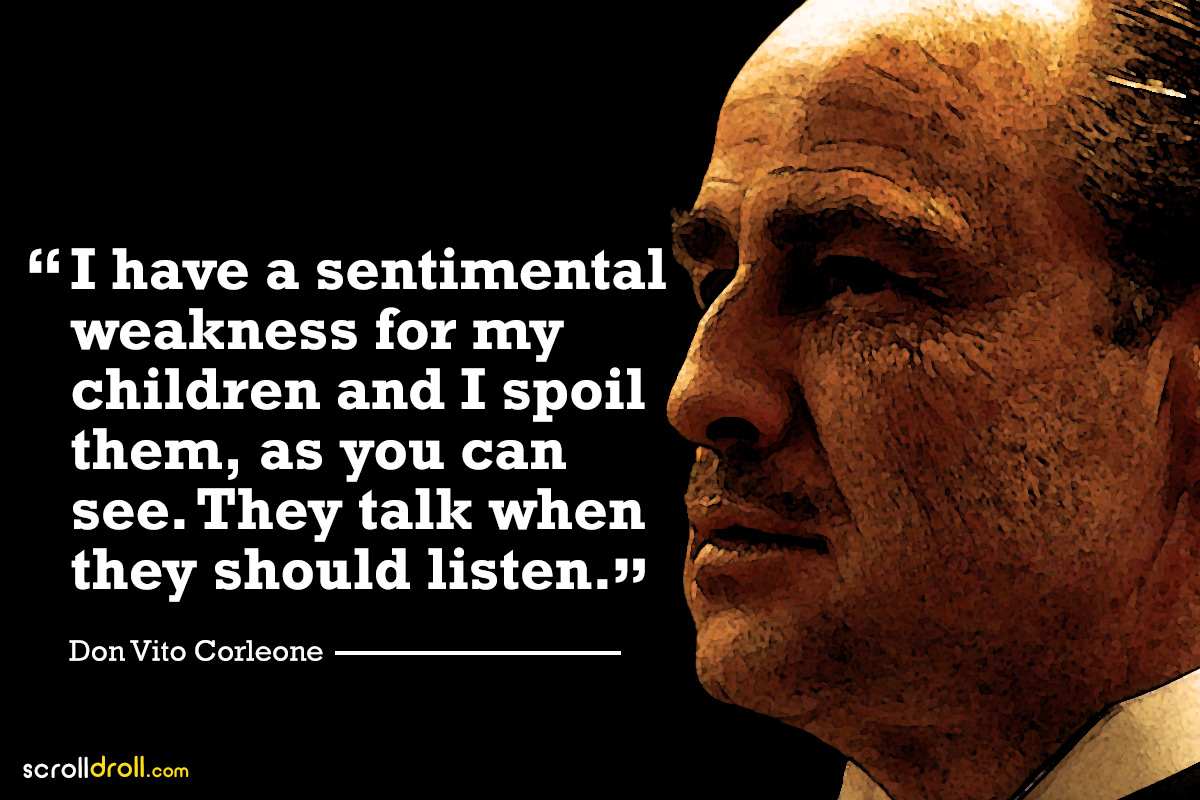 9. Virgil Sollozzo is a shrewd businessman. Sollozzo keeps his expenses minimal. Be like Sollozzo. 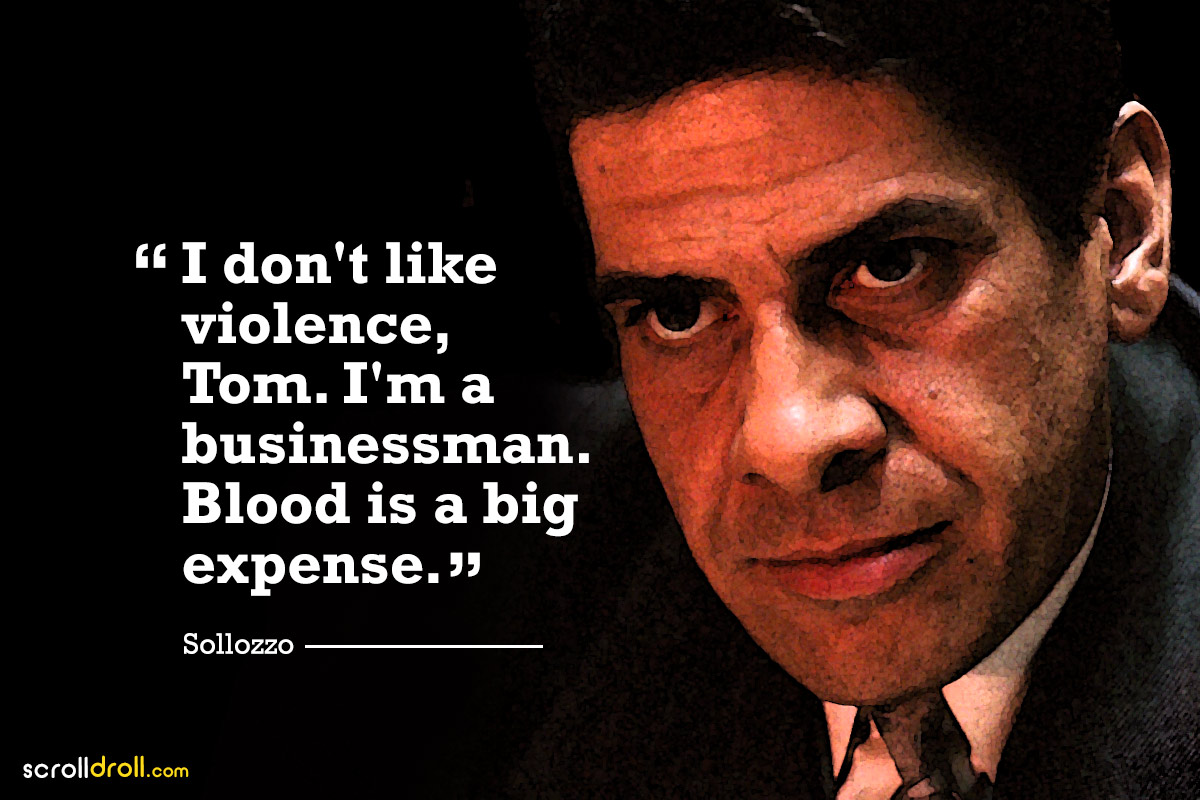 10. Establishing authority in a conversation with friends, no biggie for Micheal. 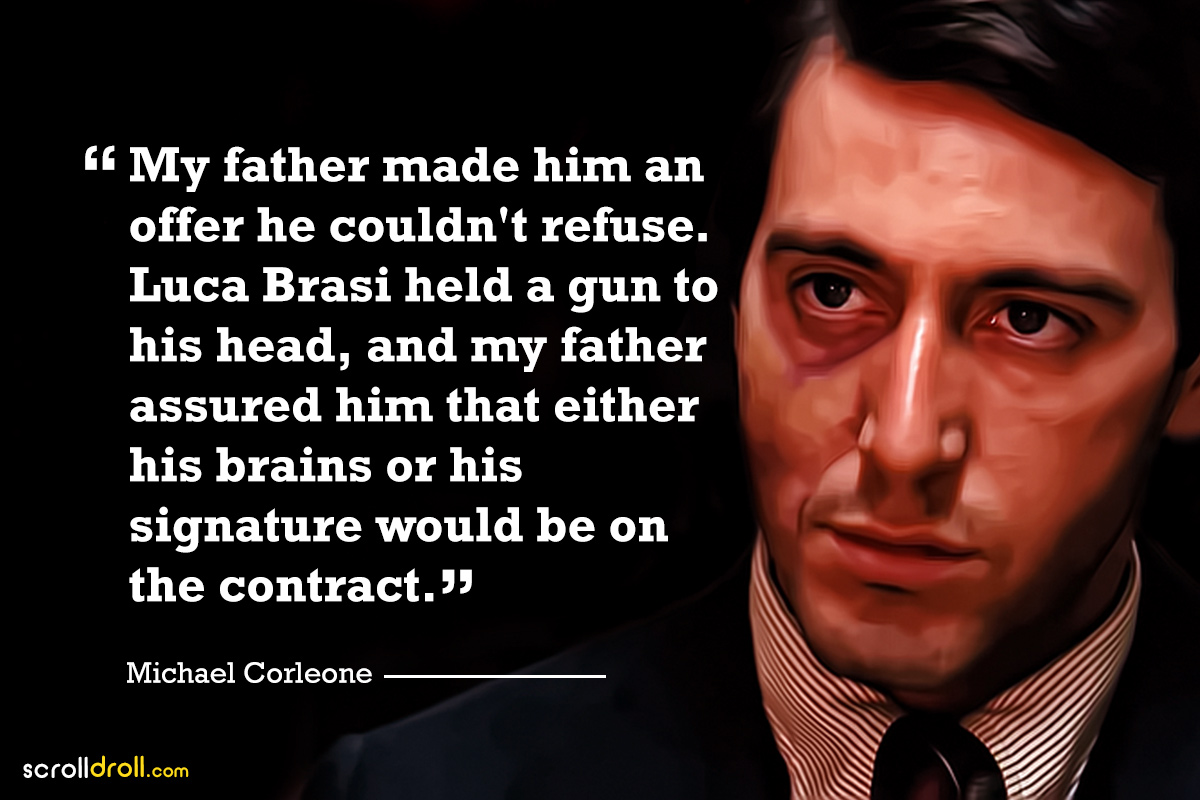 11. Whatever we do, we do for family. For the unconditional love, only they can provide. 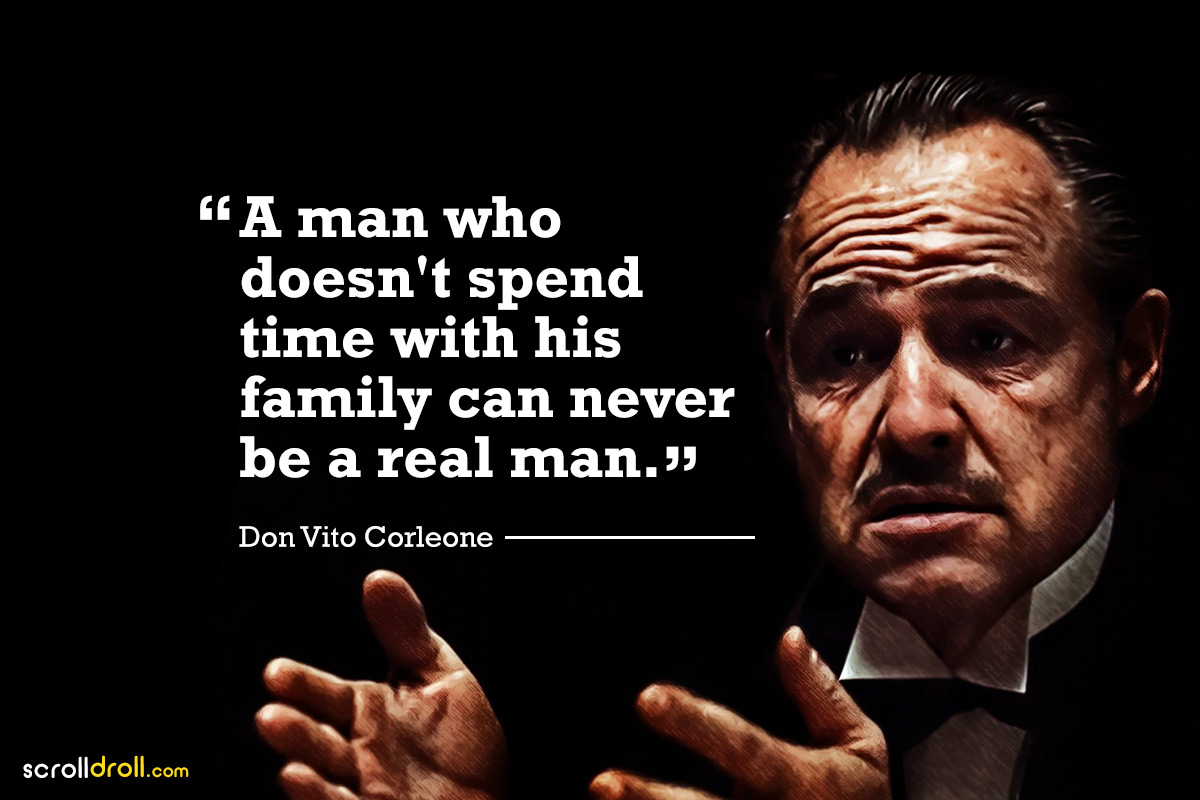 12. Vito Corleone’s greatness has stood the test of time. Be it, family, business, allies, enemies or even the government, Vito knew his way around everything. Don Vito Corleone-Greatness- Checklist, it’s a thing! 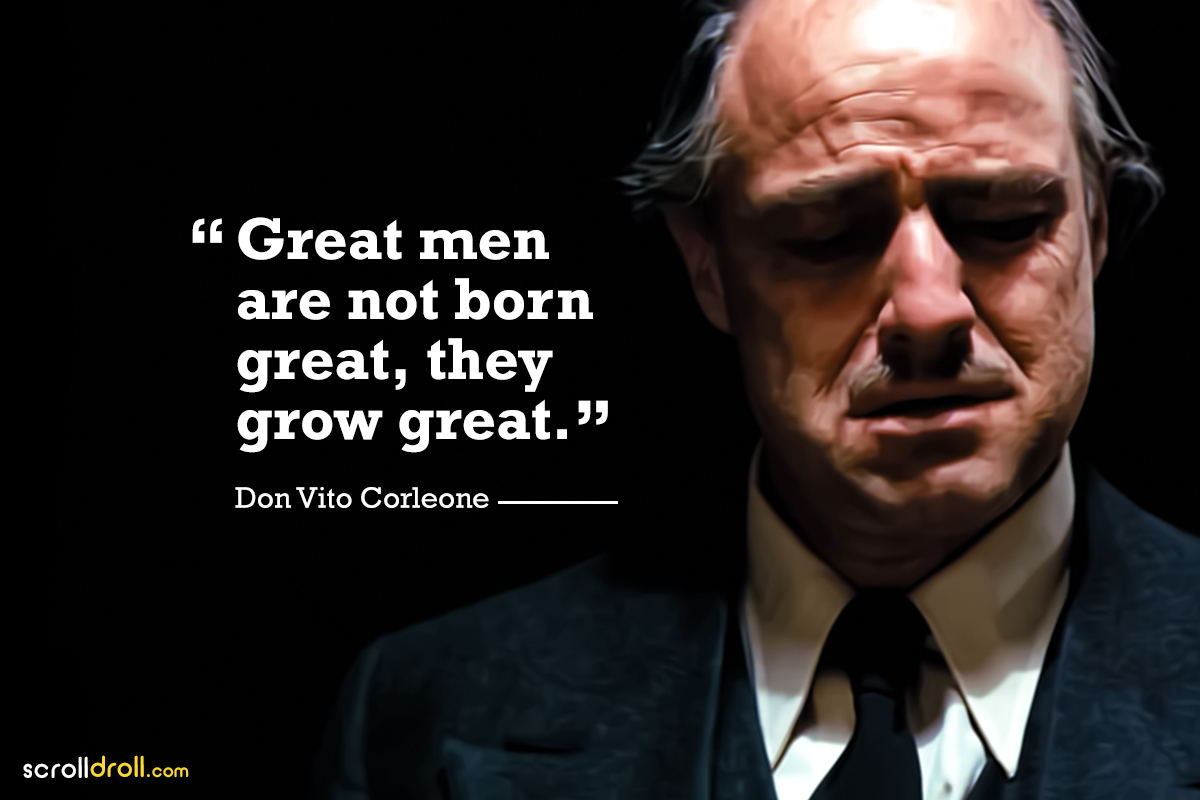 13. Yes, do that but be watchful and don’t underestimate. 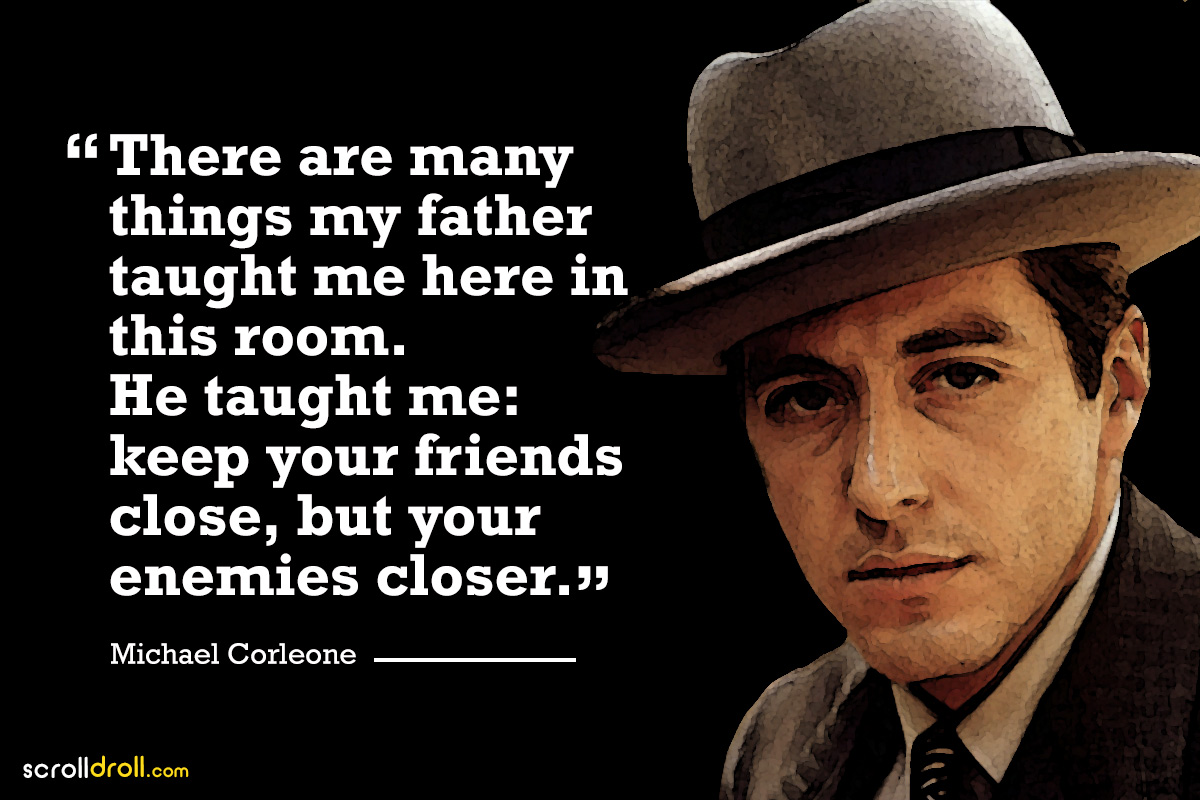 14. Badass and blunt, though a little patriarchal… 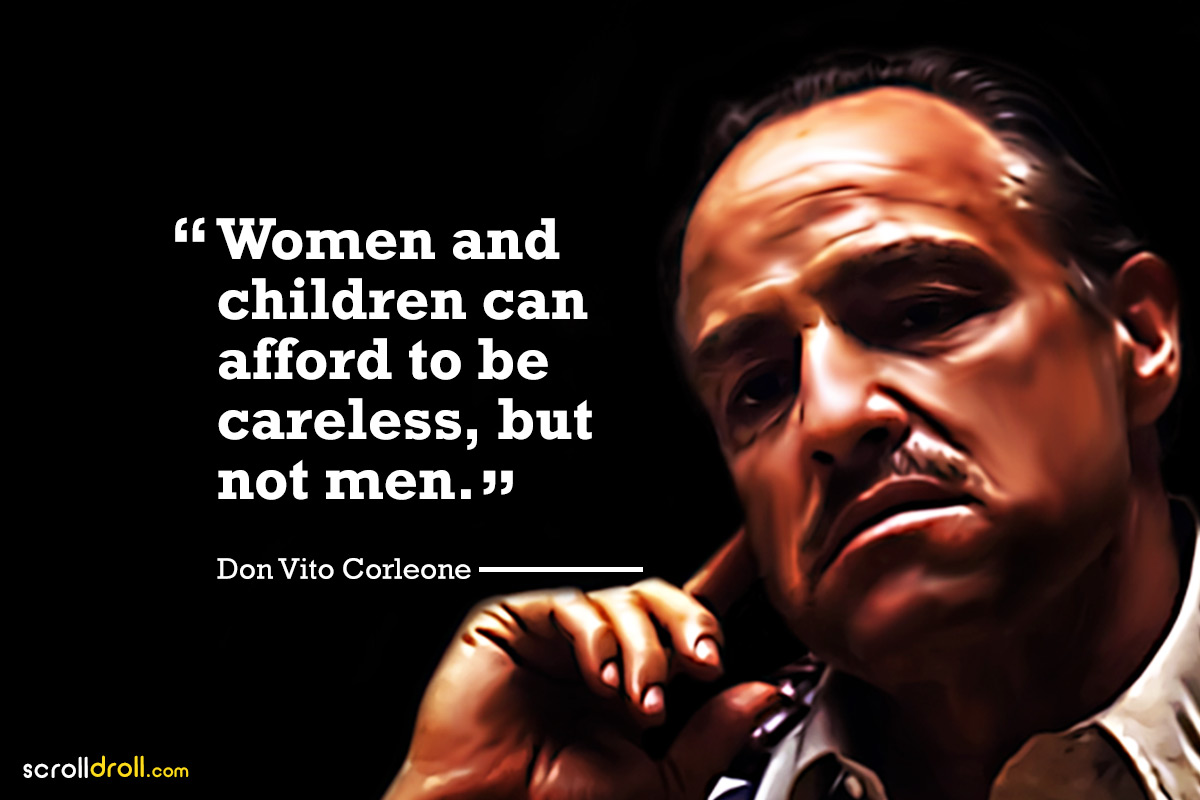 15. Don Vito did right by his family all his life. Even during the changing modern times, where neither his fair play nor his old-school courtliness worked, he never sided against his family. Quite a man. 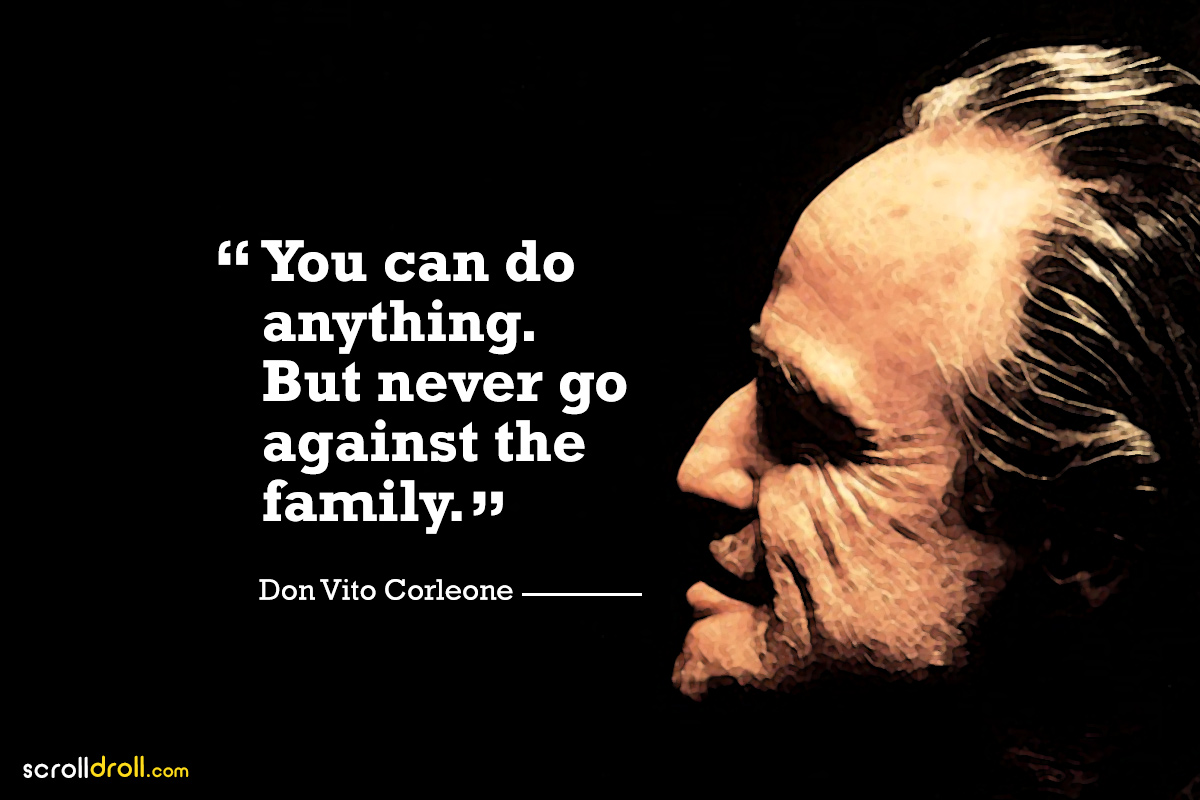 16. Bam! All time favourite Godfather quote. The movie’s quite an ‘offer-making 101’. 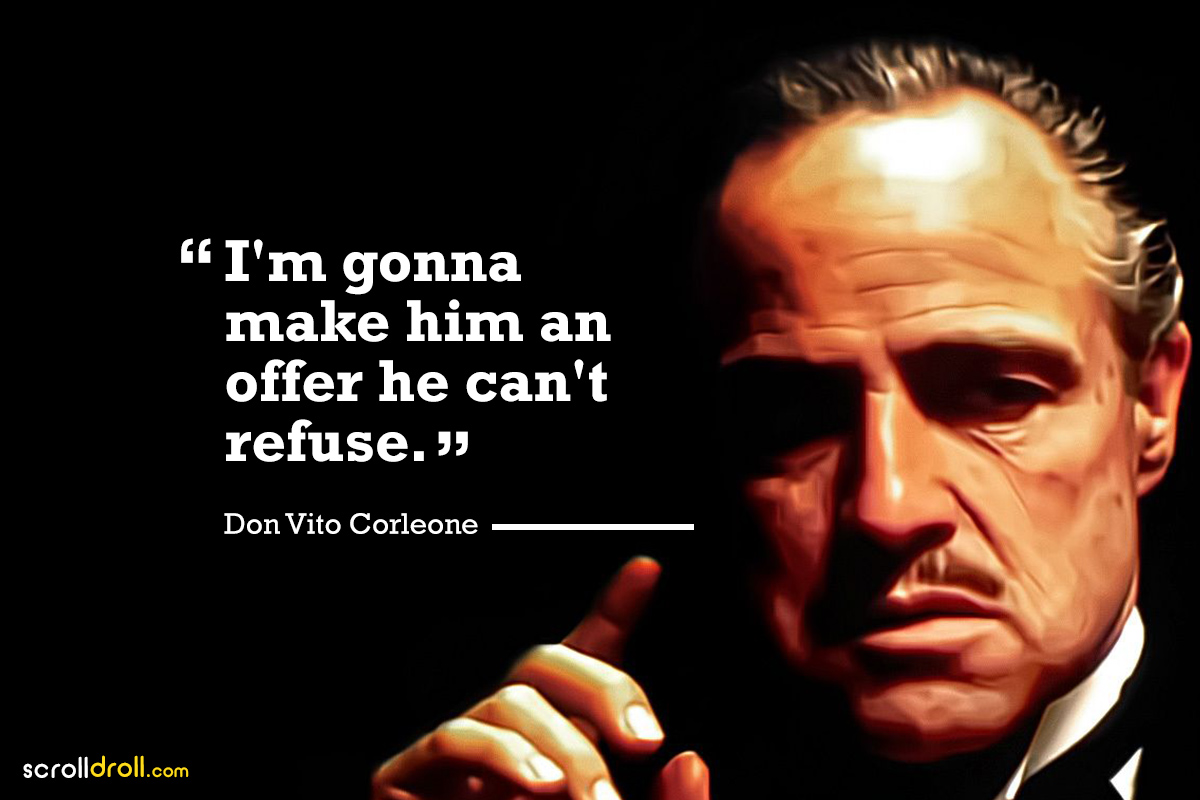 You are really missing out on something if you haven’t seen The Godfather. The movie has a lot of cultural contexts as well and all other ingredients of good cinema – Crime, violence, loyalty, betrayal etc., with some career defining performances. God Father quotes are equally powerful laced with badassery, wit and wisdom.

We offer you to watch the movie and come back here with your favourite dialogues and performances in the movie. Quite an offer…

And if you loved these quotes from The God Father, you would also love reading:
12 Most Badass Hollywood Dialogues Of All Time