The world’s tallest dog appears to be Zeus, a Great Dane. He is the current record holder, and lives in Bedford, Texas, USA. His incredible size measures 3ft 5.18in, and he towers over his siblings at home. His owner, Brittany Davis, speaks lovingly of the world’s biggest dog Zeus, who is known for his gentle nature. 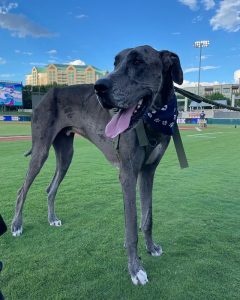 He was an 8-week-old pup when she got him, and is a grey and brown American Great Dane. Ever since she was a child, she had wanted to parent a Great Dane, and luckily, her brother Garrett made her dream come true. He gifted Zeus to Brittany as his colleague used to breed Great Danes.

Something that all owners of Great Danes may worry about is their size, especially if they are living in a household. Although Brittany had similar fears, she loved Zeus from the moment she got him. She remembers always knowing he was a big dog, since even as a puppy, he was big with huge paws. He was the largest pup born to a grey and white merle sire and brindle dam.

His large size intimidates some, especially when the family is out and about town, visiting stores and markets. However, Brittany says that he is a gentle dog and all those who know him are aware of this. He loves taking walks around his neighborhood, visiting farmer’s markets and taking a nap near his window.

The Dallas Farmer’s Market is his favorite place to visit, and he’s got loads of fans there as well! Known faces greet him, vendors give him treats and all the attention is on him when he walks around the place. Therefore, Zeus and his family are used to the stares and looks that he receives from unknown people. 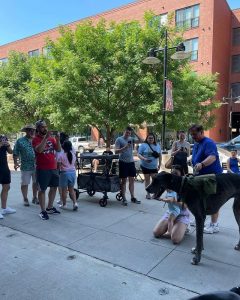 At his own home, he has three other dog siblings who belong to the Australian Shepherd breed. He also has a feline sibling, whose name is Penelope. Although they don’t fight too much, they tend to just maintain peace by not crossing each other’s paths much.

His size is an indication of how much food he requires to be fed in a day. All owners of bigger breeds are aware of this. He requires twelve cups of the dog food “Gentle Giants” and his water bowl is the sink. He is certainly an expensive dog to have, but his owners aren’t complaining. His favourite treats, amazingly, are ice cubes! 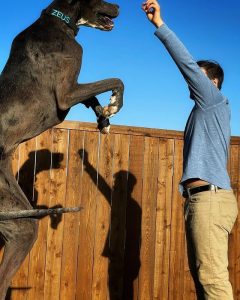 Interestingly, the previous owner of this title and also the world’s tallest recorded dog ever was also a Great Dane named Zeus, from Otsego, Michigan, USA. How cool is that?

Did you know about the world’s biggest dog before today?