One of the important guiding lights of our nation since ages, Mahabharata is not just the story of a great war but also an eternal book of wisdom that has taught the essence of ‘Dharma’ to millions spanning generations. While most of know are quite familiar with the story of this epic, Mahabharata quotes bring out its pearls of wisdom.

We bring you 26 Mahabharata quotes on life, war, karma, dharma and more.

1. “Time creates all things and time destroys them all. Time burns all creatures and time again extinguishes that fire.” – Anukramanika Parva, Adi Parva 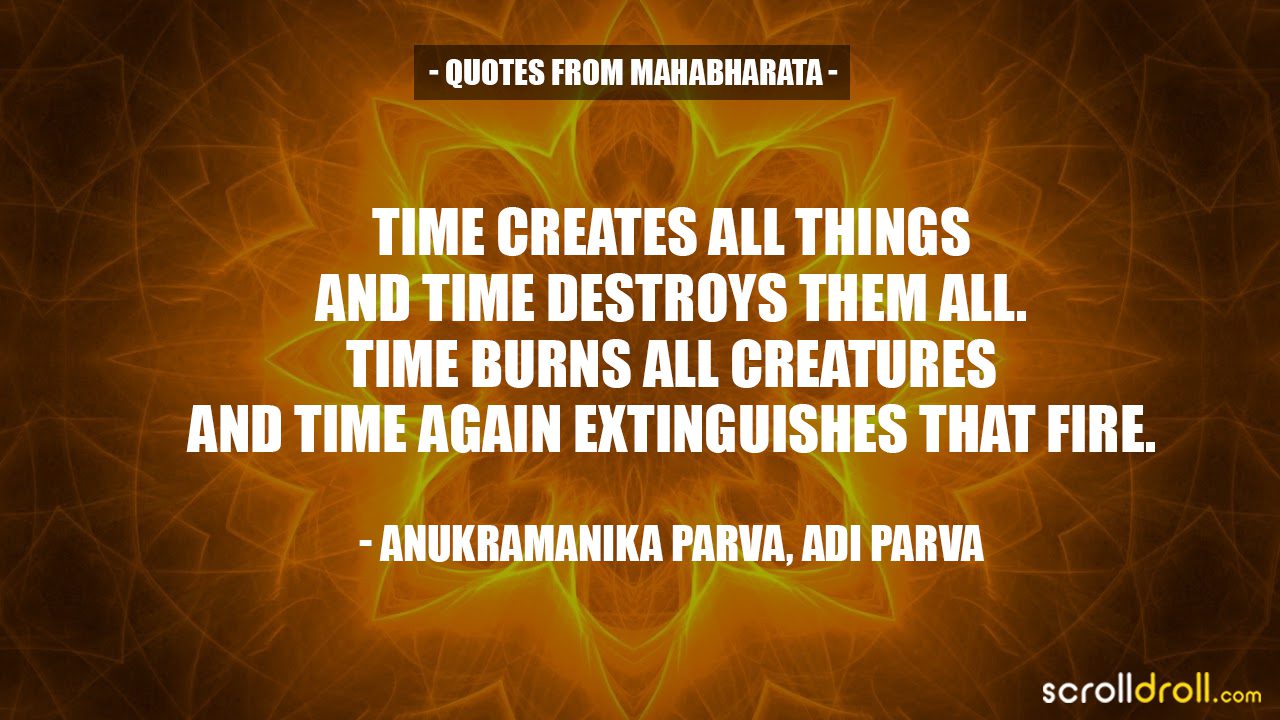 2. “What is a greater happiness to a father than what the father feels when his son, running to him, clasps him with his tiny little arms, though his body is full of dust and dirt.”
– Sambhava Parva, Adi Parva 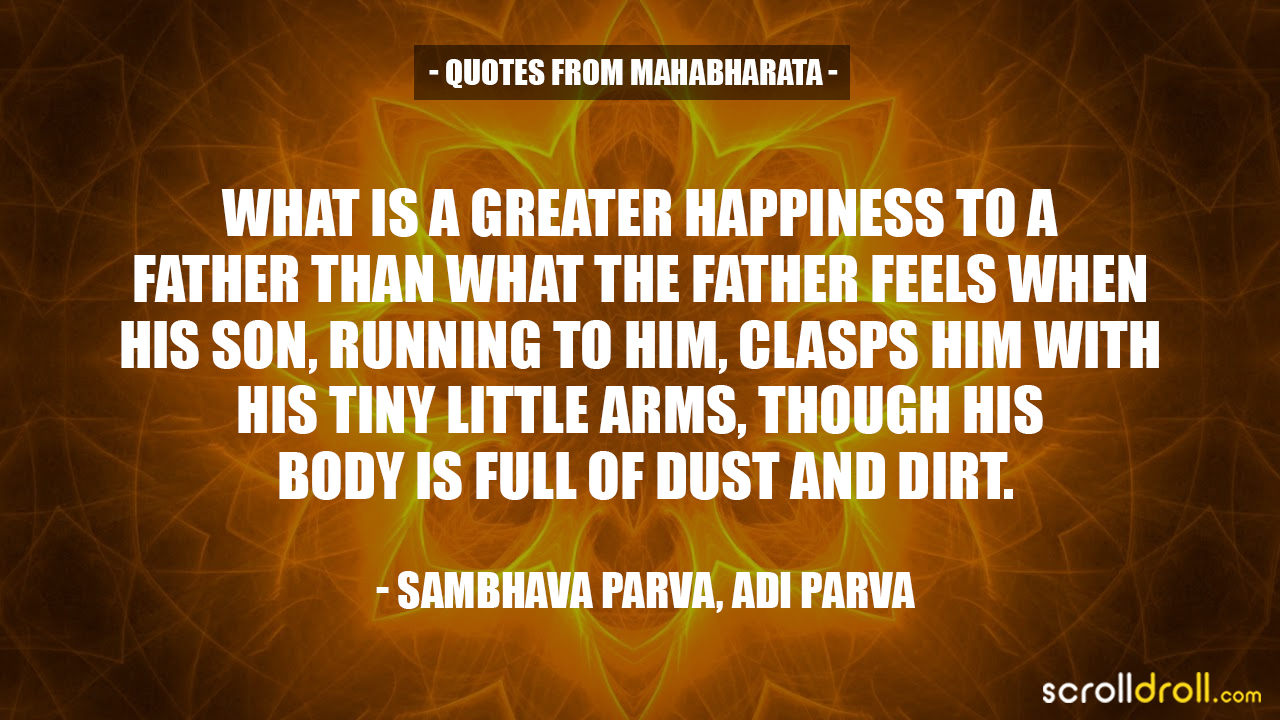 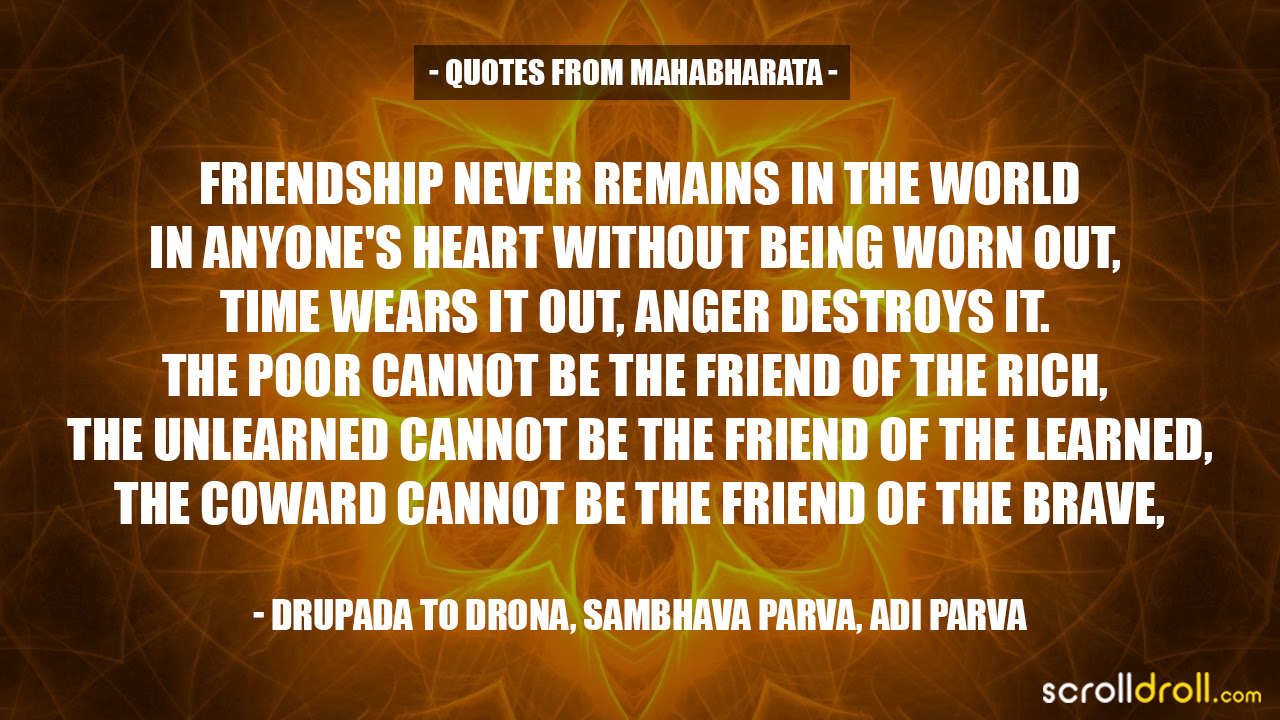 4. “Men of immature understanding begin an act without having an eye to what may happen in future.” –  Rajshuyarambha Parva, Sabha Parva 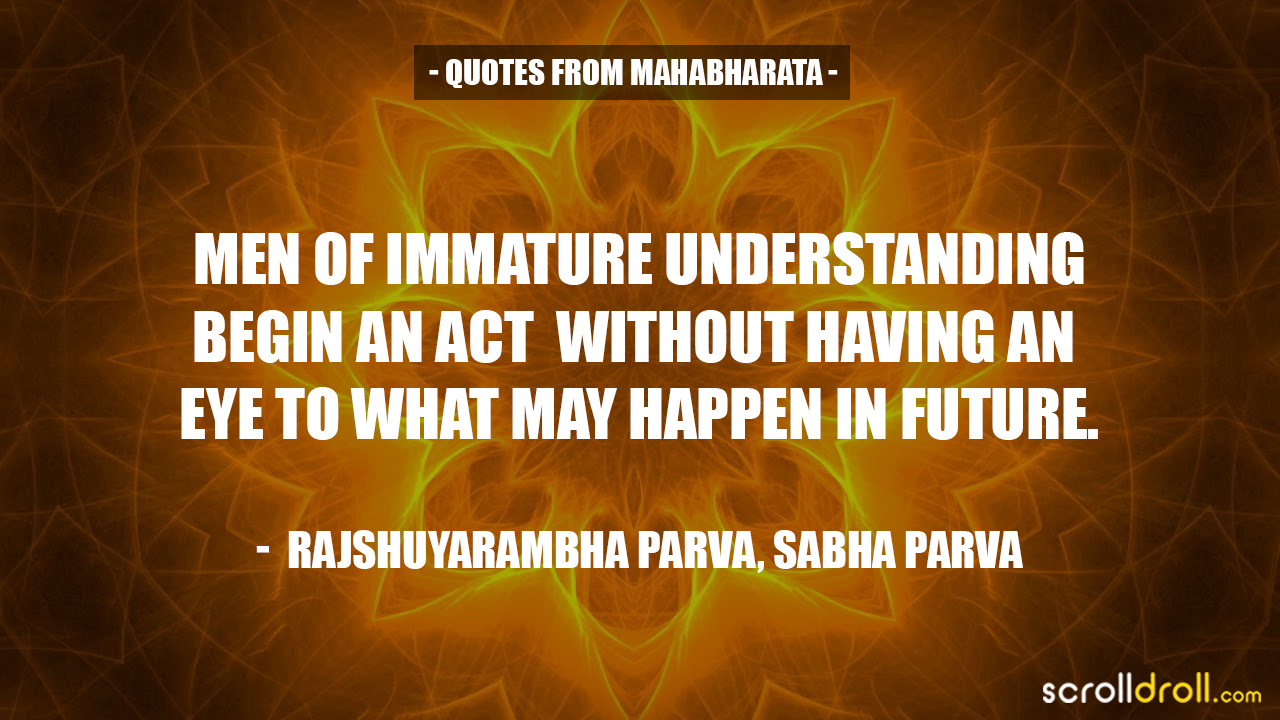 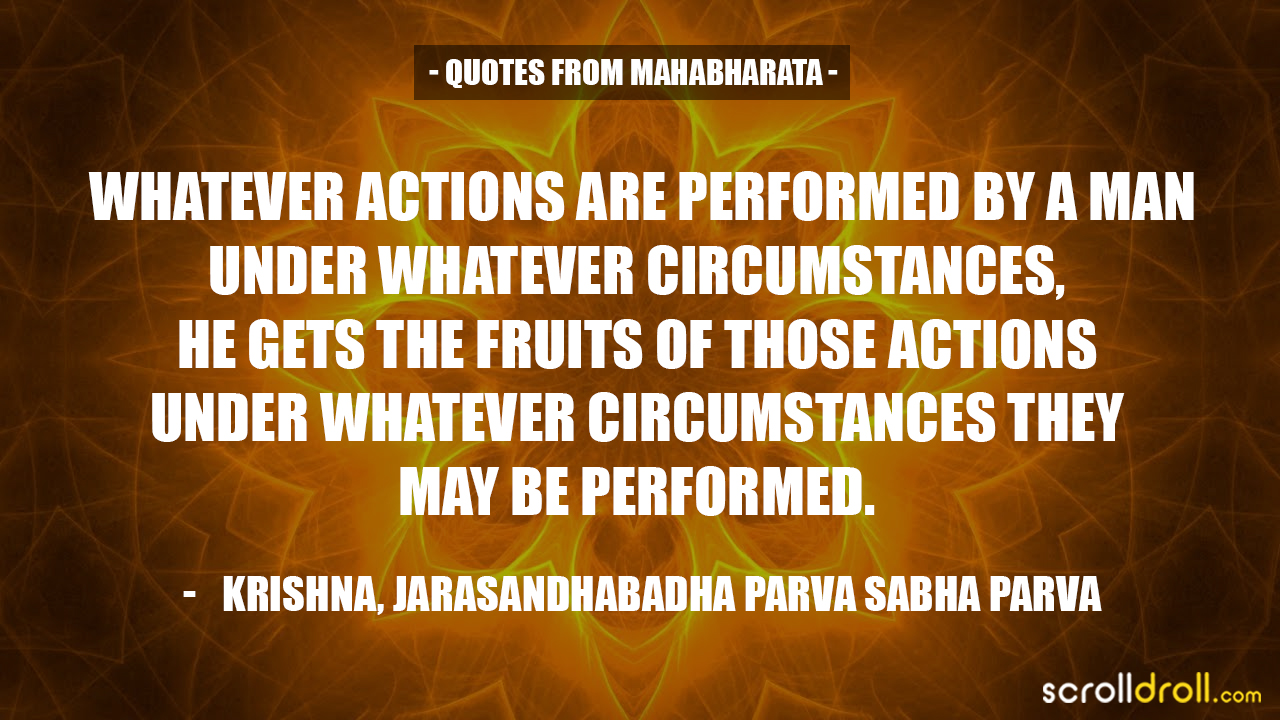 6. Yaksha: What is the invincible enemy of men? What is their permanent disease ? Who is honest ? Who is dishonest ?

Yudhishthira: Anger is the most invincible enemy. Covetuousness is the incurable disease. He who is friendly to all creatures is honest. And he who is cruel is dishonest. –   Araneya Parva, Aranya Parva 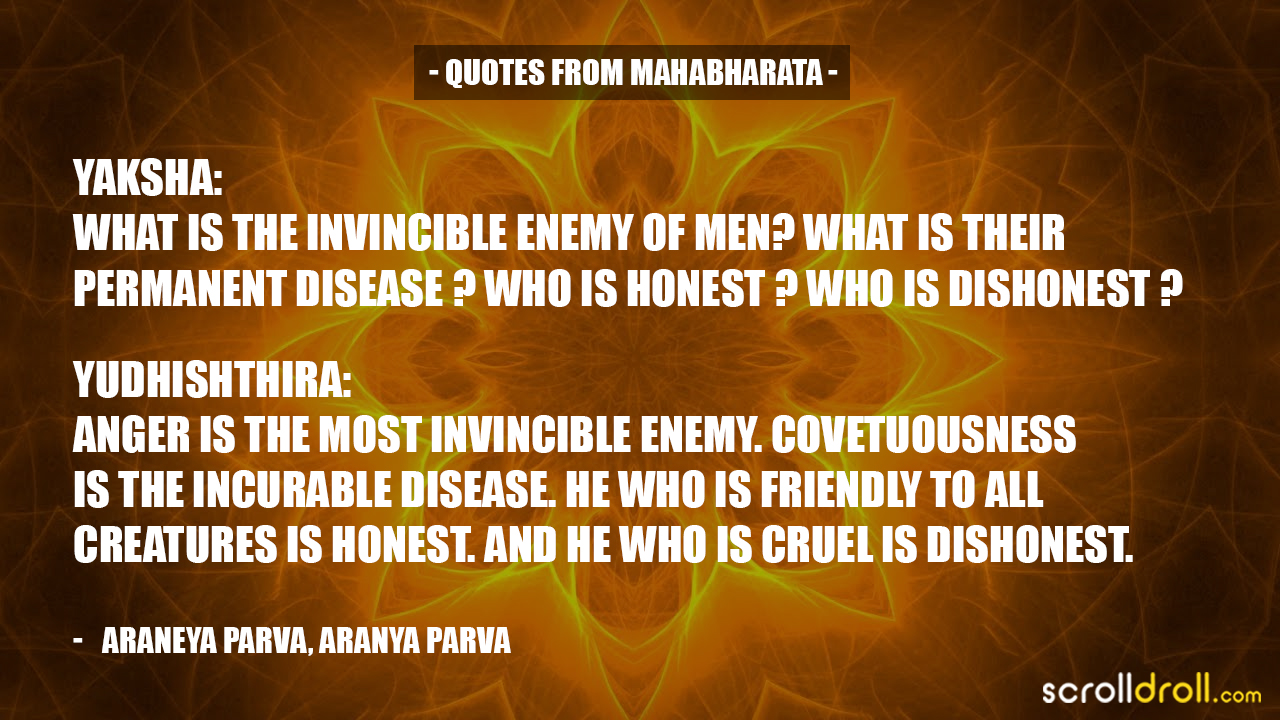 7. Men experience happiness and misery by turn. No man ever enjoys unmixed happiness. A wise man, possessing high wisdom, knowing that life has its ups and downs, is neither filled with joy nor with grief. When happiness comes, one should enjoy it, and when misery comes one should bear it. –   Vrihi Drounika Parva, Aranya Parva 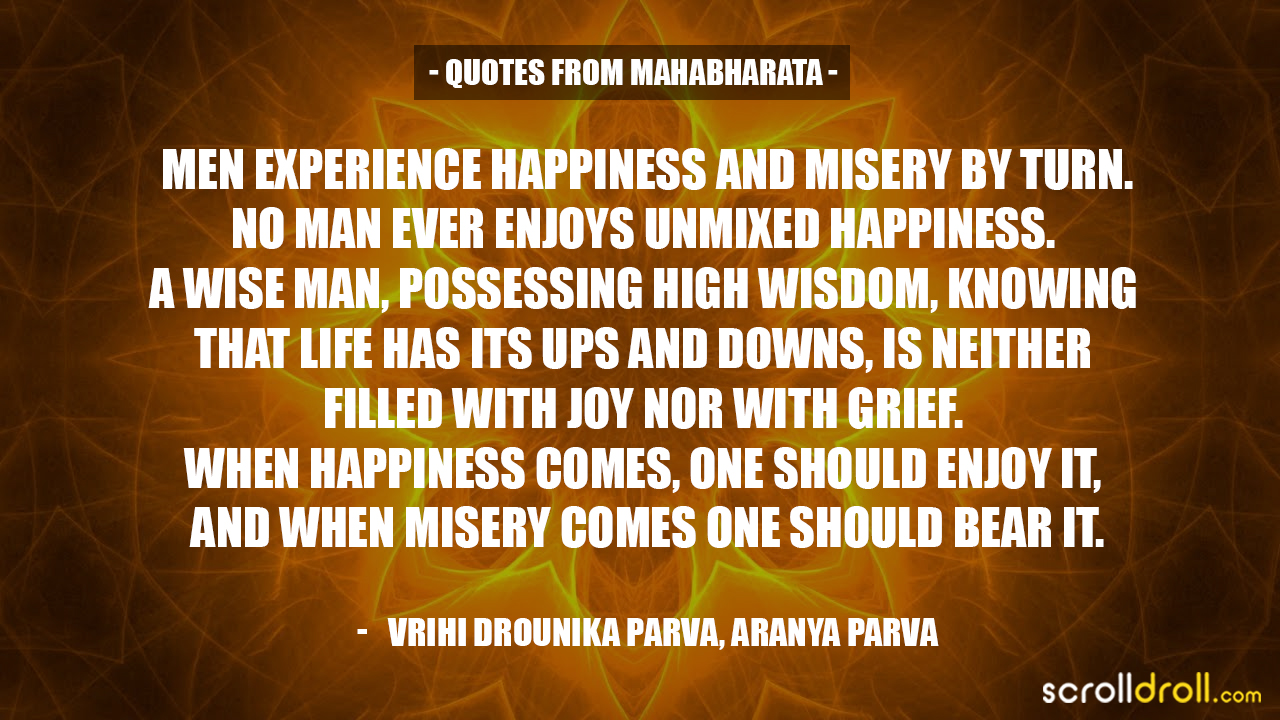 8. Pleasant looks, cheerful heart and sweet words are due to a guest. Rising up, the host should advance towards the guest; he should offer him a seat, and duly worship him. This is the eternal Dharma. –   Aranyaka Parva, Aranya Parva 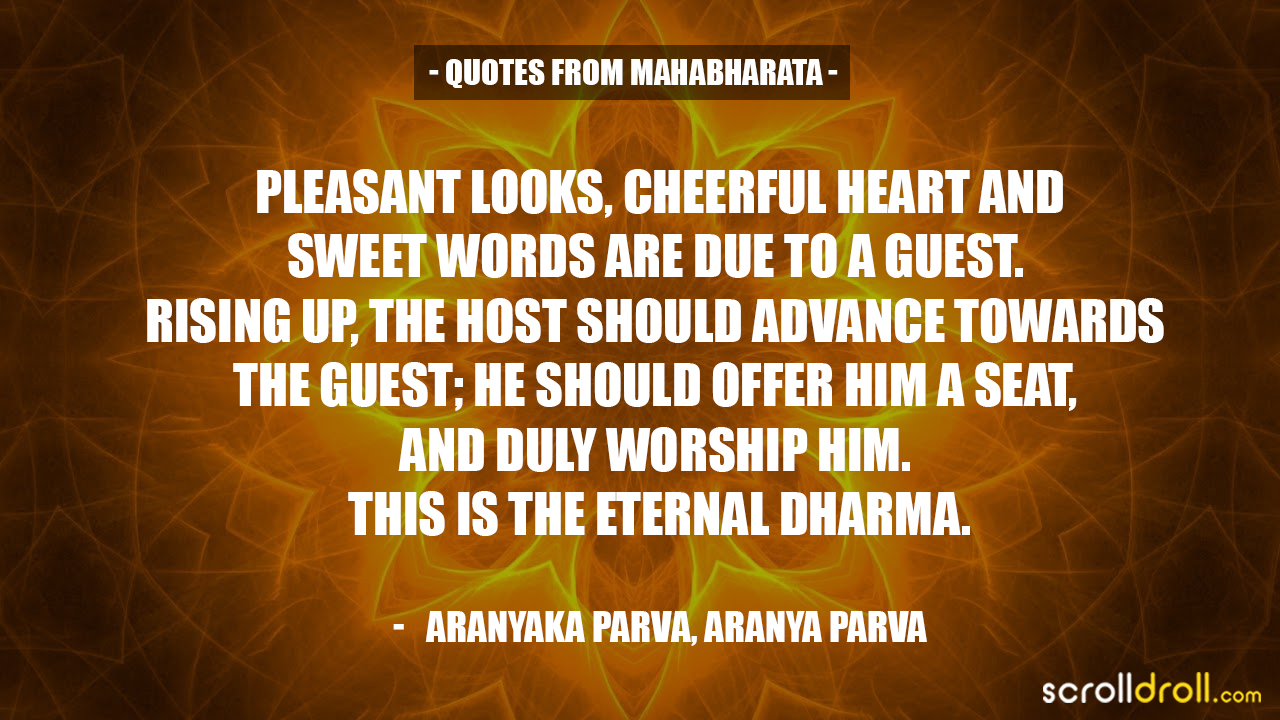 9. “Anger is in this world, the root of the destruction of mankind, The angry man commits a sin; the angry man murders his preceptor; the angry man insults his ciders with harsh words. The angry man cannot distinguish what should be and should not be said by him. there is nothing which cannot be said or done by an angry man. ”
–   Yudhishthira, Arjunabhigamana Parva, Aranya Parva 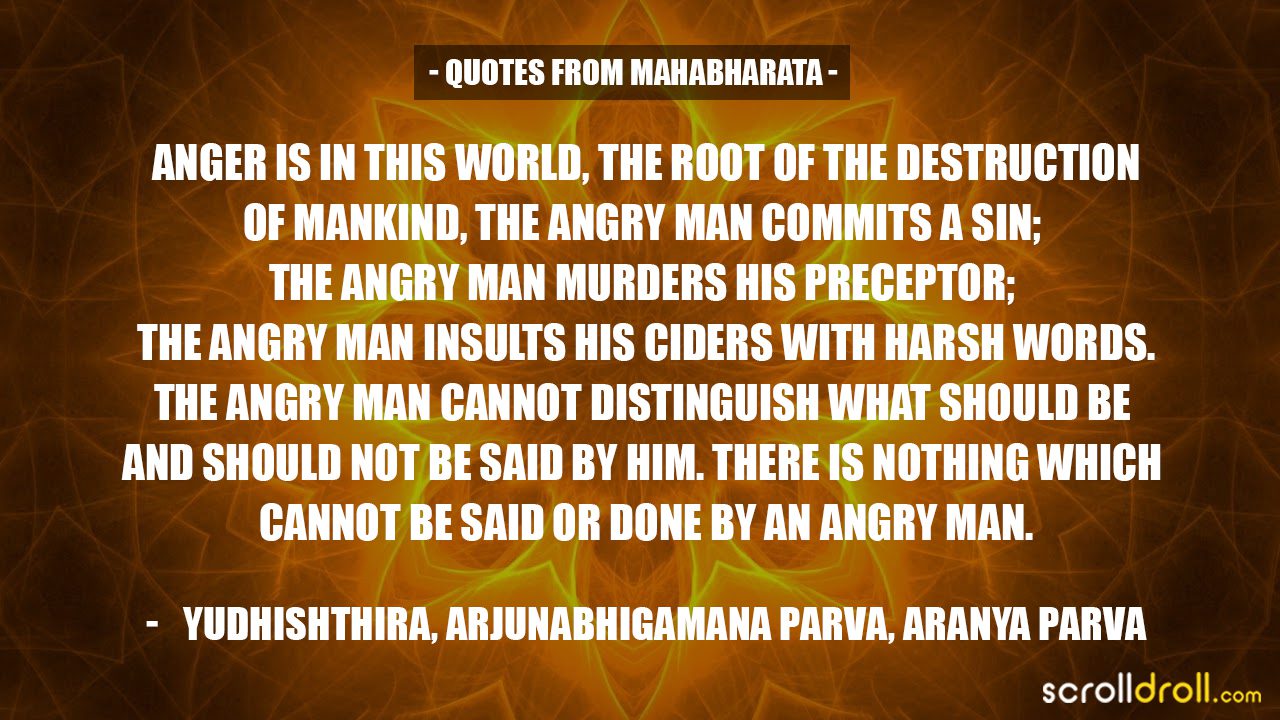 10. “A wise man should never contract friendship with the wife of the king nor with other attendants of his, nor with those whom he despises and who are hostile to him.”
–   Pandava Pravesha Parva, Virata Parva 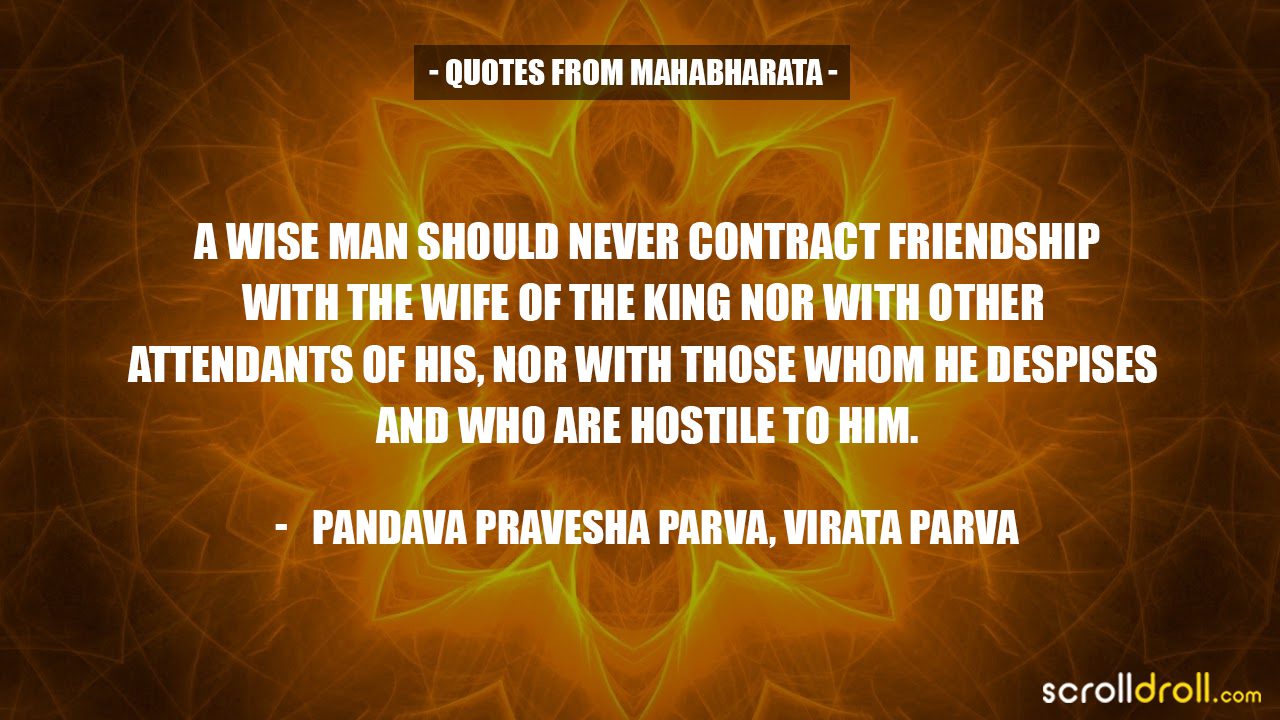 11. “War causes destruction to all, it is sinful, it creates hell, it gives the same result in victory and defeat alike.”-   Sanjaya, Udyoga Parva 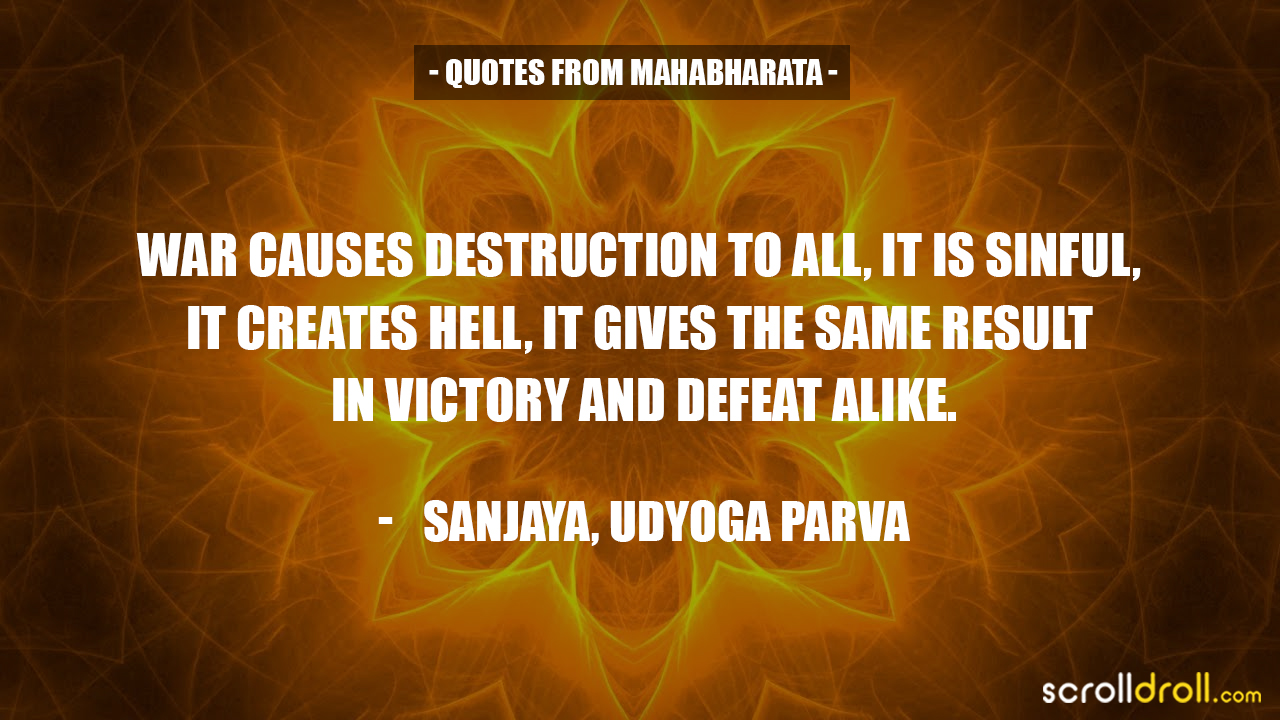 12. “Wrath is a bitter remedy for evils, it causes malady in the head, destroys fame, and is a source of sinful acts. It ought to be controlled by a good man and those that do not control it are bad men.”  –   Sanjaya, Udyoga Parva 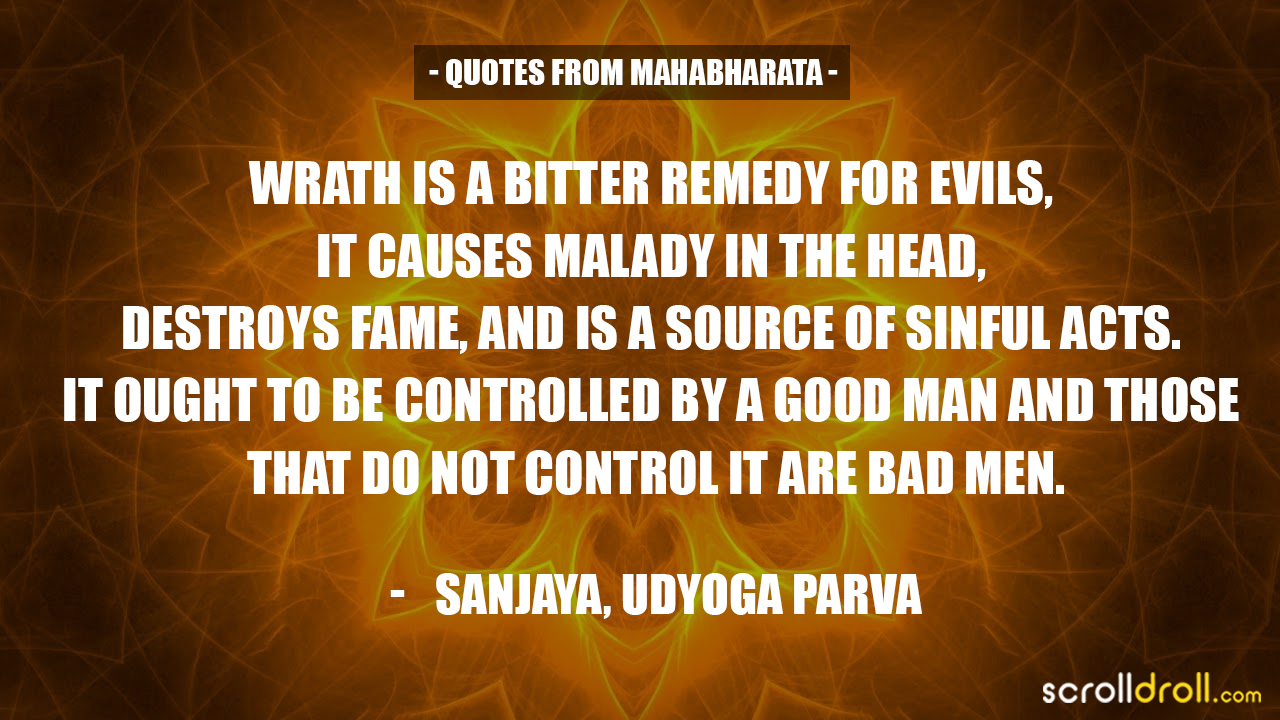 13. “The body of a man is like the chariot; his soul, the driver; and his senses, the horses. Drawn by those excellent steeds when well trained, he that is wise and patient, performs life’s journey in peace.: –   Vidura, Udyoga Parva 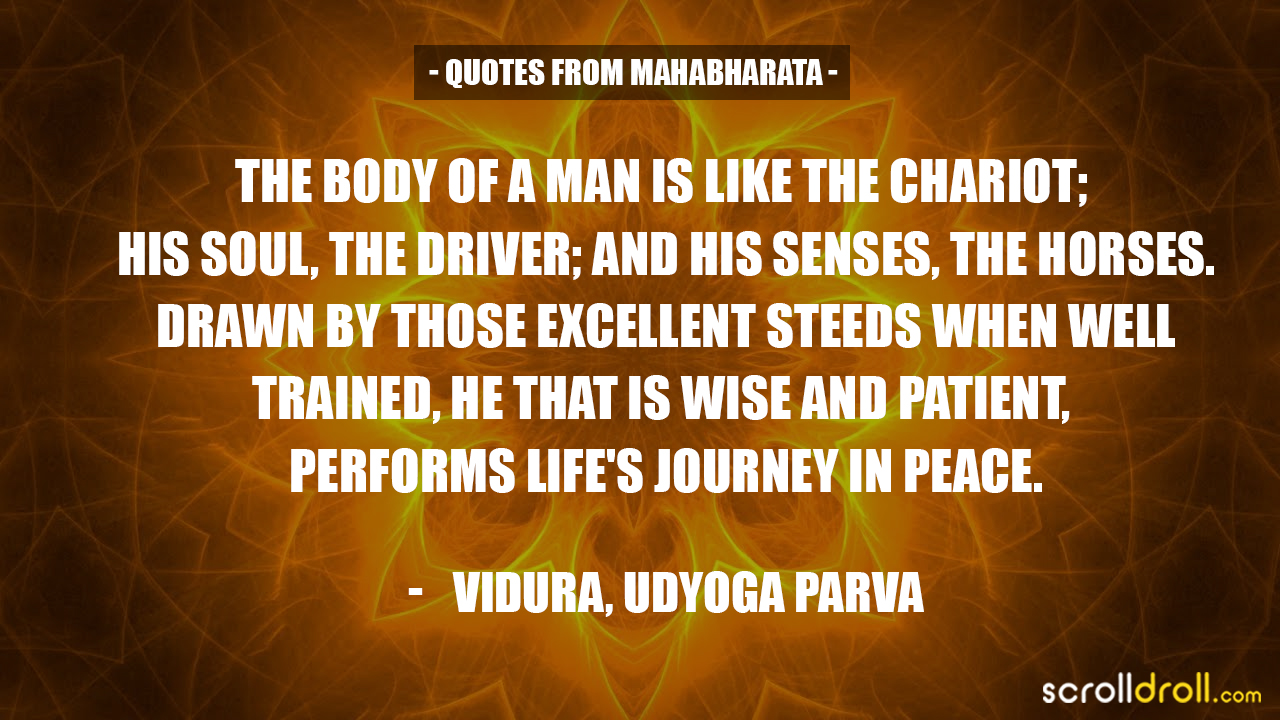 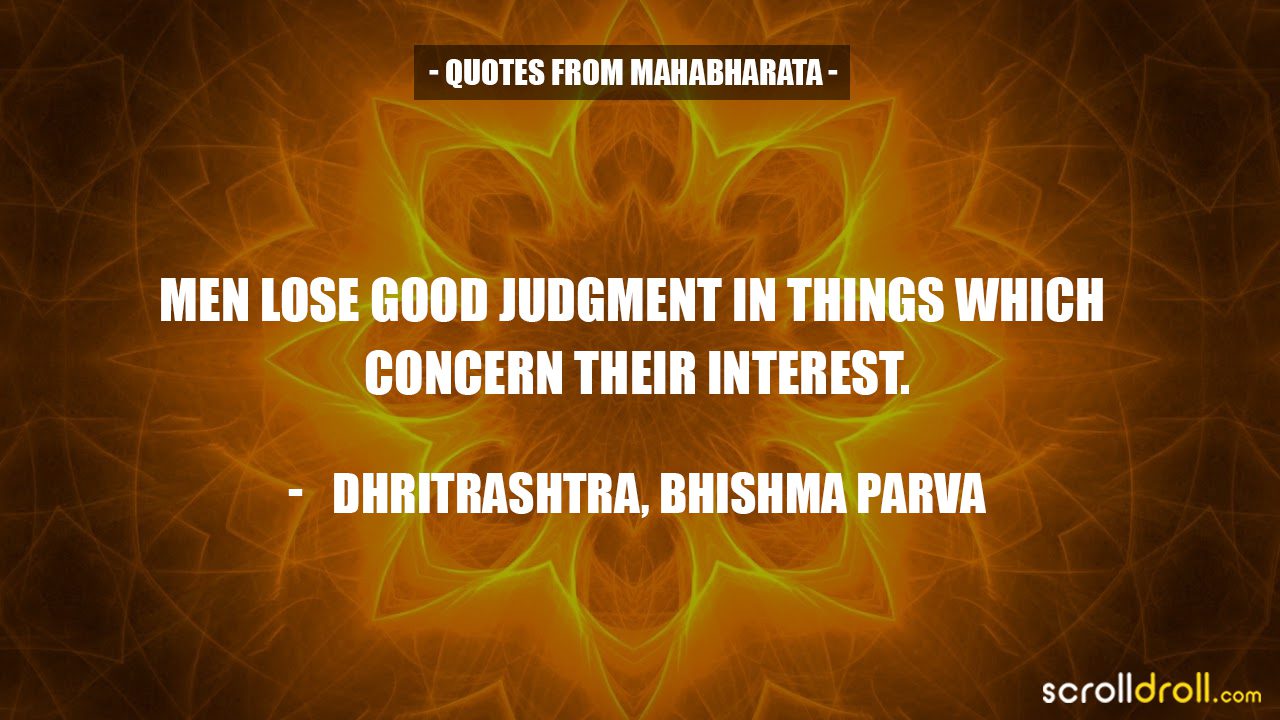 15. “Success that is obtained by negotiations and other means is the best. Success which is secured by creating disunion amongst the enemy is temporary. Success secured by battle is the worst.” –    Vyasa, Bhishma Parva 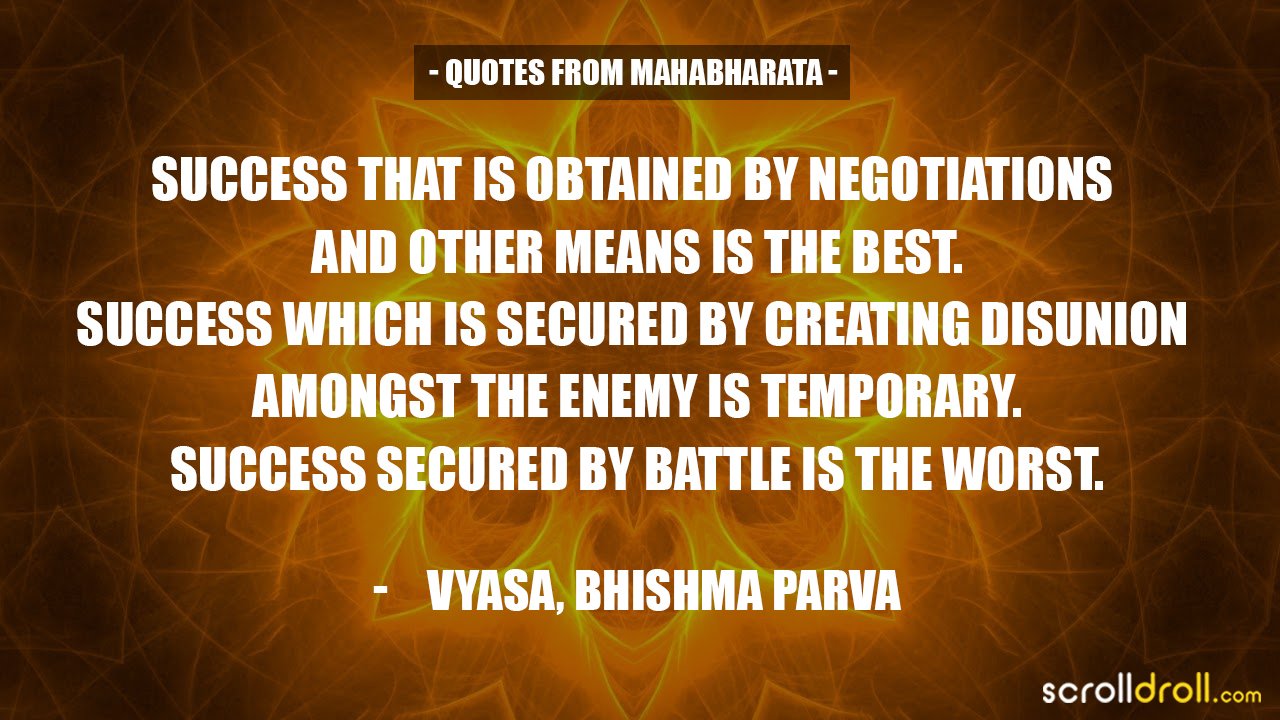 16. “There are many evils in battle: the first and the foremost is slaughter. Victory is always uncertain. It depends on chance. Even those that obtain victory have to suffer losses.”
–    Vyasa, Bhishma Parva 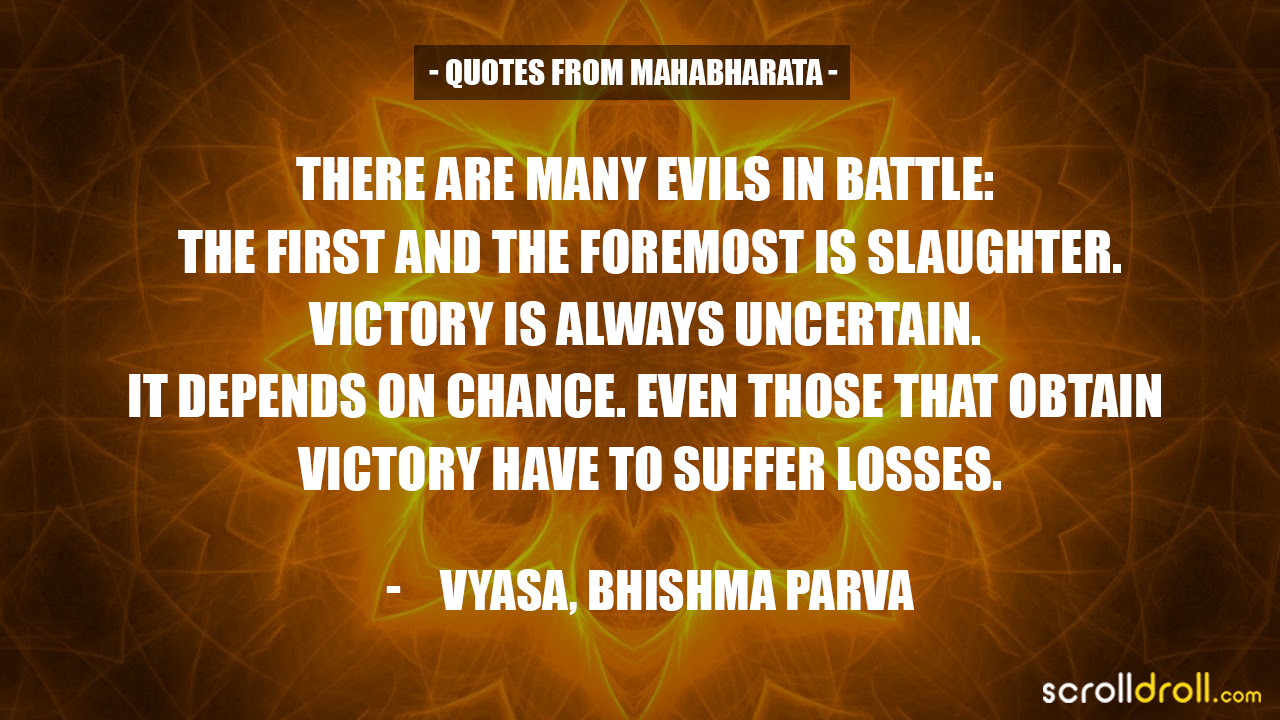 17. “The man who suffers evil for his own misconduct should not attribute it to others.”
–    SANJAYA, Bhishma Parva 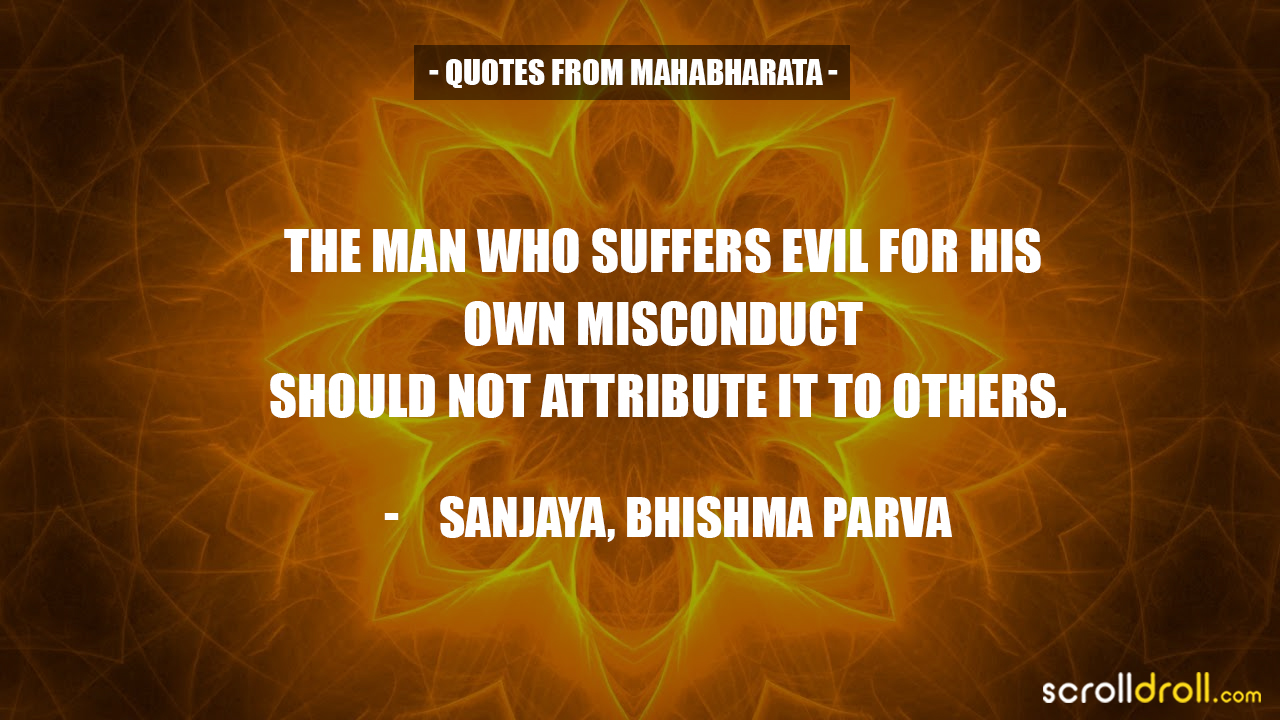 18. “They that are desirous of victory do not so much conquer by might and prowess, as by truth, compassion, piety and virtue. Fight without any arrogance, for victory is certain to be there where righteousness is.” -  Sanjaya, Bhishma Parva 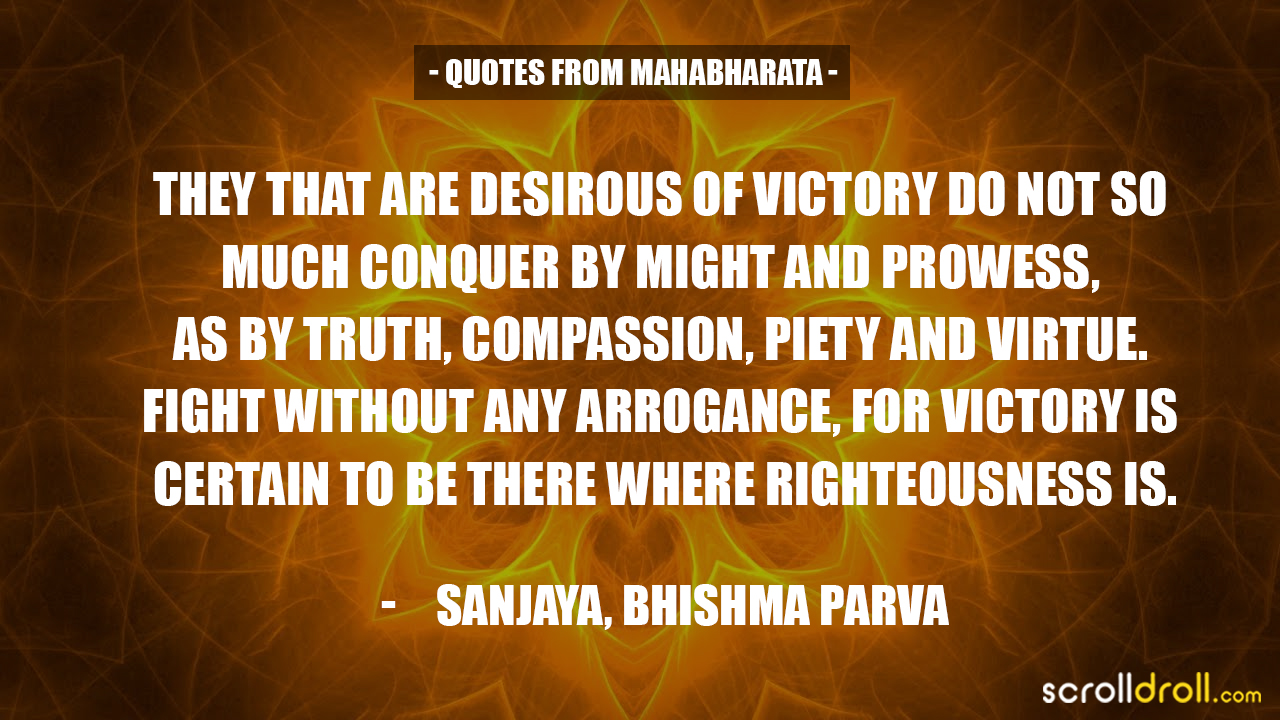 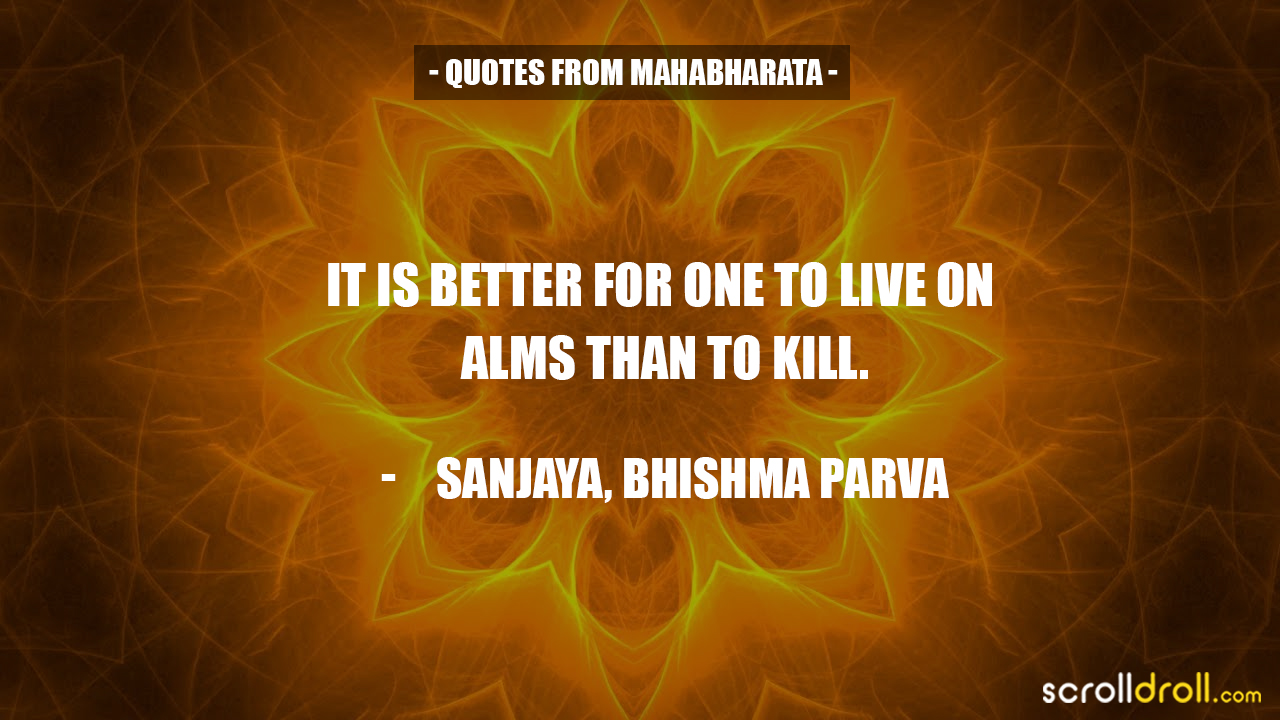 20. “In this world, the relationship between the virtuous is more important than a relationship resulting from birth.” –    Bhishma to Karna, Drona Parva 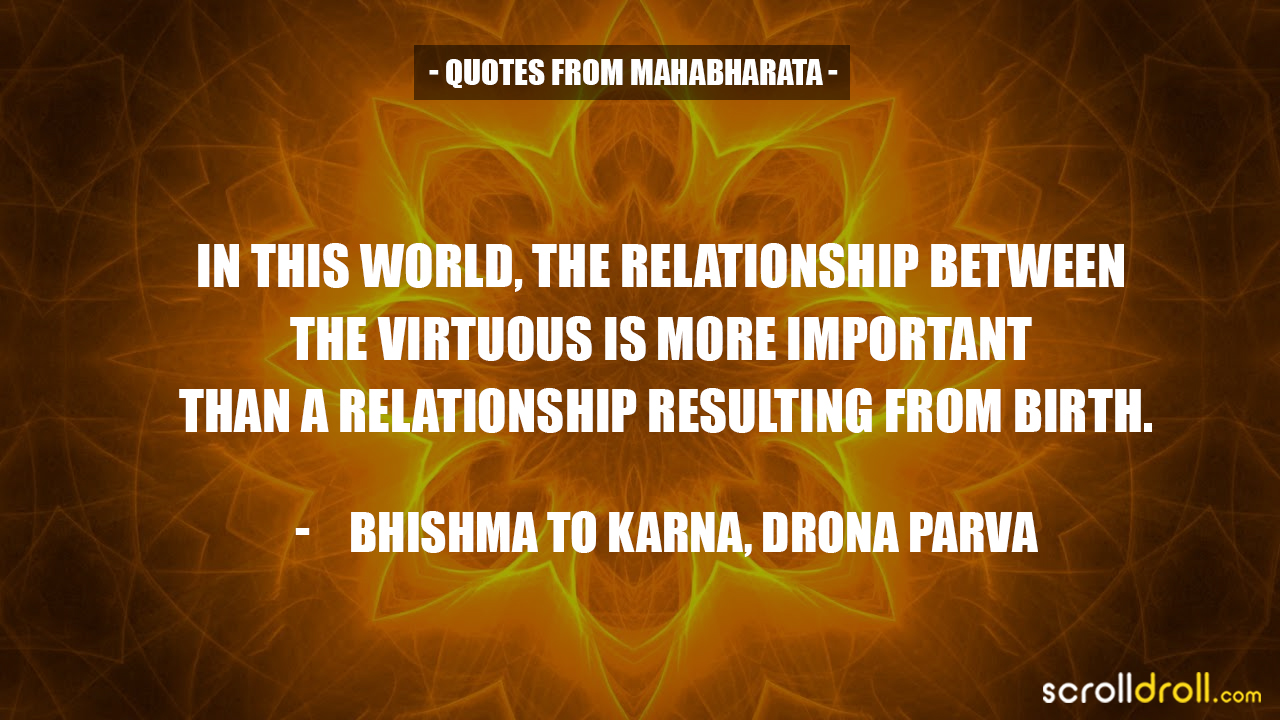 21. “Men that are heroic, virtuous and most exalted, having defeated an enemy, neither boast of themselves with harsh words, nor indulge in abusive language.” –   Sanjaya, Drona Parva 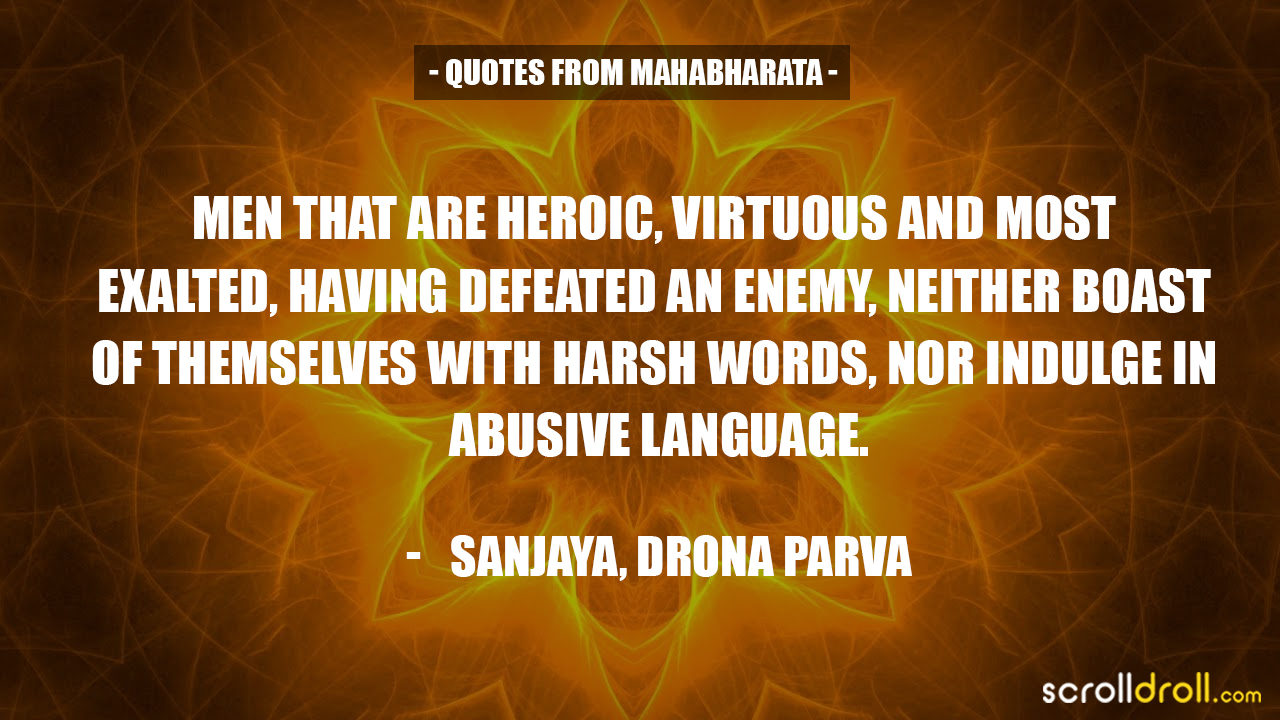 22. “Passion, engagement, skill and policy – these are the means to accomplish objectives.”
–   Ashwatthama, Karna Parva 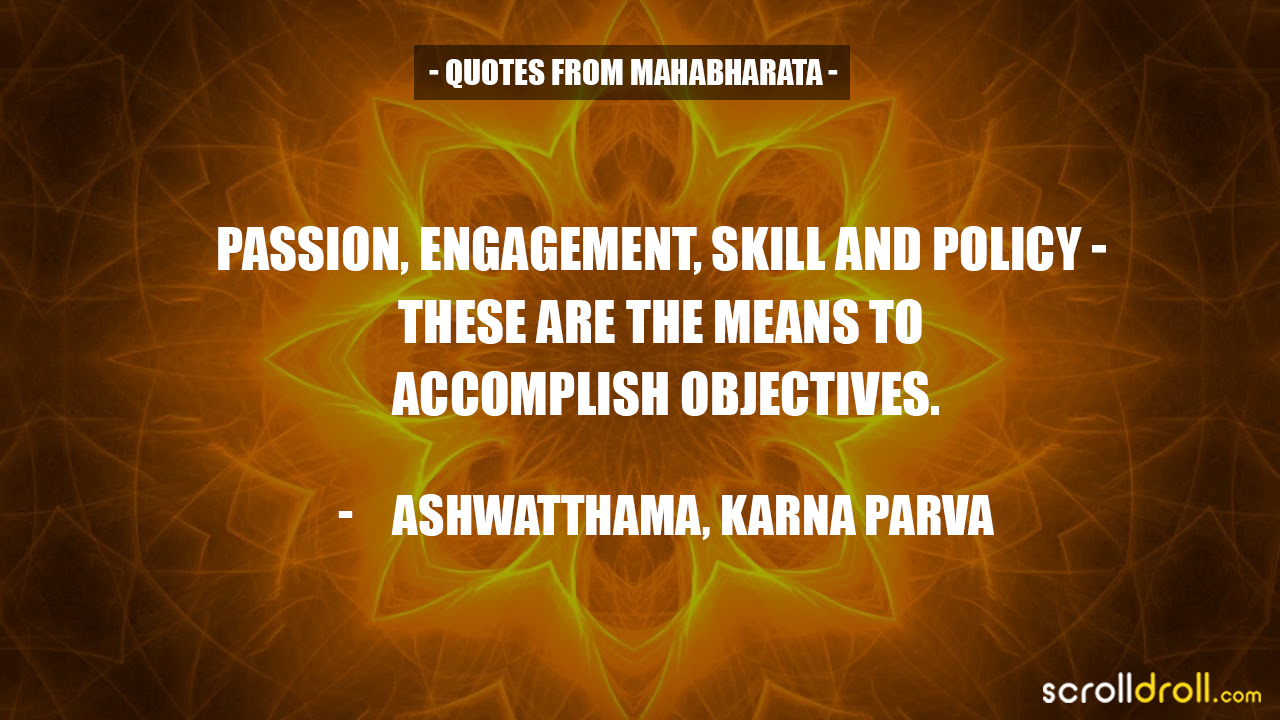 23. “Many people maintain that morality can be learned from the scriptures alone; I do not find fault with that, but then everything is not provided in the scriptures. Moral precepts have been made for the well bring of all creatures. Moral precepts have been made to free the creatures from all injuries. Dharma – morality – is so called because it protects all. Morality saves all creatures. That is moral that keeps creatures from injuries. An untruth spoken to save creatures from injuries is in the cause of morality, and does not amount to a falsehood.”
–    KRISHNA, Karna Parva 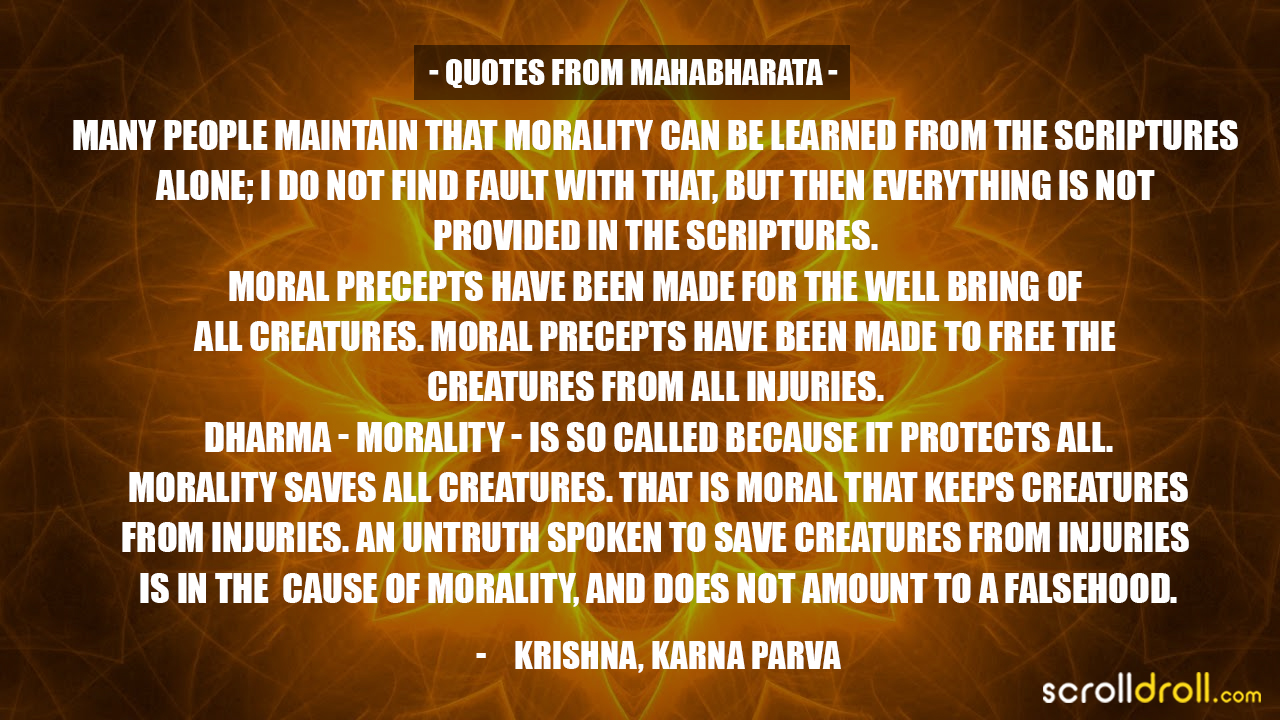 24. “Sorrow comes after happiness, and happiness after sorrow; One does not always suffer sorrow, nor always enjoy happiness.” –  Vyasa, Shanti Parva 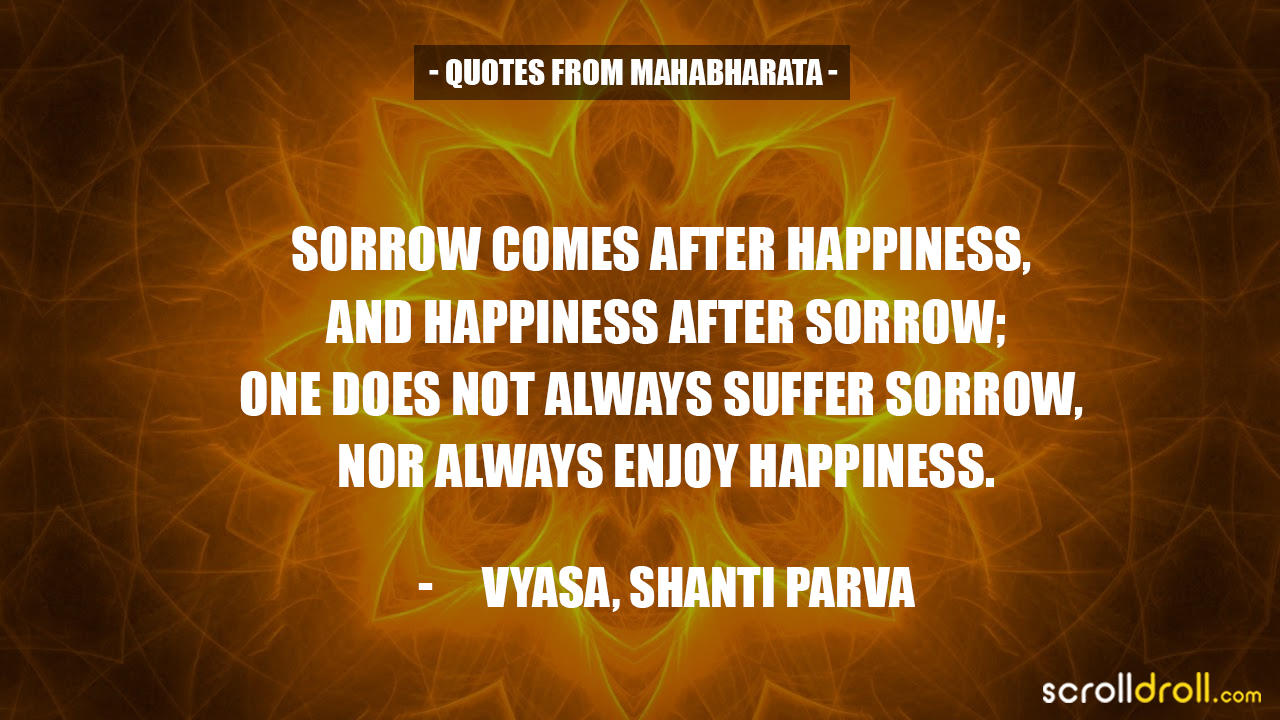 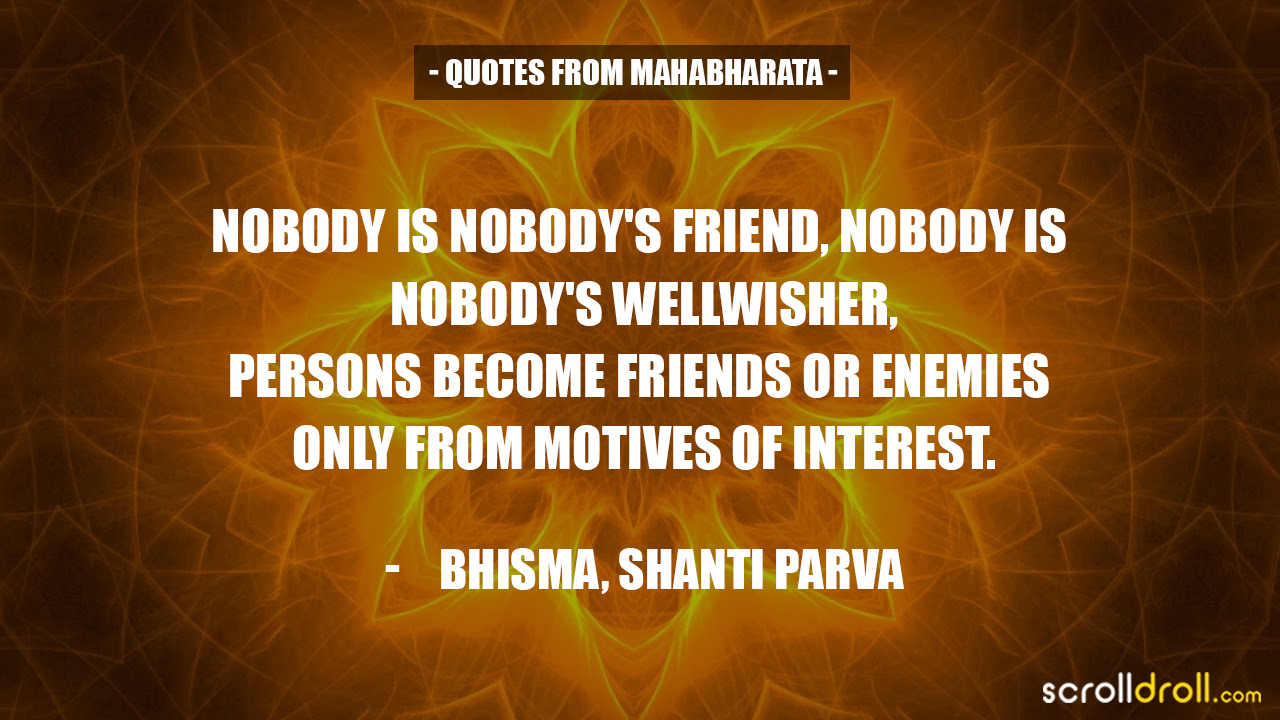 26. “A person should never do that to others, which he does not like to be done to him by others.”
–  Bhisma, Shanti Parva 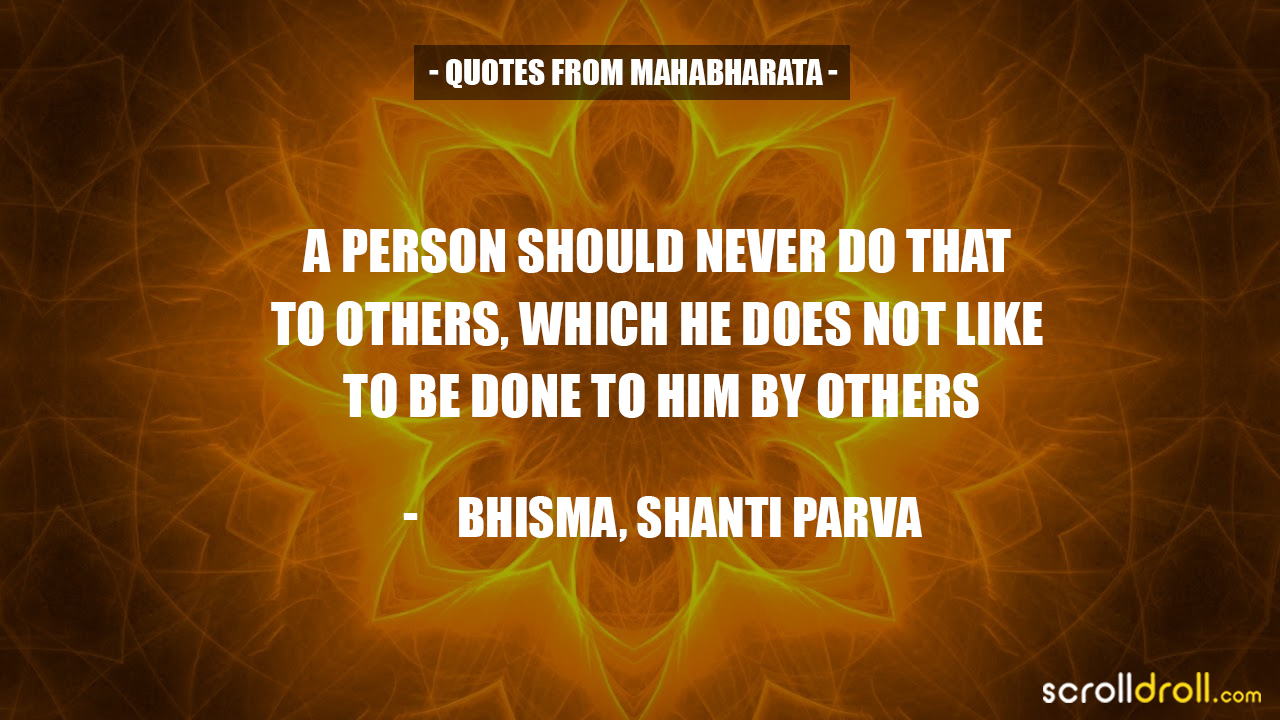 These are only a few Mahabharata quotes from the thousands of slokas and verses of this epic – each a treasure of wisdom, knowledge, inspiration and insights. We suggest you to actually read the whole book, if you have the time and patience to understand the philosophy of ancient Indian culture in detail.

Do you know of any other important Mahabharata quotes we missed out? Do let us know in the comments below.